Let There Be Light: The One-Hour S550 LED Upgrade 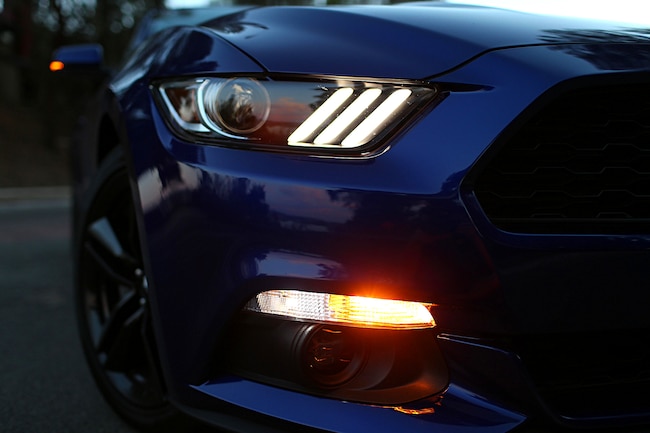 LED lighting could possibly be one of the most affordable and effortless ways to accentuate the styling of your Mustang. You might not know how much better your lighting can look, on the inside and outside, until you make the change. Sure, a brownie sundae is edible if you’ve never had a cherry on top, but once it’s there it’s something you can’t ever live without. Enter the one-hour LED lighting upgrade with Diode Dynamics.

“Incandescent bulbs illuminate using a filament, whereas LED bulbs utilize LED chips to emit light,” explains Tara Anderson of Diode Dynamics. “LED bulbs have many benefits compared to standard incandescent bulbs, including lower energy consumption and less heat generation. This is especially useful in automotive applications, where the bulb might be placed near a lens or lamp housing.”

LED lighting technology is a truly win-win scenario once the investment has been made. They last longer, consume less electricity, and, unlike traditional bulbs, don’t emit heat that’s hotter than the surface of the sun, which reminds us for our first tech tip: Make sure all the lights are off before removing them to avoid risking your tender finger meat to those little scorching-hot infernos. If we sound sour, it’s because we didn’t heed our own advice. This is the part where we tell you that you should disconnect your battery before starting this installation. Also in the same regard, test that the bulbs work before reassembling everything.

“While standard incandescent bulbs normally burn out after 600 hours, LEDs have an expected lifespan of over 40,000 hours,” says Anderson. “Diode Dynamics design all our LED lighting products from start to finish in-house, using modern, computerized equipment and only the best components to ensure uniformity, fitment, quality, and long bulb life. All lighting products are fully tested and measured to ensure the exact color, true lumen output, and compliance for on-road use. Furthermore, we test all our products on vehicles directly in our on-site test garage to ensure final fitment, compatibility, and long-term reliability.”

Our specimen for this installation was a local college kid who recently purchased his first car, a new 2015 Mustang EcoBoost Premium. A product of Ford’s marketing design, Chris Alonzo fell in love with the looks, power, and affordability of the EcoBoost Mustang. Also being new to performance vehicles, Alonzo was looking for a way to get his toe in the preverbal modification pool. Diode Dynamic’s LED kits were the perfect choice. The parts can easily be installed with simple handtools, and installation can be done in an hour or less. Better yet, the LED upgrades weren’t going to void his factory warranty; this thing still has the temporary registration on it.

1. From the outside, the S550 Mustang’s front turn signals are normally illuminated by two orange bulbs behind a clear housing.

2. The rear corner markers house a clear bulb behind a red reflector, though the light doesn’t disperse well within the housing and is fairly concentrated at the center.

3. Warm lighting looks good in a home but dated in a car. The inside of the S550 is the best design Ford has ever made, but not upgrading the lighting kills the interior’s mood at night.

5. The only tools needed for this installation are a Phillips-head screwdriver, a fine-blade flathead screwdriver, and needle-nose pliers. Start by popping out the vanity light covers from the inside portion nearest the mirror. Behind the covers are two Phillips screws on either side. Pull the mirror assembly out from the top down.

6. The bulbs simply pull out. You can activate the lights (shown) before reassembling the mirror assembly. Repeat the process on the passenger side.

7. No tools are required to remove the map light housing from the headliner. Pull down and back from the backside of the housing and it will pop out.

8. Squeeze both sides of the bulb socket and pull to remove. Easily replace both bulbs with their LED counterparts and snap the map light housing back in place.

9. To keep yourself from pulling some awkward, upside-down Yoga pose to get the glovebox bulb out, simply use the front camera on a smartphone to target the bulb’s location. There’s no lighting cover, so this one is snap. Remember when we talked about burning ourselves earlier? Yeah. This guy.

10. The final piece of the interior lighting kit is the trunk LED. There’s a tab you depress on the driver side of the housing with your fine-blade flathead screwdriver. Again, replace the bulb, snap the housing back in place, and you’re good to go!

11. The most disassembly we had to do on any of the pieces was on the sequencer harnesses. The large plastic panels behind each of the taillights are attached by screw tabs on each corner.

12. With the panel unscrewed, pull up and slightly back. The entire black plastic piece will unclip. You don’t need to remove it completely, just back enough to give space to install the sequencer modules. You can see the tabs next to the trunk lock that will unclip

13. The installation of the taillight module couldn't be easier. Unclip the harness and plug the new module inline. After both sides are complete, reinstall the rear cover and screw tabs.

14. At the 40-minute mark we moved to the rear side markers. Nothing needs to be removed to get to these. Looking between the fender liner and muffler, squeeze the tab on the back of the marker light (shown) and push out. There is a rear retaining tab too, so slide the marker housing forward to remove.

16. The final lights to be installed are the front switchbacks. The three plastic retainer clips will need to be removed to access the light. We turned in the wheels as well to give us more room. With one arm you can pull back the fender liner and reach in to change the bulbs with the other.

17. The big brown plug is where you’ll install the large switchback bulb with the gray plug housing the smaller LED. Both sockets are removed by turning counterclockwise. The bulbs pull straight out of their housings. “Our Switchback LED bulbs are constructed using two different color LED chips, which allow you to create a unique switchback effect for different functions,” says Diode Dynamic’s Tara Anderson. “Our Switchback LED turn signal bulb illuminates in a bright white when your parking lights are on, but then illuminates in a brilliant amber when the turn signal is engaged. The bulb switches back to a bright white once the turn signal is disengaged.”

18. The biggest exterior improvement comes from the switchback upgrade. The front corner markers are much cleaner, and the switchback bulbs make the Mustang feel more high-end. Plus, they are super cool to look at.

19. The LED light panels in the rear side markers better illuminate the entire housing to give a more uniform look and are brighter overall.

20. The LED interior lights are brighter and softer than stock. The cool blue appearance gives the Mustang a much more modern interior appearance. The interior lighting kit was our favorite upgrade out of the entire set.