Rally ’Round the Pac: How to install a Scott Drake Reproduction Rally-Pac in 1965-1966 Mustangs 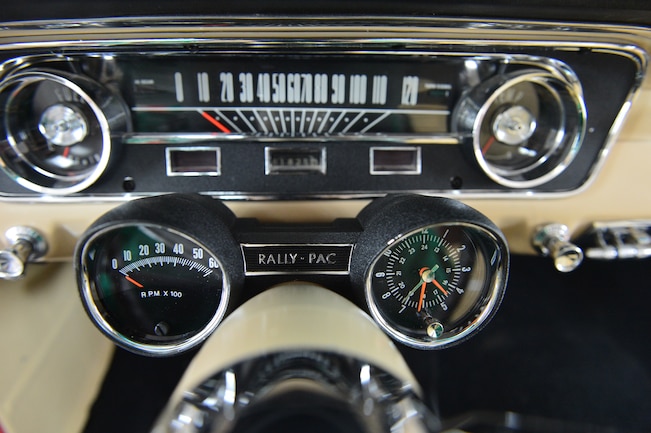 When the Mustang came out in 1965 (or 1964½, whichever you happen to consider the first Mustang), one of the optional accessories was a Rally-Pac that mounted a tachometer and clock on either side of the steering column in front of the dash gauges. It got its name after Ford’s success with the Monte Carlo Rally. It was also available for 1964 Falcons and Fairlanes, but is mostly seen on 1965 Mustangs now—when you can find one.

Nineteen Sixty-five Mustangs with the horizontal speedometer and warning-light cluster had the clock and tachometer pods mounted slightly higher from centerline than versions fitted to cars with the five-dial gauge cluster using a round speedometer, such as those equipped with the GT performance and Interior Décor package. The tachometer on versions intended for use on cars with six-cylinder engines or base model V-8 engines measured up to 6,000rpm, while a rare 8,000rpm version was used for cars equipped with the Hi-Po 289ci V-8. Originals are hard to find, and when you do, they often need restoration. Thanks to Scott Drake, though, you can buy brand-new reproductions that are super-easy to install.

The 1965 convertible we’ve been working on with Jason White at Jason White Restorations in Hereford, Texas, did not come with a Rally-Pac, so we got one from Scott Drake to upgrade the car. When we pulled the unit out of the box, we were stoked it felt weighty like the original, a result of using a zinc die-cast housing coated like the original with wrinkle texture paint.

01. Scott Drake’s reproduction Rally-Pac comes with instructions, mounting brackets, and color-coded wiring. This is part number C6ZZ-10B960CBK with a 6,000rpm tachometer ($389.95, suggested retail), but you can also get them with an 8,000rpm tach, both with a white exterior finish.

02. The clock and tachometer faces are copies of Ford’s original Rally-Pac of 1965. Internals, however, are modern. The tach features an air core movement, and the clock is quartz digital.

03. The Drake kit comes with simple plug-and-play wiring, no cutting or splicing required.

04. The wiring from the Rally-Pac integrates with the kit’s supplied coil wire (routing through the firewall to the coil), ignition wire (routed to the back side of the ignition switch), and the car’s under-dash harness.

06. First, disconnect the battery and pull the driver’s side door sill plate.

08. Pop out the driver’s side courtesy light doorjamb switch to reveal the factory wires.

09. The factory wiring harness is color-coded, but over the years the colors can become camouflaged. Part of our wires had been over-sprayed with Poppy Red paint. Be careful to track the original color of each wire.

10. Plug blue-to-blue and green-to-green, essentially placing the new Rally-Pac wiring between the door jamb switch and the factory harness. The blue wire supplies continuous power to the clock. The green wire connects to driver’s side door light switch.

11. The area under the kick panels contains numerous holes to secure the black ground wire.

12. Reach under the dash and pull down the factory wiring, as seen here.

13. Plug the wiring harness from the Rally Pac into the coil wire, ignition wire, and the factory under-dash harness. Push and hide the wires up and under the dash.

14. Route the ignition wire to the backside of the ignition switch. This job is the hardest part of the installation, requiring crawling beneath the dash to reach up and unscrew a nut to attach this lead (seen here it has an extra wiring harness out of another car). Removing the instrument cluster from the dash is often an easier option to connect wiring to the ignition switch. Simply remove the retaining screws, pull the cluster out a few inches and set aside.

15. Feed the coil wire through a factory hole in firewall and connect it to the distributor side of the coil, marked with a negative symbol.

16. White prefers to wrap the coil wire with electrical tape.

17. AFTER
The Rally-Pac integrates in the driver’s line of sight to produce a hot-looking instrument cluster.