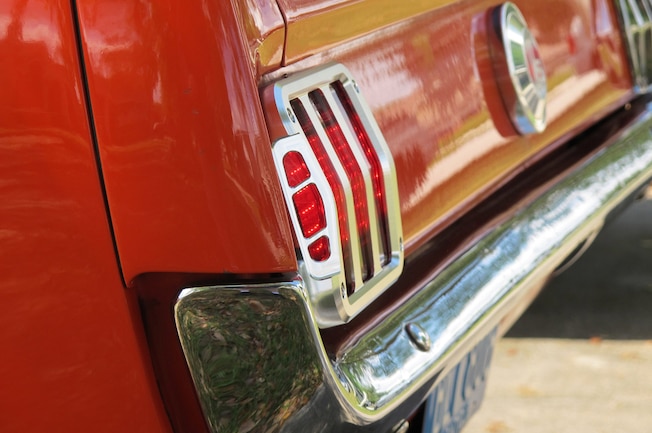 Any time we can improve the safety of our classic Mustangs without performing major modifications we’re all for it. Adding better lighting, better braking, and so forth in a true “bolt-on” product provides all the benefits of these enhanced safety features without hacking up your pride and joy. Of course if it adds a little bit of styling that doesn’t hurt either.

The 1964½-1966 Mustangs never had any side body lighting or reflectors from the factory. Matter of fact, it wasn’t until 1968 that it was federally mandated for all vehicles to be manufactured with them. Sure, we’ve seen people add side marker lights into the front fenders and rear quarter panels, but those are major modifications that require paint and body work and do not look original (if that’s a concern).

Scott Drake recently developed a new billet taillight bezel called the Sidewinder—so named due to its outside edge being machined/scalloped to allow the taillight lens to shine through. This gives off a red illumination at the rear side of the Mustang without any body modifications. Billet may not be your thing, but these taillight bezels literally bolt on with four screws and zero modifications. You can polish them (after stripping the clear anodizing), powder coat them, or even just paint the middle bars black for an OE look. Whatever you do, installing these Sidewinder bezels is a ten minute job that will no doubt increase your Mustang’s side visibility and offer a nice measure of increased safety/awareness when you’re driving your classic Mustang after nightfall.

1. This 1965 hardtop has been using the stock taillight bezels with a pair of LED taillights for increased illumination, but we’re going to go one step further with adding the new Scott Drake Sidewinder bezels.

2. The stock taillight bezel offers a way to secure the lens to the taillight panel and gives the rear of the car some chrome flair, but otherwise doesn’t do anything to help offer better visibility of the taillights or brake lights.

3. Four Phillips head screws retain each stock taillight bezel. Remove these four screws and the bezel will be free.

4. With the bezel removed the taillight lens and gasket can be inspected, as well as the reflector housing and bulb (in our case this Mustang had an LED replacement lens assembly), and any parts can be serviced or replaced as necessary.

5. Since our lenses were a few years old, but otherwise in decent shape with no cracks or chips out of them we opted to simply give them a simple cleaning followed up with a light application of compound that we buffed out to a nice smooth finish, bringing the red lenses back up to like new in minutes.

6. The new Scott Drake Sidewinder taillight bezels install with new stainless T-20 Torx head screws, included. These screws are longer than the stock Phillips head screws that retained the stock bezels due to the increased thickness of the Scott Drake pieces around the perimeter.

7. Once installed the bezels sit cleanly against the taillight panel and secure the taillight lenses perfectly with no looseness or rattles.

8. With the parking light circuit illuminated it is easy to see the Sidewinder’s side reliefs offering illumination to the outside edge. Of course the brightness will be more pronounced at night and when the brakes or turn signals are applied.

9. Straight on, there’s no difference in visibility of the taillight illumination. While visibly the center dividers look wider on the Scott Drake pieces, it is the black paint in the stock bezels that deceive the eye into them looking narrower.

10. All finished! The completed project took us only about 15 minutes, including the time it took to bust out the compound and clean up our lenses. If you need to replace your lenses, bulbs, gaskets, or refinish/paint the reflector housings your project may take a little longer, but whatever you need to get your taillights into shape for safe driving Scott Drake has the parts you need.