Instrumental Swap: Know what’s going on in your engine by using the VHX direct-fit instrument cluster assembly for the ’65 Mustang 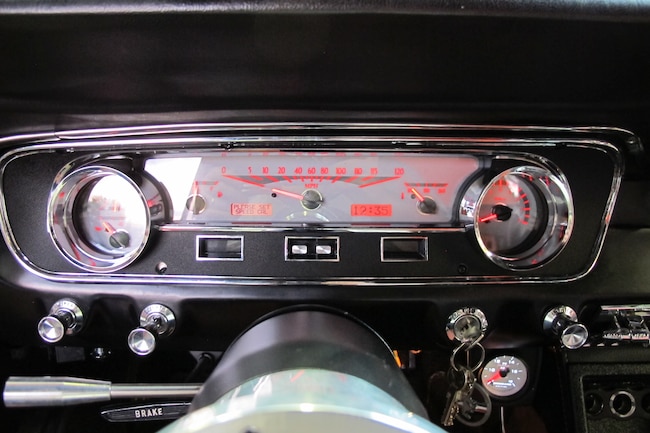 Sadly, none of us are getting any younger, and that goes for your beloved vintage Mustangs, too. There’s a reason the restomod movement has been so popular during last two decades. Restomodding a vintage Mustang so it has better handling and braking, as well as comfort and safety upgrades, allows you to enjoy our Mustangs even more. If you enjoy driving your Mustang more because it’s safer and more comfortable, you’ll want to take it out more and hit the cruise nights and car shows. That is what we all want, isn’t it, to enjoy our vintage Mustangs?

One of the problematic areas of first-generation Mustangs, we as owners, have been trying to improve upon are the woefully dim side-illuminated instruments in the Mustang’s dash. Besides being dimly lit and hard to read, many of these gauge’s measurements are merely suggestions due to their varying rates of accuracy (leaning towards the highly inaccurate end of that scale). And some simply no longer work at all (cough, ammeter, cough) or weren’t part of the original factory gauge package (cough, tachometer, cough). Over the years, owners have tried LED light bulbs, add-on gauges like the steering-column mounted tach, or the auto part’s store three-gauge-panel setup under the dash (where they’re so easy to read while driving, right?). However, these are just Band-Aids on what essentially needs to be an easy-to-install complete gauge replacement that incorporates modern gauge technology with easy-to-see backlit gauge faces.

Several years ago, the folks at Dakota Digital, the company famous for its vacuum fluorescent digital gauge packages, including direct replacement Mustang systems, developed their VHX line of replacement instruments. The VHX system was designed from the start to be a direct-replacement gauge panel that boasts all the essential gauges for monitoring your Mustang. This includes through-the-dial back lighting, settable warning systems, electronic speedometer with trip odometer, built-in tachometer, and a slew of warning indicators for those with EFI systems, cruise control, and other such add-ons.

The VHX system launched with a ’65 to ’66 five-dial gauge cluster setup, and later, the ’67 to ’68, ’69 to ’70, and ’71 to ’73 dash layouts were added to the option list. Dakota Digital even has VHX packages for Fox Mustangs. However, those ’65 Mustang owners with the base, long-sweep speedometer gauge panel based off the ’64 to ’65 Falcon were out of luck if they wanted to keep that early look in their dashes. Not anymore! Recently released in the VHX line is Dakota Digital’s new Falcon, Ranchero, and ’65 Mustang system. The installation differs little from the ’65 to ’66 five-dial setup, but we felt it warranted its own how-to installation article. Check out the steps here, and then take a look at Dakota Digital’s different face and illumination options on its website.

02. This is the current setup in this ’65 hardtop. Stock gauges with an iffy temperature gauge, oil pressure and alternator idiot lights, and an owner installed mini-tach on the steering column. Time to kiss all this goodbye!

03. Disconnect the battery before proceeding. You can remove the factory gauge cluster by removing the Phillips head screws surrounding the perimeter of the gauge bezel. Removing the steering wheel is optional, but we’ve always found it helpful when working on the dash or gauges.

04. With a shop towel or other form of protection on the steering column tube, lift the gauge cluster up and tilt it forward to access the speedometer cable, wiring, and bulbs on the rear of the assembly. Disconnect all wiring from the gauge assembly and remove the assembly.

06. The new Dakota Digital VHX system for the ’65 Mustang (and early Falcon and Ranchero) comes out of the box as a complete assembly. All you must do is remove the protective plastic from the gauge lenses. We’re using a new bezel from Scott Drake here, and you can even order new bezel mounting screws, if you like, so you don’t have to take your stock gauge assembly apart.

07. Carefully line up the Dakota Digital VHX assembly with the bezel (the original or replacement) and secure using the original screws that we removed earlier. Or install using new screws, if you prefer.

08. Dakota Digital provides these two angle brackets and mounting screws to replicate the metal ears on the stock gauge assembly to secure the unit on the dash. The brackets are bare metal here, which is an early production unit we’re using for installation photos. But in production kits these brackets will be powdercoated black to match the black camera case gauge bezel.

10. The included sensor is installed using a provided adapter. The VHX kit includes several pipe-thread and flat-sealing washer fittings to allow easy installation of the sensors in just about any engine combination.

11. The water-temperature sensor uses the early-style small threads, so in our case, it threaded directly into the cylinder head’s water jacket.

12-13. The VHX kit includes an electronic speed sensor and drive adapter to replace the gear-driven cable of your stock speedometer. Installation is simple. First, remove your old speedometer cable from your transmission. Shown here is just the transmission end of the cable, as our aftermarket cable pulled out of the fitting during removal. Using a small pick tool or screwdriver, release the retaining clip on the speedometer driven gear and remove the gear. Transfer the gear to the drive adapter and secure with the factory clip. Lastly, thread the speed sensor onto the drive adapter, and the completed assembly is ready for installation.

14. The assembled speed sensor simply goes right back into the transmission, as you would if installing a cable-type speedometer drive. Secure the unit to the transmission with the original retaining bolt and connect the wiring harness to the speed sensor. We routed the harness up to the firewall along the parking-brake cable route.

15. The oil pressure and temperature senders are wired via the included harnesses. Simply plug them into the sensors (two wire is water, three wire is oil) and route them through the firewall to the gauge area in the dash. Because there was no longer a speedometer cable in the firewall, we installed a grommet in the factory hole and passed the wiring for the speed, oil, and water sensors through it for a clean, no-drill installation.

16. The VHX control box is fairly compact and can be situated directly behind the gauge opening. We secured it to two dash braces via tie-wraps once wired. The wiring is straightforward. Simply strip back a small amount of insulation, place the wire end into the labeled opening on the box, and secure the wire by tightening the screw. You’ll find all the wiring you need, such as the turn signal and high beam, at the old gauge wiring. If you don’t want to cut your factory wiring, you’ll need to make up an adapter with a length of wire for each connection.

17. The opposite side of the control box is where the majority of the new wiring, which is routed from the engine bay, for the speed sensor, oil pressure, and water temperature attaches. For the fuel gauge, retain the OE fuel-level sender. For ’65 to ’70 Mustangs, attach the fuel-sender ground to a solid ground like a dash brace. For the ’71 to ’73 fuel senders, it is best to use the actual ground wire from the sending unit. The box also requires a constant power source and switched power leads. Lastly, instead of using the included momentary buttons for the “SW1” and “SW2” terminals, connect the included wiring pigtail, as this model uses built-in momentary buttons in the VHX gauge assembly itself.

18. Cover any unused original wiring from your stock gauge panel in shrink wrap and seal the end using a pair of pliers, as shown here. This will prevent shorts and possible electrical damage to other components.

19. Once the wiring connections are completed, reconnect the battery. Verify the status LED on the corner of the control box blinks every couple of seconds. This indicates that the box is receiving constant power. When you turn the ignition switch to “ON” the LED should blink faster, verifying the box is seeing switched power now.

22. Before mounting the VHX gauge assembly into the Mustang’s dash, turn the ignition key to the On position and verify the gauges move, illumination works, and other features work. If something is amiss, double check all wiring at the control box, especially your constant and switched power leads and the ground to the control box.

23. Once mounted in the dash using the stock gauge mounting screws, the two built-in momentary buttons (where the stock odometer used to reside) can be used to calibrate the speedometer, setup the tachometer, program the clock, adjust the illumination brightness, and much, much more. The VHX system has plenty of features, so take your time getting to know how they all work and set your VHX system up to your liking.

24. We finished up rather late in the evening, as evidenced by the clock setting, but it was a good opportunity to show the through-the-dial illumination that makes the VHX system so easy to read. Not to mention, the Mustang now has full instrumentation without having a bunch of add-on gauges, and the look is extremely clean, almost stock looking dare we say!