Fit for a King: Our New Edge Mustang’s interior gets fresh threads from TMI Products 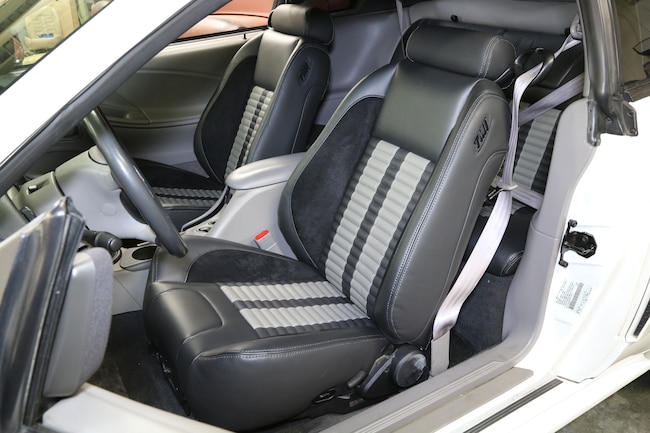 Nothing adds a spring to your step like replacing your worn-out shoes with a squeaky-new pair of sneakers. The same goes for our aging New Edge Mustang project car. As clean as our ride is, the tired interior was showing its age after decades of hard use.

To freshen up the inside of our white stallion, we headed over to TMI Products, where they handled a complete interior makeover, including freshening up our headliner and sun visors. The seat cover set included TMI’s 1999-2004 Mustang Sport R500 low-back seat upholstery kit, which featured new front bucket foams, suede inserts and accents, contrasting stripes and stitching, and headrest covers. Interior specialists Emmanuel and Joel Gamino helped us with the seat cover and headliner installation.

The result was a contemporary look that was not only easy on the eyes but also easy on our backsides. With a few hours of time and basic tools, your Pony’s interior can have the same like-new look and feel. If you want to upgrade your interior but don’t have a New Edge, then here’s more good new: the Sport R500 line is also available for vintage Mustangs all the way up to current-year models.

01. After TMI Products’ Emmanuel Gamino removed the seats from our Mustang, he released the old seat cushion cover by pulling back the cover and cutting the old hog rings from the seat frame.

02. With the seat foam exposed, it was ready for the new TMI cover.

03. Gamino transferred the wire support rods from the old seat cover to the TMI piece.

04. To save time, Gamino used a power hog ring tool to attach the new TMI cover to the rear seat cushion frame. From time to time, Gamino also used conventional hog ring pliers to show us that any DIY’er could get similar results at home.

05. Gamino then secured the seat cover edges to the frame with more hog rings.

08. The seat cover support rods were also to be reused, so Gamino pulled them from the old rear seatback cover.

09. Gamino then peeled back the old seat cover from the rear seatback cushion.

10. The rear seatback frame and foam was ready for the new TMI cover.

11. Gamino folded up the TMI cover and started rolling it over the seatback frame.

13. Gamino reinstalled the trim pieces over the new TMI cover.

14. To allow the seat fasteners to penetrate the new cover, Gamino cut a small hole into the cover.

15. Gamino then reinstalled the folding rear seatbacks onto the hinge frame.

17. With the rear seats done, Gamino turned his attention to the front seats. He began by separating the front seat from its track.

18. Gamino then separated the seatbacks from the bottom cushion.

19. With the seat frames separated, Gamino pulled the old seat cover from the frame.

20. The bare seat bottom frame was ready for fresh foam.

21. Gamino positioned the frame inside the new seat bottom foam.

22. Again, the wire support rods from the old seat covers were transferred to the new TMI covers.

23. Gamino secured the new seat covers to the frame with a power hog ring tool.

24. With the new cover pulled over the foam and secured to the frame, Gamino reinstalled the seat track.

26. With the front seat bottoms complete, Gamino prepared to remove the old seat covers from the front seatbacks by removing the seatback release lever.

27. He separated the seatback cover from the foam.

28. Next, Gamino removed the seat belt guide and peeled the old seat cover off of the seatback frame and foam.

29. With the old cover removed, Gamino separated the old seatback foam from the frame.

30. He then cut a slit in the seatback foam for the headrest.

31. The seat cushion support rods were transferred from the old seat covers to the TMI covers.

32. After installing the new seatback cover, Gamino reattached the seatback to the seat bottom.

33. Gamino transferred the headrest mount over to the new TMI headrest.

34. Before installing the headrest, Gamino installed the seatbelt guide.

35. Gamino finished up the front seat cover installation by inserting the headrest.

36. Before moving onto the headliner, we took a moment to admire and compare our newly covered setup. It is amazing to see how a little sweat equity with new covers and foam can dramatically improve the look and feel of the factory seats.

37. Joel Gamino began tackling the headliner by removing it from the car.

38. Rather than reusing the original headliner backing board, we installed a new TMI piece that feature a much nicer ABS plastic construction. Gamino started by spraying glue, which was followed by installing the black cloth.

39. To fasten the headliner to the Mustang’s roof, Gamino used hook-and-loop fastening strips.

40. The men then carefully installed the headliner back into the Mustang.

41. With the headliner installed, we needed to recover the sun visors to match.

42. Gamino disassembled the old sun visors and installed material that matched the headliner.

43. Using the original fasteners, Gamino reinstalled our freshly covered sun visors. You’ll notice these don’t have mirrors, but we can easily live without them.

44. With the hard work done, Gamino then reinstalled the rear seats.

46. To button up the interior, the Gaminos finished by installing the front seats.

47. We were very pleased with the results. Not only did the seats look right at home in our Mustang’s interior but our backsides felt right at home as well. We also learned that TMI Products offers a wide variety of color choices. Since our interior was two-toned with mostly gray, the black seat with gray inserts matched incredibly well. Suffice it to say, the quality and installation of the TMI Products seat covers are first-rate and an upgrade that we’re proud to show off.