Replace Your Evaporator, Lines, And Seals Yourself, And Save Big Bucks Our supercharged ’89 5.0 can now cruise in air-conditioned comfort, thanks to new parts and O-ring seals from our local Ford dealer. There are two lines that connect to the condenser with Ford spring-lock couplers. Usually, we would tell you to disconnect these lines to replace the O-ring seals, but we need to replace the complete condenser in this situation. Make sure your system has no refrigerant in it. Ours had completely leaked out, but have yours checked before you start. 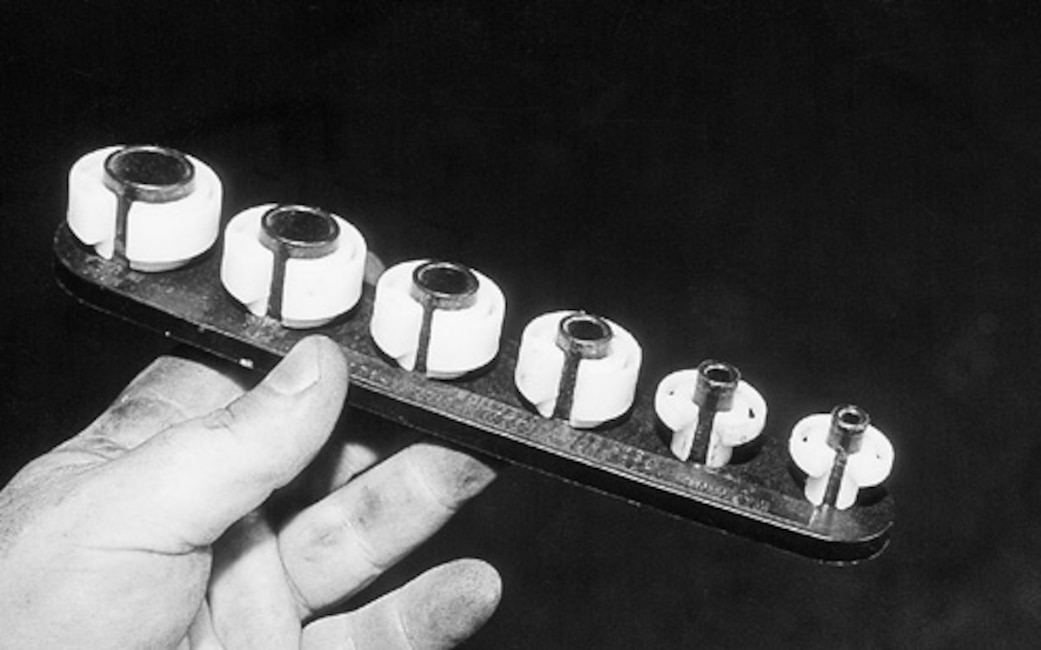 The spring-lock coupler tool shown in the previous photo is a Ford tool, but you can accomplish the same job with the tool shown here, which is more readily available at auto parts stores nationwide. Simply insert the tool until the garter spring has expanded, then separate the lines. 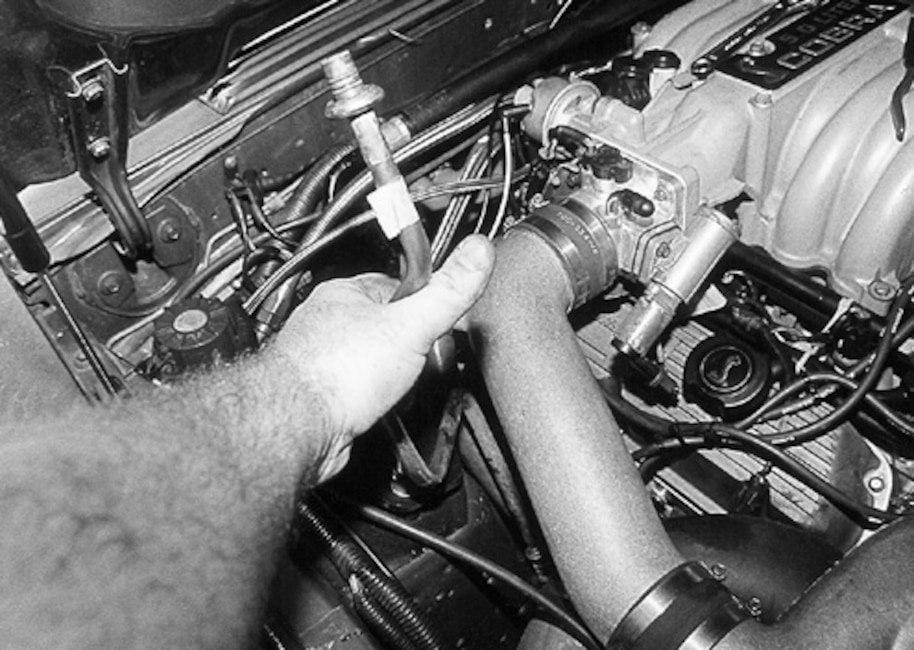 The first line to be removed is the “liquid” line, which also contains the fixed orifice tube inside it. Throughout the years, the fixed orifice can become clogged and hamper A/C performance. We always replace this line when doing any major A/C repairs. The second line— from the condenser to the A/C compressor—usually only requires new O-ring seals, but we decided to replace this line as well. 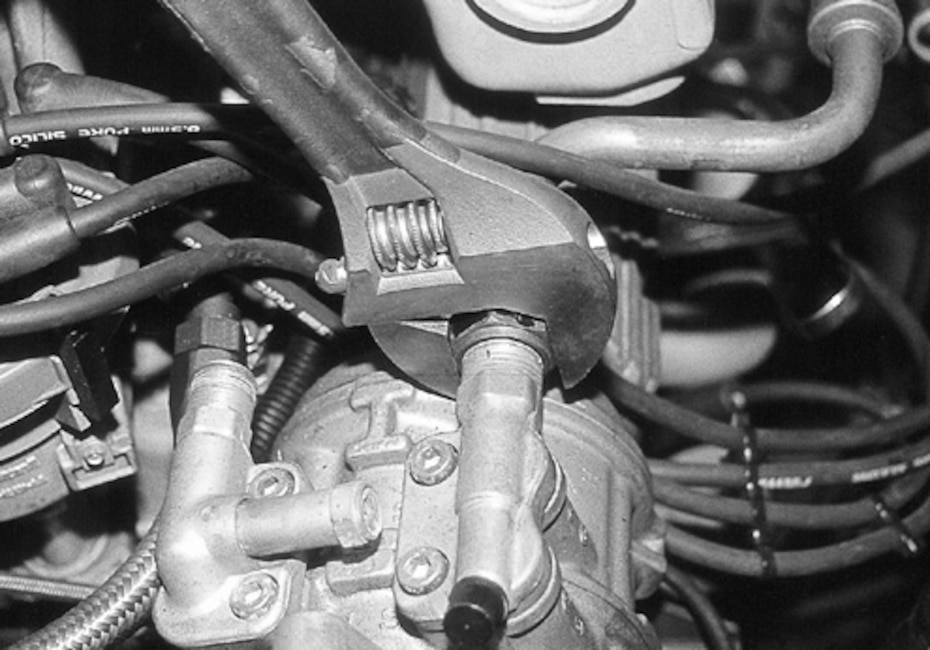 The dryer assembly is the third and final underhood line to be removed. Begin by removing the line from the compressor manifold. 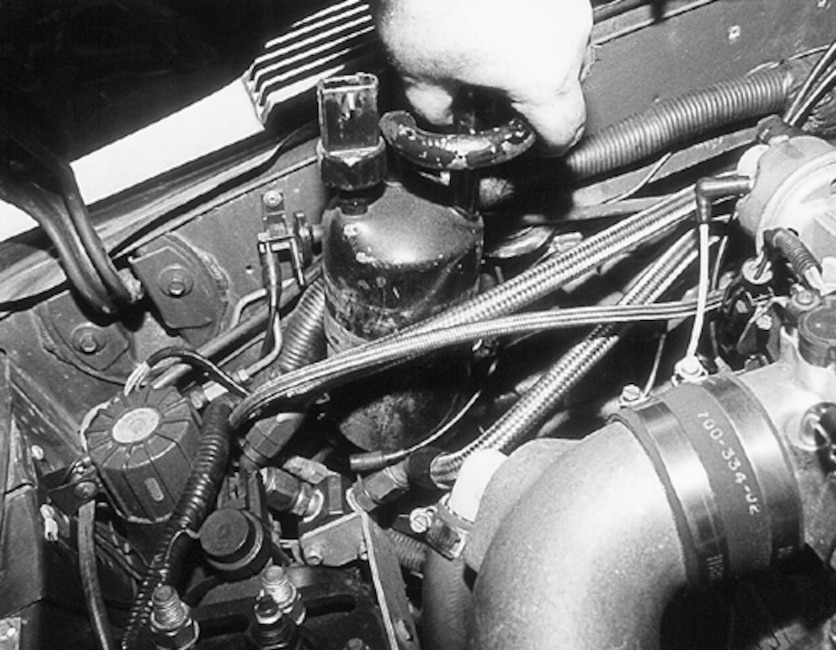 To completely remove the dryer assembly, the dryer retaining clamp must be loosened, and the dryer must be separated from the evaporator line coming out of the firewall. Don’t forget to disconnect the A/C pressure switch wiring before slipping the dryer out of its bracket. 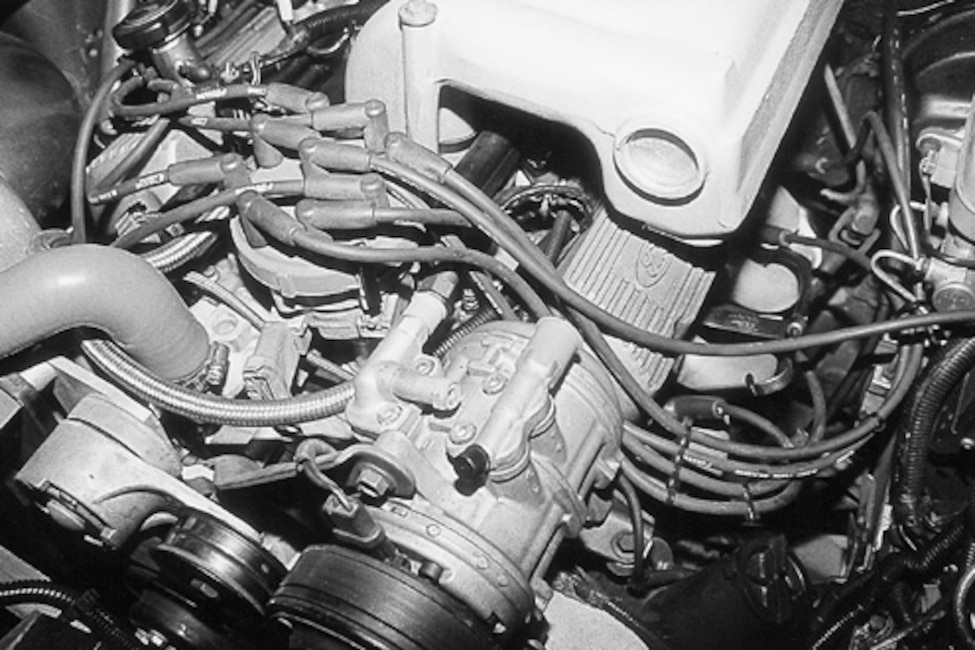 We decided to break up the A/C repair into smaller projects that could be performed over the course of a few days and keep the Mustang driveable. After removing the three lines, we capped off the compressor fittings with plastic plugs. You can also use tape for your repair. 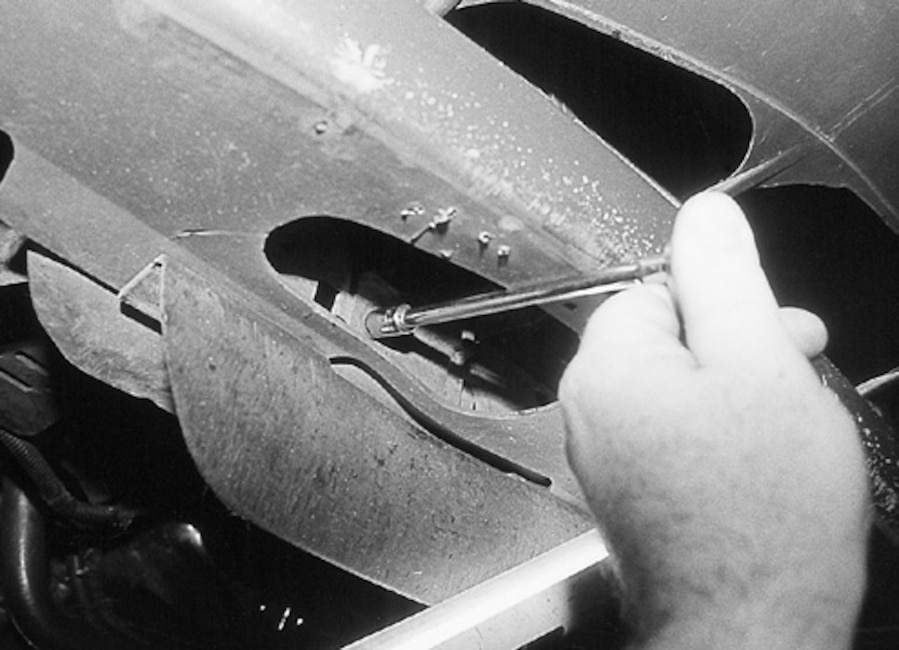 The next day, we had an hour or two to spare (not that it took that long), so we decided to pull the damaged condenser from the car. Two brackets at the bottom of the core support retain the condenser. Remove the bolt from each bracket, then—using a twisting motion—rotate the brackets, and remove them from the core support. 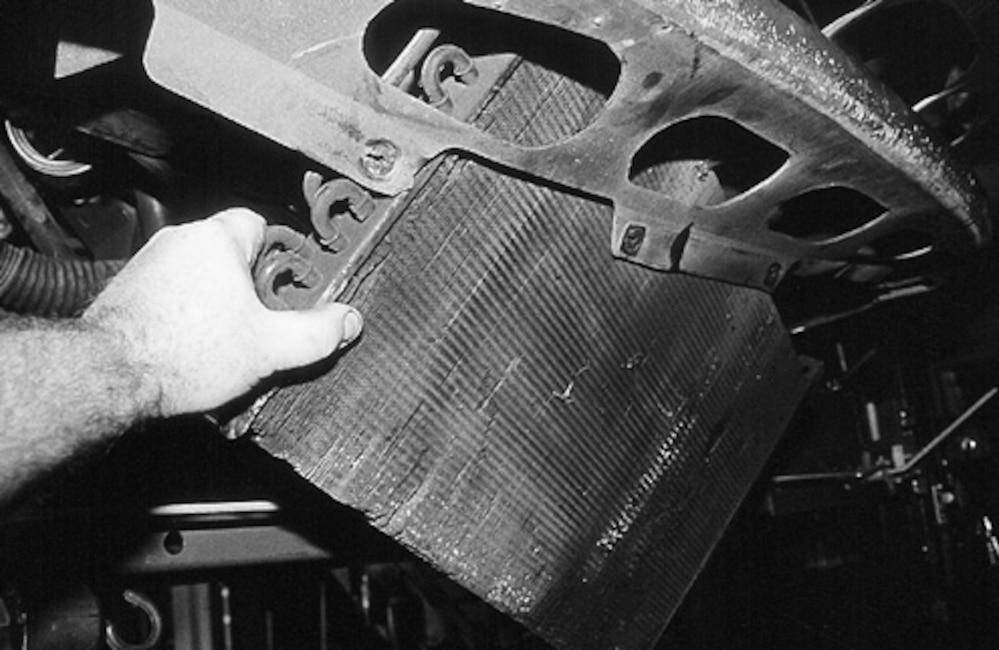 Remove the tapping screws that secure the bottom of the front fascia and the air deflector, to allow enough room to carefully pull out the condenser. A third hand pulling on the fascia might be of use to you. 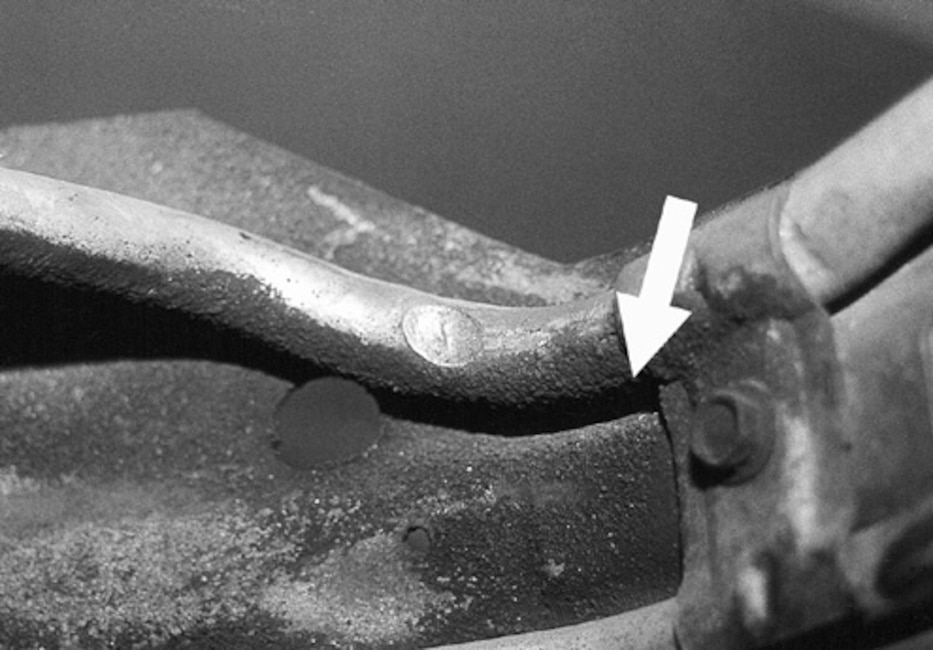 We immediately discovered how the condenser had cracked (arrow). The aftermarket large-core radiator had almost completely worn through the condenser line. Our simple “tweaking” caused it to split at its thinnest point. We’ll adjust the radiator-to-condenser clearance when we install our new condenser. We couldn’t get back to the Mustang for the next step (the evaporator replacement) for a couple of days, but when we did, we planned an entire day for the excursion. The two dryer mounting-bracket nuts are removed from the firewall to access the HVAC case–mounting nuts. 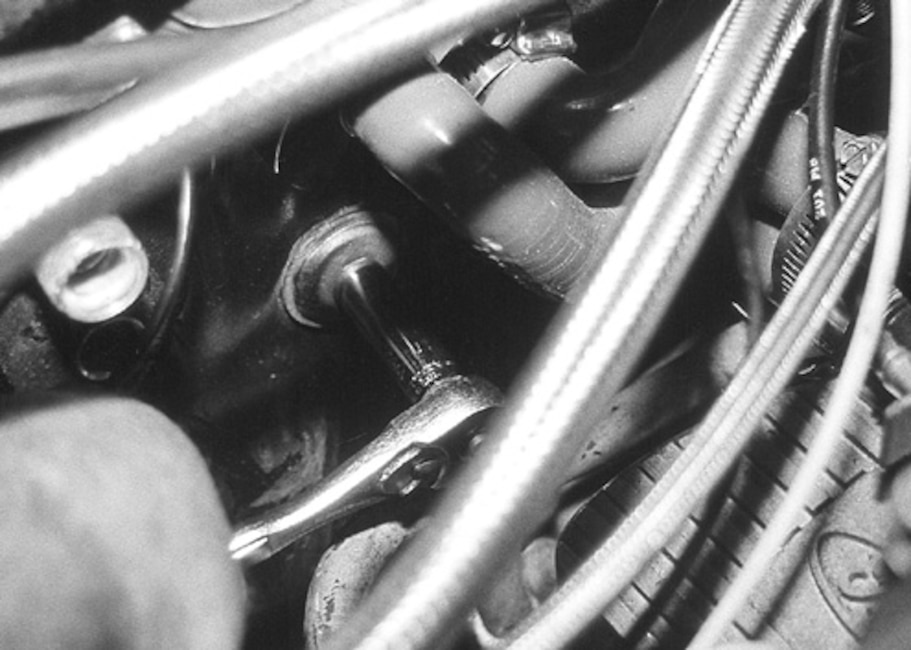 With the dryer bracket out of the way, a 1/4-inch-drive deep socket will make quick work of the two HVAC case mounting nuts. Partially drain the cooling system, and remove the two heater core hoses from the heater core at this time as well. 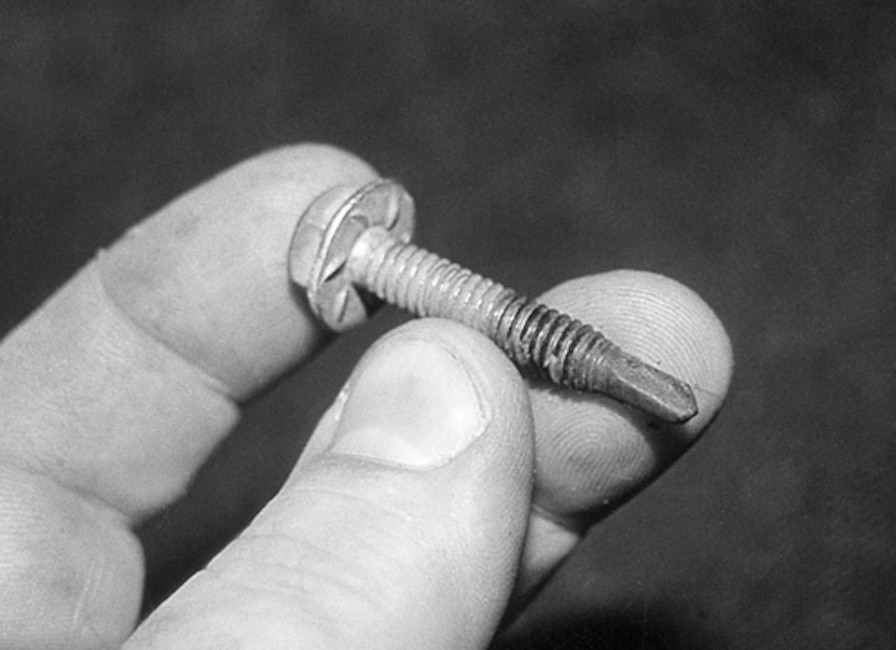 There is a self-tapping bolt that retains the bottom of the HVAC case to the firewall from the inside of the passenger compartment. It is found where the case meets the edge of the carpet. It is best to remove it now before tearing apart the dash. Begin the dash dissection by “dropping” the steering column. After removing all trim panels in the area, the four retaining nuts can be removed and the column lowered until it rests on the driver seat. Make sure you unplug the ignition switch and other column wiring to avoid stretching or breaking any wires. You will find a locknut retaining the dash assembly to a brace directly above the steering column. This will need to be loosened to allow the dash to move away from the firewall later. 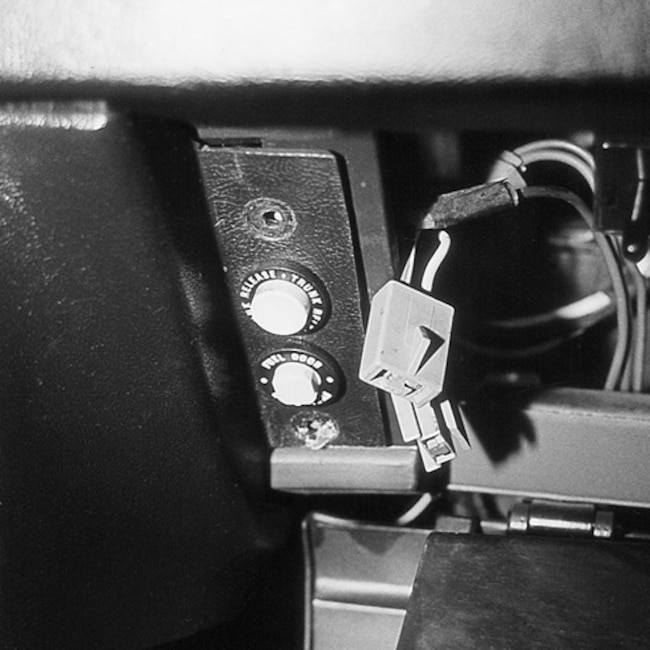 The complete console will need to be removed next. Lower the glovebox door by squeezing the two sides in, then disconnect any fuel or trunk release switches and remove the two Phillips screws at the top of the console. Repeat for the two screws on the driver side, then pry off the A/C control surround trim. 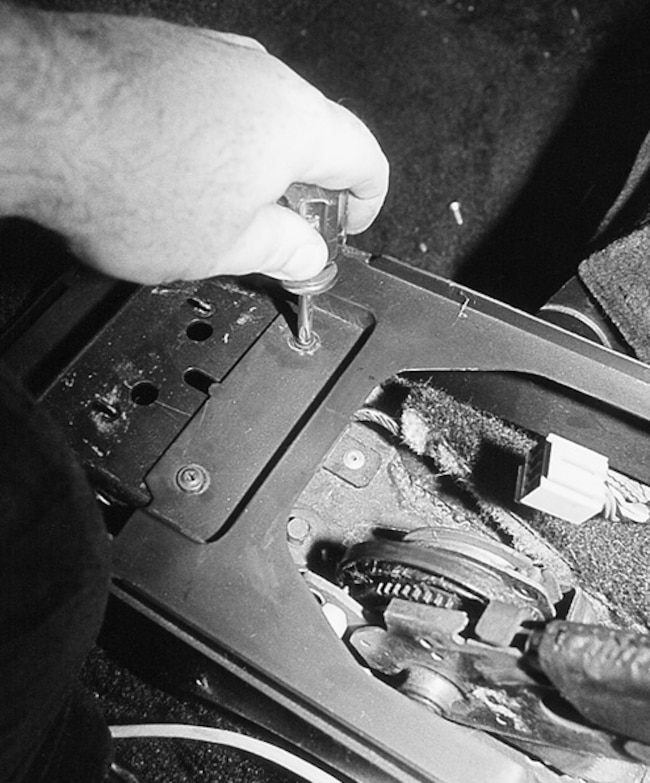 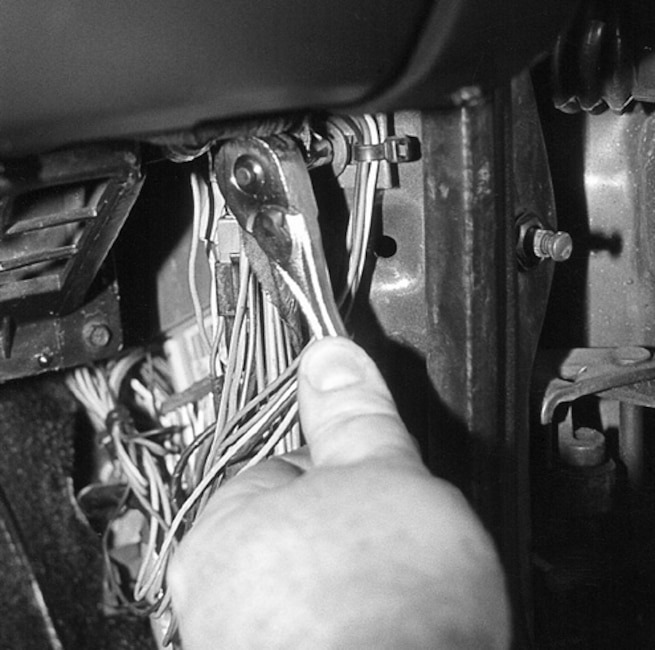 Remove the left and right kick panels, then remove the lower-dash retaining bolt found on each side. Size varies—depending upon years—but most late-models use an 8mm bolt. 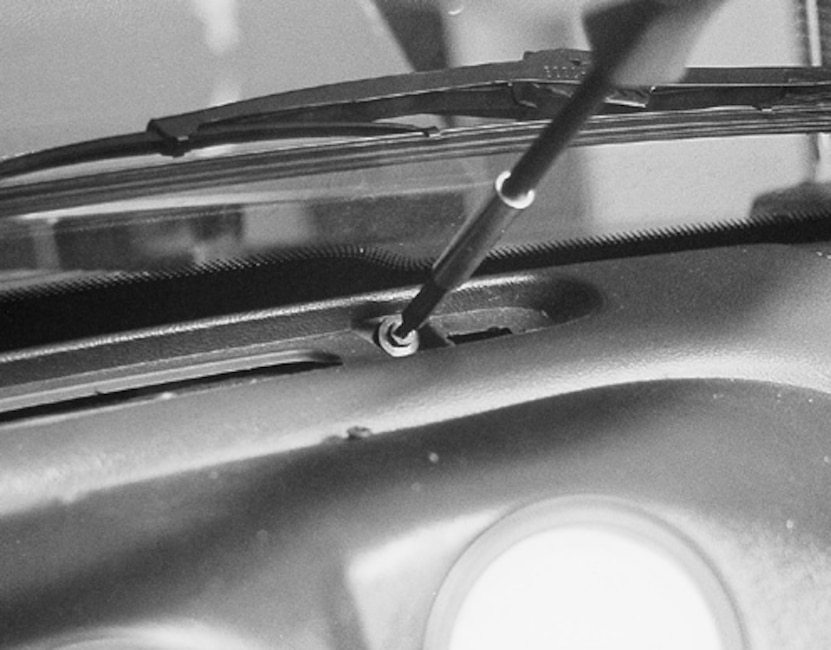 Pry out the defroster-vent trim at the top of the dash, then remove the two dash speaker grilles (’87-’93 models) or remove the dashpad (’79-’86). Next, remove the five mounting screws at the top of the dash (T20 Torx on the later models). At this point, the dash will just about fall off the firewall. Pull the dash up and out and rest it on the passenger seat, disconnecting the speedometer cable as you go—to prevent damaging the cable. 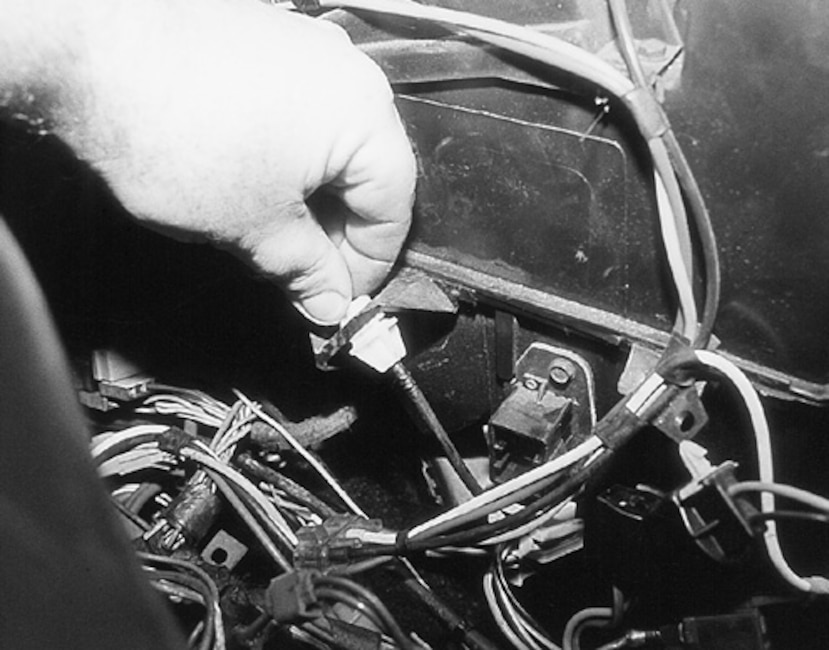 With the dash out of the way, you can clearly see the A/C temperature blend-door cable. Disconnect the metal tag holding the cable to the door shaft, then press the plastic retainer to disengage it from the HVAC case. Unplug the blower motor, the vacuum-line master plug, and the resistor block wiring at this time as well. 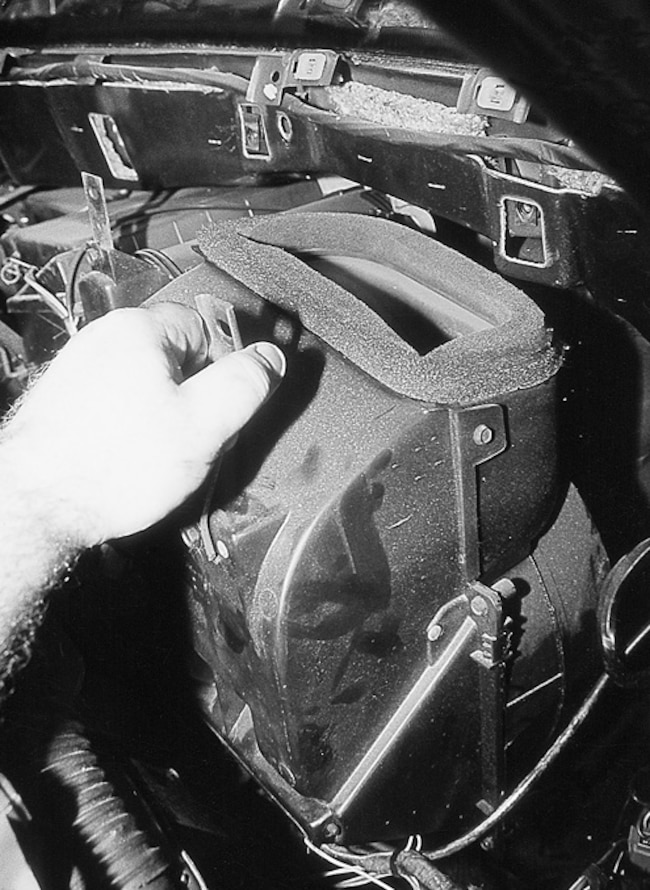 Remove the two bolts retaining the HVAC case to the top of the firewall, then wiggle the case away from the firewall and out the passenger side of the car. A helper would come in handy at this point, to keep the dash away from the case during removal. 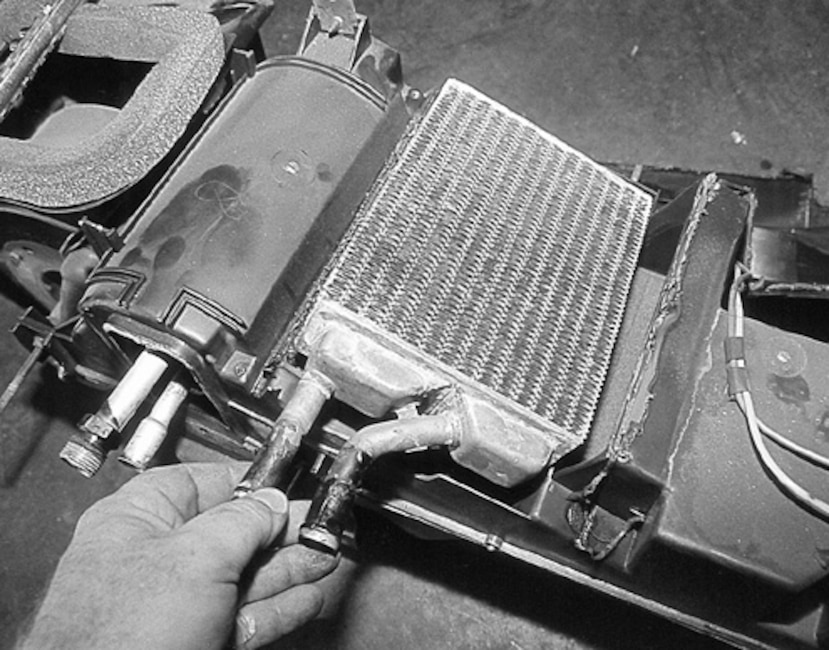 Even though the owner had no complaints about a leaking heater core, we opted to spend the additional $20 on a new heater core and replace it while the HVAC case was out of the car. We know “Murphy,” and we’re no fools. 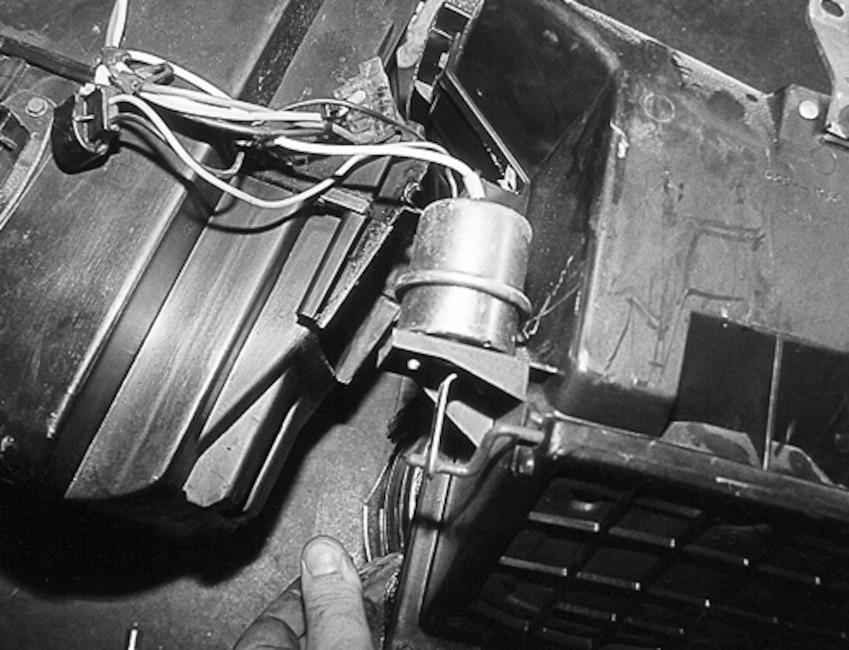 Accessing the evaporator core requires separating the blower motor case from the HVAC case, which can be performed in the car if you ever need to replace only the blower motor. You will find two small screws at the bottom of the case, which allow the separation to occur. Unplug the vacuum door hose and pull the two cases apart. Removing the evaporator will require cutting open the top of the case, along the guide lines in the case. You can use a rotary cutoff wheel, a hot knife, or even a utility knife (with some patience) to open the access panel. Have someone hold the panel open so that you can easily pull out the old evaporator. 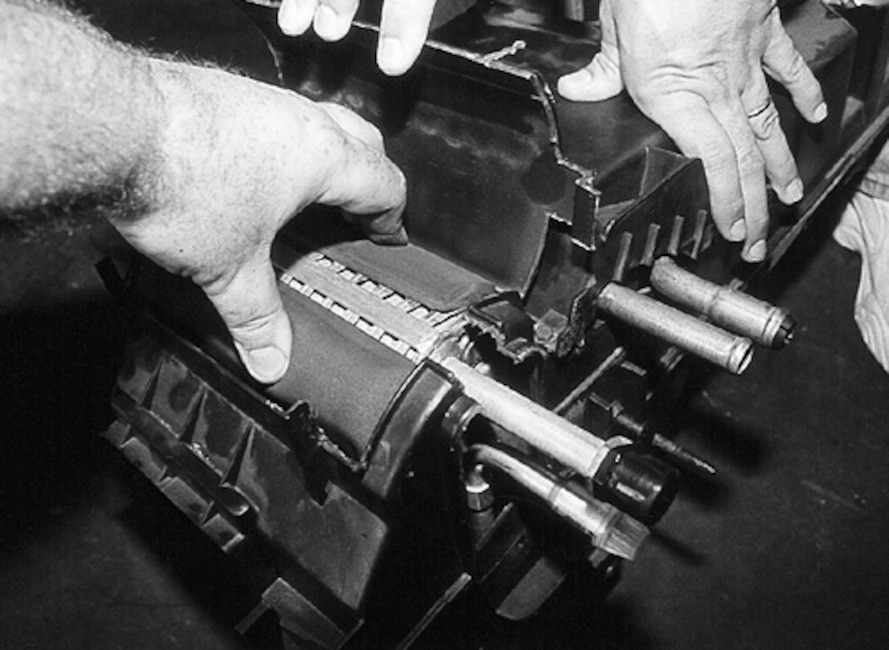 We’ve used aftermarket evaporators that didn’t have the case seals—requiring transfer from the old evaporator—but the Ford evaporator comes with new case seals already glued in place. Simply drop the evaporator in place of the old one. 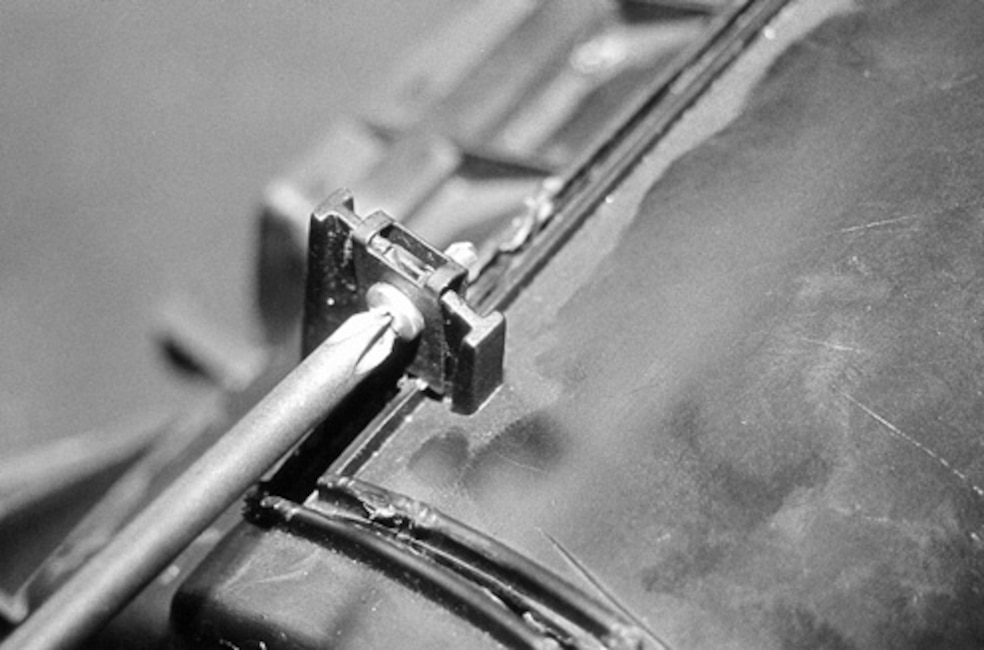 According to the Ford shop manual, you are supposed to install nut clips over the two tabs (one shown here) on the top of the HVAC case, then install tapping screws to secure the door closed. This is but one option to secure the door. In the past, we have melted the plastic back together with a soldering iron. We used 3M strip caulk to seal the remainder of the cuts made, though silicone or other sealant can be used as well. 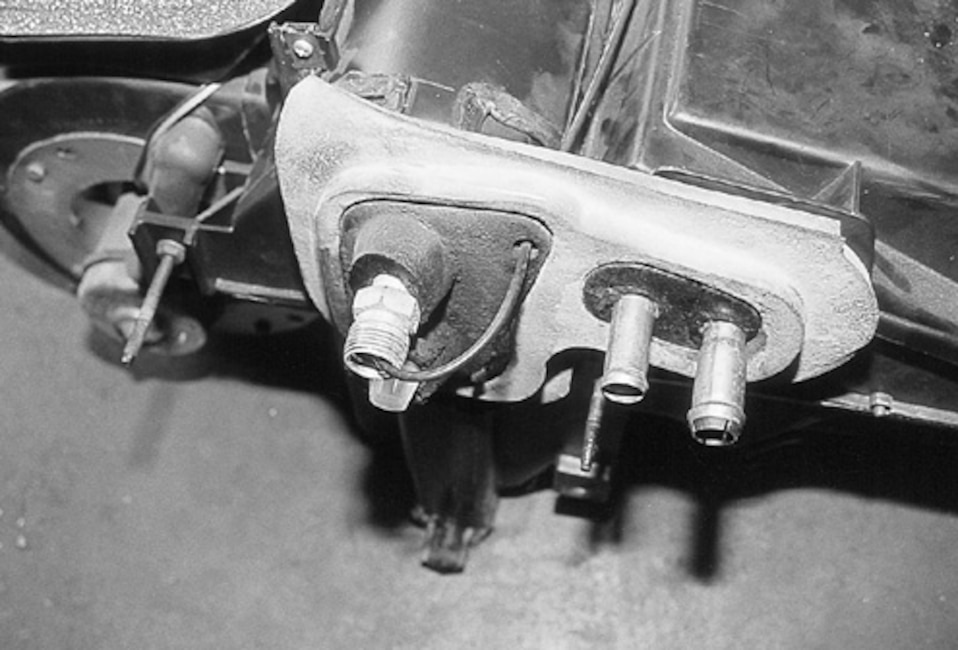 Reassemble the HVAC case by installing the blower motor housing and the firewall gasket over the heater core and evaporator fittings. To prevent damage to the vacuum source line that also goes through the firewall, temporarily insert it into the evaporator fitting as shown. Reinstall the HVAC case, and reassemble the complete interior by reversing the procedures explained previously. 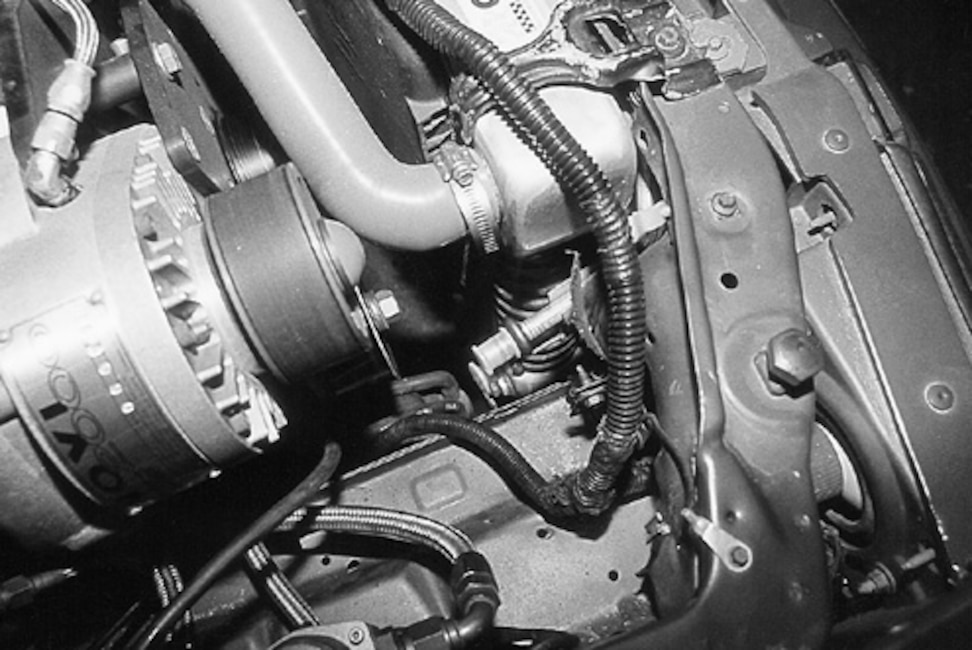 The next day, we decided to tackle the remainder of the job: the condenser installation and the new underhood lines. The new condenser is installed in the same manner as our removal procedures. Notice we bent the fittings to clear the blower bracket and pulley. This was carefully performed off the car. 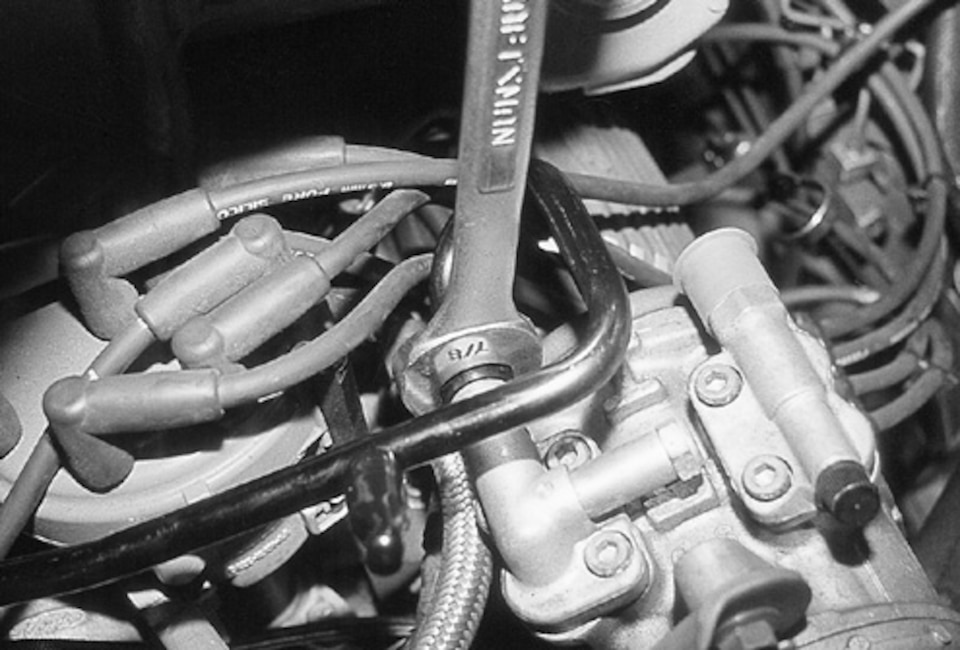 If you install all new lines, they will come with new O-ring seals on them; otherwise, you will have to purchase new O-rings for your original lines. Apply a small amount of assembly oil on the O-rings, then carefully install the fittings. The first line installed was from the compressor to the condenser. 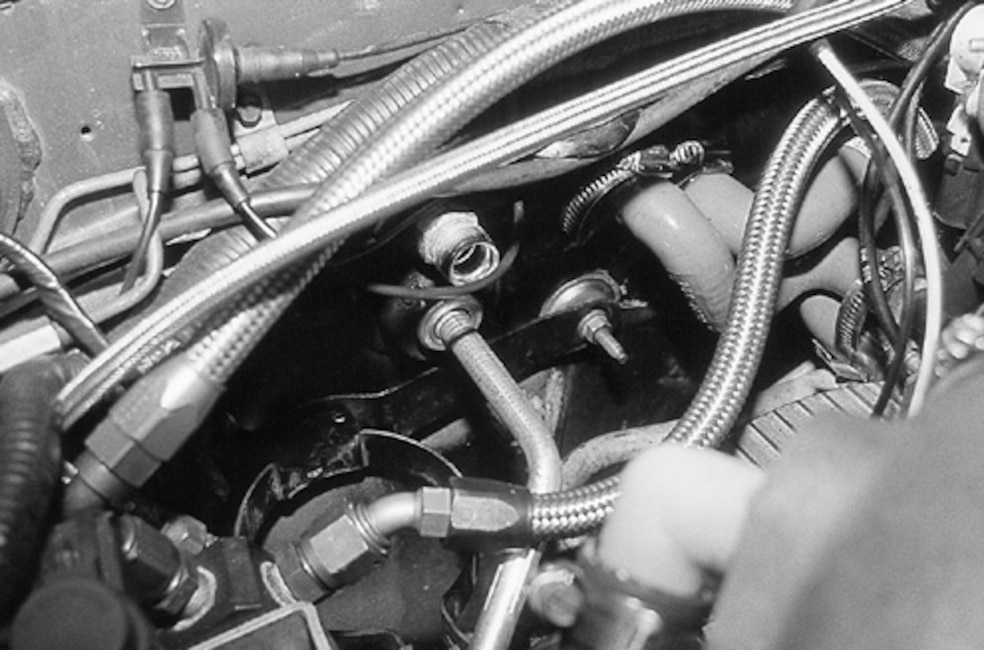 The new “liquid” line was next. This line uses the spring lock fittings at both ends. Make sure the lines are completely seated by listening for the click when pushed together. Make sure this line is clear of the exhaust header or any other items along the framerail. 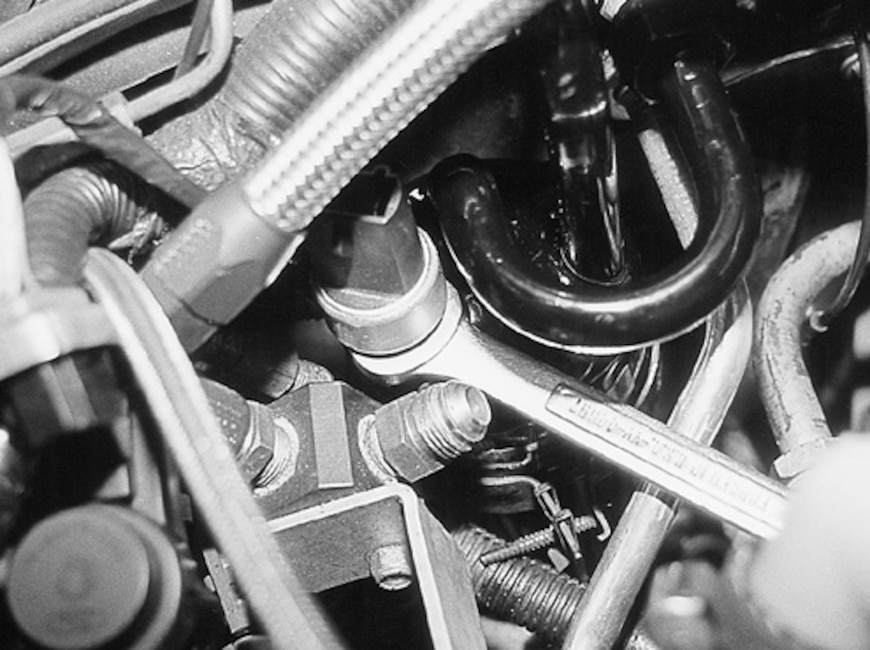 After reinstalling the HVAC case mounting nuts and dryer bracket, the dryer can be installed. Be careful when fitting the dryer to the evaporator, because the fitting can be easily cross-threaded. Route the dryer’s hose around the intake, and connect it to the compressor, using assembly oil on the fittings. Check that the new pressure switch is tight, because ours came installed finger-tight on the dryer. Double-check your work, then have your A/C system leak-tested again and recharged at your local A/C repair facility. Now you’ll be ready for those hot days coming soon.

Back in the Apr. 2000 issue of Mustang Monthly, we discussed details of how to determine what is ailing your late-model air conditioning system. The particular Mustang we diagnosed was an '89 LX 5.0 sedan, but the repair procedures will be nearly identical for any year 5.0 and useful for both V-6 and four-cylinder owners as well.

To refresh your memory, the '89 needed a new evaporator, hoses, and a dryer assembly. In the interim, the Paxton NOVI supercharger it is wearing has been updated with a new race bracket and tensioner, requiring "tweaking" of the A/C condenser lines. During this operation, the condenser developed a crack and had to be added to our list of replacement items. Many of the lines and fittings are easy to access, so we will simply point out a few tips in that area while we concentrate on disassembly of the dash area and removal of the HVAC (Heating, Ventilating, and Air Conditioning) case from within.

Obtaining replacement parts can be either from your Ford dealer or favorite auto parts store. We opted for the Ford original look and quality by purchasing our service parts through our local Ford dealer. The typical evaporator and hose repair at an A/C shop can set you back more than $1,000, but doing the work yourself can easily save you $400-$600, depending upon the parts you need. If we hadn't cracked the condenser, we could have easily saved more than $200 right there with one part.

The only service required after buttoning up the car is having your system recharged, which will run you anywhere from $75-$150, depending upon labor rates and refrigerant costs.