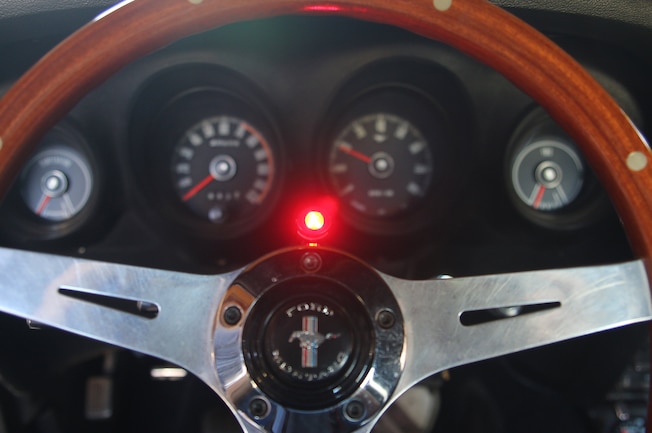 The world has gone wireless, and that is quickly becoming the reality in the automotive world as well. New cars have all sorts of wireless and Bluetooth technology to both operate the car and make the driving experience better and more convenient, but other than some high-end restomod builds, we haven’t seen a lot of that technology carry over into the hot rodding/restomod world. Until now.

We first saw Proform’s Wireless Mini Digital Shift Light and Diagnostic Tachometer (part no. 67006C) at a trade show and it looked like a good idea, but how would it work in the real world? We had them send us one to find out, and I’m here to tell ya, this is one of the neatest, simplest products I’ve used in a long, long time.

It hooks up just like other shift lights, with just three wires: red goes to switched or constant 12 volts; black to ground; and green to the tach signal (negative side of the coil). The difference is that you don’t have to pass any wires through the firewall—they go to a small transmitter about the size of a Zippo lighter that mounts under the hood, and sends a wireless signal to the shift light/tach inside the car. The 4¼-inch long shift light works with 1- to 12-cylinders, is adjustable from 100 to 12,000 rpm, its three amber LED lights are adjustable for brightness, and it also has a quick-disconnect mount that lets you remove it for outside use as a tach. That’s right, it also functions as a tachometer, allowing you to tune the car without having a buddy tell you what the tach is reading—just pop it off the mount and take it underhood with you. Proform offered that in a racing application, the crew chief can hold the unit at the starting line to check what rpm the car leaves at. To test that, we removed the light and walked away while the car was running. We got farther than 40 feet away from the rear bumper and the tach was still reading accurately. Now that’s trick!

The shift light itself uses four LR44 (303) or SR44 (357) watch-style batteries that are included in the package, and Summit Racing sells it for $85.97, which is more than Summit’s budget-based light ($43.57) but half of what the MSD and Auto Meter lights cost, and none of those are wireless.

2. This is the wireless transmitter. It comes with two-sided Velcro to make it easy to mount under the hood. We chose to hide it behind the passenger side shock tower.

3. There are only three wires to hook up: 12-volt, ground, and tach signal. We wired it direct to 12 volts at the starter solenoid, and grounded it with an accessory lead on the battery’s ground cable. As long as it is not receiving a tach signal and transmitting, there shouldn’t be a current draw.

4. Our ’69 Mustang has a Pertronix Ignitor conversion with a factory-style coil, so we hooked the green tach signal wire to the negative side of the coil.

5. Proform says to mount the shift light with screws, adhesive, or hose clamps, but we used two-sided foam tape to mount it on top of the steering column.

6. The light itself sits in a quick-release bracket.

7. There’s a small on/off switch at the rear of the light. Turn it on to program the light, setting the number of cylinders (1-12), rpm shift point (100-12,000), display intensity (0-7), and to turn the RPM display off and on—turning the rpm/tach display off saves battery life, allowing the unit to operate as just a shift light. You can turn it back on at any time. These are all quickly and easily set with the Mode and Set buttons. Once the initial setup is done, the rpm values will be shown on the display when the engine is running. The shift light will remain on when the shift point is exceeded and turn off when the rpm falls below the set point. When not in use, turn the unit off to save batteries.

8. We popped the light off and held it under the hood while the car was idling.