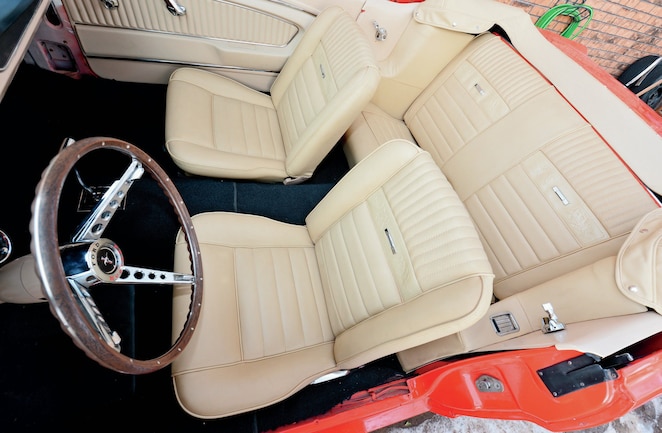 Leather was most certainly not an option for early Mustangs, but Henry Ford II’s personal 1964½ K-code coupe came brand new with leather seats, along with a leather roof in place of vinyl. In 2009, at the All-Ford Nationals in Carlisle, I ran across a 1964½ Mustang convertible with what the owner said were original leather seats. They appeared original and unrestored. This car’s six-digit DSO, prefaced with 84, revealed “special order for Ford Motor Company use.” (Even the paint code was blank and a special order shade of green.) The car also came with leather door panels and a leather-covered console.

At first glance, leather doesn’t jump out because the shape and stitching of the seats is so similar to a vinyl-covered seat. But leather is obviously a more expensive and a more desirable material and upon closer inspection, leather reflects an organic grain and is less shiny than vinyl—not to mention it has the rich smell that we all love. I figured if the Ford Design Studio could equip certain celebrity Mustangs with leather seats (the green car, we are pretty sure, went to Nelson Rockefeller, governor of New York in 1964), then why couldn’t I do the same upgrade for my 1965 convertible?

The first early Mustang modified with leather seats that I ever saw was the 1966 Scott Drake “Pay It Forward” convertible, which I photographed for this magazine in 2009. With Parchment leather deluxe seats this red car was a real head turner. Deluxe, of course, is factory catalog language for the fancier interior with running pony inserts but still in vinyl. To have both pony seats and special-order leather just might be a first. I have never heard of or seen an original Mustang with a deluxe interior that came special ordered from Ford with leather, but Distinctive Industries (DI) in California has an answer to that with their leather deluxe “pony” seats for early Mustangs. DI is not a retailer—they supply the vendors advertising in this magazine with their products.

So when I began restoring the interior on my 1965 convertible, I got an idea. The original paint was Poppy Red—a real Code 3 car; rare and iconic. The original interior was code D6, Ford White in 1965 and Parchment in 1966. My car did not come with deluxe pony seats, but I liked the look of Drake’s Pay It Forward car so much I wondered about the possibility of leather pony seats in place of vinyl-covered buckets.

I called Craig Chesley at the East Texas Mustang Club, which had restored Drake’s Pay It Forward ’66 convertible for charity, and Chesley sent me to Jim Jacobs, the club member who installed the upholstery. When I asked him about the difficulty in working with leather seat covers as opposed to vinyl, Jacobs said, “It was much easier [working with leather]. The leather was awful forgiving.” I also wondered what other parts of the interior were leather and what parts of the interior needed to be painted to match the leather, so I followed along while my ’65 convertible had its seats upgraded to genuine leather.

01. The car that jump-started my craze for leather pony seats was Scott Drake’s Pay It Forward ’66 convertible, restored in a little over 100 days by this red-shirted group of men from the East Texas Mustang Club.

03. The front and rear seats are leather, but the rest of the interior is either vinyl-covered (door panels, rear seat armrests, seat backs, sun visors, and top boot) or painted to match the leather (dash and other exposed metal parts).

04. In 2005, I photographed this ’64½ convertible for a feature in this magazine. This special-order convertible was delivered to its original owner with leather seats.

05. The leather seats—front and rear—in this ’64½ convertible were unrestored and came with this car brand new. They are standard issue. The leather held up very well.

06. The door panel inserts in the special order green ’64½ convertible are also leather and a strong contrast to the painted metal.

08. Fresh from the paint shop, we unloaded the Poppy Red ’65 off the trailer, ready for the interior installation.

09. The bucket seats were missing in my ’65 convertible, so we started with a pair of ’65 model black buckets.

10. We installed new foam cushions, the same ones used for vinyl seats.

11. The leather upholstery is no different in design or size than vinyl.

12. Bob Becker said the leather was “a little stouter” and thus required a little more muscle to pull over the new foam. In other words, leather doesn’t stretch as much as vinyl.

13. However, leather upholstery installation is no different from vinyl. For example, hog rings install the exact same way.

14. The running Pony inserts are still vinyl but Distinctive told us they offer leather inserts for a $100 upcharge.

15. Completed, the leather fit taut over new foam on the seat back.

16. There is also no difference mounting the hardware.

17. The seat back covers come covered in vinyl, but they still match the color of the leather.

18. Of course, the sun visors are also vinyl covered and match the Parchment interior.

19. The rear seat armrest covers are not available in leather, so we used vinyl.

20. Covering these rear seat armrest fiberglass panels proved difficult and time-consuming. We wrote and photographed an entire article on how to do this job in a previous issue of Mustang Monthly.

21. Even though the rear armrest covers are vinyl, they blend very well with the leather on the seats.

22. We dyed the door panels to match the seats with dye that was color-matched to the upholstery by our local paint store. They have a machine that puts the dye in a spray can. We also painted the metal areas of the door (and the dash) with paint that this same store also color-matched for us.

23. The result is a deluxe, Pony seat, interior. The top boot is standard issue Parchment vinyl, very much like the Scott Drake Pay It Forward Mustang convertible.

Lyn Adams is the original owner of her 1965 Mustang convertible and has put over 500,000 miles on it!