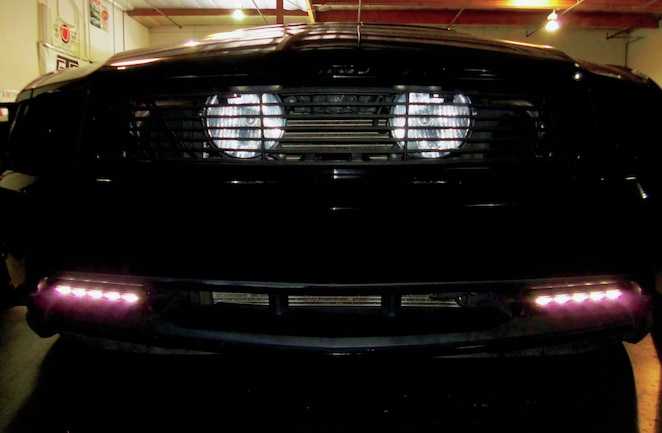 Over the years, bringing you the latest scoop on performance-oriented, bolt-on upgrades for late-model Mustangs has been our norm for Tech Inspection. Occasionally we'll highlight a suspension component, or maybe even an appearance enhancement of some sort, but seldom does a mod designed for safety find itself front-and-center as the featured how-to project for this section of 5.0 Mustang & Super Fords. Well, this month's project is definitely geared toward safety-minded 'Stangbangers, as well as those who simply want to make a cool, subtle, tasteful-looking change to their '10-'12 Mustang GT's fascia.

Installing Raxiom's Daytime Running Lamp system (PN 100160; $349.99), starts with acquiring the simple setup from AmericanMuscle.com. DRLs (moderately bright lights that are on while driving in daylight) increase the amount of time other drivers have to react to your Mustang in an emergency. They also allow other drivers to see your car more clearly when merging or turning. Statistics show they reduce daytime accidents by 18 percent.

Inside the box is the small collection of plug-and-play lights and wiring that comprises the DRL kit, as well as easy-to-follow instructions that make installing the lights an effort that doesn't take too much time to accomplish. The task can be handled in the confines of a home shop or garage.

Once again, we called on our partners at GTR High Performance in Rancho Cucamonga, California, for assistance with locating a good candidate for the project. The accompanying photos and captions focus on the highlights of the DRL installation, which Ricardo performed on a 2011 Ford Mustang GT.

1. Ricardo Topete of GTR High Performance secures one of Raxiom’s new daytime running lamps in the lower grille of an ’11 Mustang GT. The black Pony already sports a pair of driving lights behind the grille. However, the extra illumination is for making things brighter at night. Our focus for now is in the lower portion of the ‘Stang’s grille, in pockets at both corners that are typically filled by (optional) foglights.

2. The black Pony already sports a pair of driving lights behind the grille. However, the extra illumination is for making things brighter at night. Our focus for now is in the lower portion of the ‘Stang’s grille, in pockets at both corners that are typically filled by (optional) foglights.

3. Here’s a parts breakdown of Raxiom’s ’10-’12 Mustang GT Daytime Running Lamp system (PN 100160; $349.99), which features a pair of LED lights (white) and control module. The package is simple and includes all of the wire, electrical connectors, and even zip-ties necessary for an installation project that should take about two hours to accomplish. Not shown are the bezels and mounting brackets for the lights. (You can see examples of these items are elsewhere in this report).

4. Before starting, Ricardo disconnects the negative battery cable, and mounts the system’s control module near the Mustang’s fuse panel using Velcro provided in the kit. Wiring tasks involve securing a good ground, tapping an additional fuse into the #39 position in the panel, and splicing into the OEM wiring harness (purple/white wire) with a supplied T-tap. Electrical requirements are completely plug-and-play from there, and harness-to-lights extensions for getting it all done are included.

5a-b. Rubber templates index the locations for three 3⁄4-inch holes that must be bored into the left and right panels in the lower grille. These are for the brackets that secure the lights. After making 5⁄32-inch pilot holes, Ricardo drills from the front and back of the fascia with a right-angle drill. Yes, the final holes are big, but the DRL assemblies fully cover the openings once they’re in place.

6. The daytime running lamps fit inside clean, molded-plastic bezels that are secured to the lights with Phillips-head screws. Each light also receives two 3mm Allen studs for securing the assemblies to their mounting brackets.

7a-b. Mounting brackets are installed from the backside of the bumper, and the lights and wiring are mated to and passed through the panel from the front. Nyloc nuts and lock washers are included for securing the DRLs to the fascia.

8. Here’s our test Pony, ready for daytime driving with Raxiom’s Daytime Running Lamp system installed and illuminated. DRLs help increase your Mustang’s visibility to other drivers, making them a wonderful upgrade. It not only improves safety, but it looks good doing it.