How to Upgrade the AC Compressor on a 1966 Ford Mustang 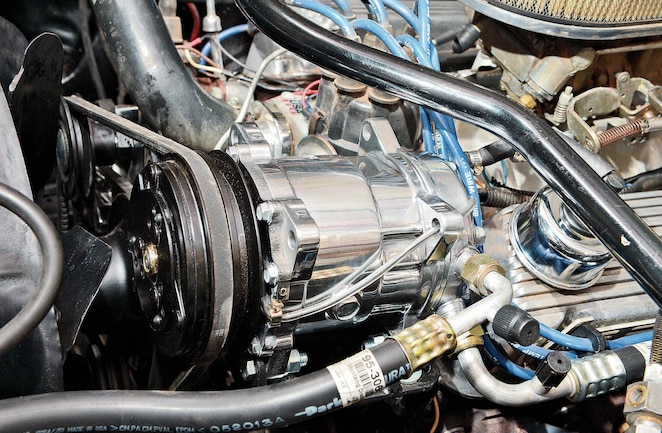 Neil Thompson has been upgrading the 289 under the hood of his '66 coupe for quite some time. Current upgrades include a chrome alternator, an Edelbrock aluminum intake topped by a Holley four-barrel carburetor, and a custom billet aluminum air cleaner housing to spice things up.

The ancient factory A/C compressor looked out of place in the updated shiny engine bay, not to mention a major power drag on the 289 when the clutch engages. That's why Neil had long ago disconnected the compressor and opted to sweat through the summers on the South Plains of Texas to give the 289 a little more power.

The A/C system in this ’66 had not had a charge in years, but if your system still holds R-12 it must be reclaimed by an A/C shop before you open the system. Remove the OEM A/C compressor by disconnecting the single clutch wire, suction and discharge hoses, and the bolts from the bottom bracket. Leave the factory idler assembly and bottom bracket on the front of the cylinder head.

What he needed was a modern axial A/C compressor, so we called up the guys at Scott Drake and ordered one its compressor conversion kits (PN 50-3066) for Neil's '66 Mustang. The kit is designed to fit the 289 and stock A/C hardware and fits his needs perfectly. The Sanden compressor in this kit is small and efficient, plus Neil ordered his compressor polished to add a little more shine to the already spiffed up engine bay. Now, his Mustang's engine bay will look as cool as he'll feel when the A/C is turned on.

A professional mechanic by trade, Thompson led us through the steps to remove the old compressor and install a new one. However, the general removal and installation steps are very basic and only require your typical hand tools. You can easily convert your Mustang's stock A/C system over to the more efficient Sanden setup and then hit up a local A/C repair shop to have them handle the evacuation and recharging of the system per the kit's instructions.

Remove the grille and hood latch assembly to gain access to the A/C condenser. The condenser must be removed in order to replace the condenser-mounted drier assembly. Disconnect the condenser’s lines and unbolt it from the core support to remove it.

Remove the old drier from the condenser. Inspect the condenser to make sure the fins are attached to the tubes. Loose fins will decrease cooling capacity, in which case the condenser should be replaced. The old condenser must be flushed of any contaminants. Neil is a professional mechanic and recommends using rubbing alcohol as a flushing agent.

The kit comes with a new rubber grommet that seals the low side and high side A/C system hoses through the firewall opening. A two-piece metal retainer is included and is utilized to secure the grommet to the firewall.

Neil took an extra hour to mask off his engine bay, bag his engine, rough up the inner fender aprons and firewall with sandpaper, and then re-painted the engine bay with a few cans of satin black. The new polished compressor motivated him to paint his engine bay, a job he has wanted to do for a long time.

You must install the kit’s included R-134-based drier to your condenser or you will void the kit’s warranty. Ensure the drier O-rings are in place and lubricated with assembly oil and secure the drier into the condenser bracket.

Install the condenser with the new drier attached and secure with the original mounting hardware. You can also reinstall the hood latch and grille assembly at this time as well.

The new tensioner included in the kit is installed on the passenger side of the water pump and includes new, longer bolts to secure the tensioner to the engine.

Bolt the compressor to the OEM mounting base still attached to the front of the driver’s side cylinder head. Leave the bolts loose enough to allow compressor movement fore and aft for belt/pulley alignment.

Tighten the fittings for the suction hose (seen here) followed by the high side hose and then connect the clutch wire to the compressor clutch.

Slip a new A/C belt over the pulleys and snug the tensioner up a little. With the belt snug adjust the compressor fore or aft to achieve the best belt alignment and then tighten the compressor mounting bolts securely. Finish the installation by checking and resetting the belt tension and then having the updated system evacuated and charged with the proper amount of R-134 refrigerant by a qualified A/C shop.