Ford Built Them, Then Installed Them at Least That's What We Think 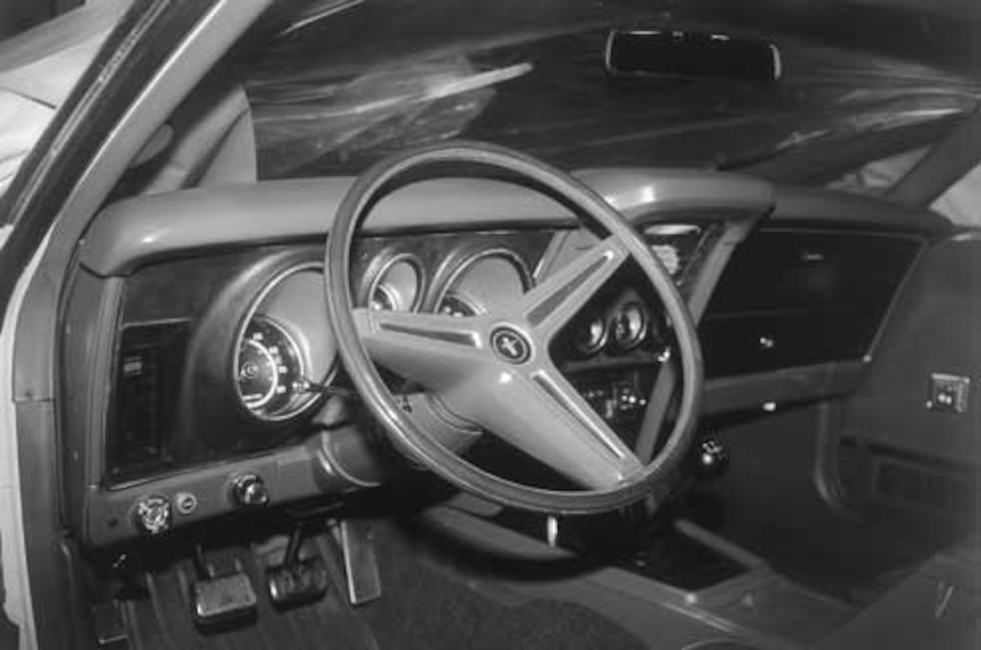 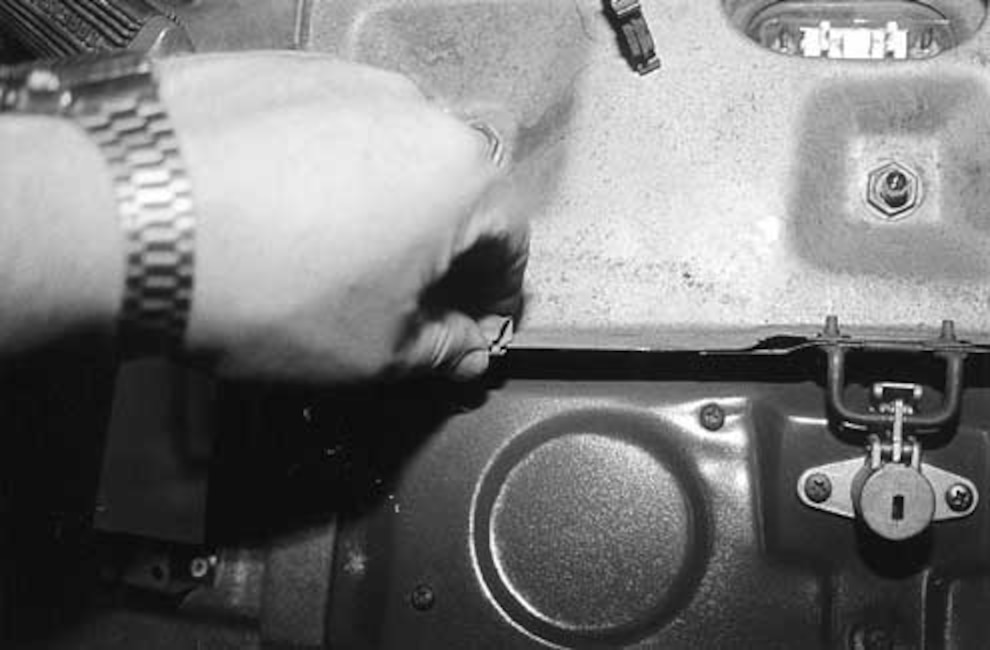 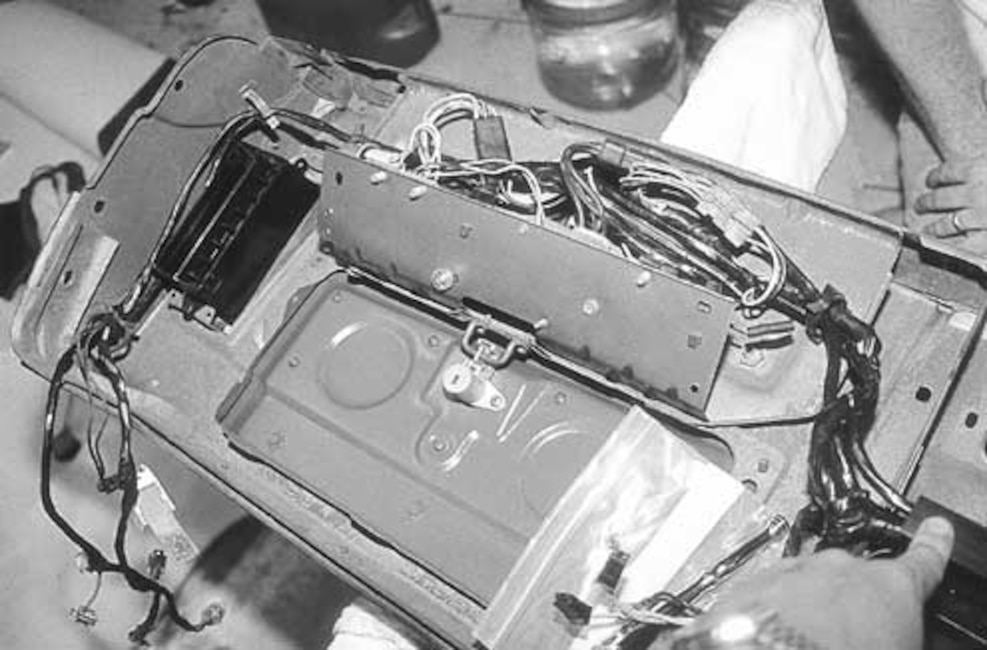 The buzzer board, which houses all those annoying warning buzzers, was cleaned, bead-blasted, and painted detail gray. It was then installed, along with the cleaned main and secondary harnesses. Note the air conditioning registers on the left. These were not disassembled, but were meticulously cleaned with cotton swabs and Krud Kutter. Luckily, all of our fiber insulators were in good shape. 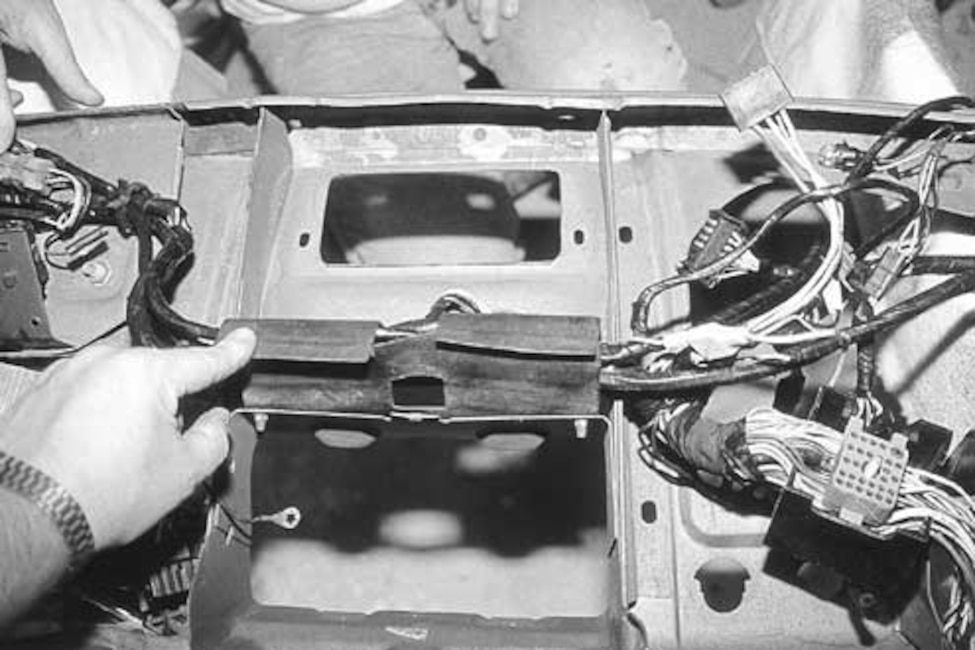 All the plugs on the panel are specific, leaving little danger of plugging something in wrong; but the clips, the clamps, and the grounds are another matter. It took a couple attempts to position the wiring harness as it was originally. Like any good wire bundle, no matter how carefully you lay it in a box, it will tangle. 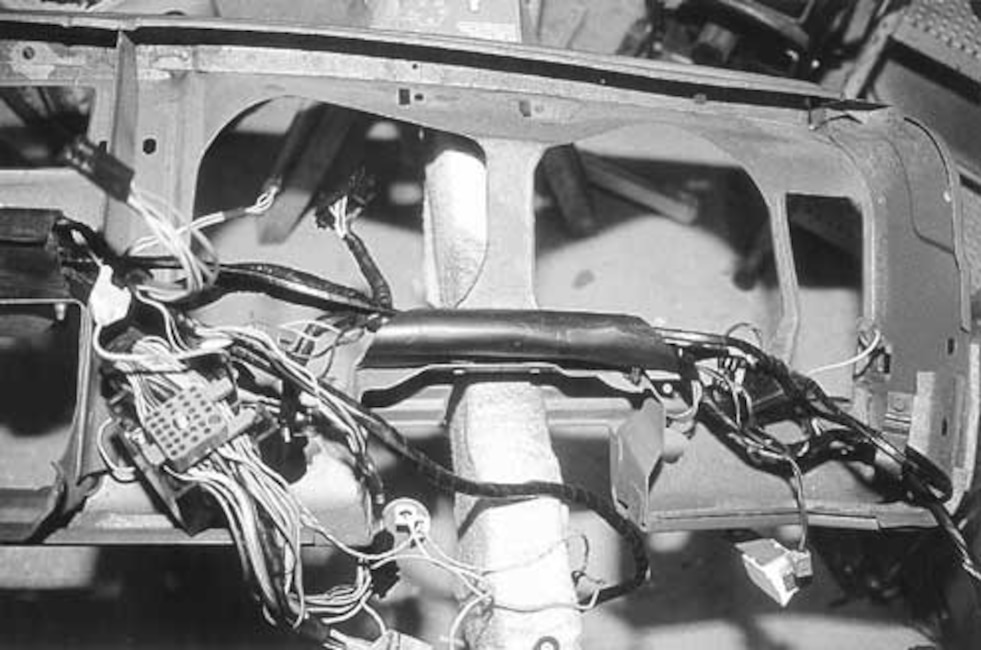 We were careful to place everything where it was supposed to go on the dash before installation. Note how the panel is sitting on the sawhorse. At this point, the camera case panel for the passenger side is installed. Our panel’s chrome was in poor condition; therefore, we used our handy aluminum duct tape to bring it back up to snuff. In a pinch, chrome paint will work too. Next, we installed all of the accessories, the lighting, the wiper, and the lighter knobs, after rolling the dash assembly on its back. We mistakenly installed the gauge panel at this time; however, we recommend that you leave it off until the panel is in the car. 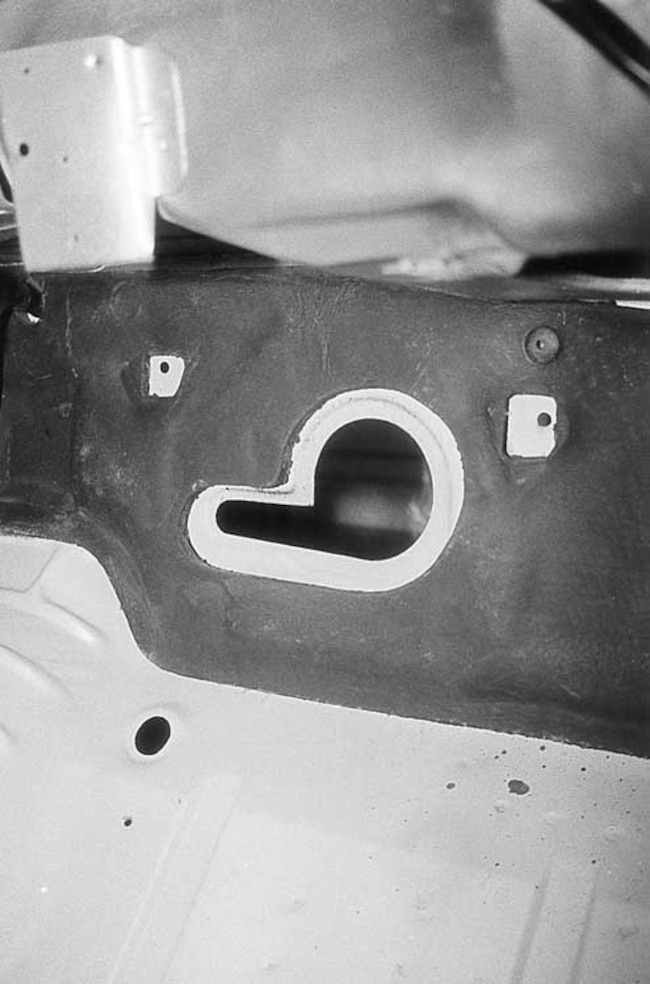 Our firewall insulator pad was in super shape and only required cleaning. Before we installed it, we faked some factory laziness by spraying red iron oxide and silver in corners and on areas that had appeared this way in our car originally. Will anyone see them? Probably not. Will we know they look correct? Yep. 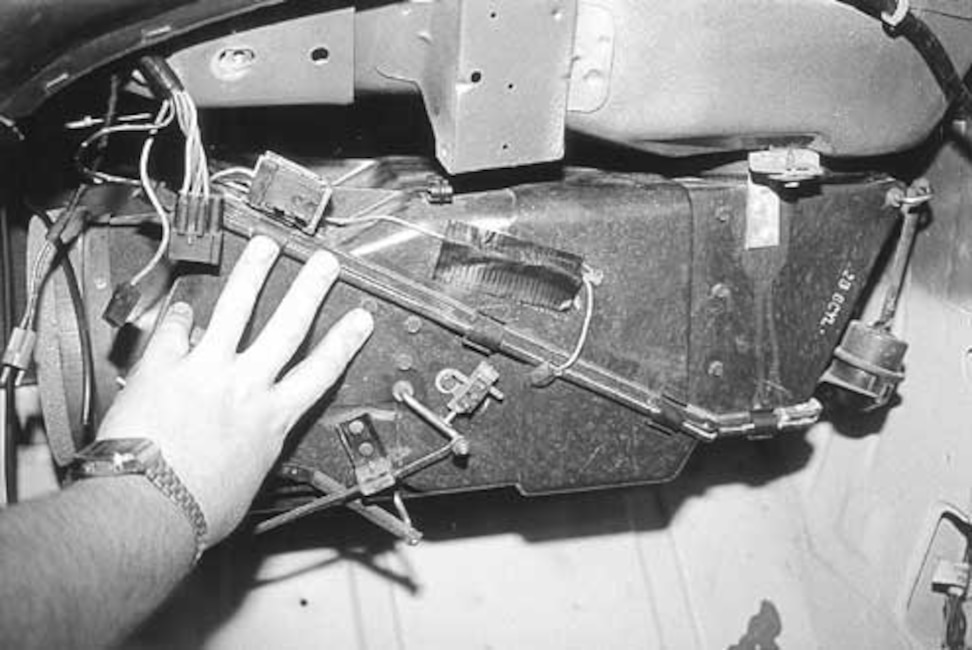 We set in our cleaned defroster ducting, then moved on to the restored air conditioning case. This case was reconditioned in the Sept. ’97 issue (“How To: ’71-’73 Heater Case Restoration,” p. 58). Note the wire plug above our pinky finger. This main wire feed to the air system caused some havoc later because we failed to plug it in. Be sure you get all the connections correct the first time; otherwise, you’ll be chasing wiring gremlins under the dash while laying on your back. 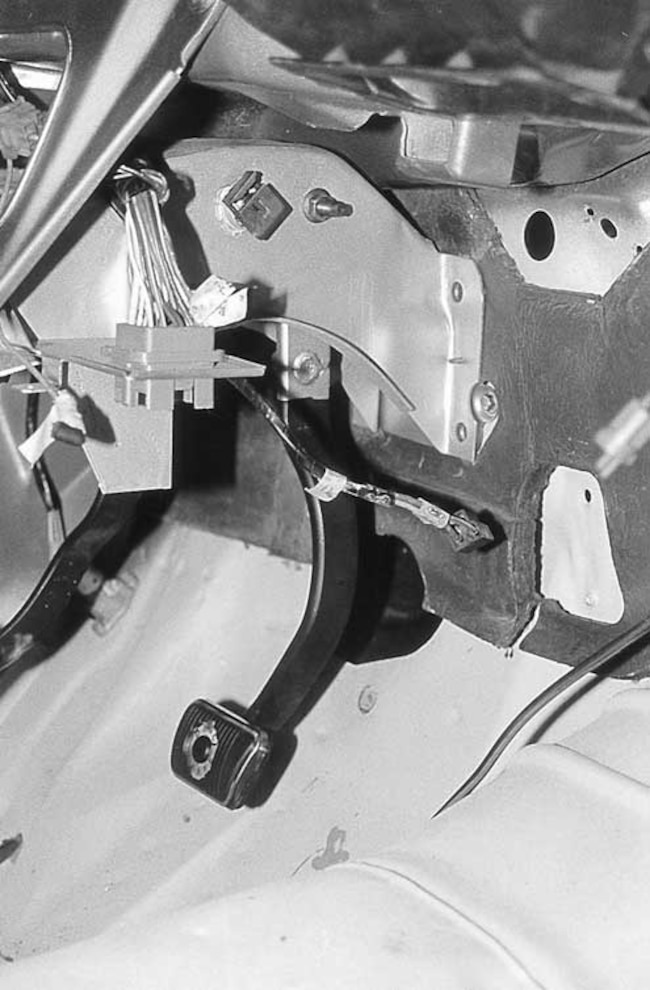 We skipped over to the driver side for a change of pace. Here we installed our reconditioned pedal support and new pedal pads and brightwork from Dallas Mustang. The support was painted steel, and the pedal arms were painted semigloss black. 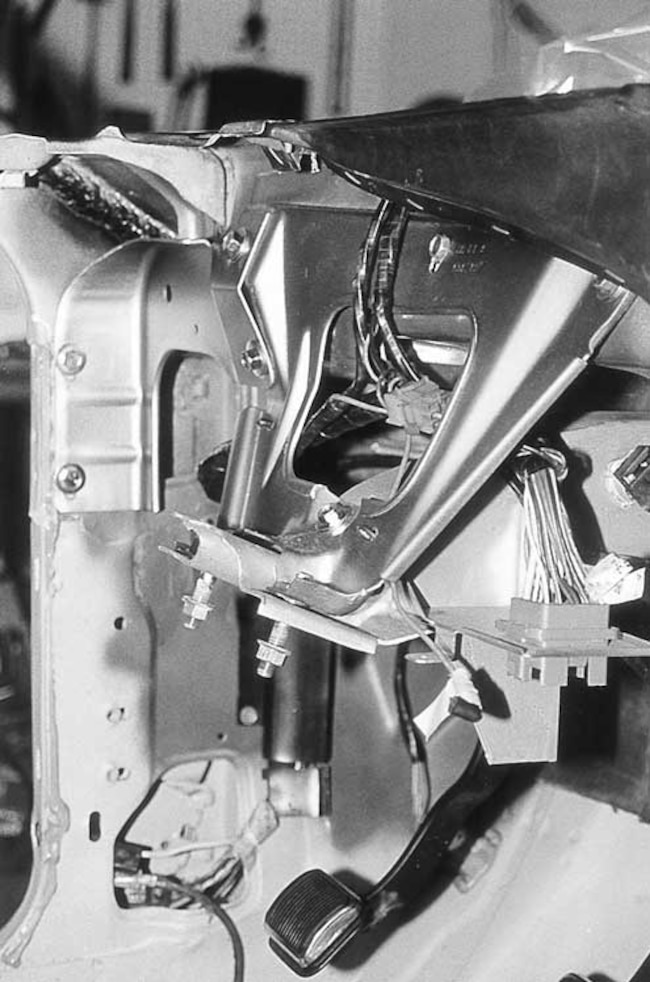 The main column support and the side brace were painted detail gray for contrast. Note the red iron oxide paint and detail gray. Also note the AMK gold-cad fasteners that hold the column support together. At this point, we finished wiring the chassis side of the harness. 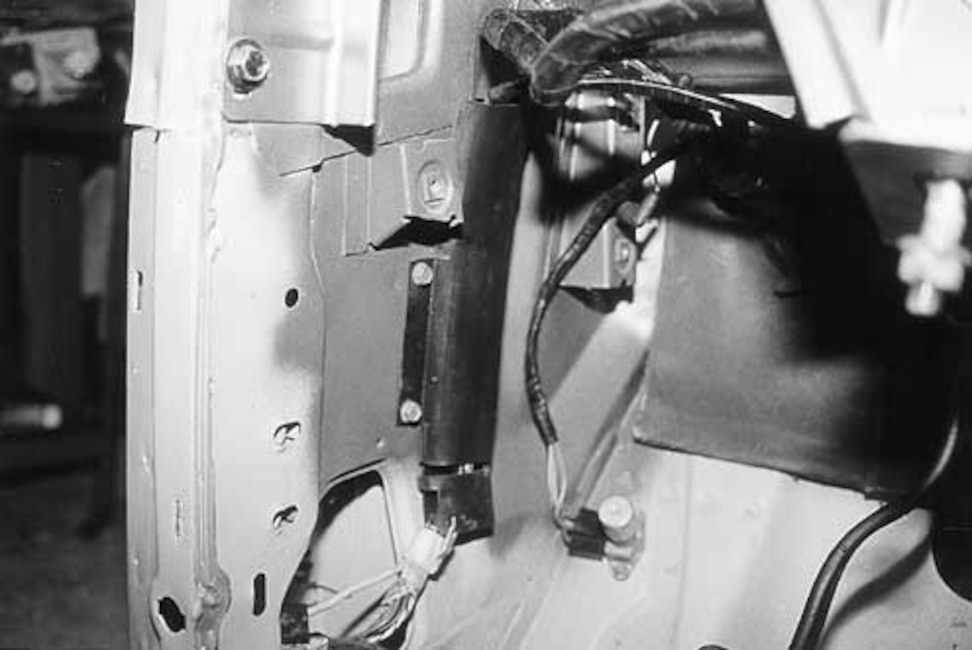 Wherever we thought there might be a chance of seeing our tan primer, we hit the area with red oxide or silver or some Medium Bright Yellow. 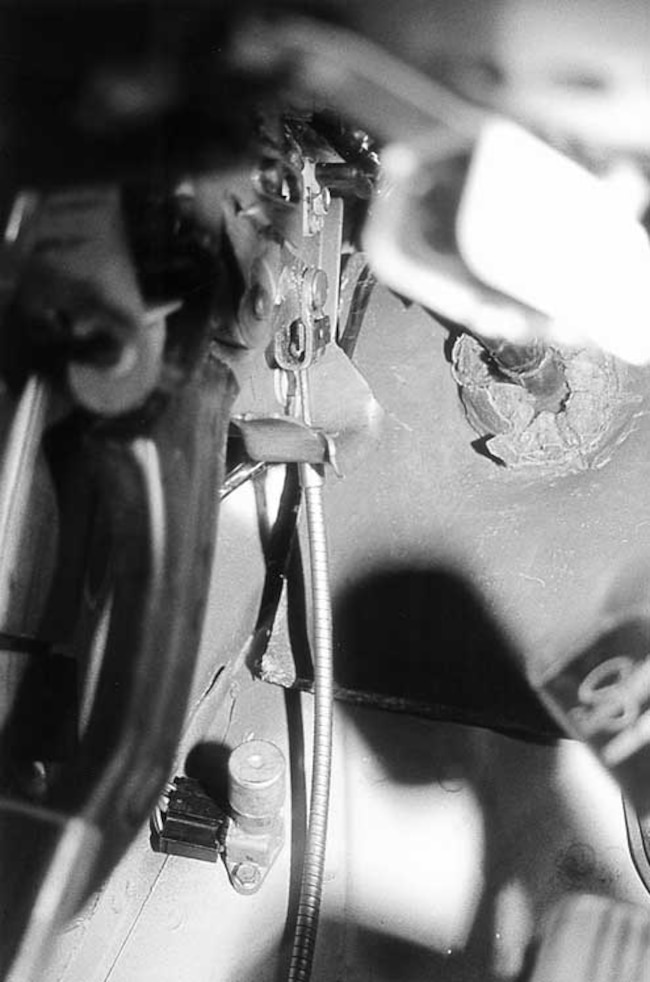 Though a little hard to make out, this is the emergency brake assembly. This is probably the only part on the car that didn’t receive a coat of paint. With all the intricacies and moving parts, we thought that greasing it would do just fine. 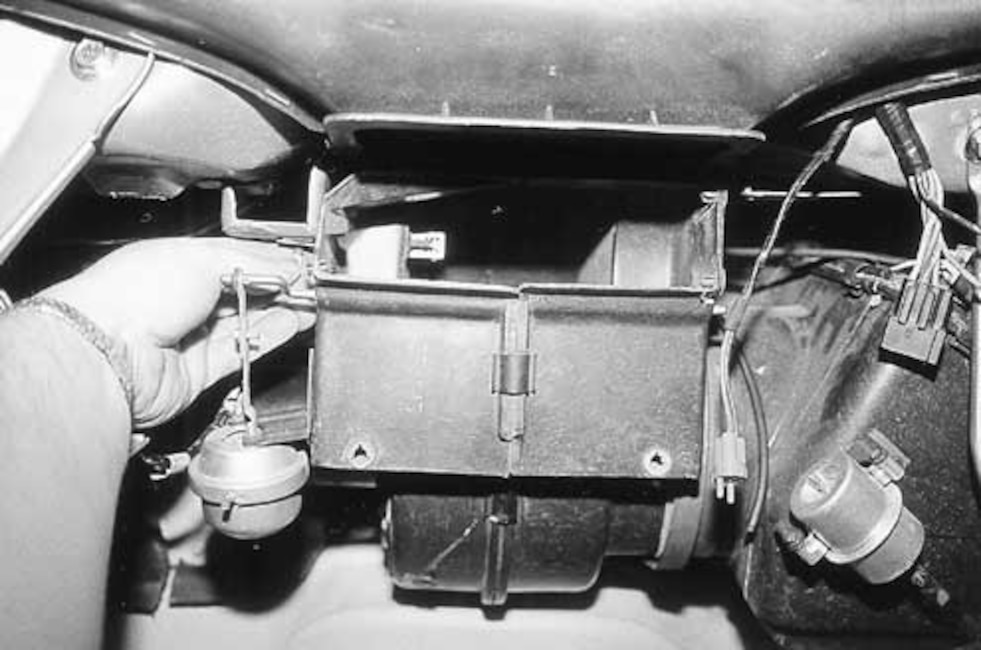 We now moved back to our air conditioning system and installed the blower housing. Note that the clips for the floor vents are in the case. We realized that the best place to store bolts is in their original holes—if possible. 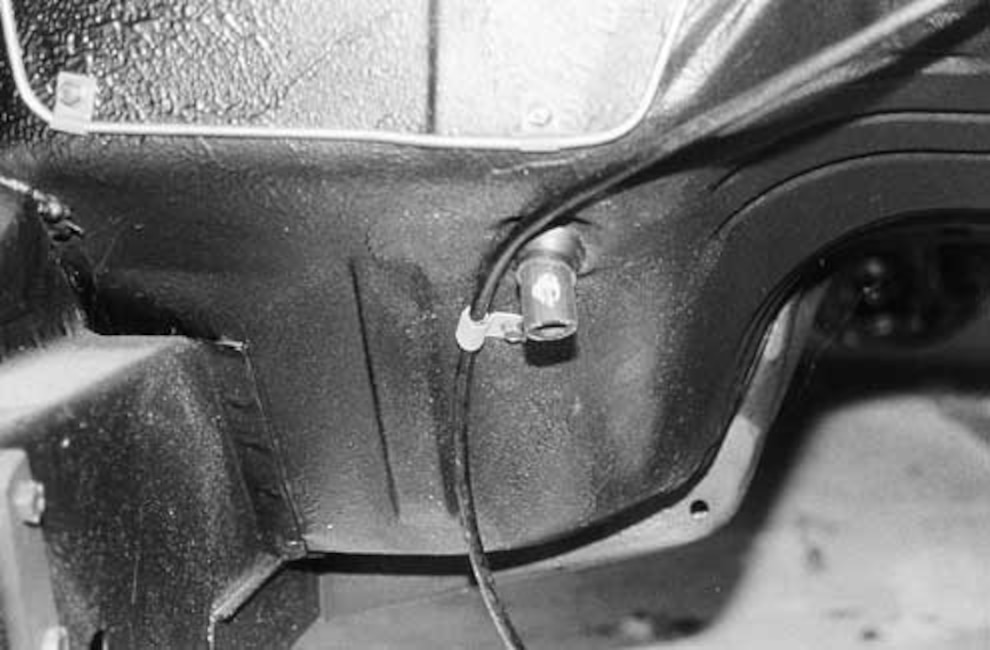 After the air system was tucked in, we installed the floor grommet and the drain. We also ran the speedo cable. We confess that this was accomplished prior to our engine installation but could just as easily be accomplished later. 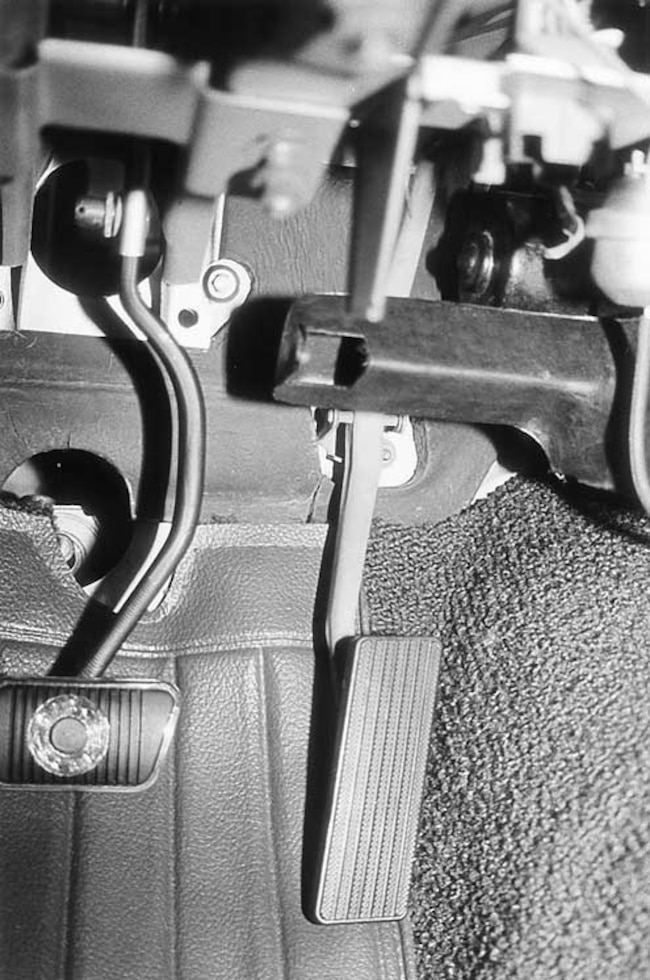 Our refinished gas pedal was installed next, and just for grins, we plopped down our carpet from Dallas Mustang. The gas pedal pad is new old stock and was bought a couple of years back at a swap meet. 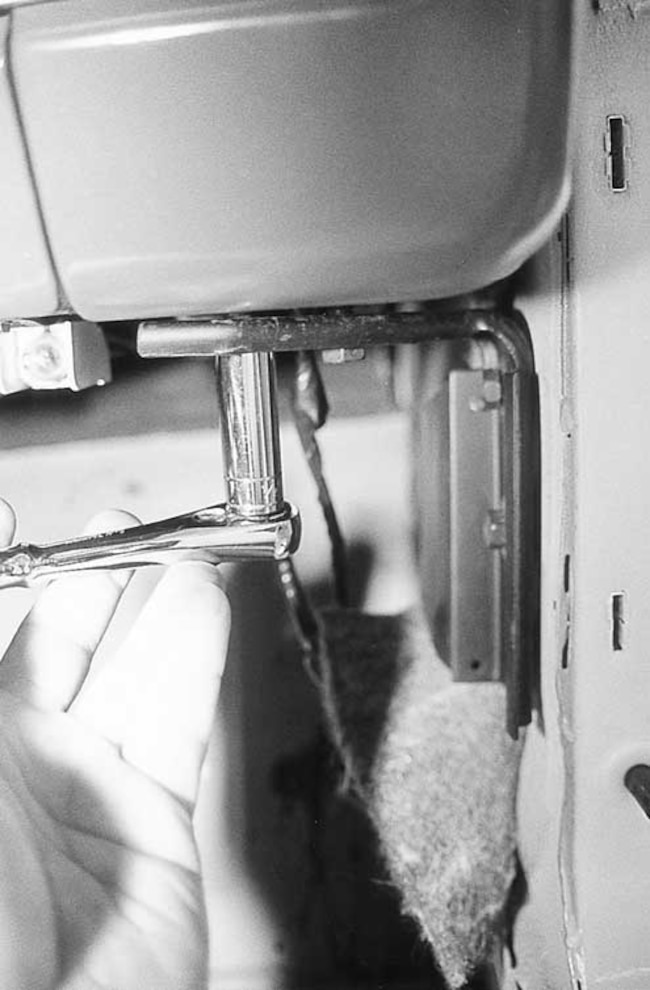 After much grunting and sweating, the dashpanel was heaved into position. These brackets were painted semigloss black and set back into their original position. After this was completed, we began to attach the chassis harness to the dash harness. 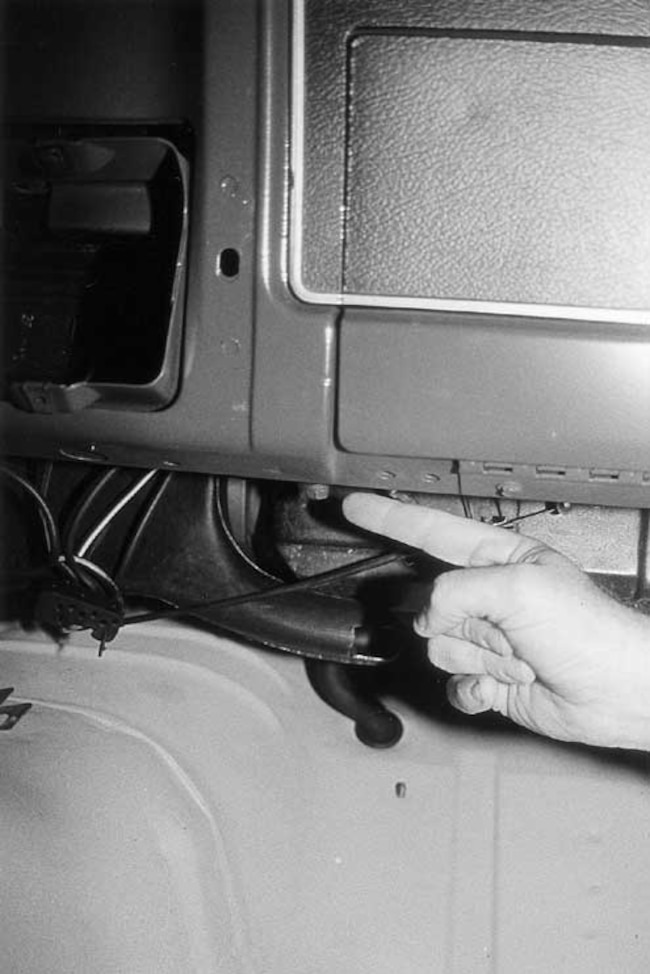 There are several bracing positions on the dashpanel, though this is the major center brace. Make sure all of these are hooked up and tightened; otherwise, you’ll have dash noise. 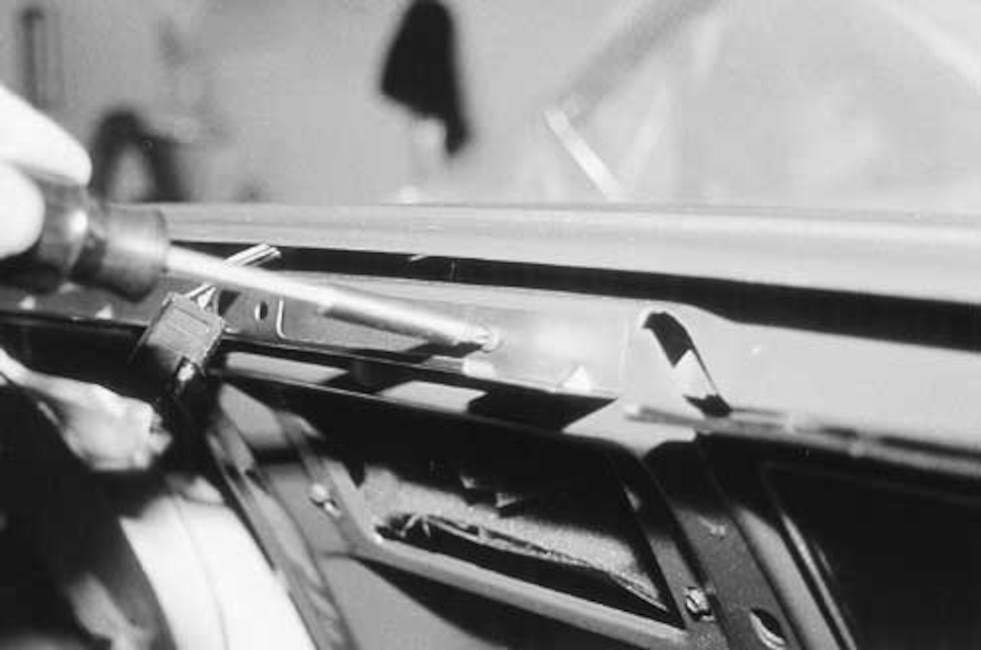 Our dash-trim bracket was a casualty of our several moves. A new—well, used but new to us—piece came from a local salvage yard. Like everything else, it saw a coat of paint—in this case, detail gray. 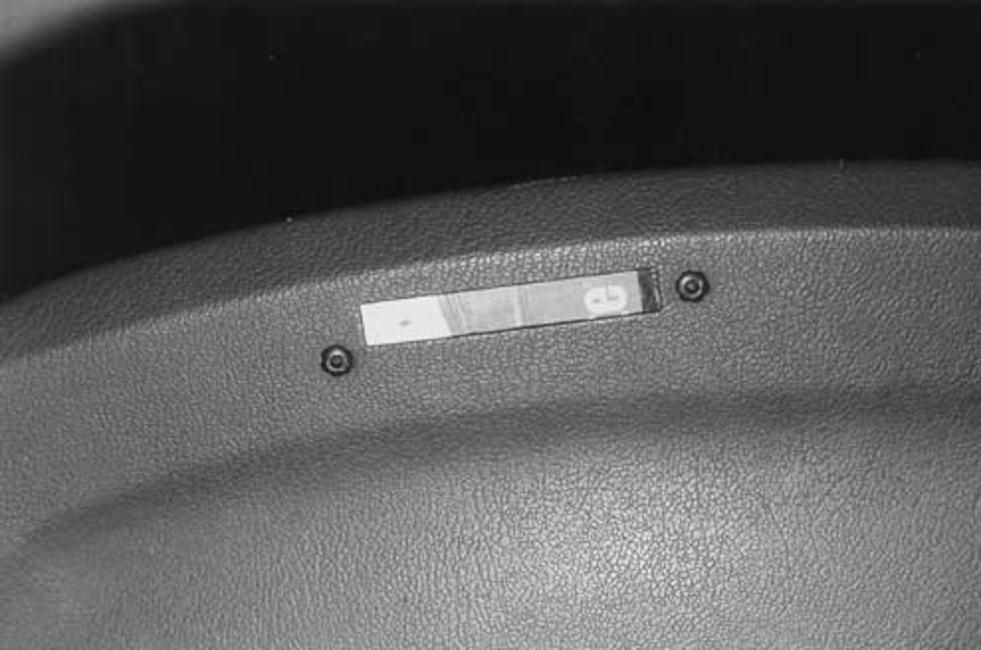 The VIN had to be covered while we sprayed the dashpanel in our semigloss Ginger. Our panel had some small rust spots on it, which were removed with steal wool and Must For Rust (800) 466-7126. After the rust was removed, we used lacquer thinner to prep the panel for paint. 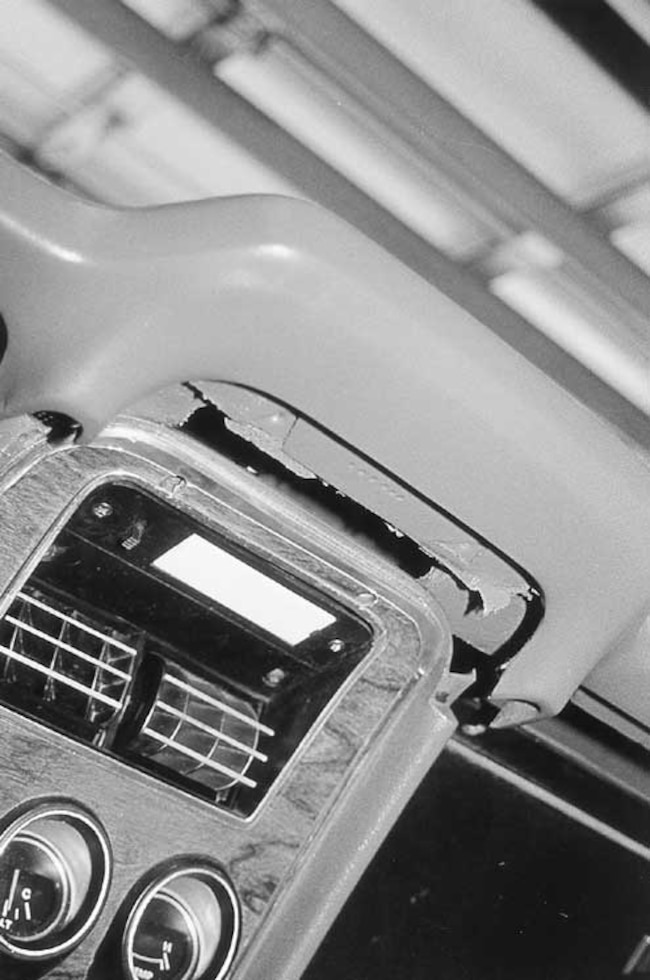 Our center panel went in next. The chrome on the panel was in poor condition as far as we were concerned. We tried using chrome-stripping tape but the Mylar wouldn’t conform to the angles, so we used our aluminum duct tape again. 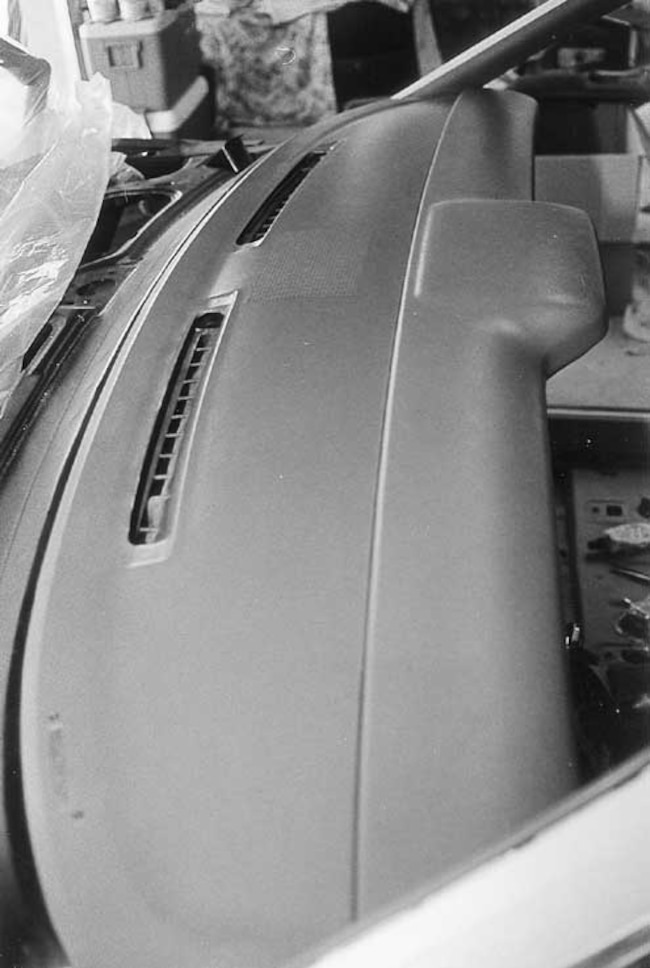 OK, we cheated again. The windshield was installed after the Just Dashes pad and dashpanel (indeed the entire interior) were installed. Note that the black from the engine bay extends up and under the panel. 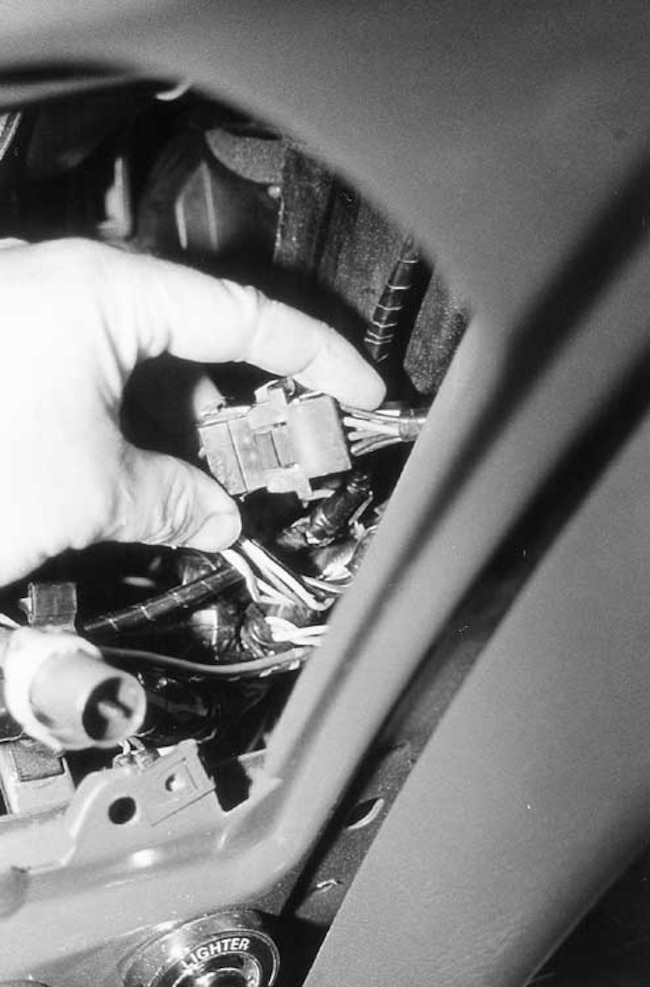 This shows why we don’t recommend installing the gauges until the panel is in. Access to some of the wire connectors is nearly impossible from under the dash, particularly to the inside as shown here. 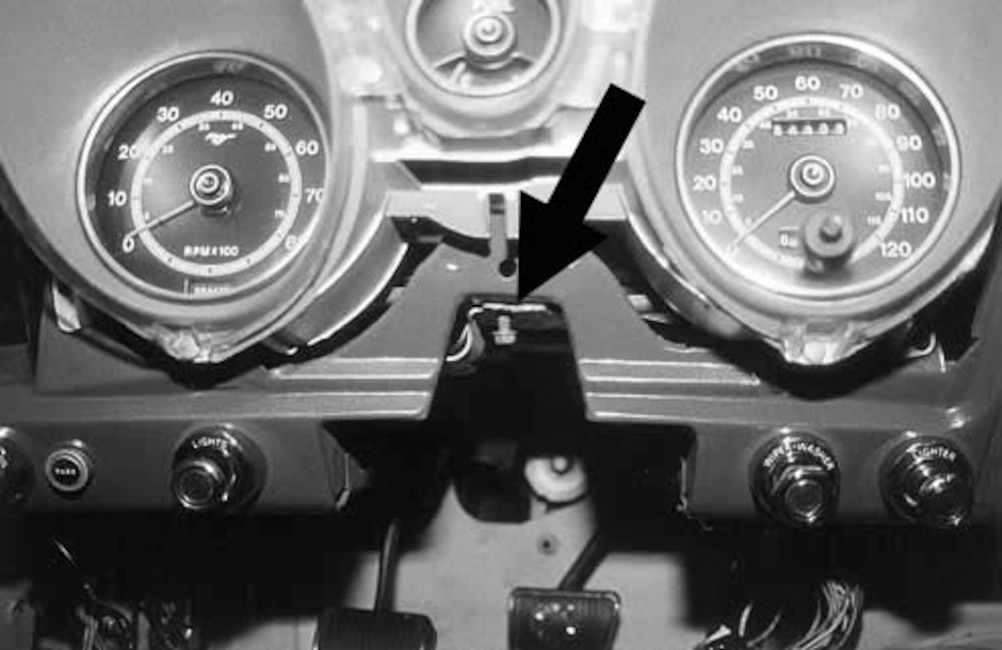 Quality is job one? This bolt that was supposed to be here (arrow) was never installed in our dashpanel at the factory and could have created a good, strong squeak. 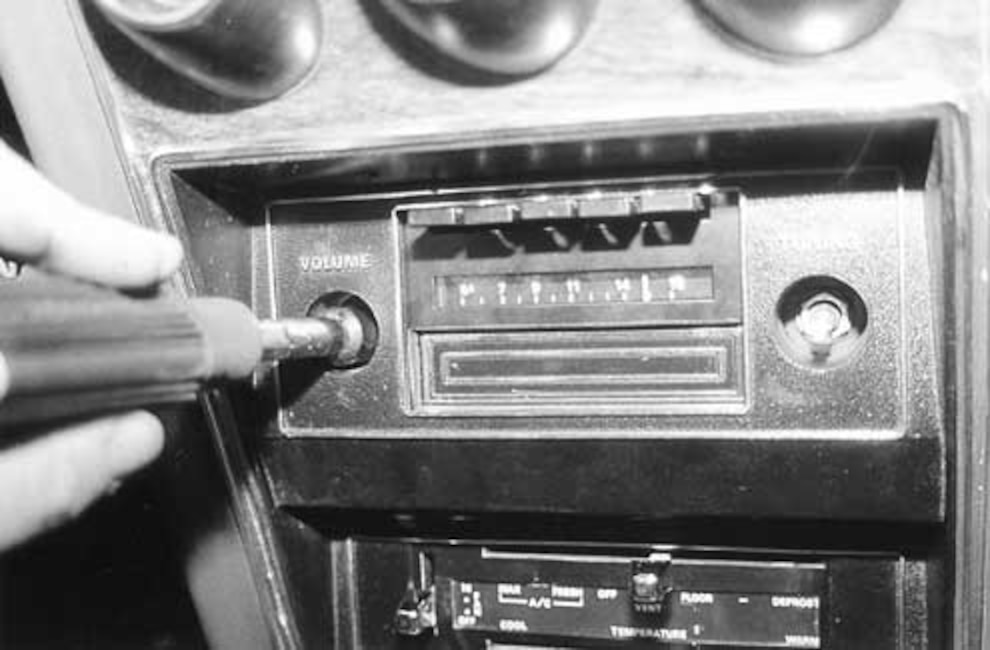 Our stock-appearing Antique Automobile Radio (727) 785-8733 AM/eight-track (now with CD sound!) was installed, along with the air conditioner control panel. At this point, we used our assembly manuals to route the vacuum hoses. 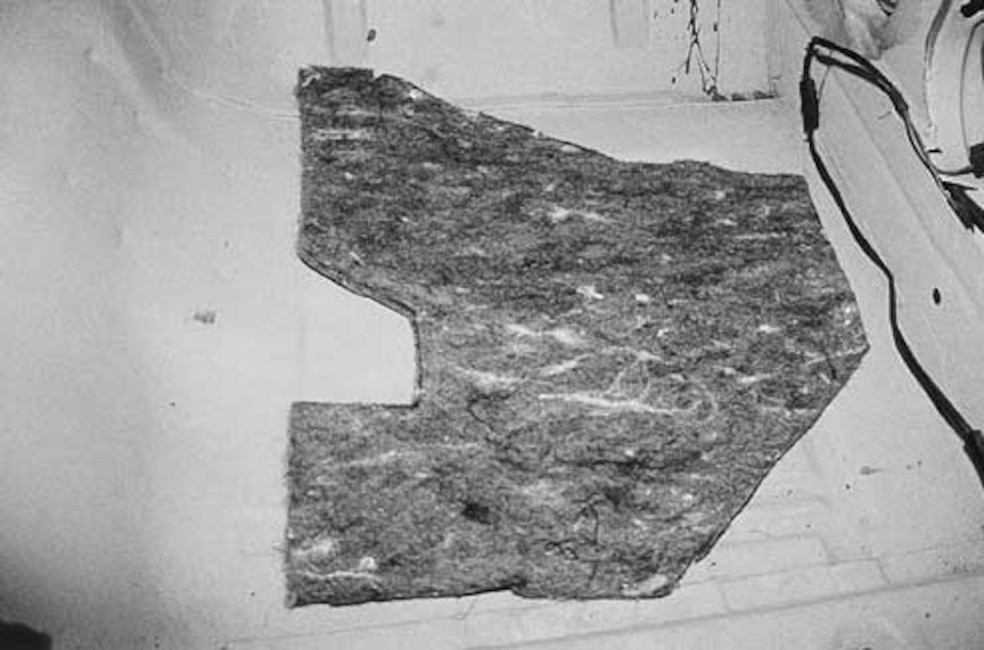 Ford applied sound deadener in the kick panels. There was just enough of our originals left on both sides for us to make a pattern. We then made ours out of the original-style jute. 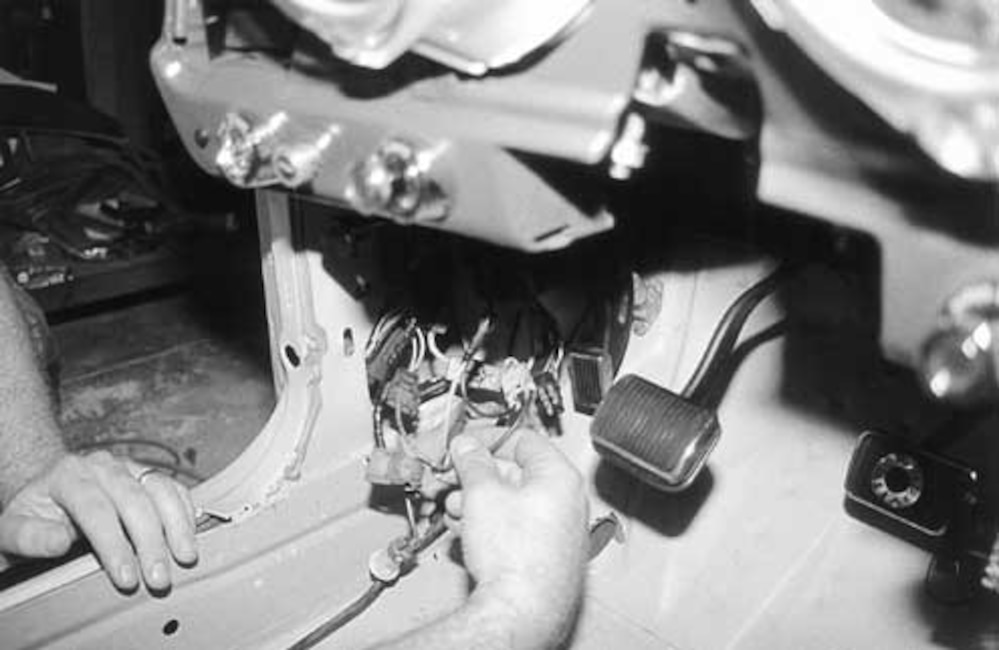 Welcome to our nightmare. This Mustang came with the Convenience Group, power windows, and a rear window defroster. We figured we have about 80 pounds of extra wire, compared to the average Mustang. 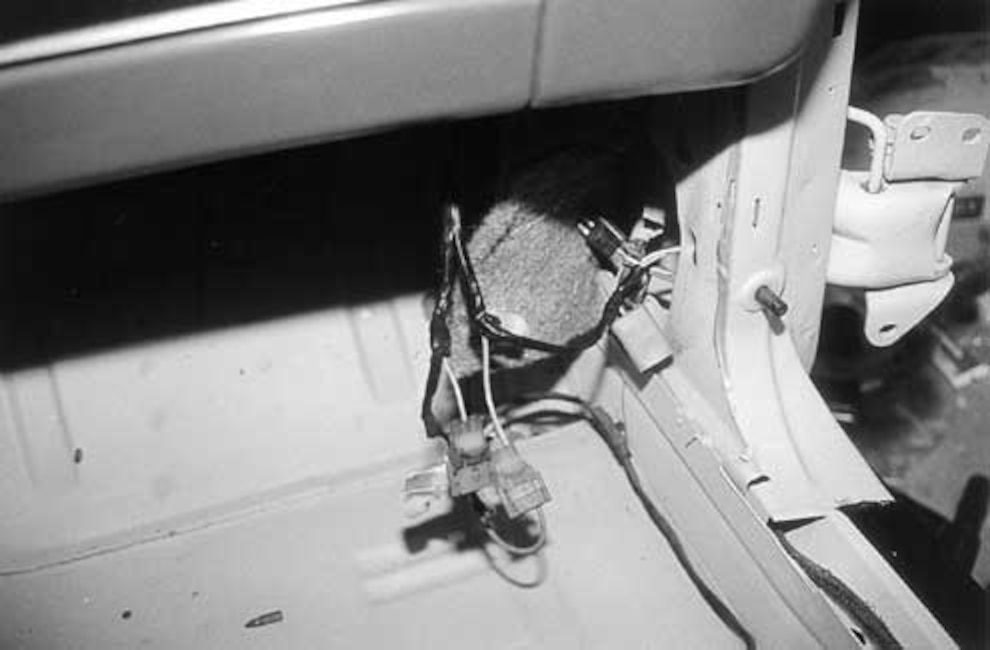 Make sure all of your connections are made. We had trouble getting the passenger-side window to roll up later. The problem was, we hadn’t hooked up the wires at the kick panel. 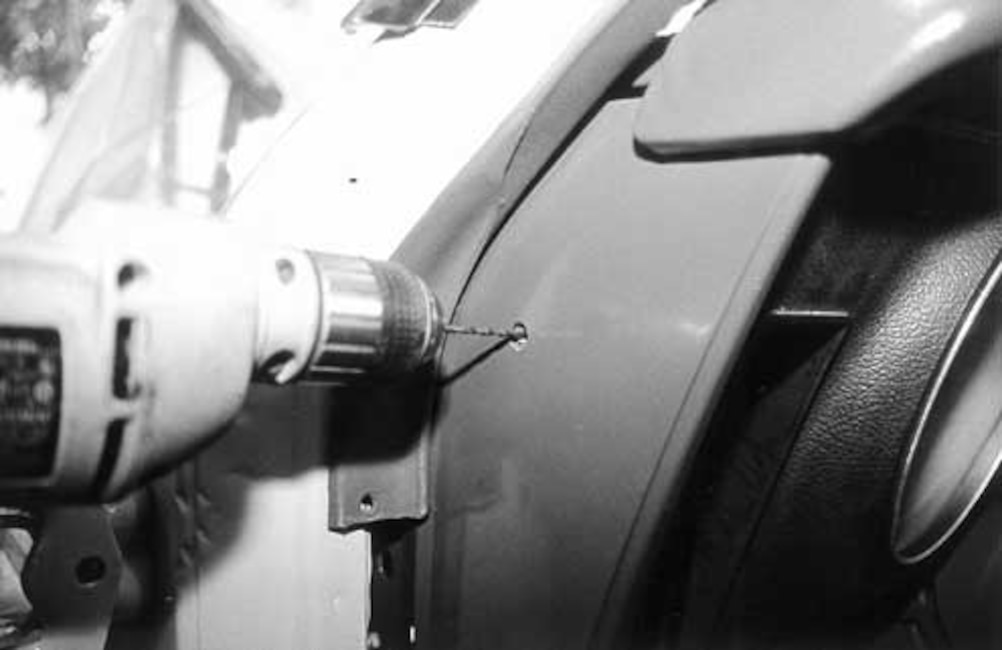 You can see the door-trim piece here. These were light ginger and, of course, were color-matched. We refinished our side panels in the correct Dark Ginger, then repositioned them so that they were nice and snug to the panel. The line worker who originally did this was off about 1/8 inch. After this, we installed the steering column and the steering wheel and were ready move onto the next stages of the project: the Sports deck seat (fold-down), the carpet, and the seats.

The ’69 Mustang interior was a definite departure from the previous years. Prior to 1969, the Mustang had a welded dashpanel that could not be removed. This, of course, created some problems with removal and installation of heater boxes and other firewall hardware. With the introduction of the ’69 models, the era of dark-hole assembly ended. Ford used the bolt-in dash for the Mustang in 1972 when the Lazarus Project (our ’72 Mach 1 project car) was assembled and still uses it today.

With the paint out of the way and the engine installed and detailed, we moved happily to the interior and, most importantly to this issue, the dash. Though there are not many parts available for the dash assemblies of these cars, there are some items that come in handy. For instance, we went to Dallas Mustang for pedal pads and brightwork. As for our dashpad, Just Dashes re-covered our original so that it fits right into our interior. Other items were gathered up over time, and some have been featured in recent months. Components—such as our refinished column, our factory-looking but modern performing radio—and small items such as a good light switch (with all its chrome in place) were bought over time.

We also discovered that assembling the dashpanel harness and its attaching parts before assembly greatly eases the frustration level. All in all, the dash now shines like new money and has all the functioning items, such as that annoying key warning buzzer and that maddening seatbelt reminder.