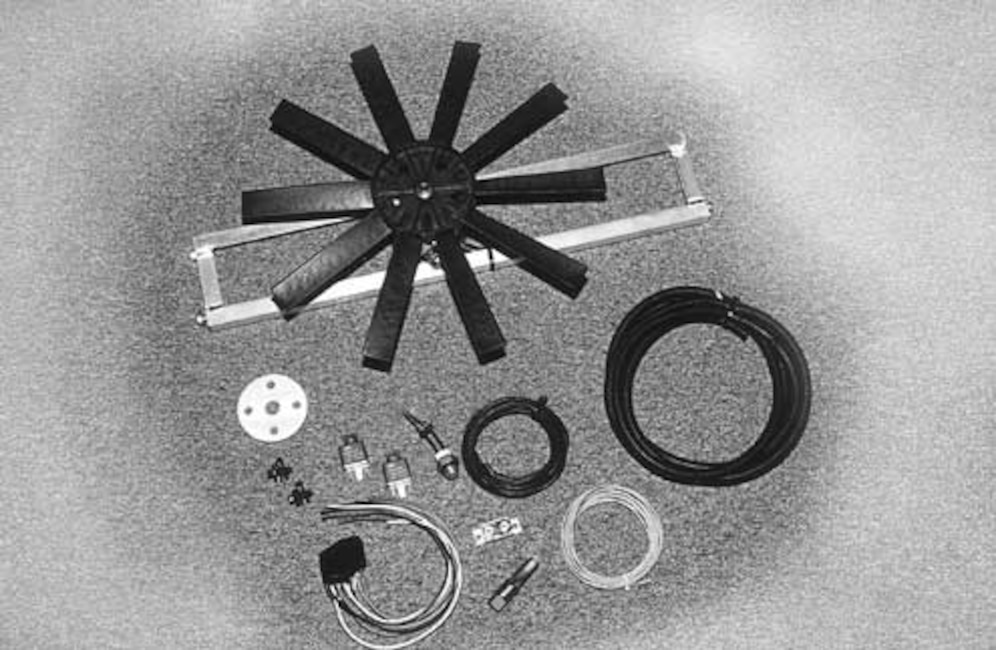 The CoolPower Supercool electric fan kit comes complete and ready to install. The fan motor assembly is preinstalled on the TIG-welded aluminum space frame, and all hardware and wiring come clearly labeled in installation bags. 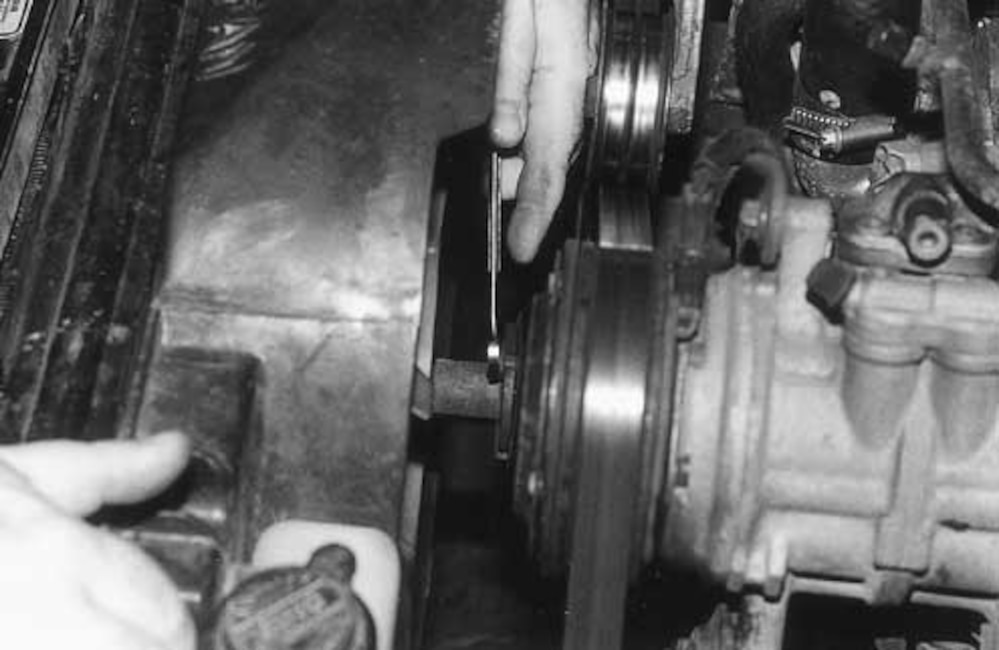 Disconnect the battery first. You will be making electrical connections soon, so it’s a good measure to do this now. Using a 7/16-inch wrench, remove the four bolts that retain the fan and the clutch to the water pump. 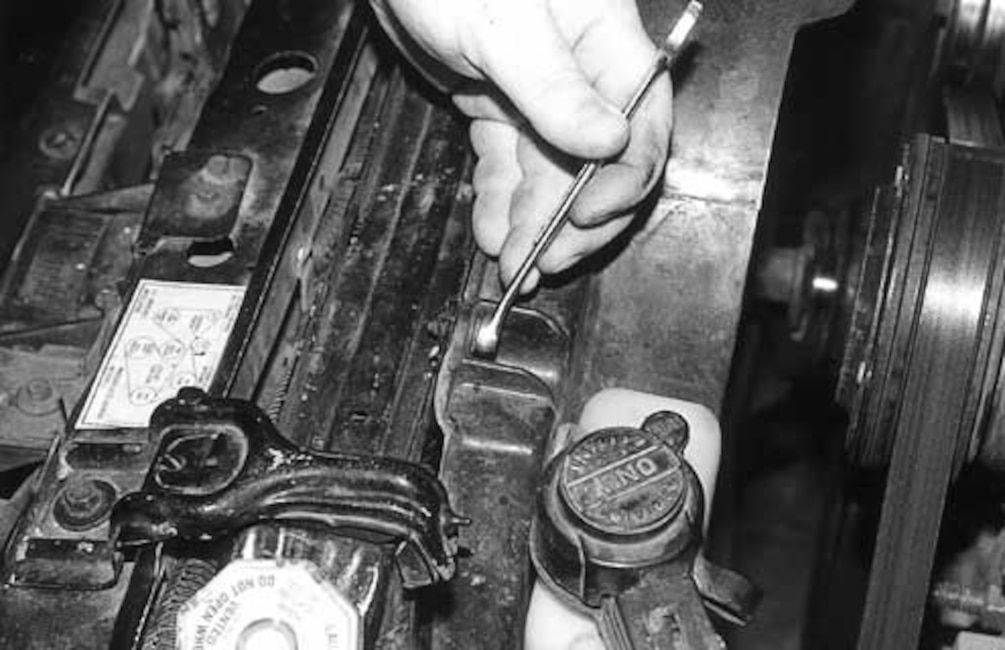 Using the same wrench, remove the two retaining bolts that hold the radiator shroud to the radiator. 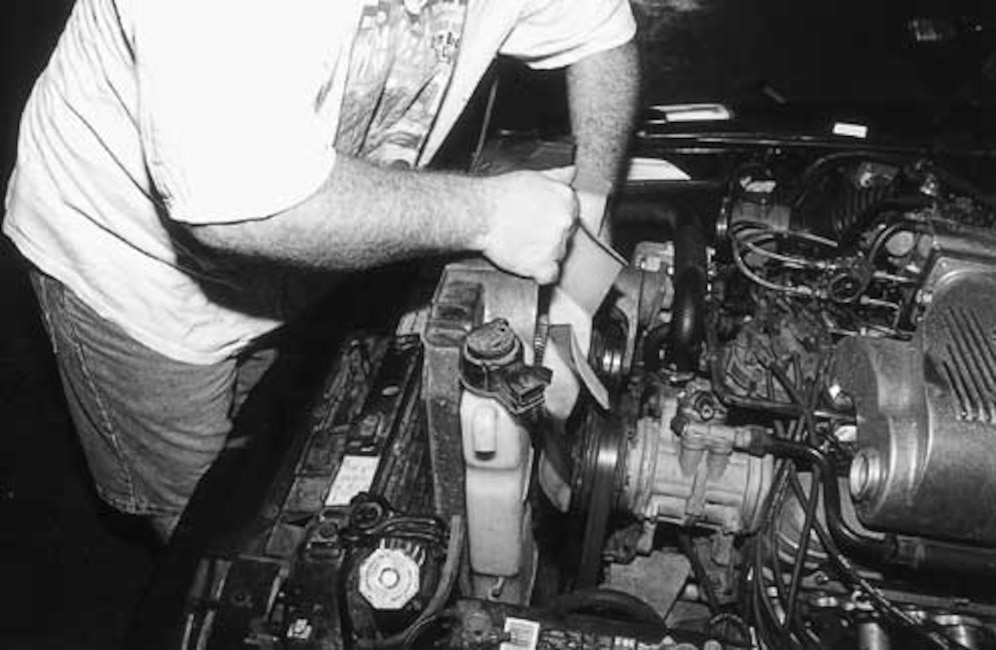 Pull the fan outward to clear the water pump hub, then lift the fan and the shroud up and out of the engine compartment as an assembly, being careful to not bump the radiator. 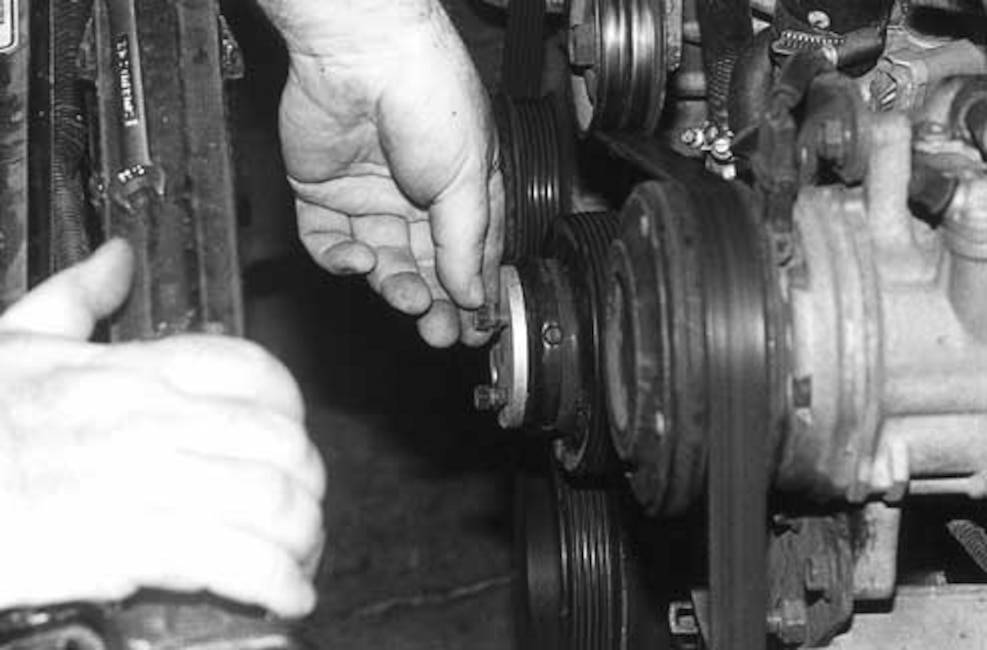 If you have thick aftermarket aluminum pulleys, this reinforcement plate is not needed; however, on stock steel pulleys this included plate needs to be placed over the water pump hub before returning the stock bolts to their location. The plate prevents the pulley from cracking around the bolt holes. 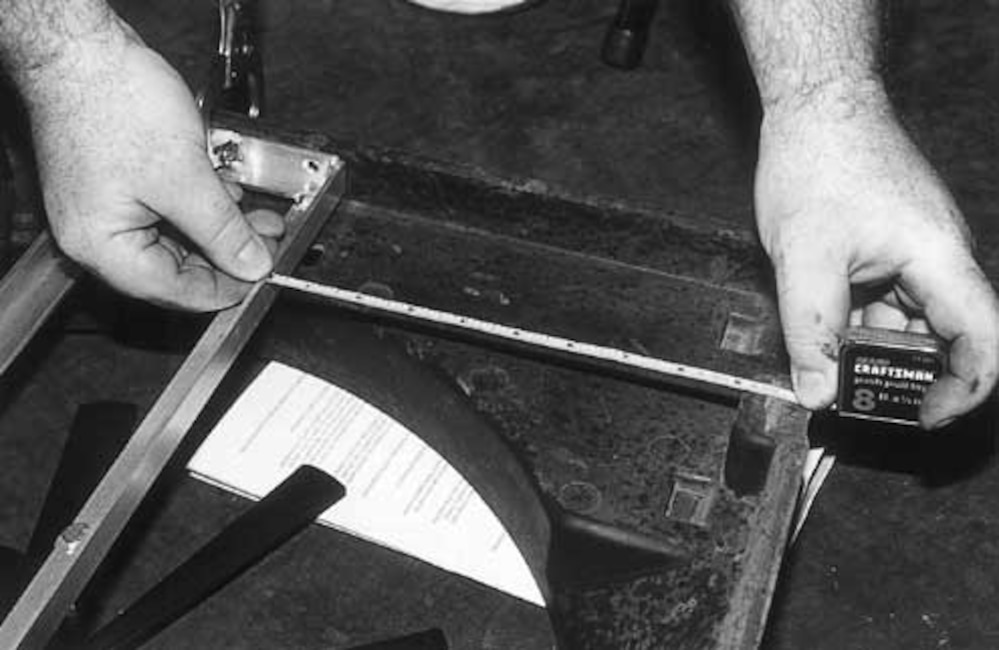 Lay the shroud face down and place the fan and space frame assembly within it. Using the provided measurements in the well-written instructions, locate the space frame accordingly and clamp it in place. 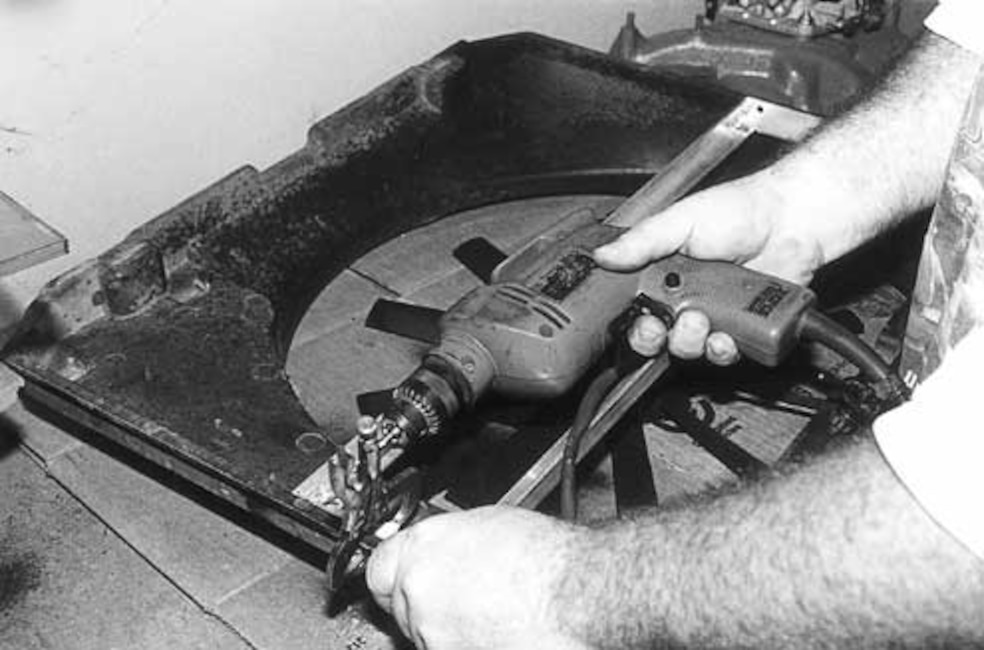 Using a 1/4-inch drill bit, drill holes into the fan shroud to match the holes already in the space frame. 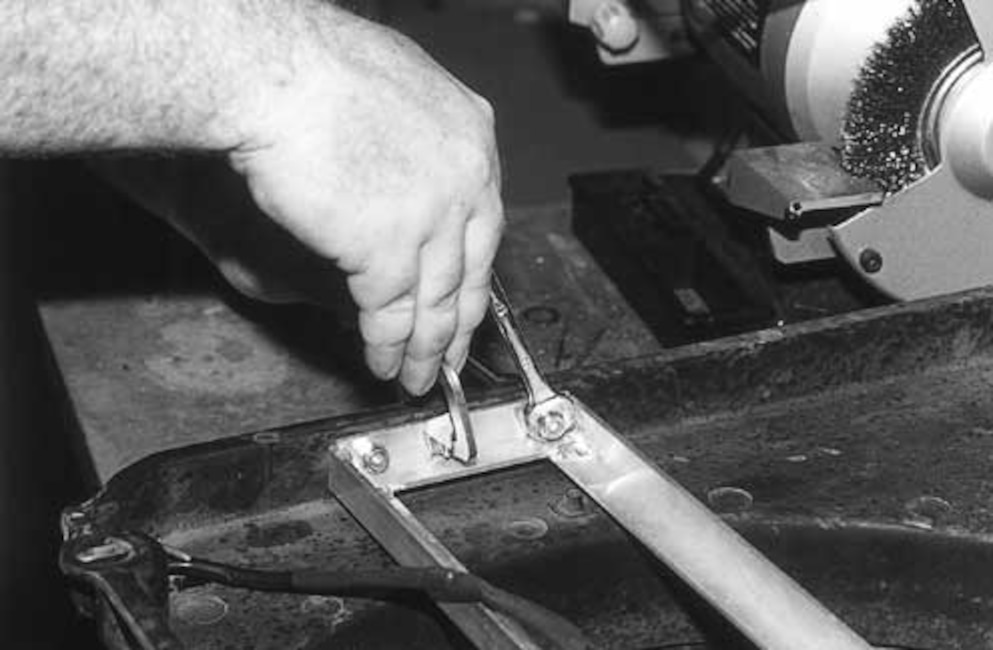 Starting on the driver side, install the included hardware with the nylon locknuts on the inside of the fan shroud. Do not remove the clamp until the bolts have secured the space frame to the shroud. 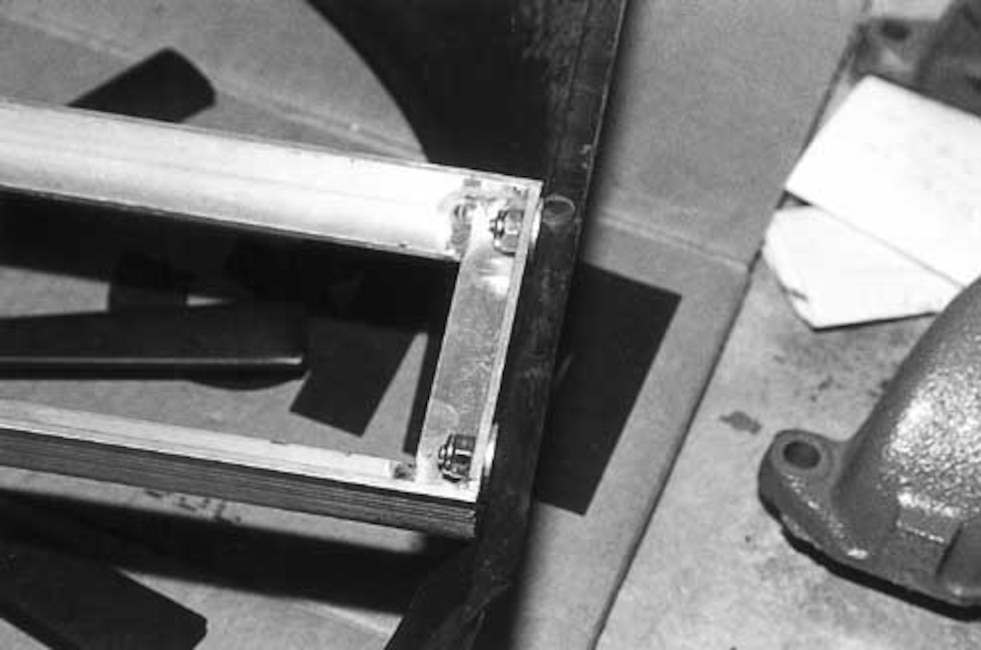 When you repeat the procedure for the passenger side of the space frame, you will need to place the included washers as shown to take up for the curved inner wall of the shroud. 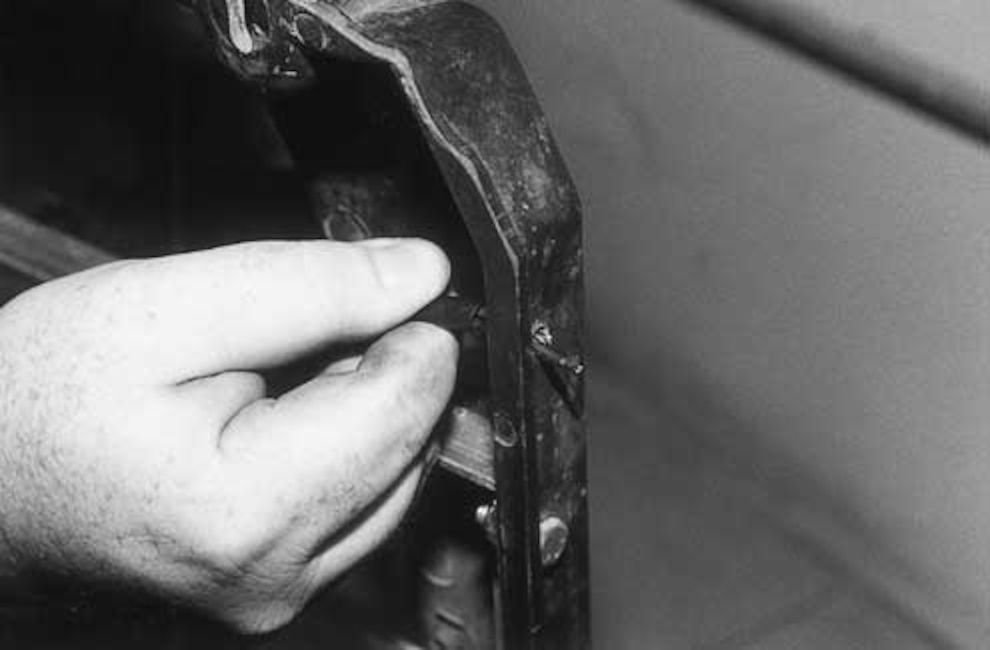 For the final shroud modification, make a small hole for the two motor wires to pass through. We opted to make our hole on the driver side at the top. Make sure the hole will clear any obstacles (coolant reservoir, sheetmetal, and so on). 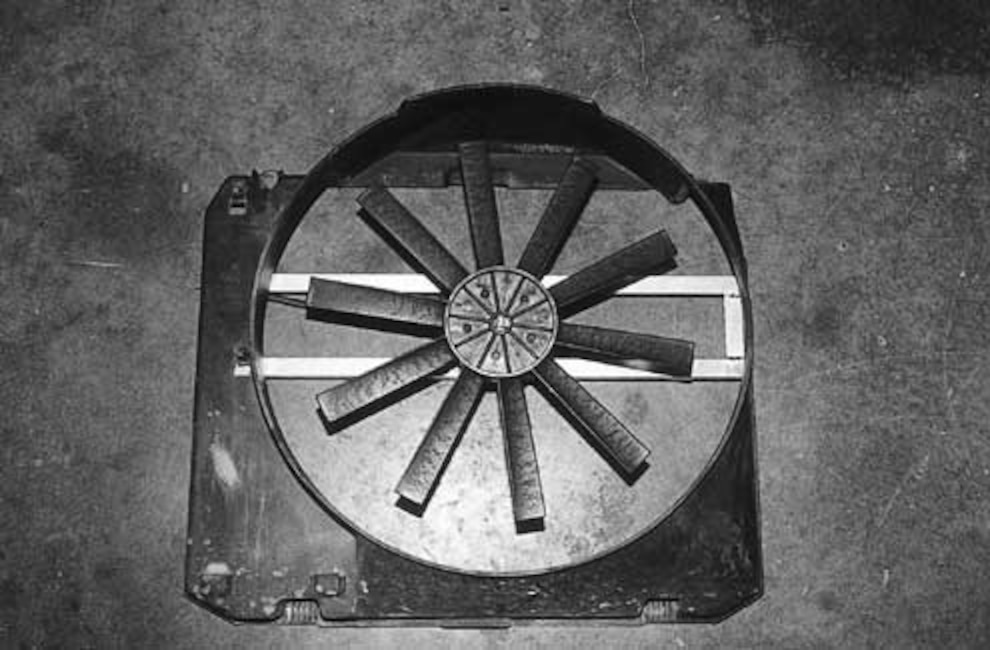 The installation of the fan into the shroud should look like this. Real clean-looking, isn’t it? 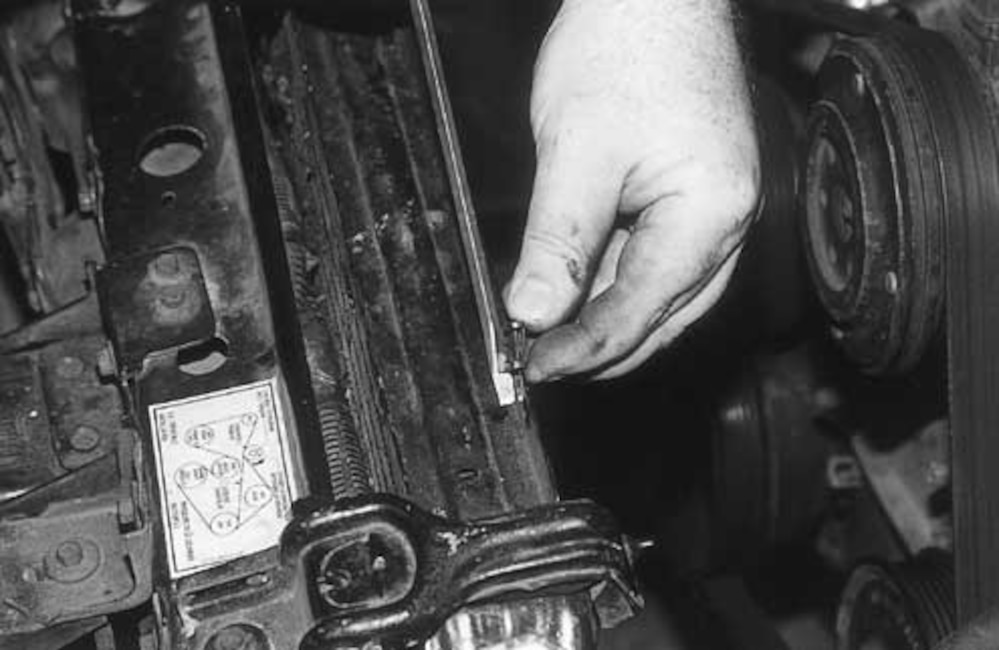 Due to the added weight of the fan, the shroud mounting hardware has to be replaced with stouter pieces. Remove the original nut clips by carefully prying them up with a flat-blade screwdriver until they are free of the radiator core edge. 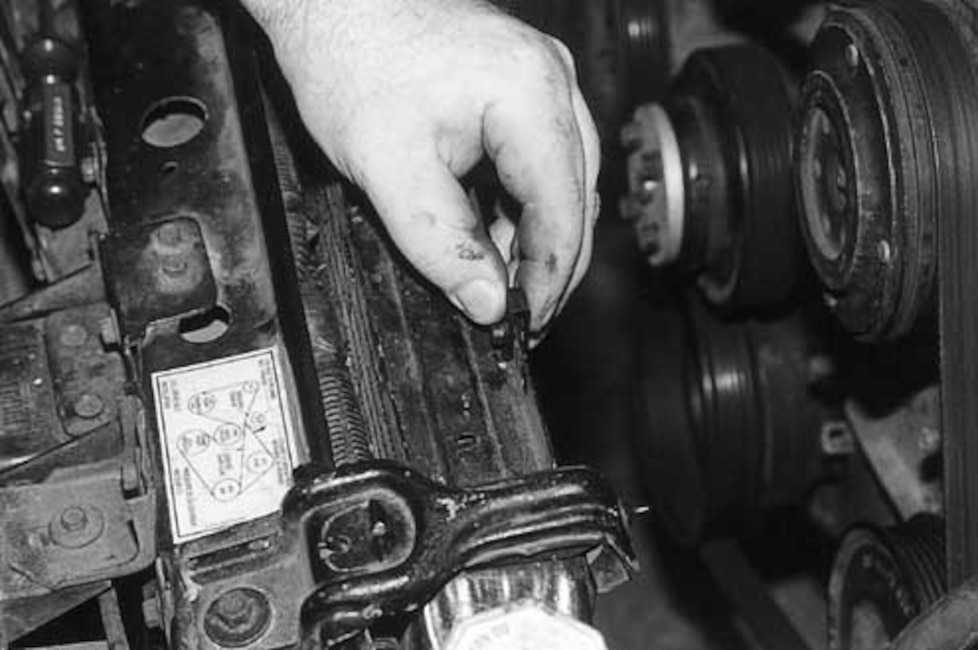 The new mounting clips take the place of the old ones. Vertically center them in the radiator slot openings to allow the mounting bolts to thread with ease. 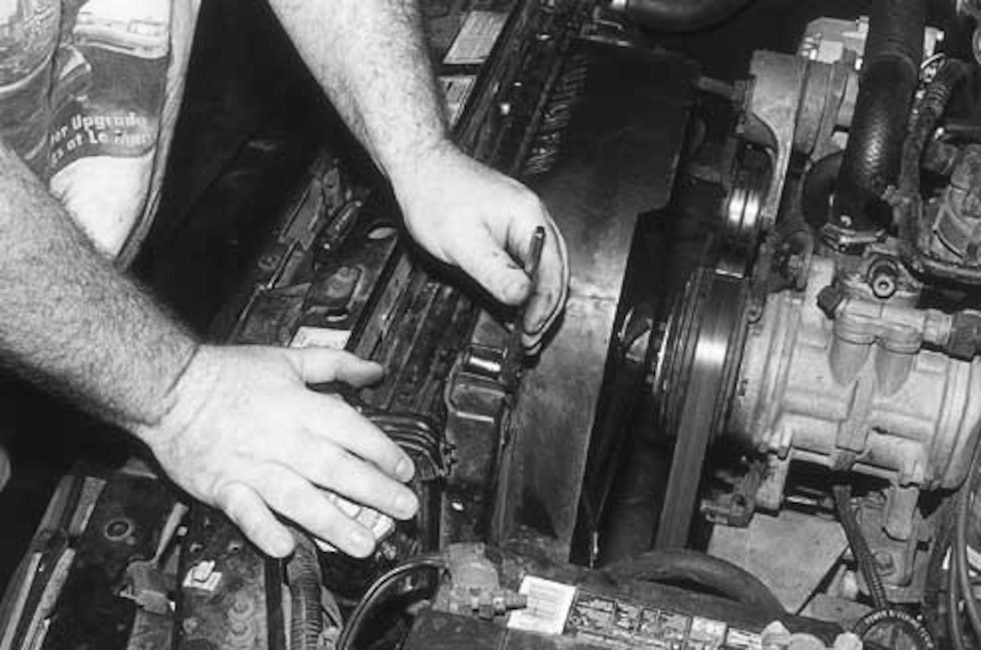 Put the radiator fan shroud and electric fan assembly back into place, making sure that the lower retaining clips on the radiator are indeed securely holding the shroud. Then secure the top of the shroud with the new hardware that matches the mounting clips installed in the previous step. 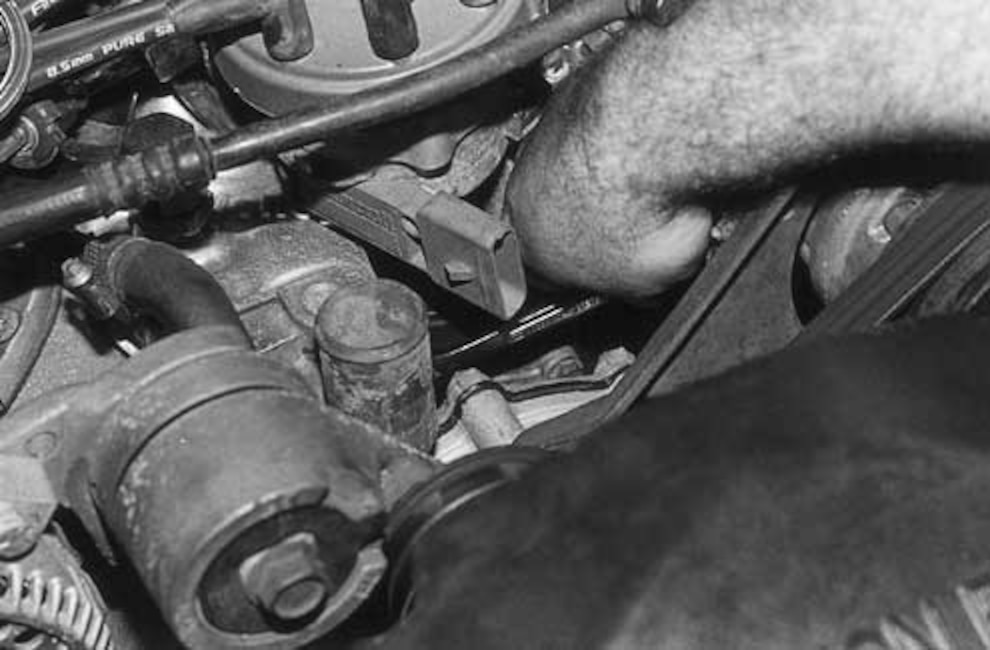 Mounting the temperature switch requires drilling a hole in the top of the thermostat housing (unless your housing has a pipe plug already installed, in which case you simply install the sensor in place of the plug). While it is possible to do so on the car, we opted to remove the housing. Partially drain the cooling system and remove the two 1/2-inch mounting bolts. Unplug the TFI module on the distributor and use a short open-end wrench to access the lower bolt. 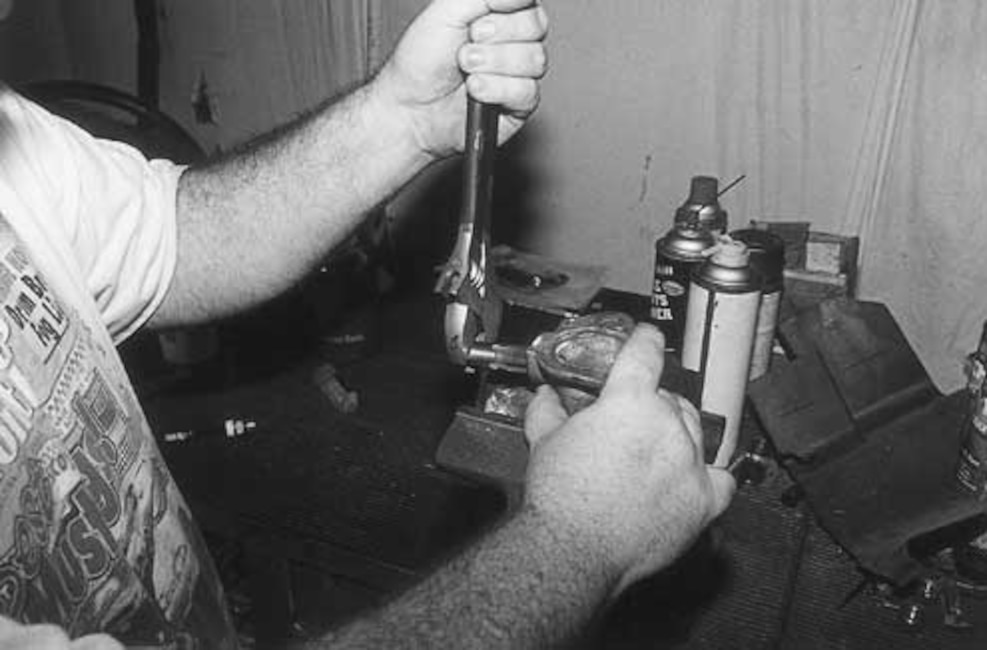 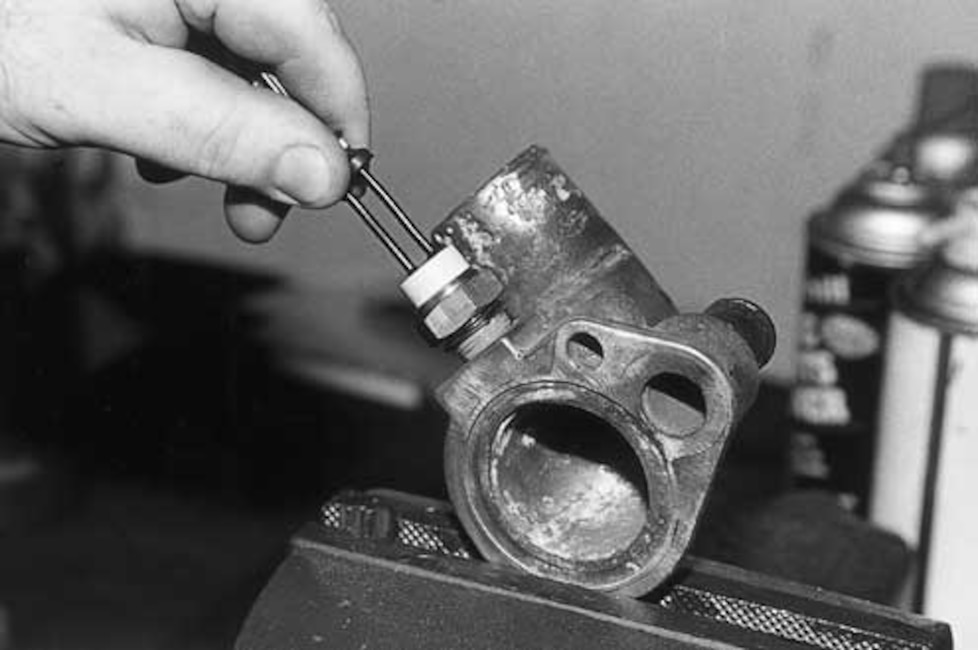 As stated in the instructions, apply a light coating of silicone sealer to the threads, then install the sensor into the thermostat housing. 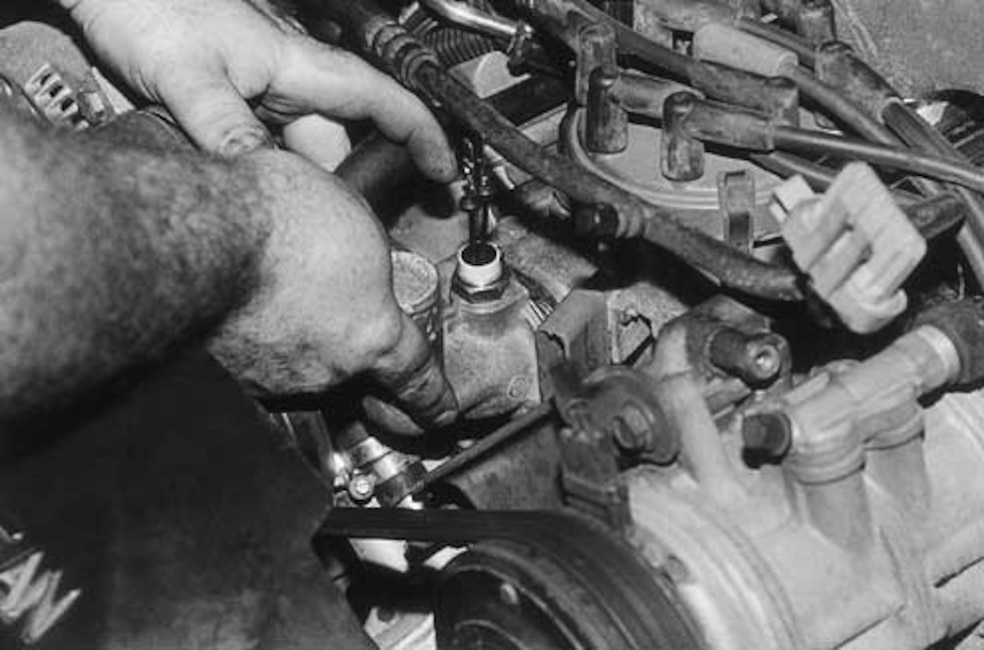 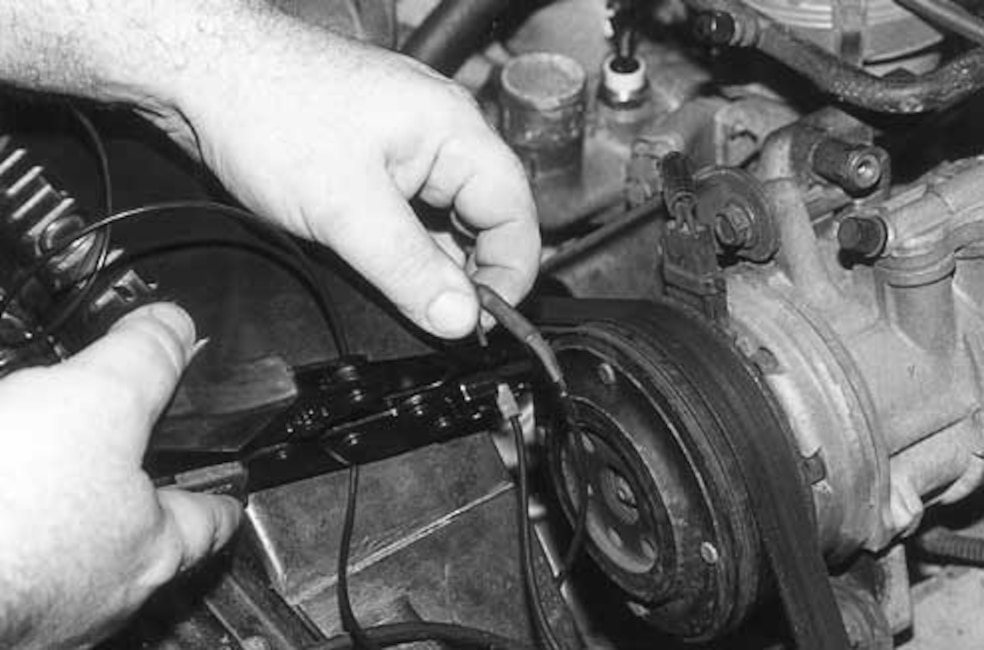 Now that the fan and the sensor are installed, all that’s left is the fan circuit wiring. Following the wiring diagram included in the kit, cut two lengths of wire, crimp them to the fan wiring, and apply shrink-wrap over them. Soldering the wiring is a wise alternative if you have the correct tools. 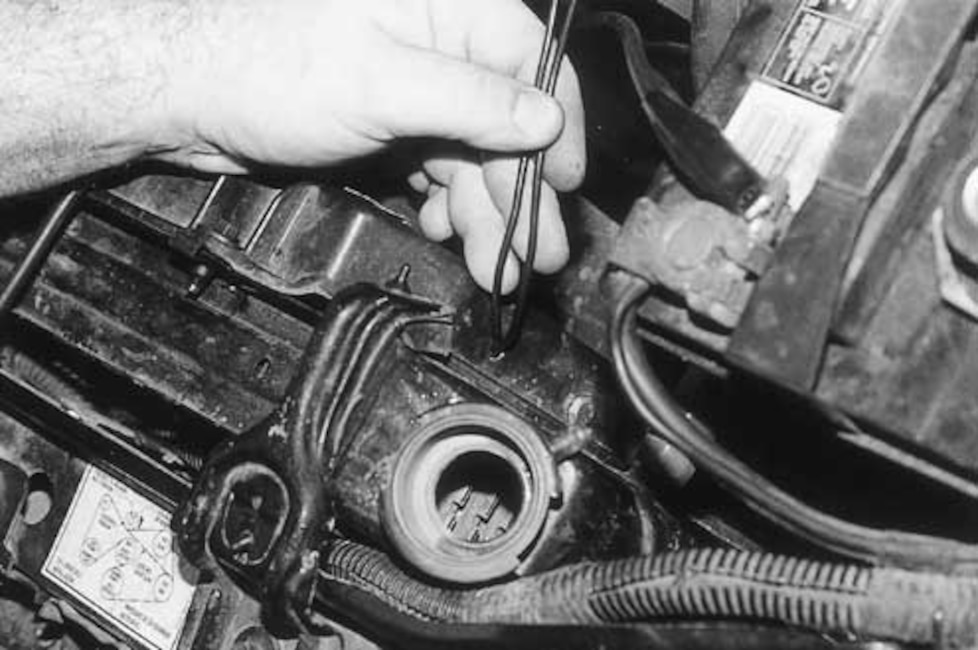 The two lengths of wire are routed through the hole we drilled earlier in the side of the fan shroud. Make sure the wiring is secure and away from the fan blades inside the shroud. Identify the wiring to avoid reversing the polarity when connecting the wires to the relays later. 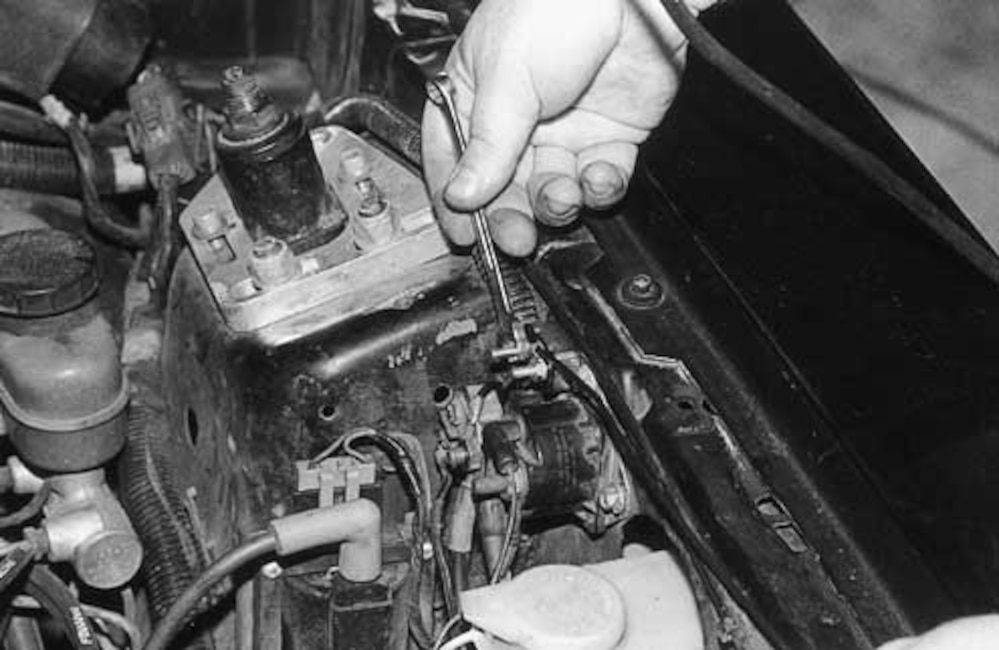 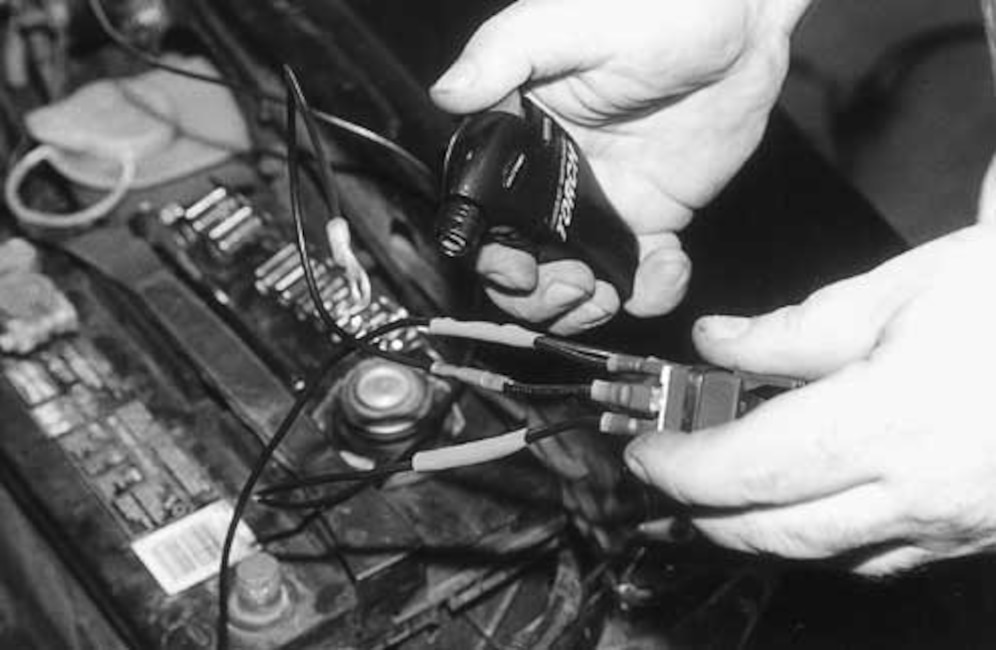 Route the circuit breaker and the fan wiring to the location you wish to mount the relays to, then cut the wires to the proper length. Instead of using the supplied relay harness, we directly connect the wires to the relays with female spade terminals (supplied) for a more compact installation. Securely crimp all connections (or solder), then apply shrink-wrap. 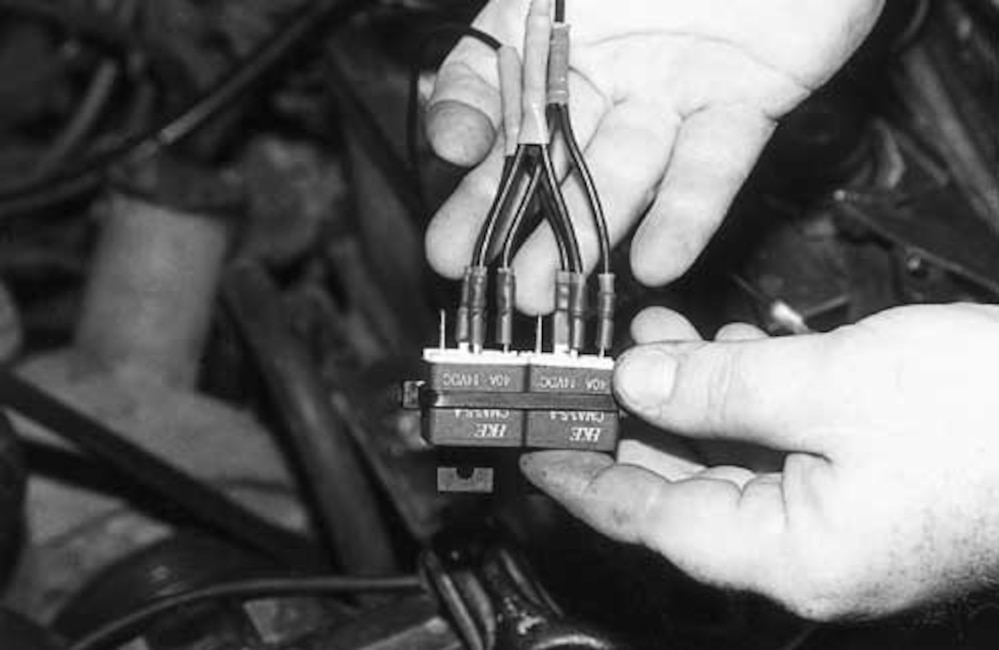 Here is a close-up of the relays and their complete wiring. Connecting the temperature sensor to a 12-volt–switched circuit (under the dash) and connecting the A/C relay to the A/C clutch circuit are all that’s left to do. The illustration and the instructions guide the way. 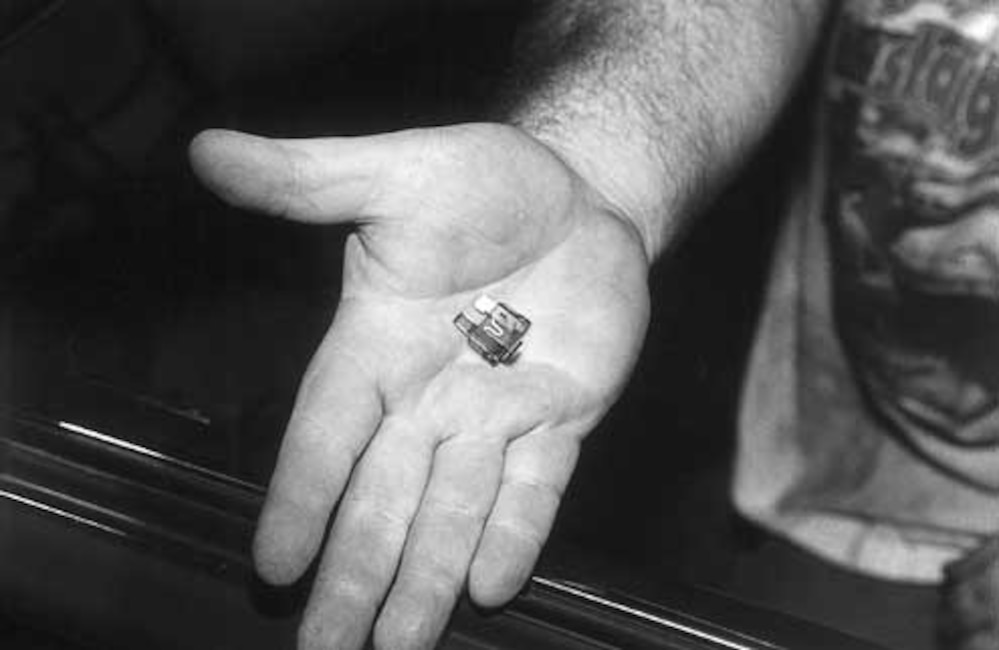 Using a test light, you can locate a circuit at the fuse box that is powered only when the ignition key is in the “on” position. Using a blade-style fuse tap (not included), shown installed on the fuse here, is the best way to make the connection. 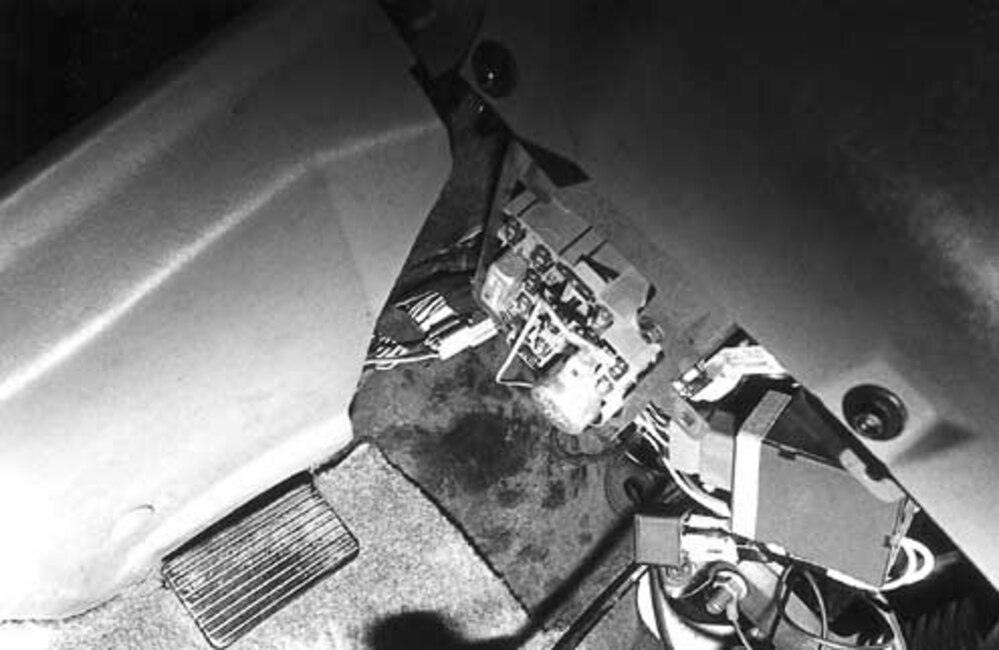 Route the temperature sensor wire through the firewall (we used an existing wire route through the rubber boot behind the master cylinder), and install the wire onto the fuse tap by using a female spade connector (arrow). When you route the wiring, make sure they don’t interfere with any pedal linkage. 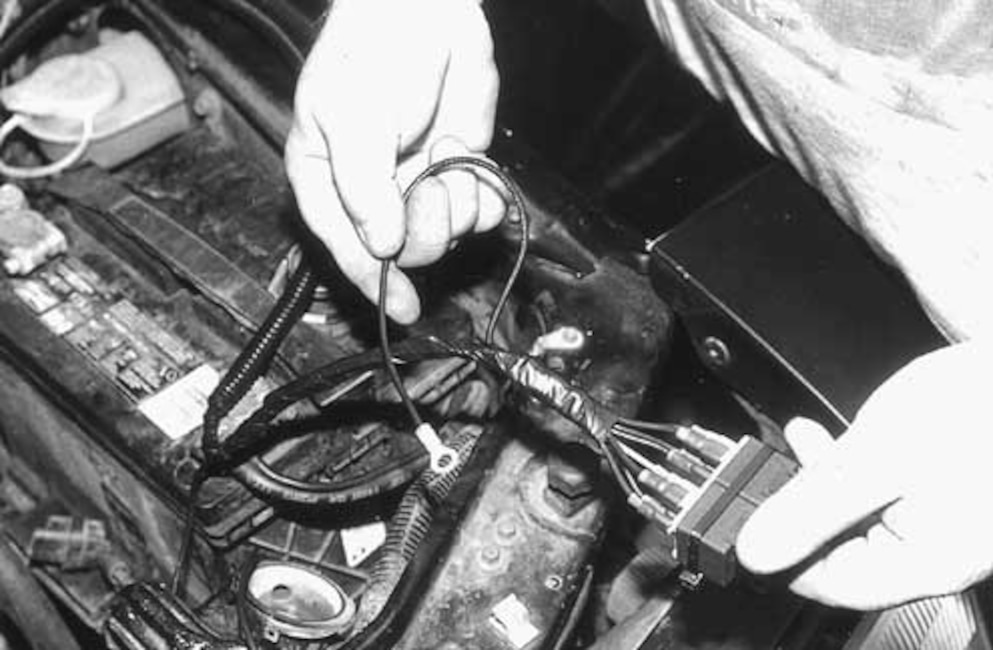 Once all wiring has been completed, the harness can be neatly made up and protected with the provided wire loom covering and electrical tape. 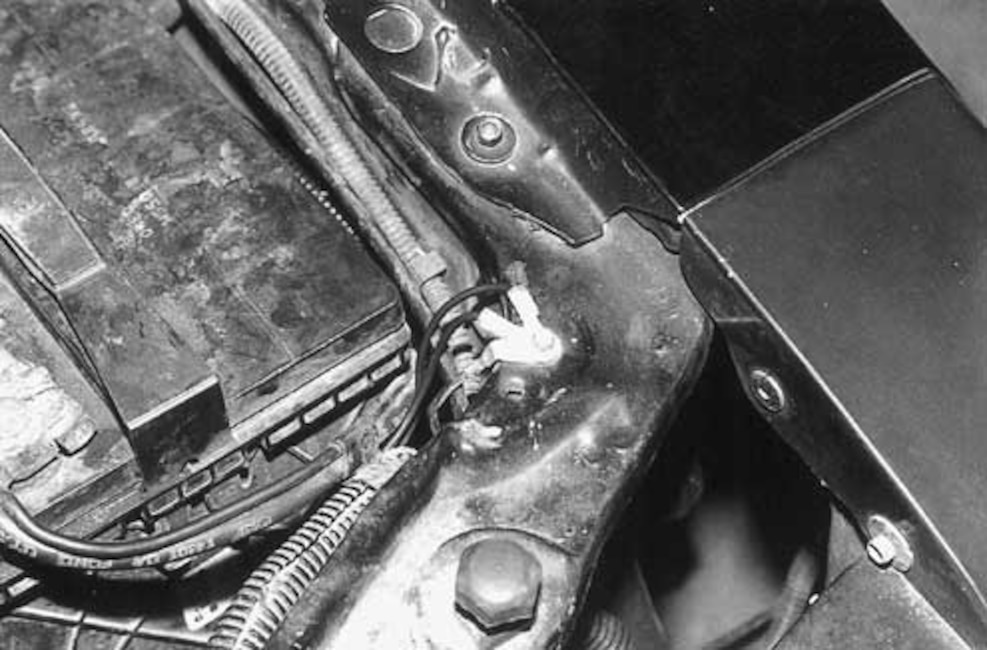 The relay ground and the fan motor ground can be made anywhere there is a clean, solid body ground. Since our relays are mounted behind the driver-side headlight area, we use the headlight ground found in the corner of the core support for the two grounds we need. 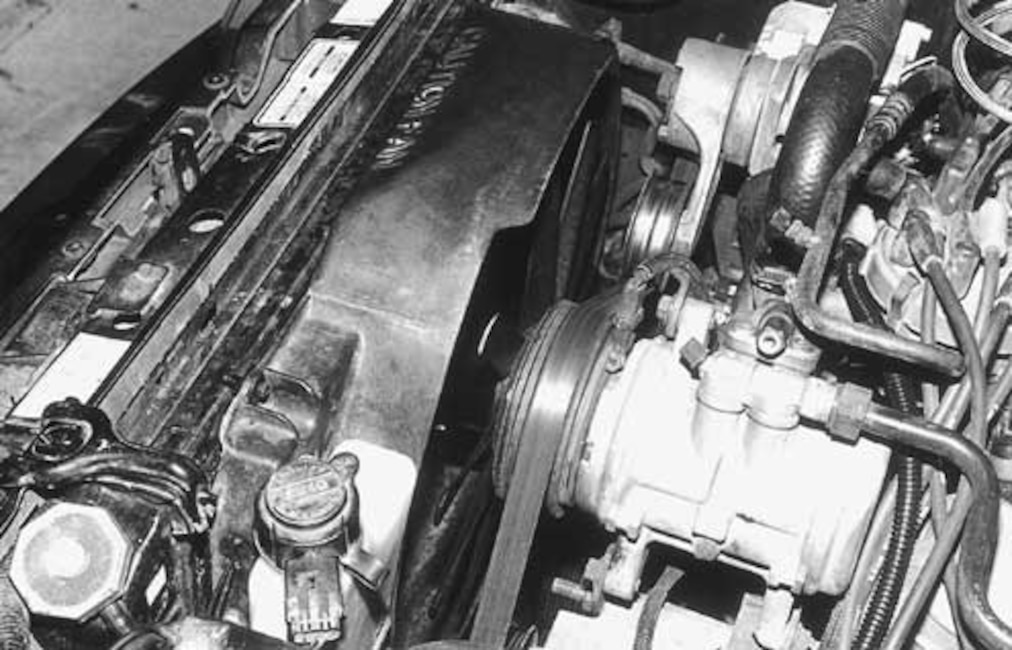 The completed CoolPower Supercool electric fan is now keeping our modified 5.0 cool. At first glance, the engine compartment looks stock to the untrained eye. What more could you want?

Late-model 5.0 Mustangs were designed to run relatively hot with a factory-installed 193-degree thermostat. Running these engines at higher temperatures, combined with emissions devices and a somewhat lean fuel curve, allowed them to pass emissions. At least this is what the Ford engineers envisioned. But when a Mustang owner takes the engine’s performance outside of Ford’s parameters with high-performance parts, such as heads, camshafts, and intakes, the 193-degree thermostat usually gets the boot for a 180- or 160-degree unit. While this will help occasionally, other forms of extra cooling are needed. Larger core radiators, synthetic cooling mediums, and other fixes are commonly found under the hood of a hopped-up late-model.

The factory clutch fan is one component many owners don’t think about much. This fan was designed for stock usage as well and will not handle a performance-built engine that has a need for extra cooling. Replacing the stock clutch fan with an electric fan is one of the more popular ways to increase your cooling benefits.

Several types of electric fans are on the market, from low-buck to outright dangerous, but we like the CoolPower-series fans offered by Interactive Systems & Technologies. These well-thought-out fan systems utilize the factory fan shroud as the mounting device for a near stock look with no bulky brackets or other obstructions. The kits come with all required parts, wiring, and connectors and can be installed in a few hours. There are two CoolPower kits to choose from. The standard kit is designed to flow 2,200 cfm of air and comes with a 195-degree temperature switch (the 160- and 180-degree switches are optional). The Supercool fan kit is identical to the standard kit, except that it flows 2,800 cfm and requires a 130-ampere alternator conversion. Since our ’93 sedan was wearing a Holley SysteMax II combination as well as exhaust enhancements and a Nitrous Works nitrous kit, we opted for the Supercool model.

Our ’93 already had been converted to a 130-ampere alternator, courtesy of a Performance Distributors [(901) 396-5782] conversion kit, so we were ready to go for the higher output of the Supercool fan.