How To Improve Six-Cylinder Performance

Make The Most Of Your Inline Mustang's Potential 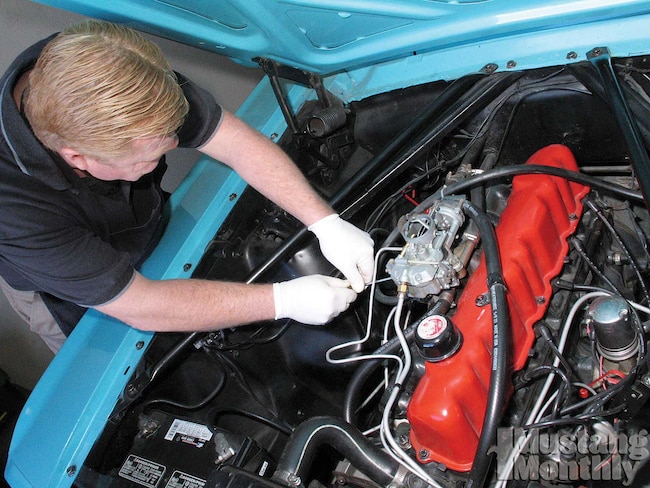 Ford's lightweight six-cylinder engine debuted in the '60 Falcon and Mercury Comet as the 144ci six. It's strong on reliability but not much on power. A year later, Ford upsized the 144 to 170 ci with an increase in stroke, which improved power but didn't rock the planet. When the Mustang was introduced in April 1964, it got the Falcon's improved seven main bearing 170ci six as standard equipment. Producing 105 horsepower at 4,400 rpm, this engine's message was never about power but more about economy for buyers who needed a fuel stingy, reliable powerplant.

Detroit has come a long way over the past nearly 50 years, so it's easy to get spoiled by technology and comfort. Improvements like electronic fuel injection, roller camshafts, overdrive transmissions, and four-wheel disc brakes have made automobiles more fun to drive. Driving an old six-cylinder Mustang is more about the spirit of driving a classic than it is about comfort. These cars put you more in touch with the road than today's technological wonders. And face it, there's only so much you're going to be able to do with the classic inline sixes, including the later 200ci version. However, you can make the most of these engines if you know what to do.

The largest culprit with vintage Ford sixes is fuel distribution. Their integral log-style intake manifold, which was conceived to control manufacturing costs, makes these sixes frustrating to live with. They suffer from rough idle quality no matter how many different carburetors you try. They stumble off idle and surge or hesitate while cruising. We tend to blame these performance issues on the carburetor, but that isn't always the case. Poor fuel/air distribution along the integral intake manifold and into the cylinder head creates all kinds of performance issues. It can be the luck of the draw because no two castings are alike. Some sixes run like a clock while others can't get out of their own way.

Turbulence along the log manifold tends to upset fuel droplets in suspension, which enter intake ports erratically. End cylinders tend to run lean while inboards run rich. To add insult to injury, Ford placed the one-barrel carburetor above a hot exhaust manifold, which causes all kinds of heat-induced problems (percolation and vapor lock) in hot weather.

Autolite 1100 Carburetor
The Autolite 1100 one-barrel carburetor installed on classic six-cylinder Mustangs suffers from engineering shortcomings, with rough idle and hesitation among the biggest complaints. Jon Enyeart of Pony Carburetors tells us that these shortcomings can be engineered out with a professional rebuild and restoration. When Pony Carburetors rebuilds the 1100, it rolls in improvements that eliminate hesitation, stalling, and rough idle. However, despite Jon's best efforts, some drivability problems cannot be eliminated because fuel distribution problems transcend the carburetor. You can have the best carburetor in the world, but if air and fuel have trouble getting to the intake ports, drivability will continue to suffer. 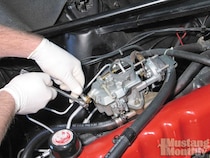 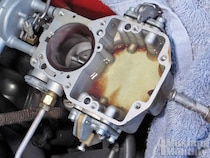 There are some variations in the 1100 you need to know about aside from venturi size. From '63 through '67, the 1100 carburetor (except '66-'67 California emissions) had a spark control valve (which looks like a Holley or Autolite power valve). Its purpose is to switch between intake manifold vacuum (constant) and venturi vacuum (throttle controlled) for the Load-O-Matic distributor, which does not have a mechanical (centrifugal) advance. Instead, the spark control valve applies throttled vacuum to the vacuum advance as the accelerator is pressed and rpm increases.

For '68-'69, as well as California emissions vehicles in '66-'67, the 1100 carburetor took on significant changes, including a 1.10-inch venturi in all 170 and 200ci applications. The spark control valve went away because there was a new Autolite single-point distributor with both mechanical and vacuum advance.

The 1100's automatic choke system is identical to what we find on the 2100 and 4100 V-8 carburetors with a choke heat coil and hot air manifold heat system. Hot exhaust manifold heat is drawn to the thermostatic coil, which expands with heat and pulls the choke off. A choke unloader speeds up the pull-off process to both reduce emissions and save fuel. If the automatic choke is set too lean, you will experience hesitation and stalling. The key is to adjust the automatic choke for just the right amount of choke and pull-off.

If an 1100 is adjusted properly, all you need is a 3/4 step on the accelerator pedal prior to start-up. This puts raw fuel in the carburetor throat and activates the automatic choke if the engine is cold. If it is at operating temperature and the choke is open, the raw fuel shot will aid starting. There is no need to goose the throttle on start-up. Step on the gas once prior to start-up and the engine should fire right up if everything is in proper working order.

Ignition problems are easier to understand and solve than fuel system woes. Rule of thumb is to never trust new parts right out of the box; just because an ignition wire set is new doesn't mean it's going to function properly. The same can be said for distributor caps and ignition kits. In fact, most ignition kits are manufactured offshore these days and not the same caliber they used to be. If you must use points and condenser, opt for a Motorcraft tune-up kit because they're still manufactured to the same high standards you expect from Ford. We're talking phenolic rubbing blocks and vented contact points, not the cheesy nylon stuff you find at discount stores. Spend the money to buy the best.

MCE Engines in Los Angeles has a strict regiment when it comes to the finite details of engine tuning. Marvin McAfee shows us time and again why you must never trust anything right out of the box. Marvin checks quality (material condition) and continuity (resistance or an open circuit) of every ignition part he installs. Ignition wires sometimes have breaks you cannot see. New spark plugs sometimes suffer from zero continuity (no spark) and must be discarded. And sometimes, it's as simple as a bad ground between engine and chassis, which creates all kinds of electrical gremlins.

When engines develop a misfire, it's easy to assume the worst. Instead, Marvin suggests going after the simplest things first. Most of the time, misfire comes from faulty ignition components. Marvin stresses the use of genuine Motorcraft or Autolite spark plugs and ignition components, advice that comes from experience with a wide variety of ignition parts.

Three For Six
When the compact Ford sixes were introduced 50 years ago, aftermarket companies like Offenhauser got on board with performance products designed to improve performance. The three one-barrel carburetor setup was one approach using Holley or Autolite carburetors. Those classic Holley 1904, 1908, and 1909 one-barrel carburetors look sharp and perform well when you can find them. Pony Carburetors is the first stop in your search because they have a huge inventory of cores and access to a vast network of sources if it isn't in stock.

The Offenhauser 3/1 induction system doesn't necessarily deliver trailblazing performance. It does improve fuel/air distribution, placing two carburetors toward each end of the log-style intake manifold to improve drivability while offering crisp response and a steady application of torque under acceleration.

Summit Racing Equipment has the classic Offenhauser induction system for vintage Ford sixes, part number OFY-5205, which includes the three one-barrel manifold, attachment hardware, gaskets, and progressive linkage. It does not include the carburetors, which can be sourced from Pony Carburetors or Mustangs Etc.

Cooling System
We don't hear much about overheating with six-cylinder Mustangs because they had adequate cooling systems from the factory, unlike their V-8 counterparts. Still, if factory cooling is adequate, you can do even better with a three or four-row core radiator, high-flow water pump, and proper cooling fan configuration.

When you're planning your Mustang six's cooling system, plan for extreme conditions at each end of the heat spectrum. Although some opt for a 160-degree thermostat, we recommend a 180-degree thermostat because you want your six to operate warmer rather than cooler. Cold engines aren't as efficient for one thing. For another, lubrication doesn't perform as well in a cold engine. Replace your Mustang's thermostat every two years, which is when cooling system service (flush, fresh antifreeze) is suggested. Replace hoses every four years, and always use an anti-collapse spring in the lower hose.

Duraspark For Reliability
In the mid-1970s, Ford introduced Duraspark ignition on all new cars and trucks. Consisting of electronic distributor, high-output ignition coil, and a control module, Duraspark is easy to install and live with. Classic Inlines offers Duraspark ignition from Performance Distributors for six-cylinder enthusiasts. The cool thing about Duraspark is parts availability everywhere. If Duraspark fails, help is as near as the closest auto parts store.

Keep in mind the Duraspark distributor is only for Autolite 1100 carburetors without spark control. Vacuum for the spark advance comes from throttled carburetor vacuum only, never straight off the intake manifold. Manifold vacuum is constant; throttled vacuum happens only when you step on the accelerator.

Duraspark gets its power from non-resistance power right off the ignition switch-a full 12-14 volts-not from resistor wire (pink) that steps power down to nine volts. You can mount the control module just about anywhere, including under the dash if you prefer a stealthy approach. Painless Performance Products offers a Duraspark conversion kit that makes installation a snap.