How To Restore Exhaust Manifolds 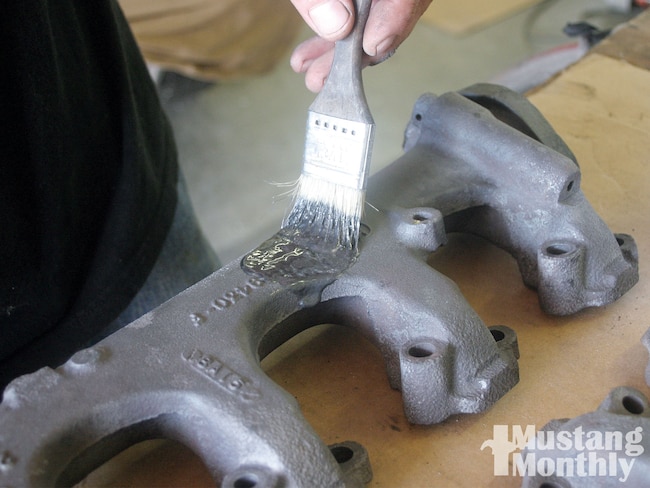 We've all seen them at the shows or cruises-a fresh engine, sparkling in Ford Corporate Blue with every clip, hose, and wire perfectly detailed and positioned. Even the engine compartment is spotless. But the view is ruined by the sight of corroded, rust-color exhaust manifolds. Perhaps this isn't such a big deal on big-blocks where the manifolds are tucked mostly out of sight under the heads. But if you're admiring a small-block or a six-cylinder, the exhaust manifolds are right out there in perfect view.

The good news is that exhaust manifold restoration is quick and easy-once you get them off the engine, of course. From there, it's a matter of cleaning the cast-iron by sand- or bead-blasting, then coating the manifolds with Factory Gray High Temp Coating from The Eastwood Company. Designed to withstand temperatures of up to 1,200 degrees, this coating will have no problem protecting our Mustang manifolds, which will likely never see temps over 900 degrees. It's easy to brush on with nothing more than a regular paint brush.

Merv Rego and Matt Simmons at Classic Creations of Central Florida tackled the restoration of our small-block Ford exhaust manifolds, which were already off the 289 during an engine rebuild. Even with extra time needed to remove a pair of stripped and corroded studs, the entire process took less than three hours.

Looking foundry-fresh, our manifolds are now ready to bolt-on to our 289 when it returns from the engine shop. 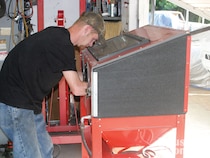 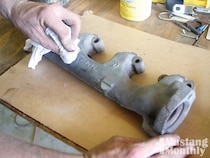 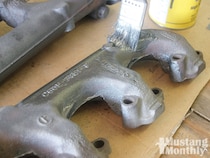 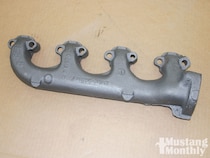 Stud Removal
While the actual manifolds on our '66 Mustang were in good shape, we can't say the same about the studs on the passenger-side manifold. Only a handful of threads were still usable on each stud, so we needed to remove them before restoring the manifolds. New studs will be installed later.

Merv Rego says there are two ways to remove rusty studs from exhaust manifolds. By heating the studs and the area around them, you can often break the studs loose with Vise-Grip pliers or a pipe wrench. This worked perfectly on one of our studs. The other one snapped off, forcing Merv to switch to Plan B-drilling out the broken-off stud. This requires some careful surgery to prevent damaging the interior threads, but by starting with a small drill bit and working up in size, you can remove most of the stud material before cleaning out the threads with a tap.