How To Install Performance Mufflers on a 2005-2009 Mustang GT

We like the deep, throaty demeanor of aftermarket high-performance mufflers on new Mustangs. The downside is that they're typically hard on our hearing, especially at highway speeds or at wide-open throttle.

Concerned about cabin noise levels, Corsa Performance Exhausts has found a way to lasso that awful drone (or reflective sound) and get it under control so you get that throaty roar out back without the dreadful harmonics inside the car. Corsa calls it Reflective Sound Cancellation, which uses aeronautical and space-age noise suppression technology.

With Corsa's RSC, exhaust sound waves are deflected inside the muffler without restriction and without fancy electronics. RSC incorporates a full 360-degree air gap within the muffler that allows sound pressure waves to escape, then be returned 180 degrees out of phase, which cancels specific sound frequencies. What comes out the tailpipe is crisp, clear V-8 sound and performance. RSC drowns the drone with the light and airy sound of a Mustang rocket ship.

We continue to be amazed at how easy it is to work on and modify '05-'09 Mustangs. These cars were designed in a spirit of cooperation between Ford and the aftermarket. 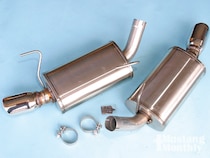 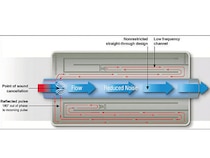 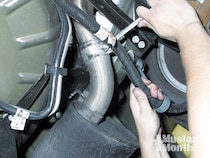