Miles Cook
January 2, 2007
BBK's new headers for '05-'07 Mustang GTs come with all the usual related installation hardware such as bolts, collector studs, flat washers, lock washers, and nuts. New gaskets are also provided. Part number 1612 is the standard finish, while 16120 is a ceramic-coated finish. Installing headers on the current Mustang is considerably easier than the previous-generation SN-95 car due to the overall larger size of the S197 platform. There's simply more room to work. While it still takes a while to do the job (about 4-6 hours), the added workspace is a welcome change.

Now that we're well into the third year of production for the S197 Mustang, the aftermarket and legions of owners have had plenty of time to figure out that these cars respond quite well to bolt-on upgrades. Better, in fact, than probably any previous Mustang generation.

Not one to be left behind in the evolution of 4.6 Mustang development, BBK Performance Parts has been right there every step of the way. This is evident by the impressive results we achieved last year when installing a few BBK bolt-on bits on an '05 GT.

In a nutshell, BBK's throttle body, cold-air kit, and underdrive pulleys netted a 30hp gain over the car's baseline, and keep in mind that this was at the rear wheels, not at the flywheel. At the flywheel, call it nearly 50 hp. Not bad for a few hours work and about $1,000 in parts and installation labor-even less if you do the installation work yourself.

This time we're turning our attention to the exhaust side of engine breathing by installing BBK's new shorty headers for the three-valve, 4.6-powered Mustang GT. The results are a worthwhile step on the path to more bolt-on power.

Note that we only installed and tested the headers themselves. This includes the '06 GT test car's stock mufflers and H-pipe. Combine the headers with BBK's soon-to-be-released crossover pipe and the other above-mentioned items, and more than 300 hp at the wheels will easily be the result. It's a setup we look forward to doing, and we intend to pass on the results when a BBK test car is complete. 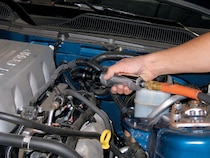 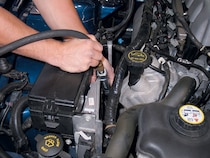 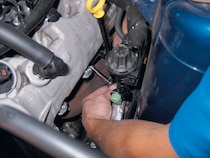 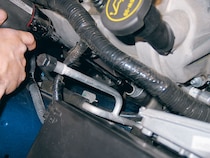 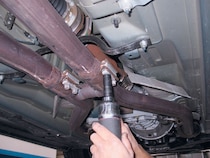 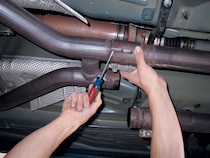 On the Dyno
If you only look at the peak horsepower gain, shown in bold numbers, then sure, the headers only gained 4 hp at the wheels. But you'd be missing the large majority of what the headers really did for our '06 Mustang GT test car.

Study the dyno charts to discern the real benefits of the BBK headers: improvements in torque output. For example, look at the results at 3,000 rpm. The car in the baseline test made 265.6 lb-ft. With the headers, the figure jumped to 283.2, an improvement of 17.6 lb-ft.

Torque is what you feel on the street, and having more of it in the midrange is what's important for slipping through traffic and getting up freeway on-ramps. At various speeds, power output isn't too bad either. Again looking at 3,000 rpm, the baseline test result is 151.7 hp. With the headers in place, output jumped to 161.8 hp for a gain of more than 10 hp.

Additionally, recall that we're only testing the headers here. With BBK's crossover pipe in place, figure another 10 hp or so improvement across the board or well over 300 hp at the wheels on this car already equipped with a BBK throttle body and cold-air kit. Note too that the power and torque peaks with the headers were at slightly lower engine speeds, which makes the power all the more usable on the street. Furthermore, with the headers, the torque curve stayed over 300 lb-ft from 3,750 all the way to 5,000 rpm, another notable improvement over the baseline test.