In This Final Segment Of Our Six-Cylinder To V-8 Conversion, Our '67 Mustang Gets Its 289 Drivetrain

In the past two issues of Mustang Monthly, we've shown how to swap V-8 power into a vintage six-cylinder Mustang. In the Feb. issue, we began by building a dependable 280-horse 289 small-block from Trans Am Racing. Last month, we prepared the chassis for V-8 power with new Grab-A-Track suspension components and Stainless Steel front disc brakes from Mustangs Plus.

This month, we're wrapping up our six-to-eight swap with the heart of the matter: the drivetrain, which includes the 289, a Tremec T5 five-speed transmission, and an 8-inch, 3.55:1 limited-slip rearend from Randy's Ring & Pinion. The result is a classic Mustang that's fun to drive every day.

Converting a six-cylinder Mustang to a V-8 should never be thought of as only an engine swap. You have to think of it as a complete package that's going to be safe and reliable with upgraded chassis components, better brakes, and a driveline that can withstand the increase in power. With our Grab-A-Track suspension and Stainless Steel front disc brakes installed in Carolyn Chenore's '67 T-code hardtop, we're going to remove the worn-out 200ci six, 3.03 three-speed manual transmission, and 731/44-inch integral carrier rear axle in order to make way for the more powerful V-8 driveline. 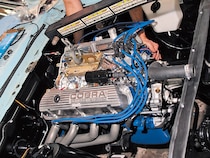 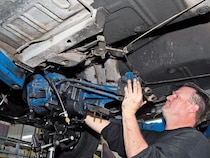 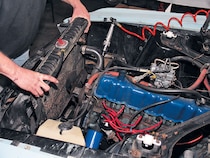 The Right Induction
When we embarked upon this swap, we faced a lot of choices. For example, we considered two induction systems: Holley/Weiand and Edelbrock/Mustangs Plus. Holley provided us with a Weiand Action Plus intake manifold with a 600-cfm four-barrel carburetor. Mustangs Plus set us up with a polished Edelbrock Performer 289. When our project manager, John Da Luz of JMC Motorsports, examined the choices, he had to consider the engine and how it would be driven. John stressed that bigger isn't always better, especially for street applications that rely on a small-block Ford for the commute or weekend cruising. Crisp off-idle response is what we want.

If you're going to spin your small-block high or huff a lot of displacement with a 331 or 347, the Edelbrock Performer RPM is a better choice. The Performer RPM, as well as Weiand's Stealth, is a dual-plane manifold more bent on high rpm use. These manifolds perform well in daily driving, and when you pin the butterflies, they deliver greater sums of torque at high revs.

Because Trans Am Racing built the 289 with a mild flat-tappet Isky camshaft on the order of 250-280 hp, John knew we needed to keep manifold and carburetor selection modest. The Edelbrock Performer 289 and Weiand Action Plus manifolds serve basically the same purpose: terrific low-end torque for street use. Both manifolds begin making torque around 1,500 rpm. The tie-breaker was port and plenum size.

In this case, we went for less instead of more in terms of manifold and carburetor size. The Edelbrock Performer 289, with its slightly smaller plenum and intake ports, made it more appropriate for our mild street 289, but there's nothing wrong with Weiand's Action Plus. It's also an outstanding manifold for cruising and freeway acceleration. We just needed something a pinch smaller, which is exactly what we found in the Performer 289 low-riser.

Although we opted for a 600-cfm Holley, our 289 would get along fine with a 500-cfm four-barrel carburetor, which would also deliver adequate low-end torque along with acceptable fuel economy for a carbureted V-8.

Light The Mixture
One of the best innovations for classic Mustangs is the PerTronix Ignitor electronic ignition retrofit for Autolite and Motorcraft single- and dual-point distributors. You can install this little guy in 15 minutes and be back on the road in 30. What's more, it virtually never needs maintenance. Install it, set the air gap, and forget it. The PerTronix Ignitor is a perfect fit for daily drivers and weekend cruisers where visual originality is important. PerTronix also offers Ignitor retrofits for vintage high-performance aftermarket distributors like Mallory and Accel.

Single-Wire And High-Torque
If originality isn't important, consider two affordable upgrades designed to save time, money, and frustration. The single-wire alternator has a built-in voltage regulator, increased reliability, and delivers more power. There are several choices when it comes to single-wire alternators. Opt for a polished Tuff-Stuff Delco 100-amp alternator from Mustangs Plus if you'd like to dress to the nines. If you prefer something more conservative, PA-Performance has a 100-amp Nippendenso alternator, which is used in most late-model Fords. These high-output alternators eliminate the external voltage regulator and all of the woes that go along with them.

If you must have the vintage sound of an old Autolite or Motorcraft starter, we suggest a rebuilt unit from Mustangs Etc. or AMK Products. However, if reliability is more important than sound, consider a high-torque-reduction gear starter from PA-Performance. A high-torque starter offers robust twist for even the most temperamental engines and will outlast your old Autolite.

Dressed For Success And Reliability
In the restomod world, enthusiasts embrace personalization. While we endorse it at Mustang Monthly, we also suggest tempering it with a conservative approach. Keep it tasteful with a minimum of chrome and polished doo-dads. No matter how much of a show-off you are, too much chrome can look tacky.

We played around a little with our 289, bolting stuff on to see how it looked, tossing it aside if it didn't fit our decor. As a result, we're using less chrome and more cast-aluminum and color. We opted for a PA-Performance Nippendenso alternator along with an Edelbrock high-flow water pump in rough cast-aluminum. This tones it down while giving us reliability and good looks.

From Flywheel To Differential
V-8 power gives us a blank canvas to work with from the bellhousing back because we can do virtually anything: install a five-speed or automatic overdrive, a classic '60s C4 automatic or Top Loader four-speed, or even a six-speed. Because Carolyn Chenore, who owns this Mustang, likes a manual transmission in her Mustang, she originally wanted to keep a three-speed manual box in the tunnel. When we explained the advantages of having a more fuel-efficient five-speed with overdrive, she liked the idea.

JMC Motorsports answered our call with a used Tremec T5 five-speed left behind by a customer who went with a stronger Tremec TKO transmission. The T5 was fitted with a PRO 5.0 shifter, which tightens up the shift pattern and increases driving pleasure.

We also had the good fortune of working with Southland Clutch, which provided us with a new diaphragm-style clutch to replace the old, knee-eroding, three-finger Borg & Beck clutch behind the six. Diaphragm clutches provide solid engagement without the tremendous disengagement pressures associated with dated three-finger clutches. Another item we're tossing aside is the Mustang's original equalizer-shaft clutch linkage that has always been problematic. These flimsy clutch linkages have rolled over and played dead more times than not, forcing us into the roadside embarrassment of a tow truck. We're going with a hydraulic clutch-conversion kit from JMC Motorsports.

If a hydraulic clutch isn't what you had in mind, Ron Morris Performance has a cable clutch-conversion kit, available from Mustangs Plus, borrowed from the '79-'95 Mustang parts shelf.

Limited Slip
JMC Motorsports provided us with a used 8-inch rearend from a '68 Mustang, perfect for our swap. Used 8-inch cores are becoming harder to find. However, there are many sources. Currie Enterprises can build you a new 8-inch axle housing and differential. If used is more to your liking, check with Mustangs Etc. or Memory Lane Salvage for a rebuildable core.

Randy's Ring & Pinion provided us with a complete 3.55:1 ring-and-pinion rebuild kit, including bearings, seals, gaskets, O-ring, shims, and more. We enlisted the help of Jason Hughes of Hughes Differential Systems in San Diego to freshen up our tired 8-inch chunk. When Jason knocked the differential apart, he found 3.55:1 gears and a peg-leg arrangement that was rebuilt not long ago. He saved the gears for another project and built our differential with a new limited-slip and 3.55:1 gears from Randy's.