Superchips Ford Mustang Install - How To: Tune Your Mustang With A Computer Chip

Superchips Has The Answer To Your Mustang's Performance And Driveability Concerns

Mark Houlahan Tech Editor, Mustang Monthly
September 1, 2000
Photos By: Michael Johnson
Superchips' line of computer chips is available from one end of the Ford car and truck spectrum to the other. Call up the folks at Superchips and see what they can do for your Mustang or Ford vehicle.

We're deep into the computer age, and for the most part, we're better off for it. As I write this, computer magazines are touting 1-GHz CPUs, car stereos can now check your e-mail, and you can buy and sell stocks via your pager. These are just some of the conveniences that today's computer technology have awarded us. We've come quite the distance when you realize that your typical handheld electronic Rolodex has more processing power and memory than the earliest desktop computers.

The computer age has affected our Mustangs in the same manner. Early fuel injection systems were unforgiving and ill-adapted for performance use. Ford was able to make the components smaller, work faster, and cost less. This allowed more advanced processing systems into the Mustang, so the early EEC IV (even in the later years with MAF) was replaced with the more advanced EEC V in '94 V-6 applications, and then in '96 modular V-8 Mustangs. The EEC V computer has more processing power and a broader range of adaptability for performance use.

But no matter what system you have (EEC IV or EEC V), you can still easily surpass the performance window these computers have. When you do, the result is poor driveability, increased emissions, greater fuel consumption, and more. To fix these concerns would require reprogramming the powertrain control module. Unlike the EEC V, the EEC IV PCM is not flash-upgradeable. Unfortunately, only Ford's own SBDS, SBTS, or other device can download the PCM upgrade and flash your PCM at the dealer, and that's only if Ford requires a change (as in a TSB or recall). So what do you do? Your choices are slim. You can invest a large sum of money in a stand-alone engine management system, a laptop computer (if you don't have one now), and spend hours trying to figure out how to tune your combination without hopefully grenading the entire thing on your first full-throttle run. Your second choice would be to have a custom computer chip burned for your specific application to get rid of all your problems and even slightly enhance your performance.

We opted for the latter so we could enjoy the reliability our stock EEC V system offers and, of course, the price differential. We're lucky enough to have the Superchips headquarters only about 90 minutes from us. The company can direct you to its nearest dealer in your area, who will directly tune and burn a chip for you. Mail-order direct applications are also available via an owner-supplied spec sheet. Read on as we get rid of the spark knock, add some fuel, and keep our engine cooler in our Vortech-supercharged V-6 Mustang project car 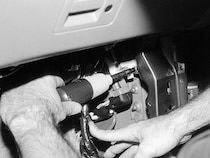 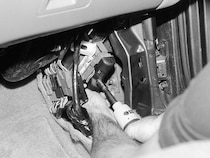 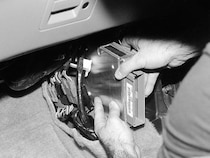 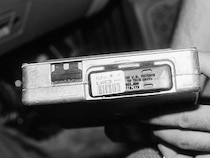 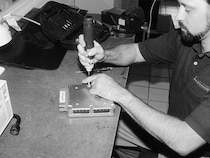 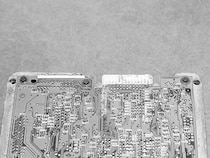 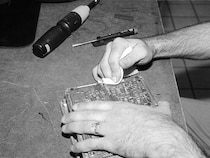 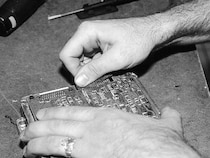 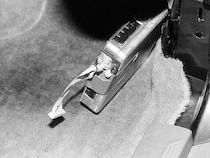