This month, we're in Will and Kelly McLearran's race shop in Tucson, Arizona, to build a 273ci tall-deck Ford inline-six for Mike Winterboer's '69 Mustang SportsRoof.

Because six-cylinder buffs don't enjoy the same wealth of performance parts as those of us with small-blocks, it becomes much like building a V-8 in the old days. If you're building a hot six, you have to improvise-make the most of what you have, beat the bushes for parts, and build durability into your engine in order to keep it together. This isn't done by way of a stroker kit with a steel crank, and it isn't always possible to do it with brute H-beam rods either. 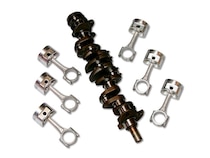 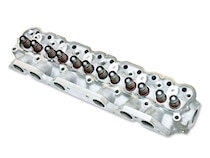 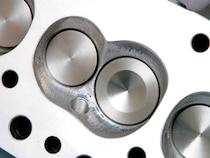 Manufactured in the Dearborn Engine Plant, where Ford also built FE-series big-blocks, the little Ford six was rather anemic at 144 ci and 90 hp. In 1961, Ford increased stroke, bringing displacement to 170 ci and horsepower to 101. In 1964, bore and stroke were increased again to achieve 200 ci.

For 1969, Ford increased block deck height by approximately 2 inches and stroke by 0.784 inch to get 250 ci from the hardy Ford six. Although Ford had fuel economy and improved torque in mind for this engine, it didn't achieve fuel economy. A 302ci small-block V-8 gets better fuel economy than the 250. But if you're read-ing this article seeking performance, you're not concerned with fuel economy.

The 250ci six has features that make it different from the 144/ 170/200. Aside from a taller, wider block, five freeze plugs, and a deeper pan, the 250 also has a four-bolt water pump and a small-block bellhousing bolt pattern. Mustangs and other Ford compacts equipped with the 250ci six have an 8-inch removable carrier differential instead of the smaller 7 1/4-inch integral carrier rearend with four-lug wheels.

Building a six calls for the same attention to detail needed with V-8s. Cylinder blocks should be sonic-checked before any machine work, especially if you're going to boost the mix with a turbocharger or supercharger. 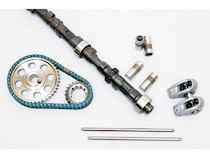 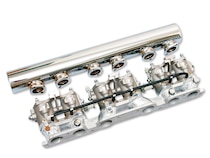 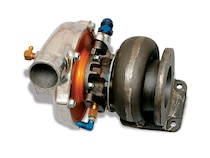 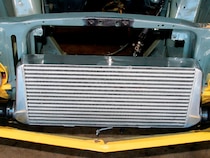 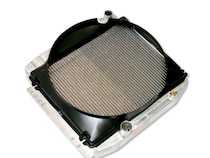 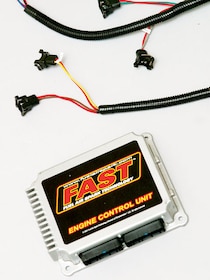 Performance Distributors, founded by the late Kelly Davis and professionally run by the Davis family for more than two decades, comes through with the Davis Unified Ignition (D.U.I). We like this system for its simplicity-coil in cap, precision curved for your application. Winterboer told Performance Distributors what he needed, and the shop came through with this complete, high-energy ignition package.

Heads Up
Ford six-cylinder heads didn't change much over the long production life of these engines. In fact, all heads are interchange-able. For the engine to perform properly, however, you must con-sider chamber size as well as valve and port size. It gets even more complex with Ford South America and Ford Australia head castings, which are better than North America's. Because these engines remained in production longer Down Under than they did in North America, there are some pretty terrific head castings available if you know where to look. There are composite castings with removable intake manifolds as well as a crossflow head. Classic Inlines can give you insight on where to find them.

The greatest shortcoming of the North American head is an integral, log-style intake manifold. Ford did this for cost reasons, but this head breathes poorly, and fuel-droplet distribution is horrid. Some heads, as a matter of luck and casting irregularity only, do better than others. Most of them cause poor idle quality and stumble-both difficult issues to overcome.

If you're going to stick with a North American head, base your choice on casting number and dimensions. Check chamber size and design. Are the valves shrouded or unshrouded? What happens if you machine the deck and wind up with a smaller chamber? Which head should you choose for your six-cylinder project? We discourage the use of early Ford 144ci and 170ci head castings because there's nothing to be gained from them. Chamber size will help compression and theoretically gain power, but valve sizing and shrouding will hurt performance-in short, no gain.

According to The Ford Falcon Six Cylinder Performance Handbook, the best heads to use are '77-and-later 200/250ci castings as they have the largest valves (1.76/1.38 inches intake/exhaust). They also have hardened exhaust valve seats from the factory and don't require modification. Chamber size is ideal at 60-62 cc. The book suggests checking chamber size before committing to a casting. Intake manifold volume is also larger with this head.

The McLearrans cracked the 10-second barrier by understanding how inline Ford sixes make power. Kelly's automatic turbo Falcon has been the acid test with blown engines, painful setbacks, and learning the hard way what works and what doesn't.

The McLearrans will show us how to build a solid, reliable Ford six that will make upwards of 350-400 hp using a carburetor, and Winterboer would like to do it with electronic fuel injection.

Will says air/fuel ratio was stable at 11:1 running on E85 Ethanol fuel with a 450-cfm Holley two-barrel carburetor. The improvement in torque on the second run came from a timing retard and increase in boost. Note that horsepower fell, yet torque increased. Torque is what matters most.

Here's what happened when the McLearrans installed the new aluminum head from Classic Inlines:

The common denominator is tuning and torque. Everything else remained the same except for a cylinder-head swap. The Classic Inlines aluminum head has given this 273ci stroker a broader torque curve on top of more horsepower and torque. This swap has yielded 40 hp and 64 additional lb-ft of torque. The McLearrans want to lean the mixture just a pinch to improve horsepower, in addition to 17 pounds of boost. A cam swap is also in the works. We'll keep you posted.

Because Winterboer has fitted his SportsRoof with a fuel-injected 273ci six-stroker, we don't know what to expect. When he puts this beast on a dyno, we'll bring you the results.