Inline Is Real Fine - Part 1 In A Three-Part Series

Jim Smart
October 1, 2007
Mike Winterboer will tell you a '69 six-cylinder SportsRoof isn't worth a flip unless the platform and engine work cohesively. He sent us a dream sheet, and we went to work contacting friends in the industry willing to help.

When Mike Winterboer of Classic Inlines called us about this project a year ago, we were excited. It wasn't a stump-pulling 427ci small-block, nor was it some high-revving 32-valve modular V-8 swap. It was a '69 L-code 250ci Mustang SportsRoof with a big inline-six. While swapping in a V-8 would have been less trouble and perhaps more interesting for most people, Mike decided to stick with the six-building a 250ci tall-deck stroker (272 ci) with a new, aluminum, high-swirl head; electronic fuel injection; and a whistling 50,000-rpm intercooled turbocharger.

After our discussion with Winterboer, we hung up the phone and concluded this was a terrific idea to sink our editorial teeth into-a lightweight, fuel-injected gray-iron inline-six sporting intercooled turbocharger power and a lot of stroke yielding all kinds of torque. What's more, it was high-tech, with the economy and efficiency of electronic fuel injection. He never had to sell us on this idea, it sold itself. This inline twisty project was a golden opportunity to try something new and learn a thing or two about Ford sixes in the process.

So why do something like this? In a world of redundant small-block projects, peppered with big-block and mod-motor undertakings, Winterboer's decision to build a turbocharged six-cylinder Mustang was intriguing. We liked the idea of an underdog six-cylinder Mustang getting all kinds of respect on the racetrack and at car shows.

Most people think of inline six-cylinder engines as wimpy, underpowered dinosaurs. However, those who remember the '60s know different. Fast six-cylinder drag cars were commonplace 40 years ago. There were Ford Falcons and Mercury Comets with three one-barrel induction systems. Chrysler racers brought out multicarb and Hyper-Pak Slant Sixes. There were also Chevy IIs and AMC Ramblers with badass inline-sixes cracking 11- to 13-second quarter-mile times in an era when these numbers were considered fast. Clifford Performance, Clay Smith Cams, Offenhauser, and a host of others supported the high-performance-six marketplace in those days. Racers eager to be different built six-cylinder drag cars. It became a subculture to be reckoned with.

Even today, the venerable inline-six remains in solid, consistent use around the world. Chrysler still offers the American Motors 258ci (4.0L) inline fuel-injected six in its eep line. General Motors offers an all-new inline-six in its Chevy Trailblazer sport utility. For a short time during the '80s, Ford was experimenting with a stillborn inline-six for T-drive applications, and that's because inline-sixes offer abundant vibration-free torque.

Pound for pound, inline-six engines make more torque than V-8 and V-6 counterparts because the six bores slap out a beat along a long crankshaft. This is why inline-sixes (and eights) were so common. Straight-eights, as they were called, offered much smoother operation than V-types-so smooth, in fact, that you could stand a quarter on the air cleaner and it wouldn't tip over. They idled at under 500 rpm, and you could lean on the throttle at low rpm and make all kinds of torque. The same can be said for inline-sixes, which offer exceptionally smooth operation when properly tuned.

The small Ford sixes (144, 170, 200, and 250ci) struggle with smooth operation because they suffer from induction-system shortcomings-that frustrating integral log manifold parked right on top of a hot exhaust manifold. Excessive heat around the carburetor coupled with poor fuel distribution along the manifold make Ford sixes challenging to tune.

So what to do about Ford six tuning challenges? Winterboer, along with the assistance of a committed, talented circle of friends, has begun answering this question by developing products and technology designed to improve Ford six performance. Field testing, coupled with old-fashioned seat-of-the-pants racing is what makes great performance products. Winterboer is working closely with friends Will and Kelly McLearran of Tucson, Arizona, to develop six-cylinder performance parts. Will and Kelly approach six-cylinder Fords by going with what works. Kelly's 10-second Falcon sedan is ironclad proof these folks know what they're doing. We had the good fortune of working with Winterboer, the McLearrans, and Kelly's brother, Brian Tuuri, on this project. 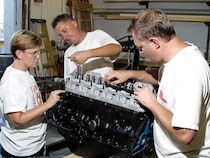 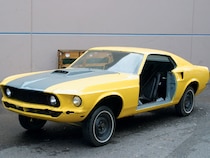 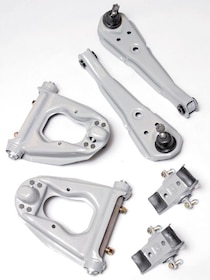 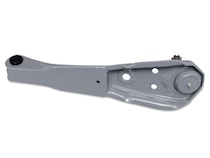 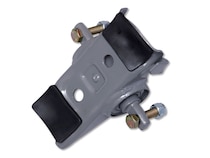 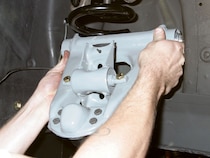 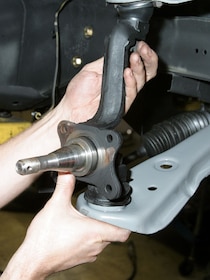 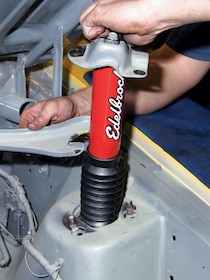 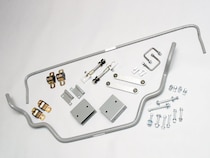 Building For Power
Many of us put the cart before the horse with our car projects. We build powerful engines and plunk them into vehicles with lame brakes and suspension. A good rule of thumb is to build a car that's ready for horsepower and torque. This is what Winterboer had in mind when he came to us with his '69 SportsRoof. What does it take to build a hot six-cylinder Mustang that's safe and reliable?

This is how we began a terrific turbo-six Mustang special from Classic Inlines and The Mustang Shop. Winterboer hauled the decrepit SportsRoof to Maaco in Phoenix for budget bodywork and paint. The car turned out better than we ever imagined. With tacky paint and masking tape hanging from the body, Winterboer hauled the car to The Mustang Shop in Phoenix for special preparation.

Meet Mr. Inline
Winterboer began his passion for inline buzz saws in the Blue Oval camp, teaching us how to build and enjoy hot small and large {{{Ford}}} sixes. His hobby became a business recently when he turned Classic Inlines into a full-time operation. There's plenty available for those who'd rather build a hot inline six. What's more, Winterboer has plans for the rest of Detroit, with performance goodies available for {{{Chrysler}}}, {{{Chevrolet}}}, and even {{{American Motors}}}. Expect to see more in Mustang & Fords.

Built For Durability
When we discussed the rear axle, Winterboer had to do a lot of thinking about what he wanted from his Mustang. We talked about building a strong 9-inch rearend. The discussion then led to cost. Winterboer was interested in both speed and cost. To build an entire 9-inch Ford rear wouldn't happen quickly. He needed a strong differential quickly-overnight. We called Randy's Ring & Pinion and asked if they had an 8-inch limited-slip with 3.55 cogs. This is a blueprinted piece that arrived ready for installation with all hardware and gaskets.

Stop!
Because of its high-tech demeanor, we couldn't imagine doing this car any other way than with four-wheel disc brakes. Turbocharged, electronic fuel-injected technology deserves corresponding stopping power underneath. In front are 12-inch Baer Claws followed by 11-inch binders in back. Baer brakes install in a matter of a couple of hours once all of the old parts are removed. We could've gone with larger Baer brakes had Winterboer chosen something larger than a 15-inch wheel. We understand his mindset, however-a retro '60s look on the surface, with period-correct Torq-Thrust D wheels.

Baer has provided us with everything needed to get our brakes installed, including steel lines and parking-brake cables. It doesn't get any easier than this. Take a look at the view through those American Torq-Thrust spokes.