We turn an 2004 Harley-Davidson Edition F-350 Power Stroke into an equal opportunity smoker. 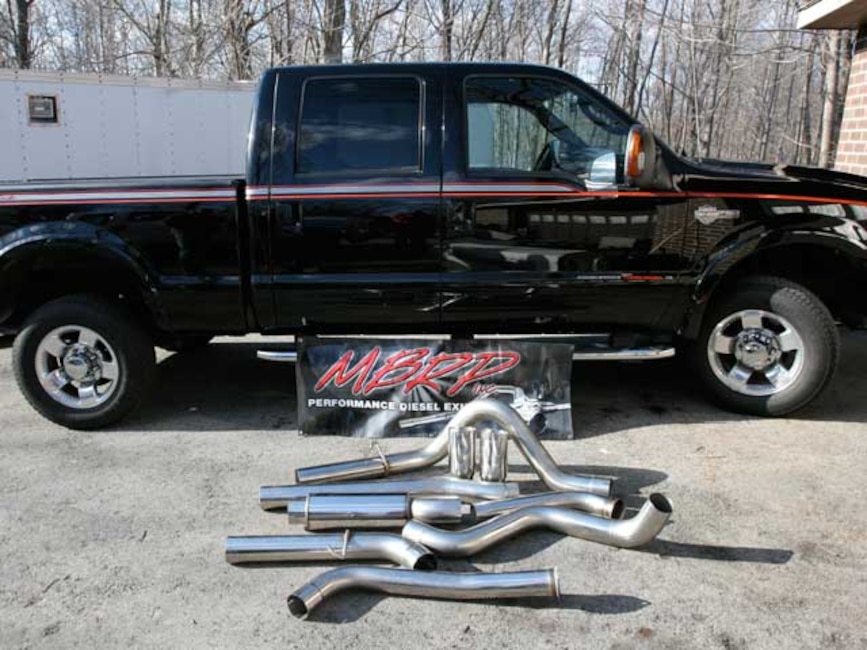 Cool Duals is offered in a variety of configurations. We went with the stainless steel setup that replaced everything except the catalytic converter from the turbo to the back bumper. The exhaust now pops out behind each rear tire. 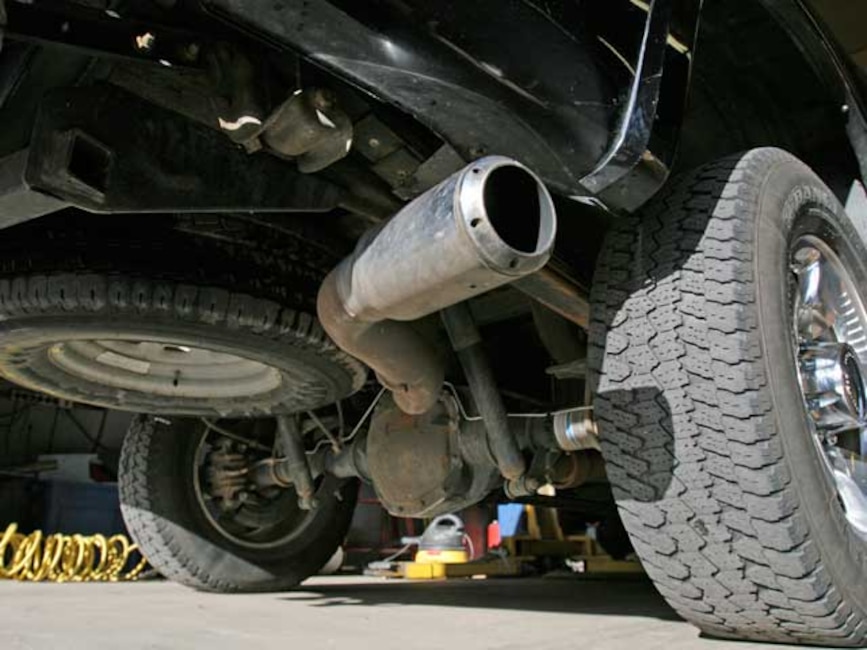 This is the puny exhaust system provided by Ford Motor Company. The Harley-Davidson edition Super Duty trucks feature a nicer-than-stock exhaust tip. After one look at the MBRP Cool Dual exhaust tips, we think the stock setup looks like junk. 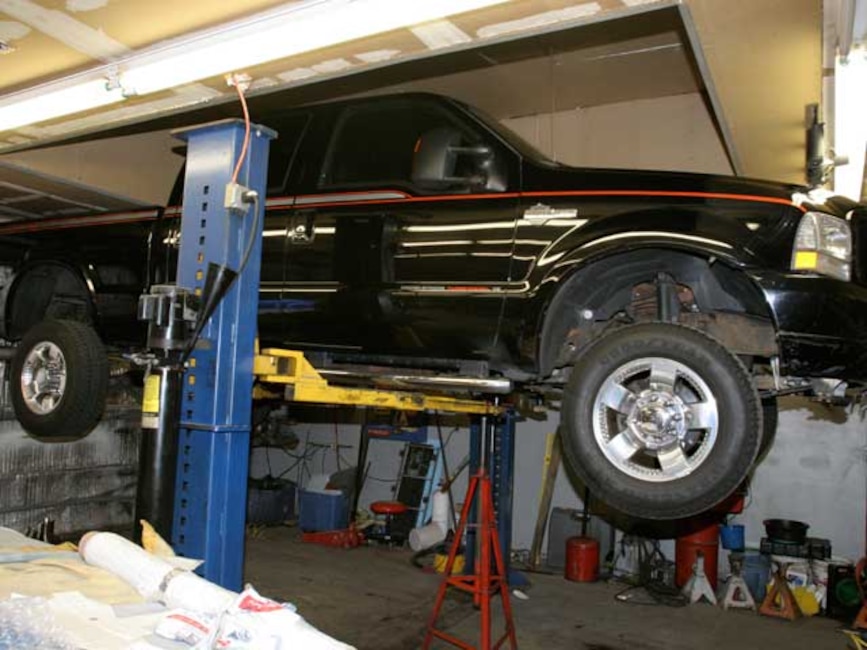 Sometimes we don't have the brightest ideas, and this could have been one of them. Since it was an exhaust swap, we raised the truck on a lift at a private shop. The lift was rated to 9,000 pounds, but to be honest, it was downright scary to stand under the truck during the install. Even though our truck's 7,500-pound weight fell well under the lift's rating, our nerves were spastic. The lift arms looked like they were straining and could snap. 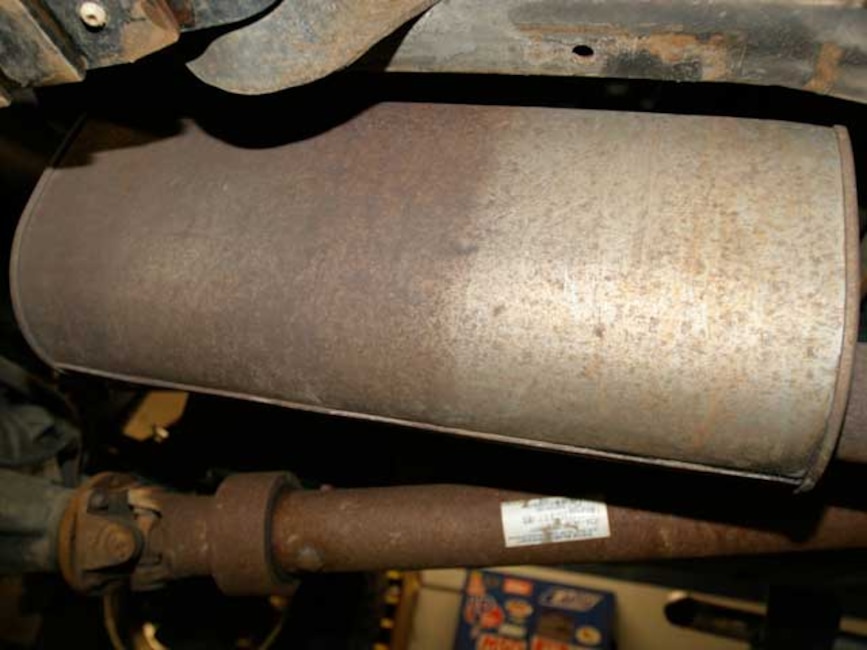 This big, ugly thing is the muffler from Ford. We dumped it as quickly as we could get it off. 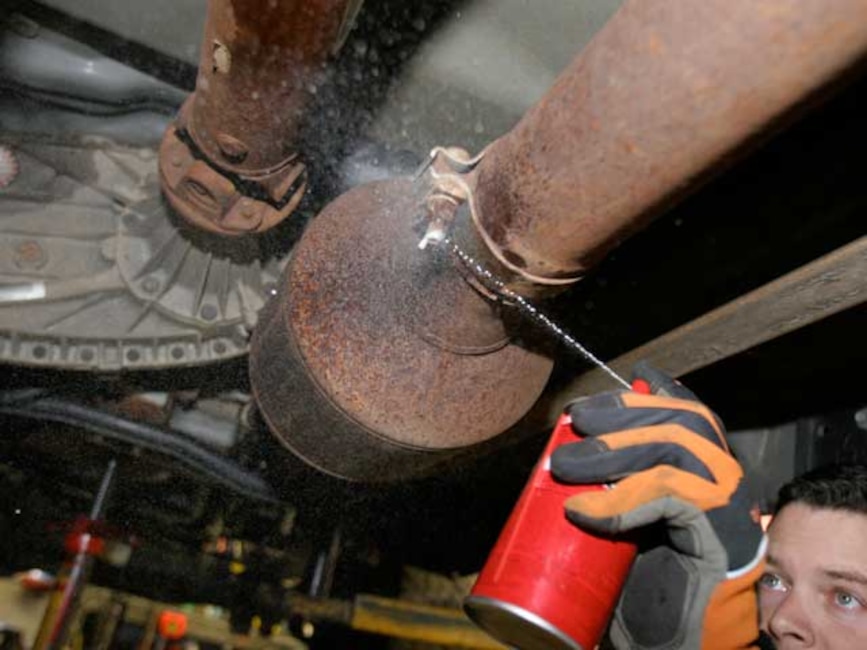 Anthony Briante hit all the nuts and bolts of the system with lubricant to loosen up the rusty parts.

Modified diesel-powered trucks are cool. Throw a better tune-up into your truck from any company that makes handheld tuners or computer chip upgrades and not only will power and torque increase, but the cool diesel-smoke effect comes into play. We all do it--sit at a light and take off aggressively, only to look in the rearview mirror to see the cloud of smoke pouring out the exhaust system. It's fun, but the smoke only pours out of the passenger side. MBRP Performance Exhaust has a solution that will not only free up horsepower due to a more efficient exhaust system, but will also kick out diesel smoke from both sides of your truck. As usual, the exhaust tone will deepen with the aftermarket setup.

We met these guys at last year's SEMA show thanks to a huge calling card sitting in their booth: a monster-trucknlike F-350 that towered above everything else. It featured an exhaust system that was obviously built to impress by sheer size, a monster set of tailpipes. The truck did its job, and we started talking to the MBRP reps. They gave us a quick walkthrough of the MBRP product lineup, and we were instantly sold on its Cool Duals exhaust system for Power Stroke trucks. MBRP offers a wide variety of systems, but Cool Duals lets us spew diesel smoke from both sides of the truck when whaling on the loud pedal. The '04 Harley-Davidson truck we used for the install is an equal opportunity smoker with this system. Since this pickup tows the owner's racecar trailer around the country to Outlaw 10.5 events, it's an added bonus that the exhaust system frees up valuable horsepower.

The exhaust system starts at the turbocharger with a larger downpipe, flows into an intermediate pipe, and then attaches to the factory catalytic converter. Several diesel techs at a few different Ford dealerships said to keep the factory catalytic converter in place on the 6.0L diesel engines. The Cool Duals system requires the factory cat, eliminating any concern on our end. We're not sure why these techs made that recommendation, but given how sensitive the 6.0L engines can be, we aren't taking any risks. It's rumored that eliminating the cat will actually cause the engine to make boost at idle. If that's true, it can't be good. This truck already had a set of head gaskets replaced. We installed the Cool Duals as-is and kept the stock catalytic converter.

After the cat, a larger, single exhaust pipe is attached to a giant muffler. There are two exits out of the muffler; then the exhaust system splits and shoots over the axle to exit behind each rear tire. The polished stainless-steel tips are sweet-looking with the dual-wall, rolled construction and finish off the system nicely. Our Cool Duals setup was made from stainless steel, meaning these pipes will probably outlast the truck.

Installation is easy and straightforward. It took Anthony Briante, owner of the truck, a few hours to install the entire system. We have the benefit of using a lift, which certainly helps. Cool Duals comes as a one-size-fits-all kit. Cutting down the post-catalytic converter pipe is required and is dependent on the size of the truck. The instructions give the exact measurements for each vehicle configuration. Our pickup is a supercrew cab with a shortbed.

We didn't dyno the system, but with a better exhaust, the backpressure is less in the turbo exhaust housing, leading to a more efficient turbo and hence more horsepower. EGTs are also reduced in towing situations thanks to the less-restrictive exhaust. Another bonus, now we can load up the 100hp tune-up from the DiabloSport Predator handheld tuner. Run the Predator's big tune-up with an aftermarket exhaust system only. Without it, the EGTs are way too hot, and you'll burn up the engine.

After our free-flowing exhaust was installed, the big tune-up went into the computer, and we were off smoking the tires and mixing the white clouds with black ones from the dual-exhaust system.