Pete Epple Technical Editor
March 5, 2013
Photos By: Marc Christ
Nitrous Oxide Systems sent us one of its EFI wet nitrous kits. It was originally intended for the AMSOIL GT, but we repurposed it for our Three-Valve Fox.

In drag racing, performance gains usually come in small increments. Dropping over a second from one run to the next is fairly unheard of—but in our case, it really didn't take a whole lot. Now don't get me wrong, the last thing we want is to sound cocky, but our first 10-second pass with our Three-Valve Fox-body project happened almost by accident.

It was about six weeks after buttoning up the 4R70W swap. We had about 15 passes on the new combo, and we had made small suspensions changes trying to find a little e.t. With a mild engine combo (basically an out-of-the-crate FRPP Three-Valve engine), and everything else designed to handle much more, it wasn't hard to find what seemed to work the best, and any real improvements proved hard to find.

Traction wasn't an issue, leaving off the transbrake meant we couldn't throw any more at it on the starting line, as we were launching at the stall of the converter (3,950 rpm), and aside from changing shift points, that was about it for changes that effected e.t.'s.

The car was great on the street and ultra reliable and consistent on track (as much as it can be for only having 15 runs on it), but we wanted more. We've always talked about adding boost to the Three-Valve powerplant, but firewall clearance knocked out any plans we had for a positive displacement setup, and while we were still considering a centrifugal or turbo setup, we wanted something quick and easy that would add power and drop track times. Enter nitrous.

If you look way back in the early writings about the AMSOIL GT, we initially planned to run a wild combo of boost and nitrous. To help make that happen, NOS sent us one of its universal EFI wet kits to install. We mocked the kit up, but never actually used it, as we were already at the limit of the stock short-block. When the ported heads and camshafts were installed, the nitrous kit was pulled off and has since sat on a shelf in our warehouse—until now.

Knowing we had a kit to play with, and always wanting to go quicker and faster (after all, that's the point of all of this), we dusted off the nitrous kit, made sure we had all of the pieces, and stayed late one night. Our good friend Kyle Miller came over to lend a hand, as he is extremely familiar with the ins and outs of nitrous kits. Within about two hours the kit was installed and we were ready to test.

We mounted the single Fogger nozzle in the underside of the cold-air intake, pointed straight at the center of the throttle body opening. Wanting to run about 100 extra horses, we jetted the nitrous side with a 051 jet and used a 030 jet for fuel. To be safe, we pulled 4 degrees of timing from 4,000 rpm on at the recommendation of Chris Jones from Blow-By Racing, and headed out to play. A few quick hits in the parking lot quickly revealed how much the mod motor liked the spray. But what would it equate to at the track?

We unloaded at Bradenton Motorsports Park for test and tune. The first pass was intentionally soft, as we didn't purge the nitrous lines, and we left off the foot brake. The result was a 1.75-second 60-foot time, but there was a massive improvement at the big end. We were rewarded with an e.t. of 11.60 at 118 mph. Our previous best time was 12.26 with the auto. Before the nitrous, we found that leaving the converter unlocked allowed the car to rev to about 6,500 rpm going through the lights (locking the converter dropped the trap rpm to about 5,100), so we left the converter unlocked for the first pass. Locking the converter allows more horsepower to get to the rear wheels, though the slippage while the converter was unlocked was noticeable on the bottle. The car didn't feel much different once it was in high gear, which made us wonder what would happen with the converter locked?

After giving the car time to cool we headed back out. It was at this point we realized the bottle was quite cold (725 psi) and we didn't have a way to heat it. Our “100 shot" was based on 900 psi, so we were leaving some on the table. After a healthy burnout we inched into the staging beams. We purged all of the air from the lines, brought up the rpm, engaged the transbrake, and waited for the lights. To say the car left violently would be an understatement. We covered the first 60 feet in 1.53 seconds with no tire spin. The car pulled strong through the middle of the track, and at about the 1,000-foot mark we locked the converter and it felt like hitting the nitrous again. Elapsed time dropped to 11.19 at 121 mph. We didn't how much we would gain with the nitrous, but were ecstatic with being so close to the 10s. As the track crew put a fresh prep on the starting line, we got suited up in the staging lane. With our lane called, we fired the engine, and that's when the rain came.

Fast-forward one week and we were back at Bradenton, this time with a heat gun to get some pressure in the bottle. At the urging of a friend, we set bottle pressure at about 1,025 psi. After rowing through the gears in the water box, we purged the nitrous system, tripped both lights, and locked the converter. The car violently spun the tires as if they were still wet. After pedaling the car to get the wheel spin under control, we still went through the lights in 11.49 seconds at 124 mph. The 60-foot time was a laughable 1.94, but the power gave us hope for the 10s.

Next time, bottle pressure was at about 950, and when we let go of the button, the car left hard. It made a slight move to the right, but the 60-foot time was 1.56. The tires dug in hard when we shifted into Second and the converter locked. When we crossed the finish line, we were rewarded with a 10.99-second slip at 124 mph.

We made two more passes that night but weren't able to repeat the 10-second pass. Bottle pressure may have made the difference, as the six passes and some street time used up most of the bottle.

We are very excited for the coming weeks. We plan on jetting the nitrous up to a 150 shot, as well as a full tune to make the most of the nitrous combo. Keep an eye on our Facebook page for updates as we dyno tune and track test the car some more. 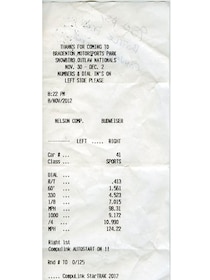