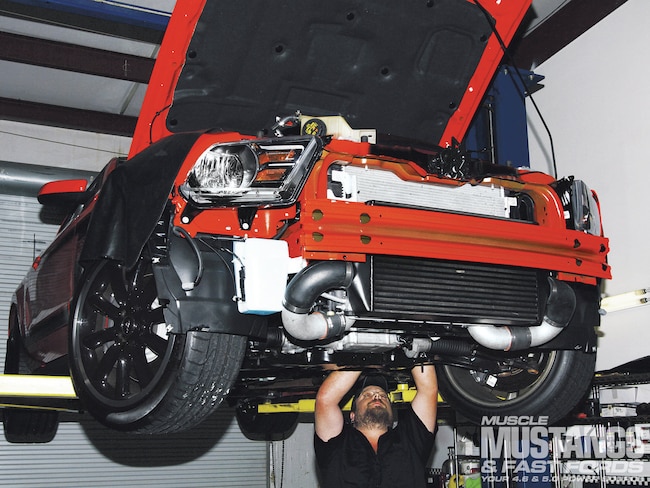 Since aftermarket companies began releasing supercharger kits and bolt-on parts for the '12 Boss Mustangs, shops (and others) have been pushing the envelope. We've seen turbo systems and superchargers pushing the 1,000hp mark, and even beyond. The true ability, and durability, of the stock components has been established. We get it--Ford has created an exceptional product.

Maybe you've already purchased a Boss of your own, or you're waiting for your School Bus Yellow '13 to come, or you're just a Mustang enthusiast who hopes to one day have the budget to buy a late-model Boss. On all accounts, you're most likely not looking to make 1,000 rwhp. You're probably not even expecting it to make 750 or 800 rwhp. That's a bit extreme for most, especially for a limited-production vehicle like a Boss. We love modding as much as anyone, but c'mon.

So, what is the route to take? Do you wrap yours in a bubble, stuff it in a climate-controlled storage unit, and hope the Mayan calendar starts over?

Of course not. Ford's engineers created the Boss to be driven--on the street and on the track. Sure, there are limitations to its abilities, being a production car and all. But it is an enthusiast's car--meant to be a rolling fun factory.

But let's face it--even 400 rwhp can become boring after a while. Heck, your neighbor's stock GT can do that with a tune. To find out how Boss owners are going to the next level, we tracked one down at JMS Chip and Performance in Lucedale, Mississippi. There, owner and tuner Monty Johnson had Jack Bleich's bone-stock Boss in for some tasteful and sensible mods--in four steps.

First on the plate was a custom JMS calibration using an SCT X3 handheld (PN; $379 with custom tune) on the stock hardware. Johnson first strapped Bleich's Boss to the Dynojet and spun the rollers. The results were an expected 368 rwhp and 316 lb-ft of torque.

After the flash, it picked up 18 rwhp and 28 lb-ft, making our new baseline 386/344. But Johnson and his JMS crew were just getting started.

Back on the dyno, Johnson loaded the tune and spun the rollers, resulting in 633 rwhp. Though good enough for most, Bleich wanted to take his Boss a little further with a few of the typical bolt-ons.

Bleich requested headers and an H-style mid-pipe from American Racing Headers (PN ARH-MST-CY78WC; $1,590), an axle-back exhaust from Magnaflow (PN 15589; $760), billet aluminum lower control arms from UPR (PN 2002-17; $189.99), and a one-piece aluminum driveshaft from Dynotech. Though the control arms certainly don't add horsepower, the aluminum driveshaft should make the car quicker on the track due to less rotating weight.

On the Dynojet, Johnson recalibrated the ECM to work with the new exhaust components. Headers and exhaust are normally worth about 30 rwhp on an otherwise-stock Boss, according to Johnson. They were worth 48 rwhp on the already-boosted Boss of Bleich, making our new peak horsepower 681. Maximum boost held steady at 10 psi, even with the new free-flowing exhaust. 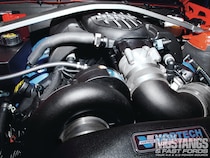 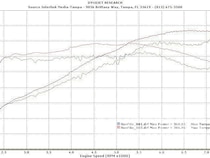 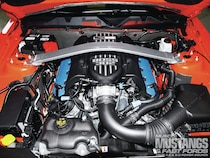 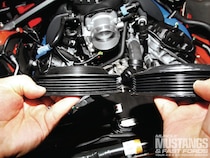 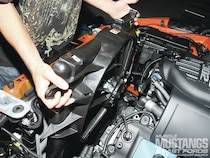 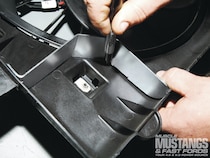 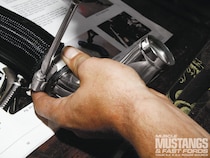 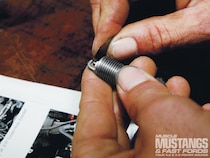 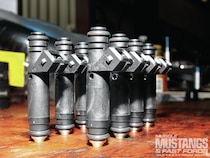 The stock S-trim comes equipped with a 3.6-inch pulley. Since Johnson felt comfortable adding a few pounds of boost, he had Snelgrove swap it for a 3.33-inch pulley. "This should get us to right around 12 pounds of boost," said Johnson. Sure enough, after re-adjusting the tune, he spun the rollers on the dyno and saw a maximum boost output of 12 psi at 8,000 rpm. Power output was up to 696, a gain of 15 rwhp.

We haven't pushed it to the limit, but Mr. Bleich will have a long relationship on the street and track with his much-improved Boss. Horsepower output is up by almost 100 percent, and he doesn't have to baby it or run any fancy, expensive fuels--the perfect balance.