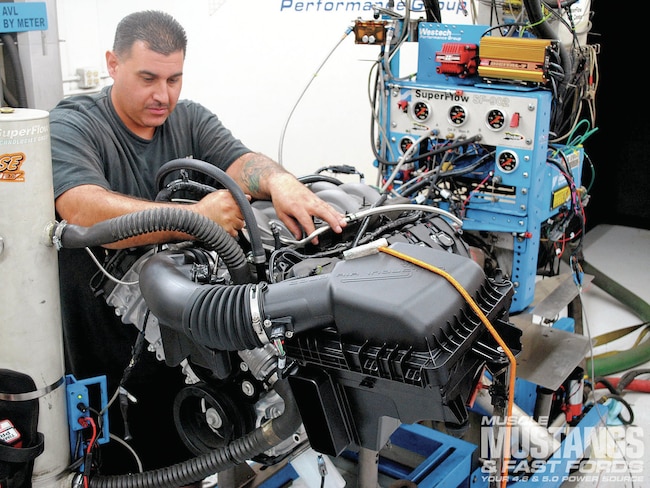 Since the demise of the '04 Cobra, Mustang owners have been limited to the Shelby offerings if they were looking for honest GM-killing power. Lucky for enthusiasts, Ford stepped in to fill the performance void by offering the new 5.0L Coyote motor. Though it lacked the boost we loved so much in the '03-'04 Cobras, the new motor offered some impressive power--and lots of potential. Thanks to the hike in displacement, variable cam timing, and revised intake design, the output of the 5.0L surpassed the previous 4.6L supercharged and non-supercharged Mustang engines!

But we want to know if the new motor responds to modifications as well as the original, or had Ford already extracted all the power available from the latest mod motor. The introduction of the Boss version is evidence that there was even more power waiting to be unleashed, but we wanted to see how well the new 5.0L responded to mods with our very own eyes.

In the grand mods-for-mods tradition, we contacted the good folks at Ford Racing who were kind enough to supply to not only a 5.0L crate motor (PN M-6007-M50), but also a complete Control Pack unit to allow us to run the motor with full control over both the drive-by-wire throttle body and variable cam timing. Designed for a retrofit application, the Control Pack includes the ECU and wiring harness, MAF and air intake system, factory airbox, OBD-II diagnostic port, and a complete calibration. Once installed, our system started on the first push of the button.

Thanks goes out to Westech's Ernie Mena, Steve Brule, and Troy Goldie for hooking up the Coyote for our test. First time hook-up on any motor is time consuming and difficult, but they performed the task in record time and had the motor mounted, plumbed, and ready to rock. Unfortunately for our test schedule, we did not have any software to allow tuning the factory ECU. This situation will be remedied for Part 2, but it was important to see how well the motor responded to modifications without the ability to tune. For our needs, this included both long-tube headers and nitrous oxide, but the first order was to run the motor in "as-delivered" condition.

The 5.0L Coyote was first run in stock trim. This included breathing through the stock air filter, MAF, and air intake assembly, and exiting through the factory exhaust manifolds. On the engine dyno, the exhaust manifolds exited through a set of short 3-inch exhaust pipes (no cats or mufflers were employed). The motor was also equipped with a prototype of the new electric water pump from Meziere (no other accessories were employed).

The 5.0L Coyote motor produced 448 hp at 6,600 rpm and 405 lb-ft of torque at 4,500 rpm. This compares to the rated output of 412 hp at 6,500 rpm and 390 lb-ft at 4,250 rpm. The difference between our numbers and those generated by Ford can be attributed to the lack of exhaust, accessories, and the coolant temperature (165 degrees). This modern 5.0L carries power beyond 6,000 and managed to thump out over 375 lb-ft of torque from 4,000 rpm to 6,000 rpm. Even down as low as 2,700 rpm, the Coyote produced 325 lb-ft of torque. The factory calibration produced 26 degrees of total timing (less lower in the rev range) and a consistent air/fuel curve that hovered safely in the low-mid 12s. We know that even the stock motor will respond to improvements in the air intake system, but we will explore this once we have the ability to properly tune the combination. After back-up runs illustrated the repeatability of the combination, we were ready to start making changes.

First on the list of mods was a set of long-tube headers. These beauties came from American Racing Headers and feature 304 stainless steel construction, 3/8-inch-thick flanges, and merge collectors with scavenge pipes. The headers are available with either 13/4 or 17/8-inch primaries and a direct-fit X- or H-style mid-pipe. The system can be ordered with or without cats, and is obviously for off-road use only. Installation of the headers was straight-forward and included an 18-inch collector extension to serve as the exhaust system. Equipped with the headers, the peak power numbers jumped to 462 hp at 6,600 rpm and 411 lb-ft at 4,400 rpm, but the torque output was up by as much as 49 lb-ft at 3,200 rpm. Oddly enough, the installation of the headers altered the air/fuel ratio. The air/fuel was now richer (as rich as 11.5:1), while at the top of the rev range the air/fuel was nearly perfect at 13.0:1. We suspect that additional power was available from the header swap with the ability to further tune the combination, but know that the headers offered significant power gains through the entire rev range.

The final test was to install a wet EFI nitrous kit from Zex designed specifically for the '11 Mustang. The Zex nitrous kit features Active Fuel Control that alters the fuel delivery according to the nitrous bottle pressure. The electronic TPS activation switch is designed specifically for the drive-by-wire throttle body, and the Zex system is fully adjustable from 75 to 175 hp.

Given our limited ability to tune the ECU (we wanted to retard timing by 3-4 degrees), we decided to play it safe and start with the minimum power setting of 75 hp. Not wanting to detonate our brand-new FRPP crate motor, we added a splash of Rocket Brand race fuel to the mix as well. Using Westech's custom bottle heater, we raised the bottle pressure to just over 900 psi and gave the system a whack. The Zex nitrous system performed flawlessly, and peak power output jumped to 554 hp and 540 lb-ft of torque. The air/fuel mixture hovered safely once again near 11.5:1 and the 5.0L never missed a beat.

With over 550 hp, this is already one serious crate motor, but we have just scratched the surface in our seemingly never-ending series on mods for mods. 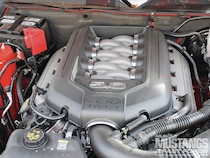 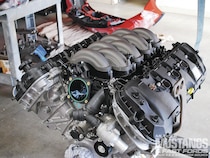 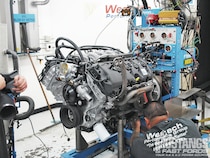 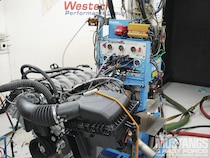 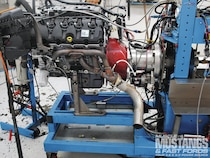 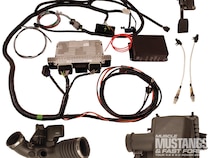 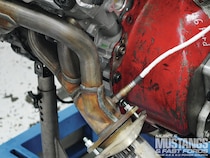 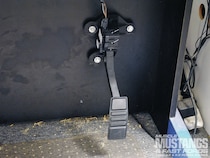 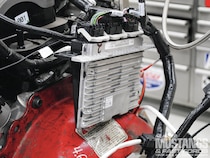 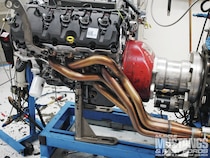 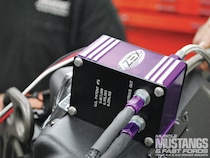 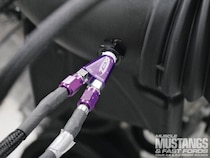 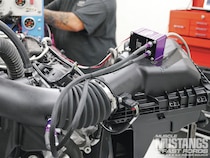 Replacing the stock exhaust manifolds with long-tube headers had a decided effect on the power curve. More than just an increase in peak power from 448 hp and 405 lb-ft of torque to 462 hp and 411 lb-ft of torque, the headers were worth as much as 49 lb-ft at 3,200 rpm. Best of all, the headers improved the power output through the entire rev range. It is also important to note that none of the gains came from tuning the combination--all we did was install the headers.

Nitrous is great because it always adds power and a lot of it. Using the Zex wet EFI kit, we installed jetting to supply an additional 75 horsepower to our already potent Ford Racing crate motor. By optimizing the bottle pressure, the power output jumped from 462 hp to 554 hp. Torque production soared as well, from 411 lb-ft to 540 lb-ft. The Zex nitrous kit offered nearly 100 hp through the entire rev range.