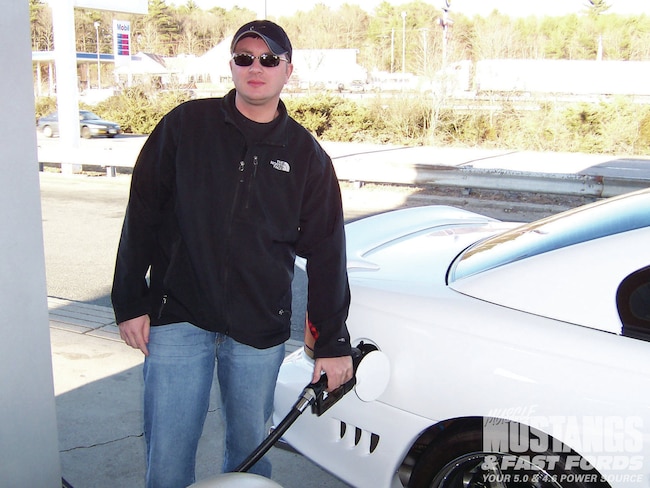 Nowhere is this compromise more evident than the performance limitations presented by the use of pump gas. High- octane race fuel allows elevated boost levels combined with aggressive timing and fuel curves. To minimize engine damage, these performance variables must be scaled back when running pump gas, mainly due to the lack of octane and the high cost and availability of race fuel. If you think the current price at the pump is outrageous, try filling up your Mustang, truck, or SUV every week with race fuel. Having to shell out $10 a gallon will certainly limit those impromptu trips to 7-11 for a Slurpee and a Slim Jim.

When it comes to maximizing performance, high-octane race fuel can be very beneficial. Whether your build up includes a high-compression, all-motor, or nitrous application, or the additional power offered by forced induction, race fuel allows you to run the necessary air/fuel, timing and/or boost pressure required to produce maximum power. The same cannot be said of pump gas, as the lower octane will not tolerate elevated boost and/or timing values.

Lucky for enthusiasts, there is a third choice-water methanol injection. Snow Performance has been at the forefront of the water/methanol invasion, and for good reason. Its Boost Cooler systems have proven themselves both in the heat of battle and the daily grind. The benefits of water/methanol injection are many, but for our needs, we can focus on the two most important-octane and intercooling.

Used as an effective replacement for race fuel, the methanol portion of the water/methanol injection offers a significant increase in octane rating compared to typical pump gas. When combined with the anti-detonate properties of water, the mixture dramatically increases the fuel's resistance to detonation. Much like race fuel, injection of water/methanol will provide the opportunity to get more aggressive with the tune (air/fuel and timing) and/or safely allow an increase in boost pressure. Toss in the significant drop in inlet air temperature offered by injection of the mixture into the air stream (especially on boosted applications), and you have the makings of some serious power potential.

One of the potential problems associated with any form of injection (fuel, nitrous, or even water/methanol) is that too much of a good thing can be bad. Excess fuel will richen a mixture and reduce power, while excess nitrous can lean out a mixture and reduce the number of working pistons. Excess water/methanol errs more toward the fuel side, as too much will likely cause nothing more than a reduction in power (except on diesel applications).

As with fuel injection and nitrous oxide, the key to success with water/methanol is metering. Excess will actually hurt power, but combine the cooling and octane benefits with proper tuning and you have serious power potential.

The Snow Performance Boost Cooler features full adjustability thanks to a Digital Variable Mapping Controller. The injection can be tuned based on a map (or boost) signal and dialed in using the easy-to-read (and adjust) LCD screen. Toss in available upgrades, such as the Safe Injection that offers the ability to reduce the boost or timing if the water/methanol system detects a loss in system flow, and you have one complete (and virtually fool-proof) performance system.

Performance products always sound great on paper, but we here at MM&FF are more concerned about how they perform in the real world. The Snow Performance Boost Cooler has never failed to impress us, but it must be stated that (unlike nitrous), water/methanol alone is not going to dramatically increase the power output of your vehicle. The cooling effects can improve the power output of a boosted motor, but the real gains will come from the ability to crank up the boost, lean out the mixture, or add ignition timing that would otherwise be limited by pump gas.

It's important to note that even the intercooled combination benefited from the use of the Boost Cooler from Snow Performance. Running 20 psi of boost netted 659 hp and 594 lb-ft of torque on pump gas at 18-19 degrees of total timing. After dialing in the Boost Cooler, the ignition timing was increased to a full 26 degrees, where the combination netted an impressive 762 hp and 691 lb-ft of torque-impressive considering there was no change in boost pressure.

This modified mod motor was tested with a (non-intercooled) T-trim Vortech supercharger making 18 psi of boost. Run sans water/methanol with the timing pegged at 17 degrees (safe level on pump gas), the supercharged stroker 4.6L produced 589 hp and 477 lb-ft of torque. Once dialed in with the Snow Boost Cooler, the timing could safely be advanced to as much as 23 degrees. The result was a substantial increase in power, to a devilish 666 hp and 515 lb-ft of torque. The ability to Thump on Pump was further illustrated with the upgrade to an intercooled F-1A Procharger. Combining the intercooled Procharger with the Boost Cooler and just over 24 psi of boost resulted in an amazing 743 hp and 581 lb-ft. 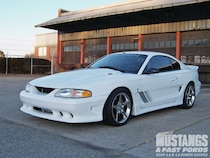 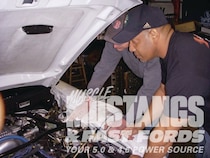 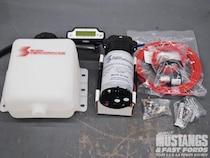 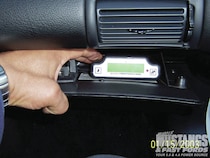 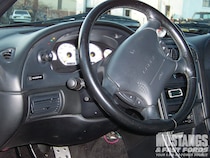 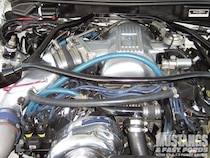 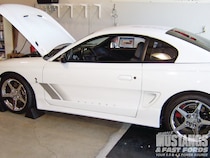 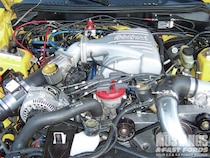 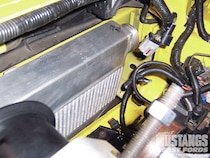 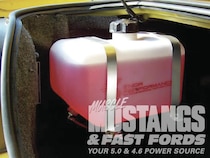