Part 1: We give a new 3.7L Mustang a chance with a cold-air kit and tuner 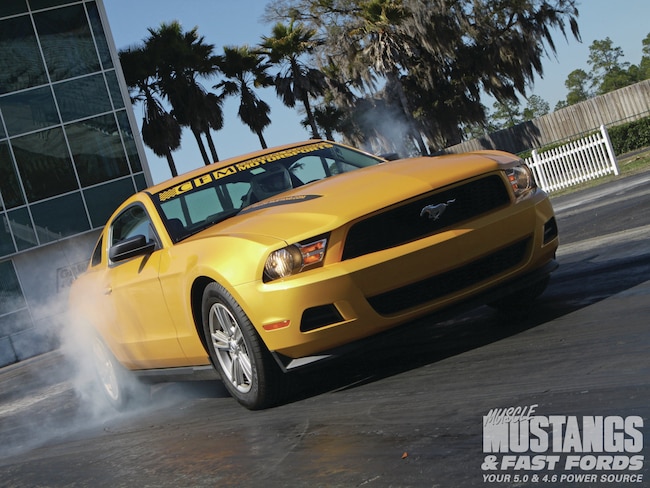 There's no doubt that the '11 Mustang GT changed everything. It sports over 400 proud ponies, and car enthusiasts worldwide took notice. Now the Mustang GT is seen in a different light.

But what about how we Mustang people see it? Well, we love it, and many Mustang fanatics are also jazzed about the new V-6. But is it just a V-6? Or is it cool now because it makes almost as much power as the GT made just the model year before? Read on and decide for yourself.

If you read the introduction of the new 3.7L V-6 in the June 2010 issue, then you already know it's engine has 305 hp and 285 lb-ft of torque, along with a 30-mpg rating. That's a 95 hp and 45 lb-ft of torque increase over its predecessor, the larger 4.0-liter. Though the all-aluminum construction and DOHC design both help achieve the 30-mpg fuel economy, the Ti-VCT technology is the real hero, allowing intake and exhaust cam adjustments to achieve full actuation in the blink of an eye. This optimizes cylinder filling in a wide rpm range and allows the engine to make loads of power.

Over the next few months, we are going to install the latest aftermarket parts on an '11 Mustang V-6. I know I just lost half of you, but trust me--those who follow the story won't be disappointed. This month, we'll establish a baseline, install a C&L cold-air kit, and re-flash the computer with an SCT tuner. Later, we'll progress into a full exhaust system and gears, and lastly, a power adder. Our weapon of choice is a Yellow Blaze coupe equipped with the six-speed automatic transmission and standard 3.15 gears. In the old days, the V-6/auto combination would be a real wheeze--today, not so much. Owned and driven by Hector Navarro of Winter Springs, Florida, the sticker price on this well-equipped coupe was just shy of $28,000.

Navarro owns and operates Central Florida Motosports (CFM), which until recently, specialized in Focus performance and technology. But with the introduction of the new 3.7L V-6, Navarro has expanded his scope to include the Mustang.

"The new V-6 Mustang is a great value for entry-level customers, and I think they will become more popular as time goes on," says Navarro. "Those who buy a V-6 will have money left over to buy parts."

It's a great theory, but just how well do the new V-6's respond to bolt-ons? To find out, we first strapped the Mustang to the DynoJet chassis dyno at Lamotta Performance in Longwood, Florida. Using Third Gear as the gear of choice and SAE correction, the result was 237 rwhp and 227 lb-ft of rear-wheel torque. Considering our test vehicle is an automatic, those are respectable numbers. Of course, the real test would be at the track, but we'll get to that in a short bit.

Since one of the first mods people make is the cold-air kit, we chose to do that first. C&L Performance has been in the Mustang performance industry for almost 20 years. Lee Bender of C&L painstakingly develops the products through CAD drawings, one-off prototypes, flow-bench testing, and ultimately, dyno-testing. Each product is designed to be a direct bolt-on part, without cutting, sawing, or otherwise modifying your car. Since C&L was first to the market with its '11 V-6 cold-air kit, we grabbed one of the first ones for this test.

Retailing for $299, this kit is the perfect starting point for anyone wanting to get more out of their new Mustang. The best thing about it is its no-tune-required capabilities. 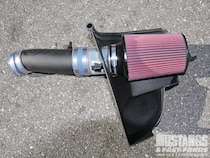 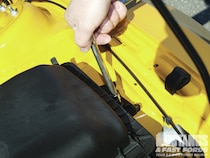 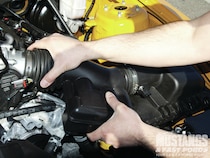 At its smallest point, where it meets the throttle body, the diameter of the inlet tube is 3 inches. So, even if you upgrade your throttle body later as parts become available, the C&L intake will still be able to provide plenty of airflow for your application.

While still on the dyno, Jake Lamotta installed the cold-air kit in about five minutes using simple handtools. The results were surprising--247 rwhp and 236 lb-ft of torque. That's without changing the tune, or anything else on the car for that matter. A 10hp increase is about what Bender expected. "A no-tune-required intake should see roughly a 10-11hp increase," said Bender. Not bad for under $300 and a few minutes of work.

But we wanted more. Another fine example of a simple mod most people find themselves doing when a car is fairly new is a handheld tuner. SCT Performance provided us with a new Xcal3 for our V-6, which retails for about $379. Chris Johnson of SCT, our company insider, shed some light on cracking the code on this new engine and what it means for you, the consumer.

"Tuning the V-6 is very similar to the 2011 Mustang GT," said Johnson. "The two control systems share the same logic, but use a slightly different computer." With TiVCT, we expected the 3.7-liter to respond well to the tuner, like the new 5.0-liter. After a re-flash, Lamotta spun the rollers yet again. This time, it produced 260 rwhp and 245 lb-ft of torque. With the speed limiter deactivated, the V-6 was able to wind up to its new 6,500-rpm limit.

The numbers are impressive on their own, but what would that translate to on the track? To find out, we headed to Gainesville Raceway in Gainesville, Florida. To make the comparison fair, we established a baseline in stock trim. After bogging a couple of launches, then spinning, Navarro finally got the launch just right. When the board lit up on the big end, it read 14.25 at 99.99 mph. Though inconsistent winds tried to impair us, Navarro backed up the run with a 14.22 at 99.52 mph. Both 60-foot times were in the 2.2-second range

So far, his basically stock V-6 has under $700 worth of do-it-yourself parts on it, and already runs 13s at over 100 mph. So where are we going with this? Check back next month as we install BBK headers and midpipe, a Magnaflow after-cat exhaust system, and a set of gears--complete with a track test, of course.