Coyote Mustang Hellion Turbo Install - To Hellion And Back 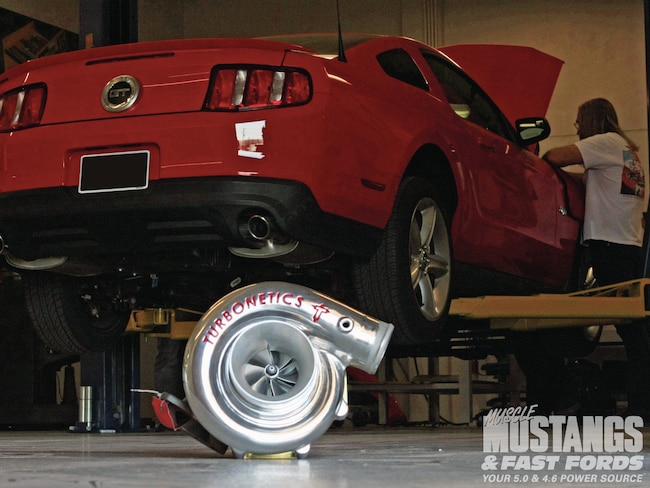 It's been about a year since the Coyote 5.0L-powered Mustang has hit the streets, and MM&FF has chronicled its successes, from nitrous to exhaust upgrades, to bolt-on cold-air kits. We've even added a few different supercharger systems in search of big power from Ford's superstar powerplant. On the dragstrip, we've watched sacred time barriers go down from the 11s to the 8s and with relative ease. This month, we turn to a turbocharger. Our travels took us to the El Paso, Texas-home of MSD Ignition's head-quarters as the company adds a single turbocharger to its brand-new 2011 Mustang GT. We added a turbo to our new '11 Mustang so we could R&D parts under boost, states MSD Marketing Director Todd Ryden.

The turbo kit came from the boost-addicted, horsepower freaks at Hellion Power Systems, and it centers on a Turbonetics 64mm turbocharger. We've come to appreciate two things from Hellion horsepower and ease-of-installation and its Coyote 5.0L system continues with both of those goals.

From the moment this article took shape, we didn't stop hearing from John Urist, head designer and front man at Hellion. He kept updating us with results from Hellion's own test car as it unleashed 550 rwhp effortlessly, through an automatic no less. Our MSD test car was also equipped with the factory supplied 6R80 six-speed auto, so we expected similar results.

Urist offered insight to the task that lay ahead of us: Turbocharging a Coyote 5.0L has its advantages, like durability. So far, it seems a lot better than the Three-Valve engines. The efficiency of the engine allowed us to increase the size of the standard turbo to a Turbonetics HP64, which has a billet impeller. We normally run a 62mm turbo with a cast impeller, but this engine runs great with the HP64.

The billet impeller turbo huffs a mere 6 psi into the engine out-of-the-box, but Urist says the turbo is capable of supplying up to 25 psi. He also informed us the kit is capable of accepting up to a 76mm turbo from a variety of manufacturers, which can be purchased through Hellion. Certain 76mm units will bring output to the 850-rwhp range.

Of course, there are those who require a bit more than 850 rwhp, and Urist says the turbo mounting area is large enough for a mid-frame turbo up to a 91mm unit, like a Turbonetics Y2K turbocharger. Hellion will be releasing an adaptor kit later this year for those looking to add the mid-frame turbo to the standard 5.0L kit.

A turbo system is more than just a turbocharger opening the box revealed over 100 parts, proving the point. There was the usual assortment of nuts, bolts, clamps, and hoses, but we went immediately to the glamorous parts. Our greasy paws grabbed the pipes; every hot and cold piece is made from stainless steel. The downpipe starts at a stout 3.5-inches and is finally split into a pair of 3-inch exhaust pipes that drop down to 2.75-inches in order to mate with the stock axle-back exhaust. We wanted to offer the highest flowing exhaust on the market, as well as the scavenging effects of the step from single 3.5-inch downpipe to the dual 3-inches, proclaims Urist.

Like the turbo, the intercooler core is the largest one of any standard Hellion system on the market. The Hellion intercooler core measures 24-inces wide, 7-inches tall, and 3.5-inches thick. The kit includes 47-lb/hr fuel injectors standard, but larger fuel injector sizing is available. An SCT X3 handheld tuner is included in the base system, but we turned to Dave Rochau of Motiva Performance for a custom tune. Rochau was responsible for the tuning on the Hellion test car and we wanted the same results with the MSD vehicle. 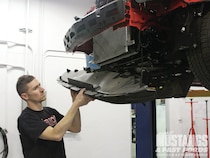 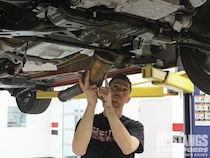 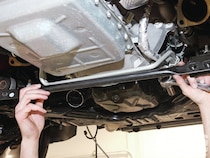 The engine tune was easy--it was actually the transmission functions that needed most of the attention. Rochau offered some insight into tuning the MSD Mustang. "The 2011 5.0L Mustangs have wide-band O2 sensors in the front location, which is really cool because you can go into the computer and command an air/fuel ratio at WOT. But in a turbo application, you don't command the same air/fuel ratio as you would in an N/A or supercharger because the sensors see increased backpressure due to the turbos. You have to make sure the MAF functions are right on par in order to effectively use the wide-band O2 capabilities."

The Mustang was tested on MSDs in-house chassis dyno, a SuperFlow unit that reads similar to a DynoJet eddy-current chassis dyno. The initial dyno runs were made with the front fascia off the car, and according to Urist, they've tested the system with and without the cover only to find no change in power. Our speculation is that since the boost is limited to just 6 psi it didn't matter. The turbo will work harder to achieve that same 6 psi with the front fascia on.

After some initial runs, we ran into one problem. The MAF sensor was maxed out despite a 4-inch-diameter sampling pipe. Urist worked with Pro-M to get one of the first MAF sensors designed for use on the 2011 Mustang 5.0L. The Pro-M Wave MAF sensor is frequency-based and can be used in all '11-and-up Ford products. It supports anywhere from 800 flywheel horsepower to 1,400 depending on the diameter of the tube.

The larger capacity MAF sensor solved the problem, and Rochau and Urist were back on the dyno looking for maximum power out of the base Hellion kit. This time the nose was back on the car for final chassis dyno-testing. The boost was fixed at 6 psi and the automatic-equipped Mustang unleashed a best of 552 rwhp and 605 lb-ft of torque at the wheels. That was through the factory 6R80 automatic and on pump gas.

The car continued to impress us on the street as it pulls cleanly and nicely when jumping on the pedal. We were even impressed with how quickly the 64mm turbo spools and generates boost--no lag in this combination. Unfortunately we didn't get any track numbers, but we think it's capable of pushing the car into the 10s with ease on slicks or drag radials.

"This system is the ultimate solution to adding horsepower to a 2011 Mustang GT because we can adjust the boost from 6 to 25 psi without changing any parts on the kit," says Urist. "It doesn't need any extras to make more power. All you need is the base system--no need to change exhaust, pulleys, throttle bodies, or anything else. When you want more power, just turn up the boost."

The car we sampled was an auto-equipped ride; Urist sent us info on a Hellion-powered six-speed manual car. The 2011 Mustang GT was equipped with a ball-bearing Turbonetics HP64 turbo just like the one we covered on these pages. Naturally the manual transmission netted more horsepower at the tires, and it spun a DynoJet chassis dyno to an impressive 640 rwhp and 748 lb-ft of torque. Boost was the same 6 psi, and Dave Rochau of Motiva Performance handled the custom ECU tune using SCT software.