We hit the strip with our 2011 AMSOIL Mustang GT. 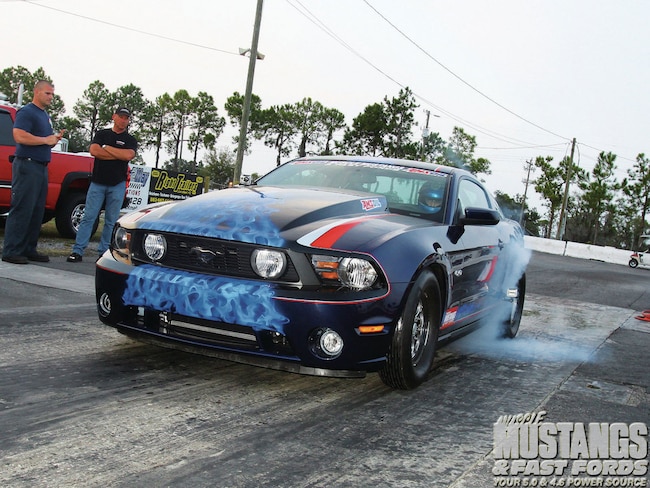 If you've been following our 2011 AMSOIL Mustang, which was built for the 2010 SEMA show, you're probably ready for a little payoff. SEMA is long over, and we have spent the last few months showing you what it took to take our 2011 Mustang GT from mild to wild. With the initial build complete, it was time to hit the track. Now before we get to the results, note that this is not the end of this Pony's tale--in fact, it's more of a new beginning. With the groundwork laid for big power and ultra-quick track times, we will spend a large amount of time throwing parts at it to push the performance envelope in future issues.

MM&FF's 2011 AMSOIL Mustang GT took shape very quickly. The "all-hands" approach to building the car resulted in an amazing seven-week assembly from stock to SEMA-ready. The downside to building a project so quickly is not having the time to test every component individually. Prior to the track-testing done in this story, the only real driving was on the trip home from Detroit. From there, it was moved in and out of the shop until it was completed; at that point, it was loaded up on trailers and shipped to different destinations as a show piece. With the show schedule on the back burner, it's time to get back to what we're best at--hardcore track tests! 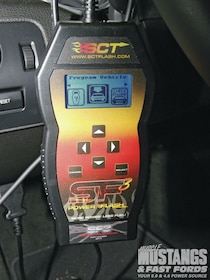 With a track day scheduled, we called Chris Johnson of SCT to take care a few tuning issues with our AMSOIL GT. Until this point, we left the power production on the conservative side. With Johnson back in our Snap-on Tech Center, we looked at the current tune and made a few changes. The first order of business was the 6R80 automatic transmission, so we took to the streets of Tampa. After clocking a few miles and a couple full-throttle passes, the transmission shifted perfectly into every gear. Once we returned to the shop, we strapped our Pony to our DynoJet. With power on the mind, Johnson made some changes to the tune, namely the variable cam timing. When all was said and done out supercharged 5.0-liter cranked out 539 rwhp and 452 lb-ft of torque. Happy with our results, it was time to hit the track.

Our day at the track started like most other test days for the MM&FF staff. The trailer, tools, and extra tires were loaded the night before and were set for the 2.5-hour haul to Gainesville Raceway. When we rolled out of our Tampa headquarters at 6:30 a.m., the skies looked promising. The further north we drove, the cooler the outside temperature became, and the excitement rose as thoughts of great air and big power filled our collective minds. Unfortunately, not long after exiting the highway we were blanketed with dark skies--finally, torrential rain ended our test session before it began.

Discouraged, but not broken, we headed back to Tampa where we regrouped. The sky actually was clearing out so we decided to head south to Bradenton Motorsports Park, which is just 45 minutes from the office. When we arrived, we were pleasantly surprised to see about a dozen NHRA Pro Stockers testing. We quickly unloaded the AMSOIL Mustang and made the final preparations for its maiden voyage down the 1,320. 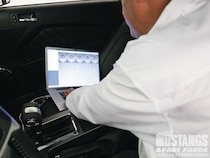 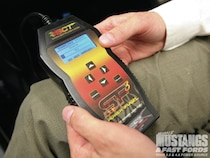 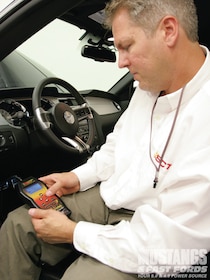 After loading the most current tune into the Copperhead ECU, Editor Smith climbed behind the wheel and adjusted the Corbeau seat. Once strapped in, he rolled into the burnout box and heated the Nitto drag radials. Once staged, Smith brought the rpm up in an attempt to get aggressive on the launch--unfortunately the stock converter had other plans.

At only 1,300 or 1,400 rpm, the car began to overpower the front brakes. The low rpm at the hit of the throttle resulted in a doggy launch and a soft mid-1.70 60-foot time. As the car motored down track, it softly shifted into each gear, crossing the finish line in 11.36-seconds at 123 mph. "The stock converter prevented the engine from revving quickly for a good launch. It really held the car back. The 3.15 rear gear wasn't helping either, especially with the taller-than-stock rear tires," says Smith. "With those parts changed, it will leave like a rocket." While we knew there was more potential, running low 11s with a brand-new car was satisfying.

After giving the engine and supercharger some time to cool, Smith headed back to the lanes and the results were nearly identical with an e.t. of 11.35-seconds at 123 mph. For the third run, Smith left off idle rather than powerbraking. The converter flashed and the rear hides dug in. This pass yielded an improved launch (1.71 60-foot) and an e.t. of 11.22 seconds at 124 mph, our best run of the night. All in all, it was a successful first outing for the MM&FF AMSOIL 2011 Mustang GT. We jumped past the 12s and went right to low 11-seconds e.t.'s with only an FRPP supercharger, full exhaust from Kook's, and SCT tune to increase power. Now, it's time to dig into the transmission functions, change the rearend gear and torque converter, and get into the 10s. 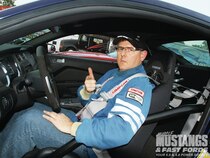 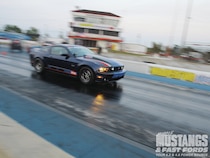 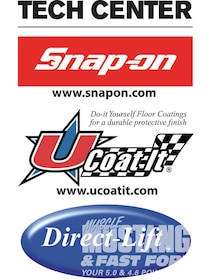