Part 4: The numbers are in—we tally our expenses and hit the strip with our 347 stroker in our SSP coupe. 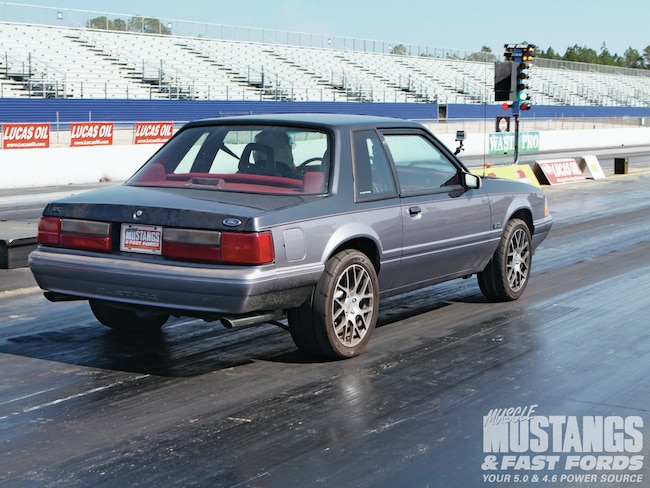 It's easy for us to sit behind a keyboard and tell you which parts you should buy for your project car, coupled with fancy rhetoric like "budget-friendly" and "on the cheap." But let's face it--most of the time, you get what you pay for. So when we tackled this 347ci engine build, we did all we could to cut costs without sacrificing quality or reliability.

For starters, we skipped the machine work and bought a remanufactured stock block from Summit Racing Equipment. Machined, painted, and ready to go, this thing makes a stroker project just as easy as a basic rebuild. We added a Scat rotating assembly, and ended up with a 347 short-block for under $1,600. We realize that it's still a stock block with a cast crank, but with our plans for this daily driver, it will be plenty stout.

Next, we sent our Edelbrock E-Street cylinder heads to Fox Lake Power Products. There, owner Ron Robart treated them with a full CNC-porting treatment. He also upgraded our exhaust valves to 2.02-inch, and installed upgraded springs and hardware. Flowing almost 300 cfm at 0.600-inch lift, the now-200cc heads are ideal for our new displacement. Robart also port-matched the runners of our lower intake. 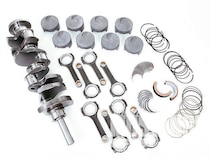 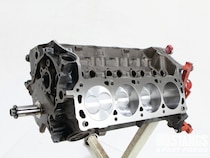 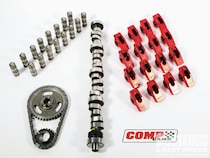 With the main features decided, we needed to upgrade the fuel and intake systems to match. We tossed the stock 19-lb/hr injectors for a set of FRPP squirters from Summit Racing Equipment, and a complementary 76mm mass air meter so calibrated from BBK Performance. Since we were already rockin' a 255-lph pump, we left the fuel system at that. On the induction side, after some testing, we settled on a 75mm throttle body and spacer, also from Summit. Some additional porting of the intake was necessary, but was accomplished with simple power tools.

Since the imbalance of our new rotating assembly is 28-ounce, our 50-ounce balancer and flexplate had to go. We went with an FRPP balancer from Summit, and a new Xtreme series flexplate from Performance Automatic. We also added a set of underdrive pulleys by March Performance and FRPP hoses, wires, cap, and rotor--also from Summit Racing.

Once installed, Chris Johnson of SCT Performance came to help us tune the new combination. Though you could learn to do this yourself, it's much quicker to have a trained professional tune your car. If you buy the Advantage III custom tuning software from SCT, you can tune yourself. But verifying your results without a chassis dyno would make writing your own tunes a nightmare. And it's always possible to do more harm than good when tackling such a chore. 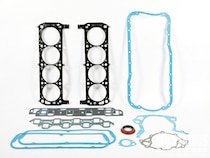 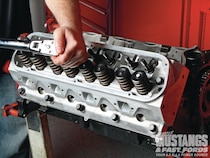 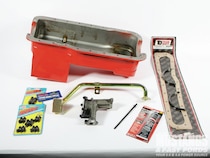 In the end, we made 353 rwhp and 346 lb-ft of torque through our AOD. Though not as much torque, power output was equal to that which we made on the 125-shot of juice with the old combination. On the street, our 347 is an animal. The power band doesn't feel peaky, and power application is instant and thrilling. The real test, though, would be on the dragstrip.

To support the theme, we opted to not trailer the coupe the 125 miles to Gainesville Raceway. Instead, we made the two-hour trip under the power of our newly built engine. With only about 500 miles on the clock since the install, an oil change and nitrous bottle fill was all we needed before setting out on the journey. Since our wheel/tire/suspension upgrade, trips to the track are simple, with little-to-no preparation. Your author's RaceQuip helmet lives on the back floorboard, and the tire pressure gauge stays in the glovebox--let's just say that we're track-ready. 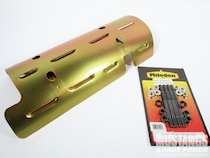 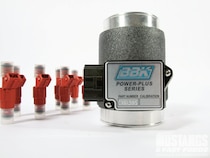 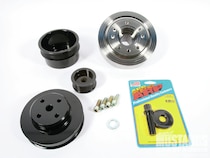 Though we're not legal to run quicker than 11.50, we opened the nitrous bottle and headed back to the staging lanes. Since we had an issue with tire spin naturally aspirated, the juice certainly wasn't going to help matters. Still, we gave it a shot. A soft 2,000-rpm launch permitted a (spinning) 1.90 60-foot. After lifting and reapplying the throttle two times, both resulting in tire spin, we aborted the run.

In the end, we're still happy. We built a complete do-it-yourself 347 for under $7,000 in our own shop that is daily driven and runs 11s without even a tire change. That being the case, we'll probably just leave the juice at home.

For behind-the-scenes photos and video of the build and track test, go to www.musclemustangfastfords.com. 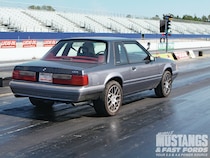