At MM&FF, we just love it when a manufacturer hands us parts and tells us to go beat the living snot out of 'em. Not that we're especially abusive here, but we know our readers love nothing more than to see some big, fatty power numbers. In short, this was the perfect opportunity to subject a new block, rotating assembly, and ported cylinder heads offered by ProComp Electronics to the rigors of the dyno. Given the author's affinity for all things forced induction, what better way to demonstrate the strength of the new components than by combining big displacement with boost to create a pressurized power plant?

Rather than take the usual route of supercharging an EFI motor, we decided to combine a turbocharger with carburetion. Though certainly not a low-buck approach, the use of a carburetor and conventional distributor demonstrates an effective alternative to a factory or standalone EFI engine management system. The carbureted combination also allows us to effectively stress test the new block, crank, and even the cylinder heads, as we will settle for nothing less than an honest 1,000 hp!

The first step was to have the new block properly machined. The ProComp block was taken to L&R Automotive. Our 351W block featured a 4.125-inch bore size, which we combined with a 4.10-inch crank to produce a finished displacement of 438 ci. The block was honed and all the critical elements checked prior to assembly. The only oddity during the process was that the main bolts featured metric heads but standard threads. They can easily be replaced with ARP hardware, but we ran them as delivered.

The block was plenty beefy and featured splayed four-bolt main caps, and thick decks and cylinder walls. Basically it was everything the stock 5.0L and 351 Windsor blocks are not. Having split stock blocks in half from excessive power, having a solid foundation is a must when probing the 1,000hp mark.

In addition to the block, ProComp also supplied a 4340 forged steel crank and matching 6.20-inch connecting rods. The long rods were needed to clear the equally lengthy 4.10-inch stroke. To these we added forged (dished) pistons from Probe Racing to complete the 9.2:1 rotating assembly.

Given their extensive lineup of components, ProComp was happy to supply its CNC-ported cylinder heads. We tested a set of these heads previously in MM&FF on a 408 stroker with good success, so we knew they had potential.

When it comes to making big power with a turbo or blower, the key is to start with a powerful normally aspirated combination. Wanting to maximize the power output of the motor prior to the application of boost, we sent the CNC-ported ProComp heads to the flow wizards over at Dr. J's. Dr. J's has extensive experience with the ProComp Ford heads, and took our already-good heads and made them better.

According to Dr. J's, the valve job is a critical upgrade to the ProComp heads. In addition, Dr. J's performed some minor porting and blending to finalize the castings. They can perform the same work to the as-cast heads, but the level of porting is much more extensive to reach the 300-plus-cfm mark.

When all was said and done, the heads flowed 321 cfm on the intake and 247 cfm on the exhaust at 0.800 lift. The ported heads were secured using 1/2-inch ARP head studs and Fel Pro MLS head gaskets designed for our 4.125 bore.

With one of the three major power producers taken care of, we turned our attention to the cam and intake manifold. Given the displacement and intended power level, we chose a single-plane intake. As luck would have it, Dr. J's had an Edelbrock Super Victor that was all ported and matched to the ProComp heads. Since we were running a carburetor, the ported Super Victor seemed like the perfect choice.

Proper cam timing for our boosted stroker was provided by the Ford cam experts at Cam Research Corp. Having had such good success in the past, we were anxious to see the cam specs for our turbo stroker.

Cam Research supplied what we thought was a pretty mild profile, at least in terms of duration. Taking full advantage of our high-flowing heads, the solid roller cam supplied for our 438 checked in with a healthy 0.736/0.727 lift split, a 254/252 duration split, and a boost-friendly 112-degree lobe separation.

Though the 254/252 duration split seemed tame, the results were nothing short of amazing, both normally aspirated and turbocharged. The Cam Research Corp cam was combined with roller lifters, a double-roller timing chain, and hardened pushrods, all from Comp Cams. The final touch of valve train hardware was a set of 1.7-ratio gold roller rockers. 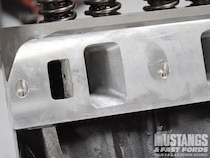 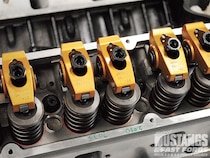 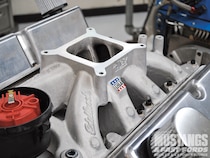 Demonstrating the torquey nature of stroker motors was the fact that the 438 offered no less than 510 lb-ft from 3,500 rpm to 6,200 rpm. Making this all the more impressive, the power numbers came from a combination featuring a blower/turbo cam and a static compression ratio of just 9.2:1. Were we to build this motor as a dedicated normally aspirated combination, we'd up the compression with flat-top pistons (to replace the 29cc dish units), have Cam Research Corp do a wilder cam with a tighter lobe separation and more duration, and install 17/8-inch or even 2-inch step headers. Keeping the compression and cam timing at boost-friendly levels meant we were now free to install the turbo.

Since we just tested a 302 with the turbo kit from HP Performance in Roswell, New Mexico, selecting a turbo kit for the 438 stroker was as simple as pulling it off the previous test motor. The slip-fit cross-over tube allowed the turbo kit to fit both 302 and wider 351 applications. The kit from HP featured dedicated, tubular exhaust manifolds with V-band clamps, a front-mounted air-to-air intercooler, and Jet-Hot coated tubing. Though designed for a fuel-injected 5.0L (or 5.8L), the kit worked perfectly on our carbureted stroker application with just a few minor upgrades.

The first component in the line of upgrades was obviously the carburetor itself. Our blow-through (works on both supercharged and turbocharged applications) carburetor came from Carburetor Solutions Unlimited (CSU). The CSU carburetors are machined and tuned specifically for use on blow-through applications, providing precise metering under all normally aspirated and boosted conditions, including transitions.

Having had such success in the past with the CSU carburetors on supercharged motors, we were anxious to give this one a try on our turbocharged stroker. It is easy to tune a blow-through carburetor to either run well at full throttle or under cruise conditions, but CSU has mastered both. A small section of tubing was necessary to connect the discharge tube from the intercooler to the CSU carburetor bonnet.

As indicated previously, the turbo kit was originally used on a milder 302 application. Though we managed to exceed 600 hp with the supplied turbo, an upgrade was in order, but not before we swapped out the 44mm Tial wastegate. Apparently, the 44mm wastegate was too small to properly control the boost pressure supplied by the Comp Turbo-boost creep resulted in an escalating boost curve.

Coming to our rescue were the guys from Turbo Smart in the form of a 45mm Hyper-Gate. According to Turbo Smart, the 45mm Hyper-Gate offers a 20 percent increase in flow over the smaller 44mm wastegate. Installation of the Hyper-Gate cured the rising boost curve and provided complete boost control. A manual boost controller was used to bleed the pressure signal to the wastegate, thus allowing us to adjust the boost pressure from 7 psi (the wastegate spring setting) to over 15 psi (or more with a spring upgrade).

The final upgrade was the turbo itself. Comp Turbo supplied a 74mm turbo for our stroker. The 74mm was a slick piece of equipment, featuring a billet center section plumbed for water-cooling, though we didn't run it in this configuration. Externally, it didn't look much bigger than the 60mm run on our 600hp 302, but boy did it flow like a bigger unit. Using the 74mm turbo, we were able to exceed 950 hp, but it wasn't quite large enough to reach 1,000 hp. A quick phone call and trip to Comp Turbo resulted in an upgrade to an 80mm impeller and housing. Using this new configuration, we were able to not only reach 1,000 hp, but exceed it by producing peak numbers of 1,037 hp at 6,000 rpm and 957 lb-ft of torque at 5,100 rpm. Torque production actually exceeded 900 lb-ft from 4,500 rpm to 6,000 rpm.

With minor jetting, the CSU carburetor provided a safe air/fuel mixture below 12.0:1, while the total timing was kept conservative at just 21 degrees. Combining the air-to-air intercooler and cooling from the fuel supplied by the carburetor resulted in an ultra safe combination that could easily run on pump gas (we ran ours on race fuel to be safe).

Despite the stress, the ProComp block, rotating assembly, and heads impressed us with the ability to support these extreme power levels.