How To Convert Your Speed Density Mustang To Mass Airflow.

In 1986, Ford replaced the tried and true four-barrel carburetion setup with a sequential multiple-port fuel injection system. This new EFI-equipped 302 scared the heck out of many Mustang enthusiasts, but offered improved driveability, fuel mileage, and smooth performance. And while Ford hadn't quite worked the bugs out for hot rodders wanting to bolt on intake manifolds, heads, and some lumpy cams, the future would eventually be bright for EFI.

After some searching, I came across Fiveology Racing (fiveologyracing.com). I spoke with Brian Bastob about the MAF conversion and ultimately my near future plans for the GT. Fiveology offers three conversion kits for varying performance needs, and Brian can put together a MAF conversion kit tailored specifically for the 5.0 Mustang. I also upgraded to a 70mm throttle body and EGR spacer, so Brian set me up accordingly. The kit is complete with everything you'll need minus the throttle body and EGR spacer. Brian is also knowledgeable about this conversion and was helpful with our tech questions.

Any radical modifications made to the speed density engine causes the said system to go "full tilt" (in pinball or poker terms) because the load/fuel mixture tables are inflexibly burned into the processor. If you exceed these parameters by installing a cam that's too big, or an induction that flows too much, then the system can no longer effectively compute injector pulse width (fuel/air ratio) and timing. The net result is a loss of driveability, an overly rich condition, or in extreme cases, engine failure due to detonation caused by lean mixtures and/or over-advanced timing.

Like most 5.0L fanatics, your author just can't leave it stock. I already have a pretty wicked '85 Mustang LX Coupe getting ready to be reassembled and I bought this particular '88 GT to be used as a daily driver. A promise to my wife to leave it stock turned into "it's just a couple of modifications, honey..." Married guys with Mustangs, you know the look that follows!

I knew that my '88 GT was a speed density car when I bought it, but now that I've started modifying it, I can't stop. I also know that before you can add any real performance modifications beyond cold-air intakes, gears, and exhaust on a '86-'88 speed-density-equipped 5.0L Mustang, you have to convert to mass airflow.

So here we are doing a mass air conversion on my Mustang. But first let's take a look at the difference between speed density and mass airflow.

Here is the engine in speed density form.

Once the MAF is installed, you can see a clear difference in the inlet tract.

With mass airflow, the air entering the engine is actually measured using a mass airflow (MAF) sensor. Injector pulse width is still calculated in the same manner as shown previously, however, now the airflow is actually measured instead of calculated. In a sense, things happen before the fact, rather than after the fact. The big advantage of a MAF system is that you can change things on the engine that affect airflow and maintain driveability. In most cases, the MAF sensor will realize the change in airflow, and the fueling will still be correct. It makes the MAF system the most forgiving for engine modifications.

The first thing I did before buying any parts for my conversion was to do research. I decided I didn't want to waste time trying to scrounge parts from various salvage yards and hope I had everything I needed to complete my conversion.

'86-'88 Mass Air Conversion Installation
Once I had all my parts together, I drove the Mustang to Scatts Automotive, where John Scatterday performed most of the mass airflow conversion. We decided to disassemble the mechanical components before getting started on the wiring harness and EEC.

If you decide to use your stock throttle body, EGR spacer, and injectors, you can skip right over this section and move on to the mass airflow sensor wiring harness installation. Make certain to disconnect your battery first. 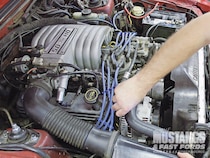 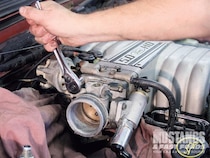 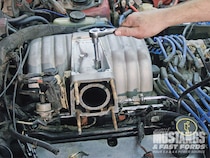 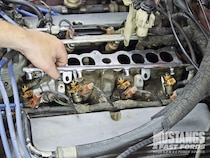 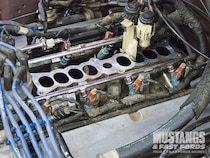 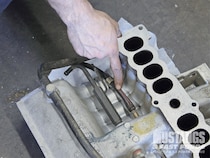 Mass AirFlow Wire Harness Wire Callouts
Red Wire-VPWR (Main Power) This wire must be spliced into pin 37 or 57 on the 60-pin main connector.

Black Wire-PWR GND (Main Ground) This wire must be spliced into pin 40 or 60 on the 60-pin main connector.

Green Wire-MAF RTN (Signal Ground)This wire/terminal must be inserted into location 9 on the 60-pin main connector.

White Wire-MAF RTN (Signal) This wire/terminal must be inserted into location 50 on the 60-pin main connector.

Time to fire it up!
Double check all wiring and everything in the engine compartment again before starting the vehicle. Before we buttoned everything up in the interior, we wanted to start the car to see how it runs, and if there were any issues that needed to be addressed.

Please note that it is normal for the idle to be a little rough, and you may notice some slight surging while driving until the EEC relearns it's fuel curves. A couple hours will soon result in smooth driving.

We turned the key and the '88 GT fired right up! We were pleasantly surprised at how smooth the engine idled and we noticed a big difference in throttle response.

Once everything checked out OK, we slid the new EEC and wiring into place. Next, we installed the bolt for the EEC retaining bracket, and bolted down the ground wire and relay that were removed to get the old EEC out. After replacing both kick panels and scuff plates, we then replaced the driver's seat and any other trim pieces we had removed.

Wiring Note (see next eight photos): Some pre-'89 vehicles may require three black wires. If there are no terminals in the pin holes listed, you will need to add these wires. If your car doesn't have cruise control, you may have to add the speed sensor in the transmission. You'll need the speed sensor, an electrical connector, and a new speedometer cable. These should be available from your local Ford dealer. Some consider these three wires optional, but to avoid any issues with poor vehicle performance and/or EEC error codes, it is recommended that you install them.

Nitrous: How to Add Tire-Frying Performance for Under $600!

We transformed the Cobra for under $600 and gave its heart a shot of adrenaline. Check out how we added tire-frying performance using a ZEX nitrous kit!