Underneath The Shake Is A Surprise That Whines With Pleasure.

Michael Galimi
August 1, 2009
A little shake and a lot of roll is courtesy of the Saleen Speedlab Super Shaker blower system.

In 2003, Ford brought back a familiar character in the Mustang story as the Mach 1 was reborn in the New Edge style. While many hardcore enthusiasts focused on the potent Four-Valve modular engine, it was the styling cues that helped elevate its status in the brand's folklore--specifically, the functional Shaker hood. It was the first time Ford utilized the famous old-school Mustang Shaker hoodscoop on a modern Mustang. Not only did the scoop shake when the buzzing 4.6L was fired up, it allowed fresh air to be rammed into the intake tract.

Moving forward, the Shaker hoodscoop reappeared four years later when Saleen introduced the Parnelli Jones edition Saleen Mustang. The slick car came equipped with a Three-Valve stroker engine that packed plenty of punch, and the Shaker was a sweet touch of style and performance. It was the popularity of the Parnelli Jones edition that prompted Saleen Speedlab (the speed parts division of Saleen) to explore the possibilities of building a Shaker system for its Series IV twin-screw blower, one of its most popular aftermarket parts. Last summer the company released the Super Shaker, and it combines the two popular notions of a Shaker ram-air kit and a twin-screw blower.

Twin-screw blowers are no secret to the Mustang crowd, having been around for a long time. Thanks to the Terminator Cobra ('03-'04), the twin-screw blower craze continues to thrive today. Blower companies have adapted it to the Three-Valve engine, which responds just as well to the boost as the other modular engines in the Ford lineup. We decided to get a closer look at the unique Super Shaker supercharger system.

This isn't the first twin-screw blower we've installed, but it's certainly the most intriguing given its Shaker status. The simple hoodscoop goes a long way in the retro-look department, and the supercharger goes further in upgrading the performance. 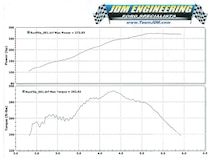 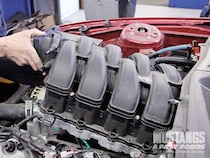 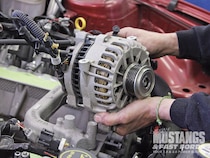 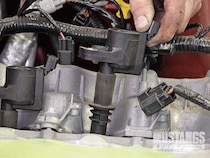 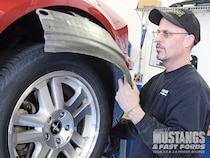 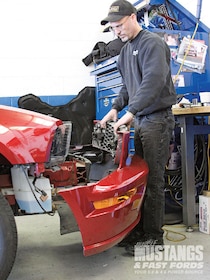 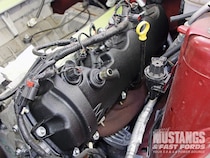 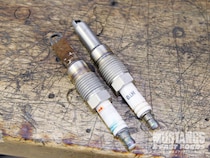 The Saleen kit was designed around an '05-'06 Mustang GT, if you have an '07-newer ride then you will have to install this thermostat housing and reroute the radiator hoses. The good news is that Saleen includes the three hoses and housing for the thermostat relocation.

Our test vehicle is an '07 Mustang GT that belongs to Editor Smitty and his wife, Diane. The Saleen Super Shaker was a perfect fit for this performance-oriented couple; Diane wanted a Shaker hood, while Evan wanted to add a supercharger to their hot rod. The blower fits the bill for both of their desires.

We ventured to JDM Engineering, one of Saleen's leading distributors, to follow the two-day install of the blower, slicing and dicing of the hood, and subsequent dyno-testing and custom-tuning by JDM proprietor Jim D'Amore. Installation was straightforward for the supercharger system--it's the cutting of the hood that we would rather leave to the professionals. The thought of cutting into a perfect hood had us cringing, but the JDM crew is well-versed in the practice and they didn't hesitate. In all, it took approximately 14 hours for the complete the installation (sans dyno time). JDM upgraded a few odds and ends with better lines and new hose clamps. Naturally, a custom JDM tune was installed in the ECU using an SCT programmer.

The results are impressive and exactly what we expected from the virtually out-of-the-box installation. Some might be looking for this combo to make ridiculous power, allowing us to go ZR1 hunting. But the truth is, we wanted to show off the system as it comes from Saleen. Cranking timing and adding a smaller blower pulley, race fuel, and a larger fuel system is a story for another day. The fuel system remains stock, without the aid of the popular twin GT500 pump combo. "Since we are installing this supercharger out of the box, the power will be limited to about 440 rwhp," comments D'Amore. The 440-rwhp output is the limit of the stock fuel pump without jumping the voltage with something like a Boost-A-Pump box. Our kit came with 39-pound fuel injectors, which are plenty for a combination like this.

The belt is wrapped around all of the accessories and is ready for the alternator to be bolted on.

Outside of the kit, the car is bone-stock including the torque converter (it is equipped with an automatic), rear gears, and exhaust system. The car produced a very average output of 272 rwhp and 293 rwtq in stock form. According to D'Amore, that is in the middle of what he has seen from automatic-equipped S197 GT cars. The new blower provided a rather mild 7.5 to 8 psi of boost to the zippy Three-Valve mod motor. The Dynojet chassis dyno is setup to record boost, and D'Amore reported a spike to 10 psi in the higher rpm range. He attributed it to the restrictive stock exhaust system. The boost effectively brought output at the rear tires to 432 rwhp and 408 rwtq. D'Amore dialed in a conservative air/fuel ratio and low timing levels, which will provide Diane with trouble-free cruising on the streets.

In a post dyno-test report, Smitty informs us that the fuel economy is virtually identical to its stock mpg results, which is in the 20- to 24-mpg range depending on driving conditions. He notes that the car drives similar when he is light on the throttle.

Smitty is also happy to report that the shaking hoodscoop never gets old. Each morning, the scoop gives a little wiggle as the throaty V-8 roars to life. He did mention that it's hard to resist laying into the throttle when getting on the highway. The car screams to life when he puts his foot in the throttle, and the transmission shifts the gears firmly. The high-pitched whine and tire smoke that ensues makes for a fun commute--that's if he can pry the keys away from his wife.