Quell Those Rampant Underhood Temperatures Before They Cook Something Valuable.

We all love the sound of a new exhaust system, the thump of a hot camshaft, and the thrust of added torque, but all too often we ignore those sub systems that our hot rods depend on to get from point A to point B. These "other" things include suspension, brakes, and your cooling system. It's this last little detail that we're going to address on our project Recession Special.

The aftermarket makes some great upgrades for your Fox-body Mustang, and they'll definitely get the job done in regard to keeping your Horse cool under the hood. After hearing about a sweet boneyard electric fan upgrade, we had to try it ourselves.

The dual electric fan we ordered from Rusty Acres comes right from the '95-'00 V-6 Ford Contour. It covers nearly every bit of the Fox-body radiator and pulls a ton of air for optimum cooling.

Rumor from a good friend of ours was that the Ford Contour had a great dual-electric fan setup and that it was damn near a drop-in for the Fox-Mustang platform. Electric fans have always been a good upgrade for the Fox-body Mustangs as they work more efficiently than the factory clutch fan setup, and the reduced engine drag usually frees up a few ponies. We like anything that offers up free power, so we got the ball moving.

We called Rusty Acres auto salvage in Jacksonville, Florida, for the lowdown and, according to the sales staff, the dual-electric fan that we wanted was available on all V-6 Contours from 1995 through 2000. Six-cylinder '99-'02 Mercury Cougars and Mystiques also utilize the same fan. Some four-cylinder models did feature the dual-fan, but most were supplied with the single unit.

A thermostatically controlled electric fan is the best way to keep your Colt cool. Flex-A-Lite has a number of fan controllers to suit your every need. The one we chose is the most basic, but it gets the job done.

Our efforts to find concrete technical specifications on the Contour fan have come up short. Internet lore says 3,600 cfm at 30 amps, and we did find an extremely similar fan for sale that offered up 3,400 cfm. All we know is that it takes all of 30-40 seconds for the fan to cool the coolant to its preset temperature. We also have to think that the increased airflow improves the efficiency of our front-mount intercooler as well, at least when it's running.

We've heard of prices as low as $40 for used units from the local pick-n-pull to upwards of $180 for new setups. Rusty Acres normally sells the double fan for $100, which fits our tight budget restraints. As we found out while mocking it up against the radiator in Project Recession Special, it's just about a perfect fit. It's slim, too, and we confirmed with our rumor source that it easily clears an 8- or 10-rib supercharger pulley, even when mounted to a large aftermarket radiator.

The Flex-A-Lite fan controller fit perfectly into this recess on the fan shroud.

If you wire the electric fan to a key-on power source, there's a good chance that your car will never heat up. This can cause a number of problems, not the least of which is frozen occupants in the winter and a computer that never sees closed-loop operation. That being said, we sniffed around the Summit Racing website for a thermostat control and found the Flex-A-Lite PN 31147 temperature control unit. It retails for $26.95 and is just what we need to make sure the engine operates consistently at a given temperature.

For wiring, we used a T-tap connector to pick up the key-on positive signal from the coolant overflow sensor harness and connected that to the key-on source on the temperature control unit. From there, we ran a wire to the 40-amp relay and its switch terminal (86 pin). The relay was then grounded on the 85 pin and a 12-volt constant power source was fitted to the 30 pin. The positive 12-volt output (87 pin) was then connected to the electric fan positive leads. 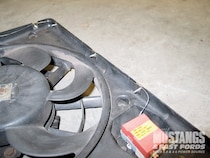 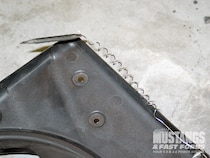 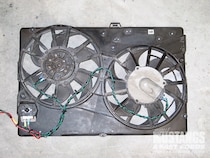 To get a 12-volt key-on positive source, we used a T-tap connector to pick up the signal from the coolant level sensor.

In using the Contour electric fan, we weren't able to reuse the stock overflow tank, so we called on Summit Racing and ordered one of its aluminum overflow tanks (PN 300100) for $35.95. It's a very nice piece that holds 20 ounces of fluid. The kit comes with a petcock and a 90-degree elbow, but to work on our application, we shelved the petcock and installed a brass nipple for a vent. This ensures the coolant can push into the tank if needed, and it can pull the coolant back as well.

Luckily for us, Recession Special had already been upgraded in the radiator department with a three-core unit. It might be an old Ford Racing piece, but we couldn't confirm its origin. It definitely has a few miles on it, so we may take it to a local radiator shop and have it cleaned out.

We mounted the wiring relay high on the fan shroud with a simple nut and bolt.

The last part of our cooling equation comes from Thermotec Automotive Products. Thermotec supplied us with one of the company's turbo insulating kits, which allows us to cover the turbocharger exhaust housing as well as the downpipe. With the exhaust housing mere inches away from some of the alternator wiring and AC lines, we thought it was a good idea to wrap it up. This process also helps the exhaust housing become more efficient, as keeping the heat inside helps spool the turbocharger faster. The kit is a cut-to-fit deal and comes with aluminized heat barrier for the turbo, along with some exhaust wrap for the downpipe.

Turbocharged and supercharged Fox-body Mustangs usually have problems with running hot, but if you've forked out the big loot for your power adder, this boneyard electric fan setup may just be the best way to keep your car and your wallet cool.