We Put The Top 4.6 Intakes To The Test In This Dyno Shootout.

Richard Holdener
December 1, 2007
Is this guy out of his mind trying to install a Weiand intake and Holley carburetor on this Cobra motor? The intake testing required a suitable test motor. In this case, our Cobra motor came not from Ford, but from Sean Hyland Motorsport in the form of its 405hp 4.6L.

In our last issue, we assembled a number of different 5.4 intake manifolds and compared them to the factory Navigator intake assembly on a modified 5.4L Four-Valve motor ("Factory Fast Vs. Advanced Aftermarket). Given the intended application-a heavy SUV or other truck-it's not surprising that the factory Navigator intake performed well at the lower engine speeds. Designed to enhance low-rpm torque production, the Navigator intake demonstrated its torque-producing nature by besting all other intakes up to 3,500 rpm.

Naturally, there's no free lunch, so an intake designed to enhance low-speed torque production will suffer higher in the rev range. Such is the trade-off inherent in any intake design, though this can be overcome, to some extent, with a dual-runner design like the Aviator and FR500 intakes tested on this 4.6L Cobra motor.

The reverse is also true, as short-runner intakes designed to enhance high-rpm power won't provide the same torque numbers as a long-runner design. It's all about efficient cylinder filling and where you want, or need, the engine to perform its best. For those who have forgotten already, this scenario holds true even on boosted applications.

Since last month, when we ran testing on a 5.4L motor, we decided to show some love to the 4.6L Cobra owners as well. As with the 5.4L, we gathered every Four-Valve intake we could get our hands on and ran them in a back-to-back test against the factory '01 Cobra manifold. Unlike the Navigator intake, the Cobra manifold wasn't designed to enhance low-speed torque production to help accelerate a heavy SUV. Instead, the Cobra manifold was designed to promote midrange torque and allow the motor to pull strongly to 6,500 rpm. Please, no letters about running your Cobra motor to 9,000 rpm or more-the Four-Valve motor will certainly spin that high, but the factory intake was designed to produce peak power well below that point. In fact, our modified test motor produced peak power at just 6,400 rpm with the '01 intake. With a few of the short-runner intakes, the power peak was shifted as high as 7,000 rpm, clearly demonstrating that the intake plays a major part in determining the shape of the power curve. 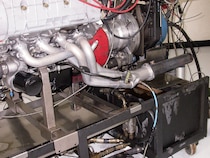 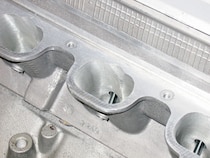 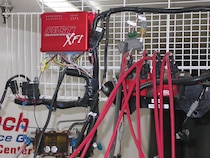 As has been our practice in the past, we've included complete power curves for each intake tested. The graphs are plotted against the factory '01 Cobra intake for comparison. As indicated previously, the factory Cobra intake was designed to maximize midrange torque production, and not one of the intakes tested managed to top the peak torque production of the factory piece. This tuned-for-torque design naturally left power to be found at the higher rpm ranges, something the FR500, Sullivan, and custom dual-plenum design took advantage of.

While the aftermarket intakes all produced more peak power, not one of them (including the author's adjustable design) did so without sacrificing power elsewhere along the curve.This is often the case with a good intake design, something the Cobra manifold can certainly be classified as. Along with the usual Four-Valve suspects, we also got the opportunity to test some adapter plates from Kar Kraft (yes, the guys who brought you the Boss 429) that allowed us to run any 5.0L intake manifold on the 4.6L Four-Valve motor. You'll remember that Kar Kraft also supplied a carbureted upper intake for the Navigator intake we tested on the 5.4L; we hope to run the dual-quad version on the 5.4L once it's ready.

In addition to the 5.0L to 4.6L adapter plates, Kar Kraft also offers an upper intake for the 4.6L Aviator manifold, although it was not available in time for testing. Check out the accompanying results and see how your favorite did, but remember, Ford put a lot of work into the factory Cobra intake, and these tests show the Blue Oval really did its homework.

4.6L Cobra Intake Test: Stock vs. Aviator
The Aviator intake featured a dual-runner system much like the FR500 intake. Judging by the peak power numbers alone, you might be tempted to think the stock Cobra motor offered only 10 hp over the Aviator, but this is why we go through the trouble of running these graphs that illustrate the entire power curve. Below 3,000 rpm, the Aviator actually held the edge, but from 3,700 rpm to 6,800 rpm, the factory Cobra intake offered some serious power gains. The dual-runner Aviator intake offered slightly better power for the next 200 rpm (to 7,000 rpm), but the impressive midrange torque offered by the Cobra manifold would make it the clear choice on this combination. That the Aviator will not fit under the stock hood is another possible deterrent to running it in place of the Cobra piece.

4.6L Cobra Intake Test: Stock vs. FR500
Like the Aviator intake, the FR500 featured a trick, dual-runner design that offered basically two intakes in one. Unfortunately, even the dual runners couldn't match the Cobra intake in the all-important midrange. Below 3,400 rpm, the short runners on the FR500 bettered the factory Cobra intake, but from 3,900 rpm to 6,500 rpm, it was all Cobra. Above 6,500 rpm, the FR500 pulled away thanks to the short secondary runners. For maximum effort motors that regularly exceed 7,000 rpm, the FR500 intake has something to offer, but like the Aviator-which is closer in power to the factory intake than the FR500-the FR500 is not ideally suited to a mild Cobra motor.

4.6L Cobra Intake Test:Stock vs. Sullivan Intake (with Elbow)
The Sullivan intake was run in three different configurations: two EFI and one carbureted. Isn't it ironic that the carbureted combination produced a higher peak power reading than any of the EFI configurations? The reason the carbureted combination produced the best power was the introduction of fuel into the intake well before the head ports (where it's injected in EFI configuration). The introduction of fuel actually helps reduce the intake charge temperature, which, in turn, helps improve power production. Since the Sullivan intake was basically a single-plane carbureted intake, it was only natural that it be run in carbureted form as well as with the elbow (the oval Accufab throttle body) and the four-hole throttle body. As indicated by the graph, the short-runner Sullivan intake produce exceptional power past 6,000 rpm-bettering the stock intake by nearly 50 hp at 7,000 rpm-but lost power from 3,000 rpm to 6,000 rpm.

4.6L Cobra Intake Test: Stock vs. Kar Kraft (Weiand and Holley)
On the scale of 1-10 for good ideas, this Kar Kraft adapter system rates a solid 10. To increase the number of intakes available for the 4.6L by one or even two is a relatively simple thing. To increase the number available by 10 or 20 with one simple setup is difficult indeed, though all it took was one great idea and some fancy machining. With all the intakes available for the 5.0L motors, why not make a set of adapters to allow use of all those intakes on the mod motor? Using the adapter plates from Kar Kraft, we installed a simple setup in the form of a Weiand Stealth intake and Holley 750 HP carburetor. Running the Stealth intake and 750 HP carb, the motor produced 382 hp and 332 lb-ft of torque.

4.6L Cobra Intake Test: Stock vs. Kar Kraft (TFS Box R)
Wanting to run a 5.0L EFI setup on the mod motor, we selected the Box R manifold system from Trick Flow. Having had such success recently on our 408 stroker motor, we decided to give the impressive Trick Flow combo the nod over the many available options. Like the Weiand carbureted system, the Trick Flow Box R lower intake bolted right to the Kar Kraft adapters using a set of Fel-Pro 1250 intake gaskets. The Trick Flow Box R intake assembly looked right at home on the mod motor, though a scoop would definitely be in order for use under the hood of a Cobra. Equipped with the Box R feeding the Kar Kraft adapter plates, the 4.6L produced 394 hp and 355 lb-ft of torque. The Kar Kraft adapters are indeed a great idea, but we'd like to see them open up the port dimensions of the adapters to match the larger 1262 gaskets to further increase the flow potential. After all, the Four-Valve heads flow substantially better than a set of stock 5.0L heads.

4.6L Cobra Intake Test:Stock vs. Custom Dual Plenum
The final intake tested on the modified Cobra motor was this adjustable, dual-plenum design whipped up by your author. Eagle-eyed readers will no doubt recognize it as the very one run on the 5.4L motor. How does one intake fit both the 4.6L and larger 5.4L motors? Isn't that like one intake fitting both the 302 and 351W motors? Actually, the Windsor scenario is pretty accurate, but the answer is quite simple. The base for this custom intake was built in two pieces, which allowed it to be run on either the 4.6L or larger 5.4L since there's nothing connecting the two halves that dictate a predetermined width. Like the manifold flanges, the runners and even plenums were separate, joined only by a (clamp-on) U-shaped junction at the rear. The adjustable nature of the manifold allowed us to run a variety of different configurations, which produced a variety of different power curves (and peaks). While we were able to produce as much as 436 hp (matching the carbureted Sullivan system), we selected a slightly longer runner length that produced a better overall torque curve. So equipped, the 4.6L produced 424 hp and 369 lb-ft of torque, bettering the stock intake from 5,500 rpm to 7,000 rpm. This combination matched the factory torque production from 3,000 rpm to 4,600 rpm, falling behind slightly to 550 rpm.