Richard Holdener
December 3, 2007
Since we were looking to exceed 400 hp with this 347 combination, we installed a set of Ford Racing Performance Parts Z304 aluminum cylinder heads, which are available fully assembled under PN M-6049-Z304DA.

This buildup started with a desire to run a test on one of Ford Racing Performance Parts' crate engines. Actually, we wanted a motor capable of running with the LT1- and LS1-powered Z28s of the world, and thought the 450hp 347 listed in the FRPP catalog looked like the perfect choice. Checking out the specs on the M-6007-C347 crate engine listed in the catalog and online, we see that the 5.0L crate motor was actually a 347 stroker in disguise. That's one of the great things about running a stroker-the ability to disguise it as a lesser combination. The 347 stroker looks identical to a standard 302, so who knows the difference?

How many street races have been won by strokers passed off as 302s? The M-6007-C347 crate motor had plenty to offer, including a Sportsman block, a stroker crank, and even a Canton oil pan. Unfortunately, we weren't able to secure one of the crate motors, so we decided to do the next best thing-build one ourselves. Actually, the buildup was more to illustrate the power offered by a healthy stroker motor than to specifically duplicate the FRPP crate offering. But since we had the major ingredients (heads, cam, and stroker internals), this is what might be expected from the crate assembly as well.

What better way to start a buildup than with a freshly machined 5.0L block. The production block was bored 0.030 over in preparation for the CHP rotating assembly.

Starting from the top and working our way down, we gathered all the necessary components to assemble a solid street stroker, the highlight of which was a set of the FRPP Z304 aluminum cylinder heads. Loyal readers will remember that we tested these heads in our Ultimate Guide to Cylinder Heads, and the FRPP offerings proved themselves quite powerful. When first introduced, the Z304 heads were offered bare, requiring that enthusiasts assemble the necessary valvetrain components. Since that time, FRPP has seen fit to offer the heads as completed assemblies under PN Z304DA. The assembled heads came with stainless steel valves measuring 2.02 on the intake and 1.60 on the exhaust. Also included in the mix was a set of beehive valvesprings that offered 130 pounds of seat pressure at 1.800 inches installed height, and 293 pounds of open pressure at 1.200 inch. This valvespring combination was perfect for a healthy hydraulic roller cam profile of up to 0.600-inch lift. In fact, the valvesprings did not experience coil bind until 1.085 inches, giving more than 0.100 inch clearance with a 0.600-inch lift cam. Naturally, you will want to measure retainer-to-seal and piston-to-valve clearance as well.

According to the FRPP catalog, a set of CNC-ported Z304 heads (PN M-6049-Z304P) are also offered, but these were not available to meet our dyno schedule. The supplied literature said the new CNC heads flowed more than 300 cfm, and we look forward to running them. The as-cast Z304 heads were no slouches, though, with intake flow over 275 cfm and exhaust flow near 220 cfm. Credit for the impressive flow goes to the choice of valve sizes (significantly larger than those employed in stock 5.0L heads), the generous port volumes of 204 cc (intake), and 85 cc (raised exhaust), and overall efficient port shape. Though our heads did not feature CNC porting of the intake and exhaust, they did include machined combustion chambers. The Z304 heads required use of dedicated roller-rocker arms, something we consider mandatory on any performance buildup anyway. FRPP supplied a set of its M-6564-F351 roller rockers. The Z304DA heads did come with laser-cut guideplates for use with 5/16-inch pushrods and the necessary 7/16-inch rocker studs. With all the impressive hardware, it's easy to forget that the aluminum con-struction kept the bare weight of each head to just 27 pounds, making for significant weight savings over factory cast-iron counterparts. 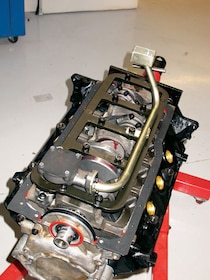 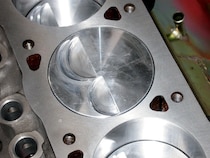 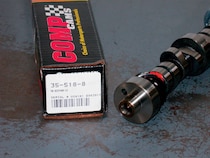 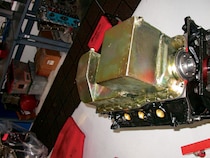 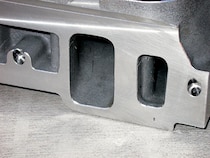 Once we had the headgear in order, we took care of the rest of the induction system and cam timing. Topping off the Z304 heads was the tried-and-true Edelbrock Victor Jr. intake and a Holley 750 HP carb. Right out of the box, the combination provided a balanced air/fuel curve along with plenty of power. The single-plane intake also helped tailor the power curve slightly higher in the rev range compared to a dual-plane. Initially, we wanted to utilize the Z303 cam profile from FRPP, but some digging revealed that the 347 crate motor was actually equipped with an even wilder cam. Unlike the single-pattern Z303, the crate motor cam offered a dual pattern with more lift and duration.

The Z304 heads featured M-6513-BH beehive springs designed to provide 130 pounds of seat pressure (at 1.800 installed height) and 293 pounds of open pressure. The springs allowed over 0.650 lift, which was more than enough for our Z303 cam.

Were this a 302, we'd likely opt for the smaller Z303, but since we had the extra displacement working in our favor, we decided to step up to the slightly bigger crate motor cam. According to the catalog, the cam used in the crate motor offered 232 degrees of intake duration and 240 degrees of exhaust duration. The duration figures were combined with a 0.563/0.584-inch lift split. Since FRPP did not list this cam in its catalog, a little research on our part netted this grind in the Comp Cams catalog under the heading XE282HR.

With the power producers taken care of, we needed a short-block in which to put them. Turning to Coast High Performance, we decided that one of its Street Fighter stroker motors best fit the bill. The CHP 347 featured a brand-new production two-bolt block stuffed to the gills with a 3.40-inch stroker crank, forged connecting rods, and matching forged pistons. Though Coast High Performance offers a steel crank, we decided the cast crank was good enough for our street motor. Having never broken a crank (cast or otherwise) from sheer power production, we felt safe with the cast version in this application. The CHP internals included forged pistons with valve reliefs for both inline and Trick Flow Twisted Wedge heads. Naturally, the CHP short-block included new rings and bearings, along with the necessary precision machine work.

Since we received the short-block assembled, all that was necessary was to install the Comp cam, Z304 heads, and Victor Jr. intake. We also took the liberty of running a set of 1 3/4-inch Hooker Super Comp Headers, a CSI electric water pump, and an MSD ignition. The Z304 heads were installed using Fel-Pro 1011-2 head gaskets and ARP head studs.

The FRPP 347 crate motor was rated at 450 hp, and we were hoping that our combina-tion would equal that power output. Before running the new motor in anger, we subjected the stroker to a 30-minute break-in period.After we were convinced that the rings had become properly acquainted with the cylinder walls, we replaced the conventional oil with Lucas synthetic. A few full-throttle loads on the dyno indicated that the jetting in the Holley 750 HP carb was spot on. The timing curve from the MSD distributor was locked in place at 34 degrees (the setting that produced the best power curve). After just two pulls, we were rewarded with peak power numbers of 478 hp and 434 lb-ft of torque. Torque produc-tion from the stroker exceeded 400 lb-ft from 3,800 rpm to 6,100 rpm, making for one sweet powerband.

We were hoping to reach the 450hp mark, but we exceeded that number from 5,700 rpm to 6,700 rpm. There was a small price to pay for the healthy Xtreme Energy cam employed in this stroker. Both idle and low-speed driveability were diminished slightly compared to a milder grind, but it's hard to argue with the power production of such a simple stroker. Install this 347 in a Fox Mustang , and you're ready to go out and catch some Zs.