Grab any issue of MM&FF and read through the ads to see how many intake manifolds are currently available for the long-since-dead 5.0L Mustang. Don't get me wrong-the first car I ever purchased was an '88 5.0 Mustang LX, and if things go as planned, my new son will be driving it as soon as he gets his license. Despite the absence of the car that started an industry, manufacturers continue to not only sell products for the 5.0, but also design new ones. At last count, there were about a zillion intake manifolds for the 5.0, but how many are there for the larger 351W-based motors?

While the 5.0 Mustang was born with a 302 under the hood, a great many owners have discovered the tremendous power offered by a substantial increase in displacement. In addition to the often-discussed peak power numbers, the benefit of a stroker combination is the impressive average power gain. Stick your foot in the throttle of a stroker and you are immediately rewarded with a surge of power.

While the 5.0 motor is the basis for a great many buildups, the basic architecture is somewhat limited in terms of displacement potential. The limiting factor is based around the relatively short deck height. Physically, there just isn't enough room to substantially increase the stroke and provide enough room for a reasonable connecting rod length and compression height for the pistons (for proper crown strength). Combine this with a cylinder wall thickness that usually only (safely) accepts a 0.030-inch overbore and you have dramatically limited the possible displacement. A production 302 can be bored and stroked to produce as much as 355 inches, but most stick with 347 inches.

Small-block Ford owners looking for additional cubes are required to step up to the larger 351 Windsor block. With the taller deck height (the measurement from the crankshaft centerline to the block's deck), the 351W can easily achieve displacements topping the 400-inch mark, the most common (for a production block) being 408 inches. Where the power gains offered by a 347 stroker will be noticeable, those from a 408 will be noticeable. To put this into perspective, a 347 will generally produce an additional 45 hp over the 302, but a 408 will offer 106 hp (given the same specific output). In addition to the improved power output, the 408 will also likely offer an additional 100 lb-ft of torque (everywhere).

But it's not all gravy, as there are problems associated with the larger-displacement motor. One area that needs to be addressed is the induction system. We mentioned that intake manifolds abound for the 5.0, but pickings are considerably slimmer for the larger 351W motor. No serious enthusiasts in their right minds would think about running a factory 351W truck intake on a performance stroker, so it's off to the aftermarket for a decent performance manifold. Not only does a manifold need to fit the taller-deck 351W, but it must offer enough flow to support the power needs of a larger stroker version. After all, a 408 stroker's airflow needs are different from that of a standard 351. Restricting the breathing of a stroker motor is like not having the displacement in the first place. Properly topping a stroker motor will result in a knock-out punch for any street Stang or other fast Ford.

While carbureted intakes are obviously avail-able for the 351W motor (and stroker variants), we wanted to run an EFI system on our 408 supplied by Coast High Performance. The big-inch street motor featured a 4.00-inch crank attached to a set of forged connecting rods and dished pistons. The dished pistons were employed to produce a pump-gas-friendly 10.2:1 compression ratio. You may remember this 408 buildup from the AFR 205/TFS 205 head shoot-out. While that test was run with a carbureted intake, we decided this motor deserved an EFI intake designed with street use in mind, since not every Mustang owner wants to get rid of the driveability and fuel mileage offered by the factory EFI setup. 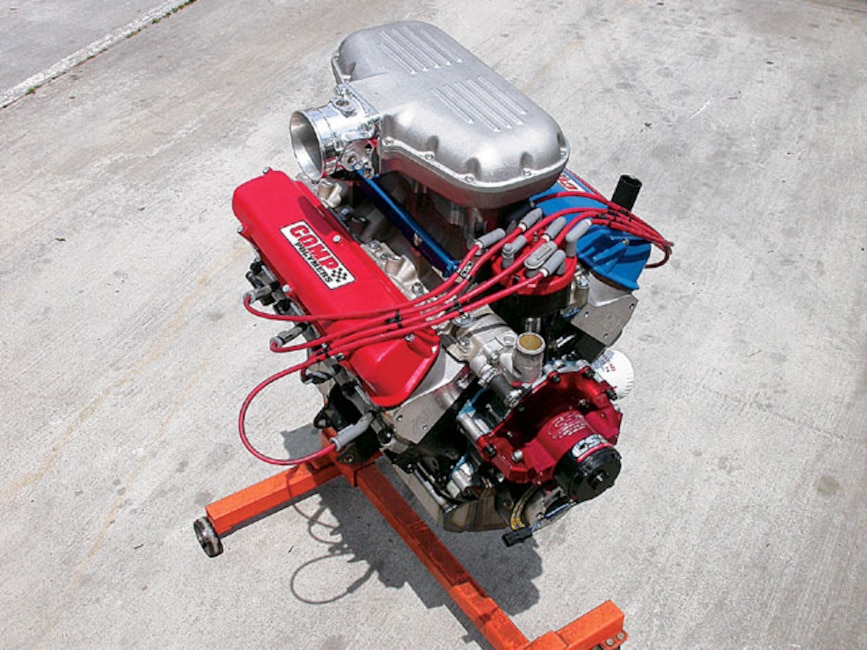 Is there really an EFI intake powerful enough to top a 351W-based 408 stroker? 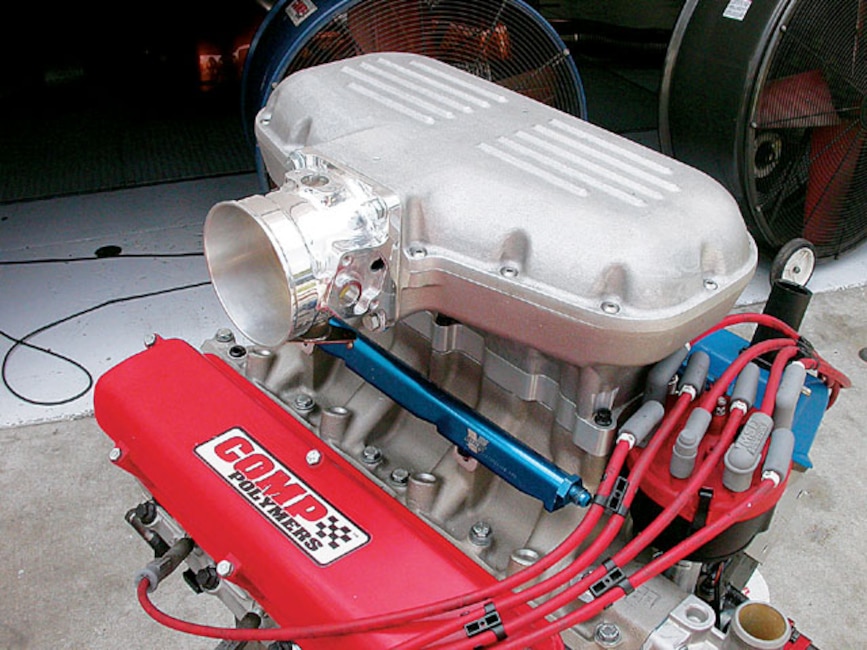 As luck would have it, there is indeed an intake that not only bolts right onto the wider (than a standard 5.0) 351 Windsor, but flows enough to support larger stroker versions. 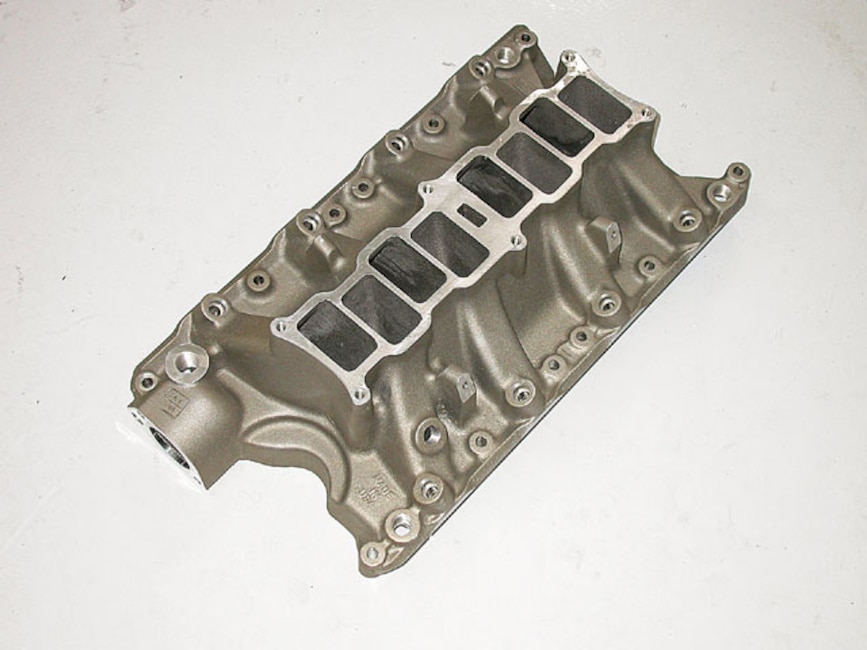 Like the intake systems offered for the 5.0-based motors (both 302 and strokers), the TFS Box R intake featured a dedicated lower intake designed for use with the taller-decked 351W block. The lower intake featured provisions for the injectors, rail, and all the necessary sensors and PCV lines. 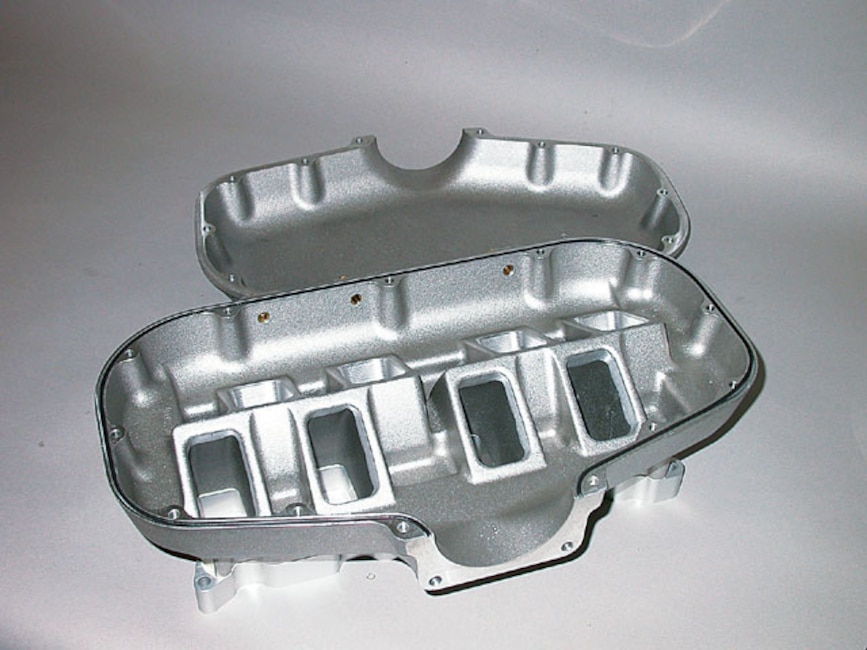 The lower intake will accept a variety of upper intakes, but we decided to run the Box R upper intake on the 408 stroker. Note the two-piece construction (with O-ring seal) and generous port size to maximize airflow. The Box R upper intake was set up to accept a massive 90mm throttle body from Accufab. 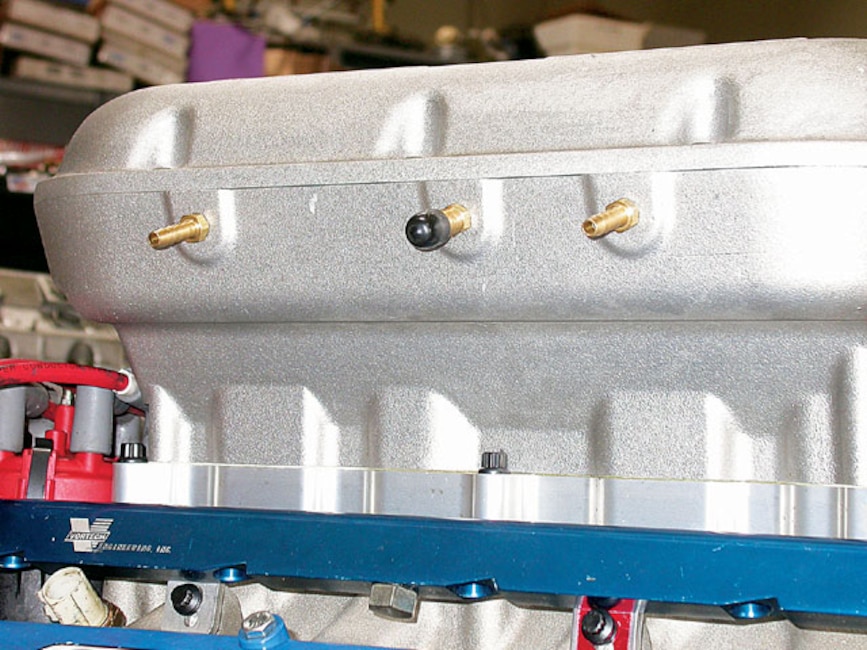 The upper intake was drilled and tapped to accept vacuum fittings for the PCV, fuel pressure regulator, and various vacuum lines necessary on your average 5.0 Mustang.

We also stepped up the cam profile to ensure the 408 offered plenty of power in injected form. The 408 was still equipped with the AFR 205 heads left over from the head test. We would like to have run the new CNC-ported TFS TW heads, but we (meaning I) got lazy and didn't perform the head swap (which also required a valvespring upgrade) before installing the new TFS intake. The XFI cam profile checked in at 238/248 degrees at 0.050, while the lift measured 0.579 inch with a 114-degree lobe separation angle. Hooker headers, an MSD ignition, and the FAST management system were also employed.

The highlight of the EFI stroker was the fuel-injected intake system. We have tested the new Box R intake from Trick Flow Specialties on a 331 stroker, but we have not combined the upper intake with the 351W-based lower manifold. You may remember the Box R intake was tested against the TFS R upper intake on the 331 stroker, with excellent results. The Box R upper intake offered a significant gain in upper-rpm power without the usual sacrifice in low- and midrange torque (compared to the TFS R intake).

A peek inside the two-piece upper intake reveals why it works so well in stroker applica-tions. The first thing you notice is the massive throttle opening, as the Box R was set up to accept a 90mm throttle body. We obliged the intake by supplying the opening with a 90mm throttle body from Accufab. Other beneficial features included generous port volumes with a smooth radius on the entry to maximize air-flow (while minimizing turbulence). Unlike previous box-style intakes, the upper intake featured extensions of the runners rather than simply ending them at the junction of the upper and lower intake. While maximizing the airflow through the runner is important, so is providing proper runner length to optimize the reflected wave tuning. The supercharging effect offered by the reflected waves dramatically improves the power production offered by an intake design.

The lower intake was designed to not only fit on the taller-decked 351 Windsor, but also allow the Box R (or other TFS upper intakes) to bolt right on. In addition to accepting the different TFS upper intakes, the 351W lower manifold also features provisions for the IAT (inlet air temp), ECT (engine coolant temp), and factory fuel injectors. The manifold was drilled and tapped to easily accept the factory fuel rail, thermostat housing, and heater hose assembly. Unlike a number of aftermarket intakes, the TFS Box R was easy to bolt onto the lower intake and did not interfere with the factory (or our taller aftermarket) valve covers. The upper intake was drilled and tapped for a number of different vacuum lines (for the fuel pressure regulator, brake boost, and interior accessories).

We also liked the O-ring seal used between the two halves of the upper intake and the fact that the Box R did not interfere with the large (factory) distributor cap. There is nothing more frustrating than installing an intake in your driveway and having to grind the cap or valve cover to get it to fit properly.

Given the displacement offered by the CHP 408 stroker, we were hoping to exceed 500 hp with the TFS EFI system. The Box R upper intake and 351W lower manifold were installed on the 408 with a set of 36-pound injectors using a Vortech aluminum fuel rail. The FAST engine management system was tuned to provide an air/fuel ratio of 13.0:1 (12.6:1 at the torque peak) and total ignition timing of 32 degrees. After tuning, we were rewarded with peak power numbers of 525 hp (at 6,300 rpm) and 530 lb-ft of torque at 4,500 rpm. While the peak power occurred at 6,300 rpm, note that the torque peak occurred at just 4,500 rpm. Having nearly 2,000 rpm between the peak torque and horsepower numbers meant the injected 408 provided a broad powerband. Torque production from the 408 exceeded 500 lb-ft from 3,600 rpm to 5,400 rpm. Torque production exceeded 450 lb-ft all the way to 6,100 rpm. With 525 hp on tap, there is one injected 408 that can provide a knock-out punch. Now throw in the impressive torque curve and extra efficiency of the EFI system and you have the makings of a serious and reliable street stroker.

Wanting to test the merits of the EFI intake, we decided on a 408 short-block from Coast High Performance. The CHP stroker short-block featured forged pistons and rods spun on a 4.00-inch stroker crank.

The motor was topped with the same AFR 205 heads used recently in the AFR/TFS head shootout.

The TFS intake was run on the engine dyno with the FAST XFI engine management system.

The TFS intake was tested with 36-pound injectors.

Given the displacement offered by the CHP 408 stroker, we were hoping to exceed 500 hp with the TFS EFI system. The Box R upper intake and 351W lower manifold were installed on the 408 with a set of 36-pound injectors using a Vortech aluminum fuel rail. The FAST engine management system was tuned to provide an air/fuel ratio of 13.0:1 (12.6:1 at the torque peak) and total ignition timing of 32 degrees. After tuning, we were rewarded with peak power numbers of 525 hp (at 6,300 rpm) and 530 lb-ft of torque at 4,500 rpm. While the peak power occurred at 6,300 rpm, note that the torque peak occurred at just 4,500 rpm. Having nearly 2,000 rpm between the peak torque and horsepower numbers meant the injected 408 provided a broad powerband. Torque production from the 408 exceeded 500 lb-ft from 3,600 rpm to 5,400 rpm. Torque production exceeded 450 lb-ft all the way to 6,100 rpm. With 525 hp on tap, there is one injected 408 that can provide a knock-out punch. Now throw in the impressive torque curve and extra efficiency of the EFI system and you have the makings of a serious and reliable street stroker.