Got a four-banger with a T3 turbo in need of help? Here's how to give it a quick rebuild.

June 1, 2006
Most turbo 2.3s came with Garrett/AiResearch T3 turbochargers. They were cheap to make but proved to be fragile, as failures occurred after just a few years of service. They were installed on countless Ford and Mercury vehicles during the '80s, so stumbling across one in your life is inevitable. We'll show you how to freshen yours.

There comes a time in every Mustang enthusiast's life when darn near everything in your car has been taken apart. From the engine to the trans-mission, the rear axle to even the alternator, your curiosity has taken you deep within the bowels of your ride. But if you're a 2.3 Turbo-4 owner, there's probably one part you've never dared to touch-the turbocharger.

From 1979 to 1986, Ford offered turbo-charged performance in carbureted and fuel-injected guise on special-edition Mustangs, Capris, Thunderbirds, Cougars, and Merkurs. The turbo itself was a delicate piece that often went bad with just 50,000 miles of regular service. Most owners simply had a local repair shop put in a rebuilt unit, which typically cost well over $1,000. Others simply dealt with the smoke and lack of turbo boost and carried on with their lives or sold their cars. It pains us to know we can save a ton of money by fixing it ourselves, which is why we decided to do some investigating.

We've always heard that turbos can only be disassembled and put back together by qualified technicians with special tools-that's true, to a certain degree. For instance, because the turbine shaft and compressor wheels are zero-balanced separately from the factory, you can get by without balancing the unit. But bear in mind that the working bits within a turbocharger spin at around 100,000 rpm, so we recommend having the shaft and compressor wheel checked for trueness and balance. We opted to not have it done because of our deadlines, but it is recommended and entirely dependent on your budget and time. Our purpose is to show you how to take apart the unit yourself and to perform a bearing and sealing-ring change. Typically, these are the two biggest culprits for excessive noise, low boost, and oil leaks.

When working on any intricate mechanical component with small parts (such as a valvebody) give yourself plenty of working space that's clean and well lit. Since many new parts that you've never seen before will be flying out at you, keep a magnet around. Taking some-thing apart is always easier than putting it back together, so please take your time-putting it back together and making it work is the point here. Just be careful and stay committed to doing it right.

We chose to rebuild a Garrett T3 turbo out of an '85.5 SVO, which we recently purchased to learn more about the turbo-4 experience. The T3 is by far the most popular unit ever used by Ford from the factory and can be found under the hood of just about any turbocharged 2.3-liter engine. The service parts are plentiful on the aftermarket so if you need a centersection, turbine housing, or even a complete rebuilt unit, it's just an Internet search away.

This particular turbo was working fine until we started turning up the boost. After 18 psi it began to smoke terribly and, eventually, it failed with terrible noises. But after our quick freshening, it was performing like new once again, functioning just as well as it used to and making 18 pounds of steadier boost. Providing that all the hard parts are still good (as ours were) you can freshen up the turbo yourself with nothing more than an afternoon's amount of labor.

Boost on, our turbocharged friends! 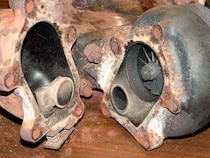 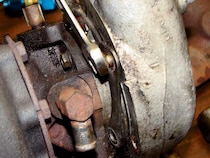 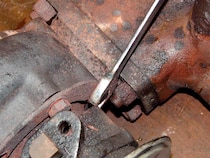 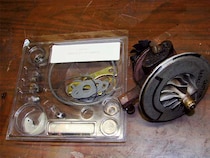 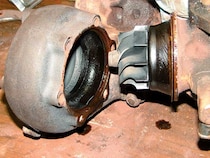