We're finally making some big gains in our Colt of Personality Pro Touring project, and this month, we're stuffing the engine and transmission into the car for the first time.

Having spent the better part of a year shoring up the sheetmetal and installing TCI's trick suspension components on our fastback Mustang, we were finally ready to check fitment of our engine and transmission, both of which are substantially larger than the components they are replacing. Weight wise, the 5.0L Coyote V-8 is similar to the small-block Ford engine it is replacing thanks to its all-aluminum construction, however, it's dual overhead cam cylinder heads make it much wider. This isn't a problem once you remove the shock towers, and that's something we accomplished back in our July '12 issue of MM&F. Similarly, the Tremec T-56 Magnum six-speed transmission fits nicely once some of the original sheetmetal is removed as well.

For the utmost in technology, driveability, and reliability, we went with a 5.0L Coyote crate engine from Ford Racing Performance Parts. The all-aluminum mill brought back the 5.0L displacement and heritage to the Mustang in 2011, and it's a thoroughly modern 5.0L 32-valve dual-overhead-cam V-8 that uses advanced features like Twin Independent Variable Camshaft Timing (Ti-VCT). The increased displacement combined with the trick variable cam timing produces an abundant amount of low-end torque—something previous modular engines could only dream of. Though the block features lightweight aluminum construction, it's also equipped with cross-bolted main bearing caps and thick main bearing bulkheads for bottom-end strength. Ford also optimized oil drainback and windage control to improve high-rpm performance. To get the engine up and running, we'll be using FRPP's wiring, PCM and installation kit (M-6017-A504V), which is designed for street rod/project car installations.

The Coyote has really set the standard for base V-8 Ford engines. Though its bigger 5.8-liter brother from the GT500 now makes 662 horsepower, the 5.0L has proven to make more than 400 rwhp when tuned with aftermarket software, and we've seen 600- to 800-rwhp applications when forced induction is involved.

Here's a quick rundown of the DOHC 5.0L's specifications:

To make sure we are able to utilize the Coyote's 412 horsepower (as well as any extra ponies we add later on) we looked for a clutch assembly that could handle copious amounts of power and torque.

Centerforce's DYAD Drive System is designed for vehicles with extreme power levels (up to 1,300 lb-ft of torque), yet offers a stock-like clutch effort. Centerforce's patented ball bearing pressure plate (it's the clutch with balls, literally!) allows for increased clutch-holding capacity, while maintaining a light pedal effort, and the patented multi-disc floating and drive disc design provides quiet operation with a smooth and predictable engagement. It's a top-of-the-line piece that's right at home in our high-end, Pro Touring build. It'll see all sorts of track abuse as well as plenty of stop-and-go traffic, so driveability and durability were equally important to us.

With road courses and autocrosses in it's future, Colt of Personality was destined to have a stick shift, and after consulting with Tremec regarding our Coyote powerplant, the company recommended its T-56 Magnum six-speed transmission. Based off of the '07 GT500's TR-6060 six-speed gearbox, the T-56 Magnum gets all of the upgrades that make the 6060 the stout, yet smooth-shifting transmission that it is. The versatile Magnum offers multiple shifter-mounting locations, dual speedometer pickups for versatility, a choice of two different gear ratio sets (2.66 or 2.97), with unique double overdrive ratios, and short and crisp, low-effort shift throws. The internal improvements also make it easy to shift at the high rpm that today's modern engines, including the Coyote, require.

With the engine and transmission set in the car, we can rebuild the transmission tunnel sheetmetal around the bigger gearbox. We now have the car pretty much at the correct ride height as well, and that will allow us to move on to the installation of the fender flares. Before you see that, though, we'll be bringing you the TCI rear suspension installation, so stay tuned. We think we've reached the halfway point in the this project—hopefully it's all downhill from here. 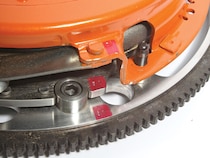 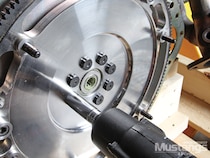 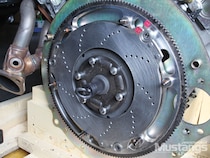 20. With the weight of the drivetrain in the car now, we can move on to the next step of the project, which is welding up the fender flares that we procured from National Parts Depot. We wanted the car at final ride height before we start modifying the fenderwells, and with a borrowed set of wheels from Lauren and Aaron Miller’s Eleanor project that GPR is currently painting, we can mock up the fenders and break out the welder.