Having a firm idea of what you expect your engine to do once it is bolted between the framerails will ensure that once you have assembled it, that you are using it in the manner it was designed for. Brent Lykins of B2 Motorsports (Simpsonville, Kentucky) was building a small-block Cleveland powerhouse for a customer, and together they came up with a road map that would lead them to peak performance.

"Brian Gilchrist came to me wanting a stroked 351 Cleveland that would be brutal on the 'strip in his '69 Mustang, but also could be cruised on the street with 91- to 93-octane pump gas, says Lykins. "It's always somewhat tricky to ‘ride the fence' between a street engine and a race engine, but it gets easier when the car's parameters allow some stretching of the rules." Brian's Mustang is running a C4 trans with a fairly loose converter and the driveshaft is turning a set of 4.11 gears in the back.

This engine is somewhat of a "hybrid," as Lykins put it. The small-block was equipped with a solid roller camshaft and stud girdle, high-flowing aluminum heads, and a single-plane intake, but it was built with just under 10.5:1 compression and a cam that would allow "sane" spring pressures—basically it's a tuned down race engine. 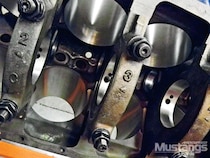 Starting with a seasoned two-bolt-main, cast-iron block, Lykins sent the Cleveland to Dale Meers Racing Engines (Buffalo, Kentucky) for cleaning and machining before he set about installing the rotating assembly.

"In this economy, it's actually more cost-effective for me to have someone else do the machine work. Lower overhead helps tremendously, and I have a good working relationship with Dale. He knows how picky I am and as I double check his work, it gives him good feedback as well." Lykins utilized a Scat 4340 forged steel crankshaft with a four-inch throw on the journals. From there, a set of forged Scat H-beam connecting rods swing an octet of inverted-dome Mahle coated pistons that are surrounded by a fairly thin ring pack.

The cylinder heads are CHI's stout 208cc 3V, which Lykins picked not only for their flow numbers, but their port velocity as well. "A well-flowing port that has some speed behind it is a killer combination," Lykins notes. 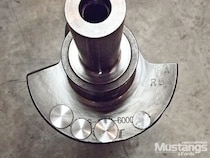 CHI was also tapped for the single-plane intake manifold—both the intake and cylinder heads were used as cast and out of the box. Lykins did change the valvesprings to better work with the camshaft, however.

For the camshaft and valvetrain, Lykins prefers Competition Cams products, and ordered a custom-ground solid roller based on Xtreme Energy cam profiles. On the order was a set of Comp's pressure-fed solid roller lifters, valvesprings, tool steel retainers, roller rocker arms, and a stud girdle to hold the top of the valvetrain together.

Directly above the intake manifold sits a Quick Fuel Technologies Q-Series 850-cfm carburetor that was tweaked by Scott Perkins of Elizabethtown, Kentucky. Lykins has Perkins work up all of his fuel mixers for him and they have proven to be repeatable and reliable.

The 408ci small-block did not disappoint on the Stuska dynamometer at Dale Meers Racing Engines, and should prove to be a stout powerplant on track. Read on to see how it went together and how it performed. 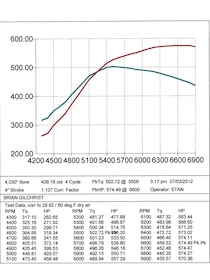