It's been a couple of issues since we last saw our '72 Mach 1 project on these pages, and this month, we're back to report on the culmination of our efforts to bring some speed back to the Mach 1 through the addition of new suspension components and a modern wheel and tire package.

Back in the March '11 issue, we started modifying a '72 Mustang Mach 1 ("Equestrian Competition," pg 28) after running it on the road course at Gainesville Raceway and coming to the conclusion that this ponycar had all of the handling characteristics of a sailboat navigating through high swells. With the non-supportive factory bucket seats already hampering our efforts to remain seated in one position, the Mach's body rolled like a blue whale waving to boaters, which prevented us from viewing the apex of any turn on the course. The inside front corner would just rise up and block the entire view, so cutting the corners properly was purely an educated guess.

That's just not a safe way to drive under any circumstance, whether you're in the grocery store parking lot or at your local track, so we called up the restomod specialists at Mustangs Plus, who guided us to one of the company's Super Starter kits.

The Mustangs Plus Super Starter kit is available for all '65-'73 Mustangs and while each kit contains basically the same parts, Mustangs Plus custom tailors the selection to each vehicle and owner's needs. The Super Starter combines three subsystems into one big package. Included are a spring and handling package, a suspension rebuild package, and a steering upgrade package. Prices start at $799.95 for the Super Starter kit, and every component is backed by a lifetime guarantee. The list of included parts is long, and features new coil springs, leaf springs, shocks, an antiroll bar, endlinks, upper and lower control arms, inner and outer tie rods, adjustment sleeves, and strut rod bushings, just to name a few.

Since the Super Starter kit is, when it comes right down to it, re-engineered factory parts, everything bolts in easily and there are no surprises during installation. This being the case though, one might not think that such a vast improvement could be made but this wasn't the case.

With the Mach 1's suspension suitably upgraded, we turned toward the stock steel 15-inch wheel and tire package. While the Magnum 500s look period correct, and complement the Mach 1's styling cues well, they're heavy, limit brake upgrades, and were shod with a set of very old tires. While a new set of rubber on the 15s would have made for a more accurate comparison, we had no intention of running the 15s in the near future and went straight to a modern wheel and tire combination.

Catering to the musclecar crowd is La Mirada, California-based Vintage Wheel Works, which offers several modern aluminum versions of classic performance wheels that offer modern construction with a vintage look. Truthfully, any of the company's wheels would have looked great on our Mach 1, but in the end, the car's owners, Robin and Rob Cardinal, chose the V45 model.

The Vintage 45 is available in sizes from 15x4 through 18x9.5, and for our ride, we chose the 17x8 size for all four corners. This would allow us to rotate the tires as needed, and ensured that we would have no rubbing issues. The V45 is a two-piece wheel with five curved spokes that have a rounded "D" shape. They come with a media-blasted center and spoke area, and polished outer barrel. According to Vintage Wheel Works, the center disc is manufactured from virgin 356 aluminum ingots and heat-treated to a T6 factor. The outer barrel or hoop is made from spun 6061 sheet aluminum and has a fully polished front surface. 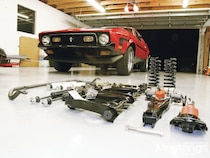 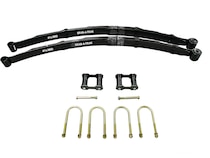 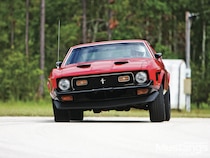 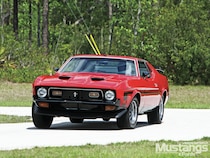 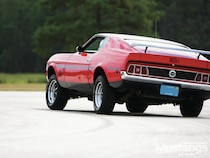 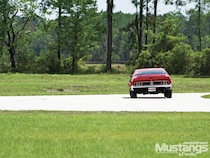 With the wheels chosen, we rang up Summit Racing Equipment in Tallmadge, Ohio, to order a set of tires. Known mostly for it's vast array of performance parts, Summit Racing also carries a line of stock replacement parts, tools, and, of course, tires.

To stick our Mach 1 to the pavement, we picked out Riken's Raptor ZR ultra-high-performance radial tire. The Raptor ZR tires feature an aggressive directional tread pattern for serious grip in both wet and dry conditions. The Raptor's tread compound, along with a high-modulus composition sidewall, is designed to provide quick response during cornering and maximize handling, which is just what we were looking for. The Raptors also have built-in rim protectors that help keep you from curbing your wheels. Going by Mustangs Plus' recommendation, we opted for the P235/45R17 size, which offers a 25.40-inch tire diameter, and a 9.30-inch section width.

The difference in ride quality with just the suspension mods was immediately apparent to the Mach's owners during the ride to and from the alignment shop. The ride was noticeably flat with minimal body roll, but was also still comfortable and not at all harsh or bone jarring. After getting the Mach 1 back on the road course at Gainesville Raceway (Gainesville, Florida), we concurred with their assessment. The ride had a much tighter feel to it, similar to what you find in a newer vehicle. For the relatively minimal investment, the ride quality was confidence inspiring, and allowed us to more accurately point the car around the course without having to compensate for the sailboat antics of days past.

With the low-profile tires on, steering wheel feedback was much more informative. We could now feel exactly when the car turned in and when it lost traction. We found that brake dive was minimal and didn't upset the handling of the car at all. We also found it interesting that we could feel the front end squirm under heavy braking, which was something that wasn't present, or at least not felt through the wheel with the 15-inch tires on. We should be able to correct that, however, with another trip to the alignment shop.

Sporting the V45 wheels and Riken Raptor rubber, the Mach 1 took to the Gainesville circuit and knocked down a 1:16.17 and a 1:16.70. With a bit more track time, we probably could have whittled the time down into the 1:15s, but we were already impressed and more than satisfied with the improvements thus made.

Lap times do show an improvement of sorts, but the real story lies in the way the Mach 1 drives now. Given that most of us regularly drive cars that were made after 1982, we've largely grown accustomed to the handling characteristics of modern cars. When you climb behind the wheel of an unmodified classic, they simply feel sloppy and slow when compared to even the most mundane modern commuter. Current vehicle handling has improved greatly, and has needed to in order to make cars safer. We now have faster speed limits, more traffic, and more distracted drivers to deal with, so having a car that reacts slowly and rolls over to the point where you can't see where you're going is simply not safe, or enjoyable. With the performance upgrades that we've made to this Mach 1, we've made the Mustang a safer, and a more enjoyable car to drive, while maintaining a smooth and comfortable ride.

When we started modifying this Mach 1, we noted that we would be improving the driving experience, and we've now come a long way in accomplishing that. In an upcoming issue, we'll be making some engine upgrades to the 351 Cleveland powerplant to bring the power level to current Mustang standards as well. Stay tuned.