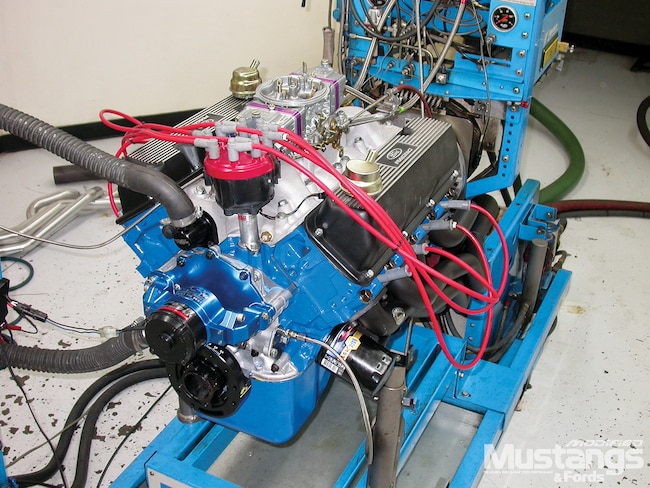 Ford guys, even young ones just cutting their teenage teeth on the Ford mod motor, should at least be familiar with the term Boss 302. Some of us may be too young to actually have driven an original Boss 302 back when they were introduced in 1969, but all Ford guys should know the history of such an impressive performer. That Ford recently revitalized the name for its latest line of 5.0L-based crate engines adds fuel to the fire, but know that the original Boss 302 was the most powerful factory 5.0L ever offered by Ford up until 2011. That being said, we still have to recognize that the late-model 5.0L Windsor-based engine jump-started the modern blue-oval performance revolution.

Designed primarily for use in the SCCA Trans Am series, the Boss 302 was a result of crossbreeding the 302 Windsor short-block with the then-new 351 Cleveland heads. Truth be told, the Boss 302 was introduced before the Cleveland, and the Boss 302 heads differed slightly from their Cleveland counterparts by way of the coolant passages. What the Boss 302 and Cleveland heads did share was tremendous airflow potential thanks to cavernous port volumes. It is this head flow that kept the Chevy (Trans Am and drag racing) motors of the period from matching the power offered by the canted-valve Boss/Cleveland-headed Fords.

Unfortunately for Ford fanatics, the Cleveland family died out after a short run of just 4-5 years. The heads carried on in their smaller 2V configuration in the 351 and 400M motors, but these were basically torque-oriented smog mills designed for heavy hauling, rather than outright performance. Properly attired, the 351 and 400M engines can be made to produce serious power, but Ford decided that the inline-valve Windsor family would carry the performance torch for Ford right through to the introduction of the now-famous 5.0L Mustang.

Until the aftermarket jumped on the 5.0L bandwagon, Ford enthusiasts were forced to make due with ported factory heads. To put this into perspective, even a fully ported, factory iron Windsor head would not flow as well as a stock Boss 302 or 351 Cleveland head. Of course, this all changed when guys like Airflow Research, Dart, and Trick Flow started offering performance aluminum heads for the 5.0L. With the aftermarket in full swing, 5.0L Windsor owners no longer starred longingly at the flow offered by their Cleveland counterparts.

With the Windsor boys finally taking point, where does that leave Boss and Cleveland fans? Actually, a number of manufacturers now offer aftermarket Cleveland heads, thankfully in aluminum. Companies like Edelbrock, AFD, Pro Comp, Trick Flow, and Cylinder Head Innovations (CHI) have all tooled up to produce aluminum heads for Cleveland applications.

A standard Cleveland head's flow numbers of 278 cfm on the intake and 178 cfm on the exhaust are quite impressive. To better the already stout stock 4V Cleveland head, CHI not only improved the airflow, but also reduced what many consider to be an excessive (245cc) port volume. This is said to be the real key to the success of the CHI castings. 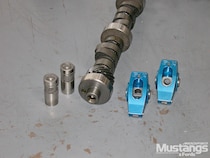 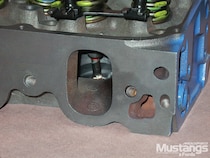 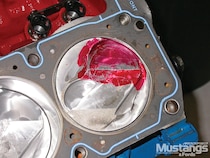 Ford originally offered the Cleveland heads in both 2V and 4V configurations, meaning essentially the engines were fitted with two-barrel or four-barrel carburetion. Since the CHI heads were sized between the original 2V and 4V heads, CHI naturally designated them the 3V. CHI offers a number of 3V head configurations, or more accurately port volumes (and attending flow rates). Since the goal for our 302 was to exceed 500 horsepower, we selected a set of the 208cc 3V aluminum CHI heads. These heads offered a number of desirable features, including a tall intake port roof design, which provided a generous short-turn radius to maximize flow with a given cross section and port volume.

The CHI heads feature a complete Ferrea valvetrain, including Competition Plus, swirl-polished, stainless steel valves (2.19/1.74), double valvesprings designed for the over 0.700-inch-lift solid roller cam(s) we were going to use, and titanium retainers. While the CHI heads offered CNC combustion chambers and an impressive 320 cfm right out of the box, they were given the once over by the gang at Dr. Js. With expert porting on the intake and exhaust, Dr. Js was able to increase the flow rate of the CHI heads to more than 345 cfm at 0.700-inch lift. The heads were now capable of supporting more than 700 hp-more than enough for our 500hp 302.

Given the port-alignment difference between the CHI 3V, and either the produc-tion 2V or 4V, neither of the factory Ford intakes will fit the CHI heads. For this, CHI manufactures its own line of matching 3V intake manifolds. The CHI single-plane intake we are using was designed specifically for use with the 208cc 3V heads on a 302W block (8.2 deck height). Like the heads, the intake was turned over to the flow experts at Dr. Js to ensure that the manifold could keep pace with our ported 3V heads. CHI also offers a number of other intakes for use on the taller 9.2-inch 351C, 9.5-inch 351W, and even the 10.3-inch 400M blocks.

Some of the CHI intakes for the taller-deck motors are available with Dominator flanges, but our 208cc intake came equipped to accept a standard 4150 Holley carburetor. For dyno use, we installed a 950 HP Holley-again more than enough carburetion to reach our goal of 500 hp. Care must be taken when installing the CHI heads, as there is a definite right and left cylinder head-the heads must be installed with the water passages toward the front of the engine so they line up with those in the intake. Also, make sure to seal the Cleveland water passages located on the deck surface before using them on a Windsor application.

Since we needed to rev the engine to at least 7,000 rpm to reach the 500hp mark, we needed a sturdy foundation, which came from Demon Engines. The short-block consisted of a forged steel 3.0-inch crank from Pro Comp, a set of factory 5.135-inch forged rods, and a set of forged aluminum pistons from Probe Racing. The pistons featured small domes and valve reliefs designed to fit the stock Boss 4V (Cleveland) heads to produce a static compression ratio of 10.5:1 using the stock 60cc combustion chambers. A stock 1970 Boss 302-spec solid, flat-tappet cam was used and offered a tad over 0.500-inch lift and 228 degrees of duration at 0.050.

The Boss was topped off with an original aluminum dual-plane intake, 750 Holley carb (they came with 780s originally) and a set of 1 3/4-inch Hooker headers. In stock trim, the original Boss 302 produced peak numbers of 373 hp and 325 lb-ft, pretty impressive numbers considering the stock Boss 302 was rated at only 290 hp and a like amount of torque. Obviously, the Boss 302 was purposely underrated by Ford, but just how much better could we make it?

In stepping things up, we decided to utilize the same short-block, though we did have to disassemble the motor to have valve reliefs cut into the pistons for our more aggressive cam profile(s). Additional upgrades included replacing the stock Boss 302 pan and windage tray with a much-improved version from Moroso. The Moroso oiling system included a full-length, louvered windage tray matched to a deep-sump oil pan and matching pick up. The oiling system upgrades were critical for our high-rpm needs.

Speaking of high rpm, the mild stock Boss 302 stick from Schneider cams was not going to get the job done, so we initially swapped in a roller profile from Comp Cams that we happened to have from a previous project. Though not designed specifically for our CHI-headed 302, the Comp roller worked well and allowed us to exceed the 500hp mark. The Comp roller cam checked in with a 0.731/0.716 lift split (with 1.73:1 rocker), a 252/264 duration split at 0.050-inch, and a tight 107-degree lobe separation angle.

Since we were looking to maximize power production and the short-block was already broken in from its original running in stock Boss 302 configuration, we took the liberty of running ultra-light synthetic oil. Lucas Oil supplied some 5W Pro Stock oil designed for high-rpm race engines with good oiling systems. We also threw on a Holley 950 HP carb, and tried a few different carb spacers, as well as lash adjustments on the combination, with a lash of 0.010-inch on both the intake and exhaust working best with the Comp cam. Once we had emptied our bag of tricks, we were eventually rewarded with peak power numbers of 520 hp at 7,200 rpm and 399 lb-ft at 5,700 rpm. Not bad considering we were dealing with a static compression ratio near 10.5:1.

Having easily surpassed the 372 hp put down by the stock Boss 302 and officially reached our goal of topping the 500hp mark, you'd think we'd call it a day and head down to the local tavern. Not quite. We swapped out the original Comp cam and installed the stick from Cam Research Corp (www.cam researchcorp.com) in Englewood, Colorado. The Cam Research Corp roller cam offered a similar 0.721/0.724 lift split, a slightly smaller 245/249-degree duration split, and an equally tight 102-degree lobe separation angle.

On the first pull we knew we had a winner, as the Cam Research cam not only produced higher peak torque numbers of 418 lb-ft, but also managed to bump our peak power up to 542 hp. A piston-to-valve clearance issue required we run the cam a minimum of 3 degrees retarded, but this didn't seem to hurt power production in our tested rev range. Though slightly smaller in specs, the Cam Research Corp cam offered both more average and peak power numbers than the larger Comp cam (admittedly not specifically made for this application). Having exceeded 540 hp with our CHI-headed 302, we couldn't help but wonder how much cam and compression would be required to top the 600hp mark? But that is another dyno story for another day.