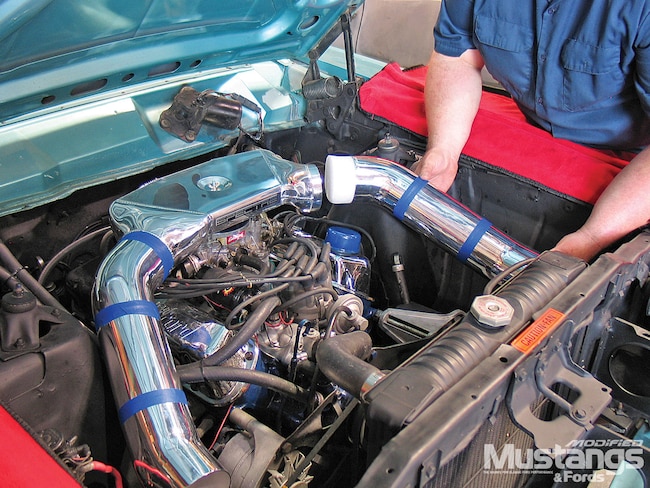 Tech | Cold Air Induction System Install
It's no secret that on our classic Ford cars the factory passenger car air cleaner assembly wasn't designed for maximum horsepower. Rather, a major consideration in the factory design was intake noise suppression. Some factory designed air cleaners came with an open element to reduce intake restriction, but this still doesn't address the issue of engine-heated air being drawn into the carburetor. An open element design will draw the same hot air that the factory enclosed unit will (just more of it) and for this story we wanted to know if getting colder air into our engine would make a difference on a popular classic small-block Ford. Our '68 Torino GT is an original F-code 302 2V-equipped vehicle with a factory style air cleaner, stock exhaust manifolds, and single exhaust; a good representative of a basic Ford small-block project car. It has a C4 three-speed automatic transmission and an 8-inch axle with 2.79 gears. Other than a 500 cfm Edelbrock four-barrel carb and Performer 302 intake manifold, the engine is completely stock. The cam is so mild that it noses over at 4,200 rpm, but the car idles in gear like a sewing machine. With the mild cam and single exhaust it's difficult to hear the engine running inside the car. It's the perfect passenger car engine found in many Ford cars of the era. It was made to idle for hours in Manhattan traffic if need be. Our car was factory rated at 200 horsepower at the engine.

We've run plenty of stock 289 and 302 two-barrel-powered classic Fords in the past on a chassis dynamometer and we usually see between 120 and 140 horsepower at the tire, so we know going in that our Torino is no screamer. However, it's an appropriate car to begin with for baseline testing because it's a good representation of the factory power offering found on many of our favorite classic Ford cars, including Mustangs, Falcons, Fairlanes, and more. For purposes of testing, Spectre was interested in a mostly stock vehicle to eliminate as many variables as possible. A baseline using a stock example would provide the best understanding of the starting point that the factory gave all of us who are beginning from scratch in the upgrading of our engine's performance.

Spectre Performance specializes in automotive fresh air induction systems. We were happy to visit Spectre and have it test the Torino for a baseline and then see what improvement might be realized with one of its dual snorkel cold air kits using flexible ducting. Further, we wanted to see what arrangements the company offered for a solid inlet arrangement for our Torino via its build-your-own-cold-air-intake program. With the build-your-own program you can choose from hundreds of aluminum tubing lengths, angles, and diameters to custom design your own cold air induction for a one of a kind show-ready look. The tubing can be welded or clamped together and Spectre offers several filter housings to ensure you have enough filter area for your engine. For evaluation of road horsepower Spectre has an in-house Mustang chassis dynamometer. We know from past experience and were advised by Spectre technicians that readings on a Mustang dyno run between 15 and 20 percent less than the readings seen for the same vehicle measured on a Dyno Jet. Let's see if the concept of getting cooler air into the carburetor really makes a difference at the rear wheels. 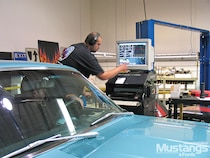 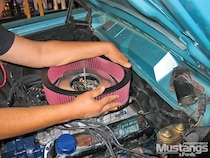 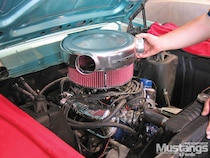 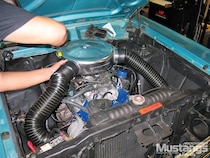 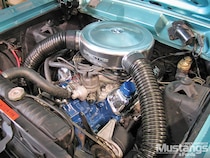 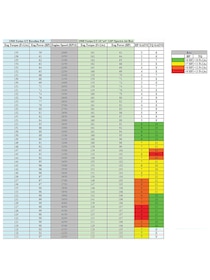 This past week has been one of the busiest weeks in the car industry, thanks to the SEMA 2013 Show held in Las Vegas every year. One of the brightest and most envied accomplishments at the event comes in the form of the Mother’s Shine Award.

This 1969 Ford Torino GT Fastback is one of a kind, with a Sterling Gray basecoat that is sleek to the eye.