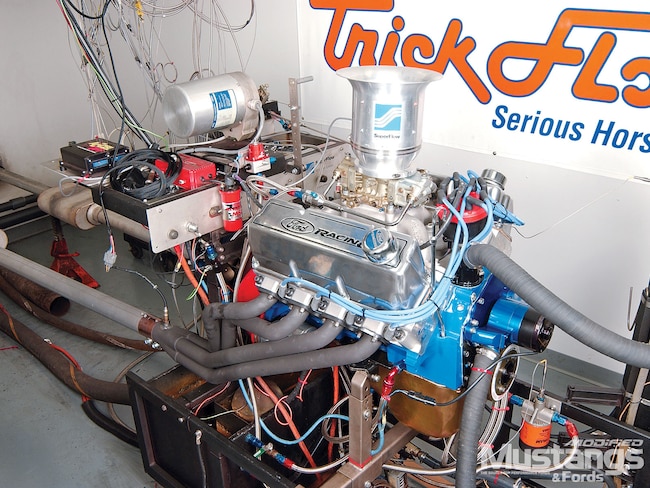 Tech | Custom Engine Build
Over in the Ford camp, they watched with great interest as the new 396 Daytona Mystery Motor from Chevrolet was introduced in 1965. The very successful engine featured a splayed-valve arrangement, which offered improved flow potential when compared to a conventional inline valve configuration. Partly in response to this successful GM offering, Ford introduced the 335-series 351 Cleveland engine for the 1970 model year. Produced from 1970 to 1974, the Ford 351 Cleveland has earned a reputation as one of the Blue Oval's best V-8 engines. Ford designed the 351 Cleveland as a "mid-block" engine option for passenger cars. It made more power than the 289-302-351 Windsor small-blocks, but used the same engine mount locations and bell housing pattern. The Cleveland engines were lighter and more compact than the FE and 385-series (429/460) big-blocks. The Cleveland's cylinder heads offered a canted-valve arrangement similar to the big-block Chevy. This allowed the use of larger valves and ports to increase airflow and power production from a relatively small cubic-inch package.

Ford made two types of Cleveland engines with designations based on carburetor type. The 2V had a two-barrel carburetor and made lots of low and midrange torque. The 2V cylinder heads featured open-style combustion chambers with a 2.04-inch intake valve and a 1.77-inch exhaust valve. These valves were larger than the ones used on the 390 and 428 FE big-blocks. The 2V heads had round intake and exhaust ports. More than 90 percent of Cleveland production was 2V engines. The 4V Cleveland was a whole different matter.

The 4V Cleveland heads were designed for top-end horsepower and the engine came with a four-barrel carburetor. The cylinder heads had massive 21/2-x13/4-inch intake ports and the valves for the 4V engines, which were built through 1972, were equally generous with a 2.19-inch diameter on the intake and 1.71 inches for exhaust. The only other Ford engine with valves that large was the 460 Police Interceptor.

As you can see, the Cleveland engines pose a bit of a dilemma. The 2V engines lack the upper rpm horsepower capabilities of their 4V cousins and in turn the 4V engines had lousy street manners and didn't really come alive until 3,500 rpm and above. The source of the dilemma was in the cylinder heads. You'd think Ford would have made a head that combines the best qualities of the 2V and 4V designs, and you would be right, but only for Australian market 302s and 351s, which were produced until 1982. The Aussie heads combined 2V-sized runners and valves with 4V-type closed combustion chambers, resulting in an excellent performance street head. Factory Australian heads are sought after here in the U.S. to upgrade the 351 Cleveland because they add about one point of compression over open chamber 4V heads. Cleveland heads can also be adapted to the readily available and more affordable 351 Windsor blocks. This combo is commonly known as a "Clevor."

Now, thanks to Trick Flow Specialties you don't have to hunt down a pair of Australian heads or make do with factory 4V castings. The company's Power Port Cleveland aluminum cylinder heads will provide all the airflow you'll need to build a serious street or bracket racing engine and they're ready to bolt-on right out of the box. The Trick Flow Power Port Cleveland heads are similar to the Ford Aussie heads in that the Power Port Cleveland units combine 2V-based intake and exhaust runners with 4V-style closed combustion chambers. However, Trick Flow engineers raised the exhaust runners 0.100-inch from the stock location. This improves the short side radius of the runners, dramatically increasing airflow. Trick Flow also modified the oil return system to improve oil drain back into the pan, and included coolant passage provisions for mating the Power Port heads to a 351 Windsor block. A little machine work is all that's needed to finish the conversion. 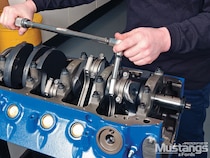 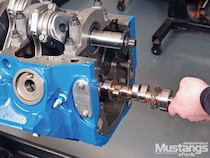 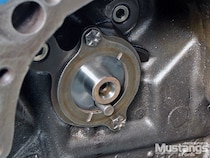 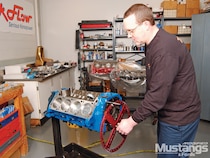 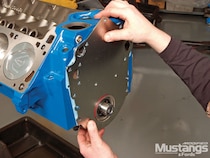 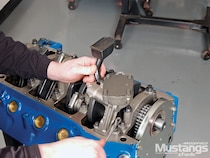 Trick Flow builds engines and tests the results on its in-house dyno because it's an important part of their development process. In fact, no cylinder head goes out the door until it's been put through the test on the Superflow engine dynamometer and comes out making the desired horsepower. To test the new 351C Power Port Cleveland 190 cylinder heads, Trick Flow built a 383ci engine with a 9.65:1 compression ratio. Engine builder Ron Greczanik stuffed the 2V block with a Probe forged crank and pistons, Eagle Specialties rods, and a Crane 0.236/0.240-inch lift hydraulic roller cam. Other bits include an Edelbrock Performer Air-Gap intake manifold, Trick Flow 1.73 roller rocker arms, and an MSD Billet distributor. Outfitted with a Holley 750-cfm Double Pumper carburetor and 13/4-inch dyno headers, the 351 proved to be a stout motor, cranking out almost 524 hp and 480 lb-ft of torque. Like a Cleveland 4V, peak horsepower came in at a lofty 6,500 rpm. Peak torque arrived at a touch over 4,500 rpm. But the Power Port heads shined down low as well, with more than 400 lb-ft of torque available at 3,000 rpm. Thanks to Trick Flow and its Power Port Cleveland heads, you can now build a 351 Cleveland (or a 351M, 400, or 351W) that is a true all-around performance engine that's at home on the street or at the track. Follow along with us and we'll show you some of the more interesting details in this Cleveland combination build.