It's no secret, nor is it by accident that a majority of our tech reports focus on engine/drivetrain-performance upgrades for late-model Mustangs. Handling and braking improvements also get love on these pages, but we admit the bulk of our mods coverage focuses on horsepower and ways of making more.

The aftermarket is chock full of individual bolt-on parts and multi-leveled systems designed for making the big steam we covet. Bits that enhance intake airflow, volume, or air temperature are the go-to components for generating that sacred horsepower. When taking a closer look at the nuances of intake air for our Mustangs' powerplants, we've learned that increased density is a major criteria for posting big power numbers at the feet.

Power adders such as nitrous oxide, as well as forced-induction systems like turbochargers and superchargers, are the popular methods of simultaneously increasing a Mustang engine's intake-air density and volume. A fast, cold air charge basically mixes with fuel and allows more oxygen to enter the combustion chamber, which in turn promotes a more-powerful combustion event by eliminating the pre-ignition that is a byproduct of increased cylinder pressure. The result, of course, is more horsepower, which we all agree is good.

Intercoolers of air-to-air and water-to-air design are common additions to the aforementioned forced-air systems. The 'coolers serve as heat sinks, which dissipate heat from discharge before that air enters an engine. The water-to-air unit's ability to use ice as a method of super-cooling the water that passes through its core makes it a tremendously efficient device for lowering temps and promoting denser air. By comparison, the air-to-air systems work well, but because of their traditional front/grille-mounting location on a 'Stang and their dependency on ambient air, non-chilled 'coolers are really behind the eight ball when it comes to dramatically reducing intake-air temperature -- especially on searing days.

Enterprising 'Stangbangers use small shots of nitrous oxide plumbed into the intake airstream of their supercharged Steeds as a way to give air-to-air 'coolers a little help and eek more horses out of their blown combinations. While it's a method that certainly does work, we recently conducted a cold-air test that highlighted another process, namely spraying liquid carbon dioxide directly on an air-to-air intercooler's core.

Design Engineering Incorporated's CryO2 Intercooler Sprayer Kit (PN 080108; $541.52) brings this CO2 "freeze" technology to supercharged 'Stangs in the form of an all-inclusive package designed for small- or large-sized, air-to-air intercoolers. The kit, which we installed and worked with at GTR High Performance in Rancho Cucamonga, California, actually proved to be a more-effective, cost-conscious strategy for improving the intercooler's efficiency.

So that's your brief overview of the details that lie ahead in the following photos, captions, and dyno and temperature information. Read on and learn how cryo cooling is a great option to consider (over nitrous) for your blown Pony's air-to-air 'cooler.

Horse Sense: When it comes to pre-'11 Mustangs, just trying to keep up with the mega-impressive Coyote 5.0s is becoming a tall order. As many of you know, thanks to the addition of Fox and '01 Bullitt project 'Stangs, our pre-'11 upgrade game is pretty tight. So while keeping up definitely isn't easy at this stage in our wonderful hobby's life, believe we're now working harder to stay on top of the latest and greatest for late-model 'Stangs. 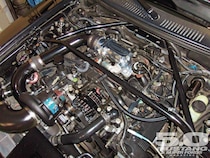 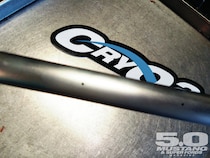 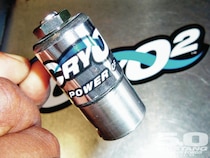 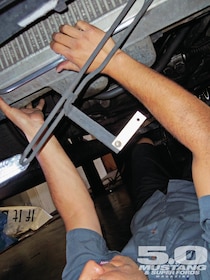 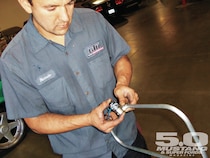 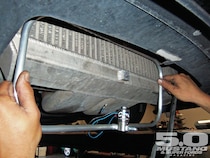 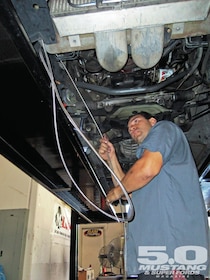 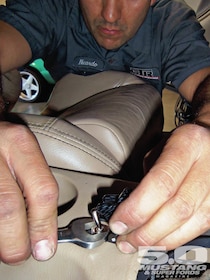 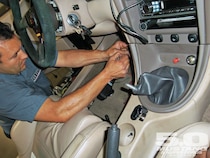 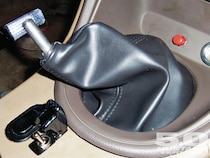 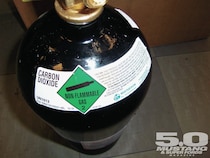 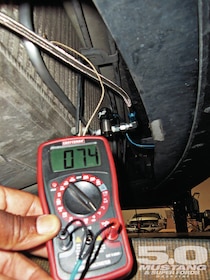 While horsepower and torque increased when CO2 was sprayed on the intercooler, the stat to note in this dyno graph is the Inlet Air Temperature. The IAT data in our study is the actual value measured and recorded by the sensor and ECU in Oscar Zavala’s Mustang GT. With a short shot of DEI’s cold CO2, IAT dropped roughly 13 degrees. After making real-world tests with the CryO2 setup, we thought it would be cool to make a glory dyno pull to see the performance change after the engine and blower had a significant amount of time to cool, and carbon dioxide is shot at the intercooler. The glory run is ranked against our best result with CO2. While IAT was lowered only an additional 4 degrees, boost, power, and torque jumped dramatically in the glory hit with CO2.

After installing the system on Oscar Zavala's Vortech-blown, '01 GT (which takes about two-and-a-half hours with no need for exotic changes to the 'Stang or CryO2 components), we learned through dyno and heat tests that spraying liquid CO2 on an air-to-air intercooler definitely enhances the 'cooler's efficiency and promotes power, torque and boost gain.

However, despite enabling the intercooler to transfer heat better, we also noticed that the spray-cooling process is somewhat short lived, especially when it's used manually. Using a throttle-position-style activator is probably the most optimal method of triggering the CryO2 system for use on the dyno, or high-end freeway blasts and such.

When firing the unit with a button, the drag-race environment is perfect for cryo-cooling an air-to-air intercooler. A couple of shots right before staging a supercharged Pony is a sure way to leave the line with big steam.