KJ Jones
February 1, 2013
Contributers: KJ Jones, KJ Jones Photos By: KJ Jones
You can’t do anything but applaud Mustang enthusiasts who are game for making performance enhancements to their brand-spankin’-new Coyotes. Jay Tucker of JLT Performance immediately bolted long-tube headers, 72-lb/hr injectors, and a Roush 2.3-liter TVS on his 5.0, and welcomed us to a dyno session that debuted JLT’s cold-air-induction system on a Roush-blown ‘13.

At this point, you'd have to be freshly awakened from a long, hard sleep to not be aware of the phenomenon that is Coyote mania. Yes, the '11-'13 V-8 Mustangs have been the talk of 'Stangland for nearly three years. We've done more than our due-diligence to stay at the front of the pack, when it comes to checking out the new hotness, and giving you the first look on these pages.

This report involves another exclusive in our Coyote coverage; an effort that started as a simple install/dyno test of JLT Performance's all-new, carbon-fiber CAI for Roush-supercharged '11-'13 Ponies (for Tech Inspection). It briskly evolved into a full-on tech feature story after an innocent suggestion to "play around" with different blower pulleys, air/fuel ratios, timing parameters, and Shell's wicked-new race gas.

JLT's founding father, Jay Tucker, owns the Gotta Have It Green '13 GT we're working with on this one. The Pony was fitted with the aforementioned Roush 2.3-liter supercharger (that was on Jay's '12 Pony) mere days after Jay took delivery of the car, and showed only 900 miles on the odometer when we strapped it on the Dynojet chassis dyno at All Aspects Motorsports in Chesapeake, Virginia.

So follow along with our impromptu and seriously fun experiment, which culminated with a total power gain that's true impressiveness was made clear by Roger Dean's innocent question: "How much horsepower did those original 5.0s make?" Check it out.

Horse Sense: We love meeting Mustang enthusiasts, friends, and loyal 5.0&SF readers from all over the country. Your scribe's two-week, 1,200-mile romp between Pennsylvania and Virginia included a reunion (after almost 20 years) with Roger Dean, of Virgina Beach, Virginia. He's a longtime hot-rodding friend who tagged along during our visit with JLT and made the profound observation about the outcome of our experiment. His estimation speaks volumes about how cool some of the things we do with Mustangs and the dyno really are. 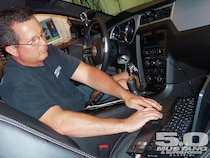 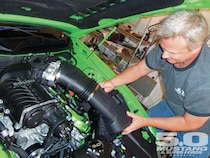 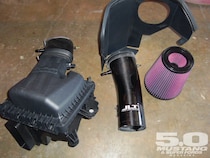 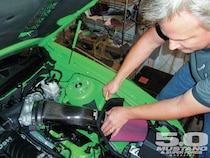 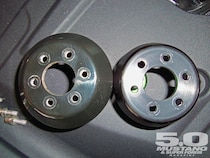 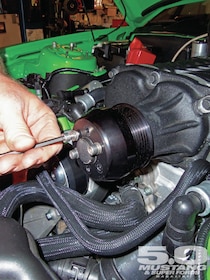 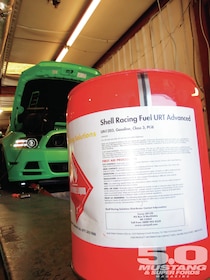 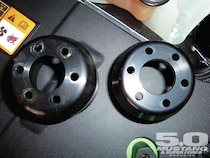 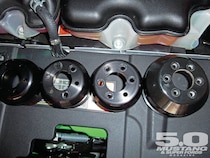 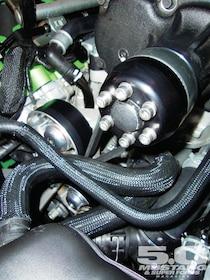 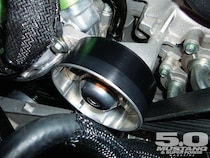 The 72mm supercharger pulley still experienced slight slip above 7,000, so the 74mm pulley was ultimately called into service. It produced our final and highest rear-wheel horsepower/torque values without belt slippage. There’s no doubt that with a Boost-a-Pump and continued use of Shell’s URT Advanced fuel, the 69mm or 72mm wheels would have put Jay’s Pony in the 700-horsepower zone with no problem—even with slight belt slippage. 5.0

As the graph and chart show, the incremental and total amounts of horsepower and torque that were gained are epic

This entire project was conducted on the Dynojet chassis dyno at All Aspects Motorsports in Chesapeake, Virginia, all in the course of a few hours.

As the graph and chart show, the incremental and total amounts of horsepower and torque that were gained are epic. After simply experimenting with the most-basic, hop-up pieces that can be installed on a supercharged Coyote we gained big power.

As pointed out by Roger Dean, we essentially gained more power than the bone-stock, first-gen, carbureted 5.0s (140-157 flywheel horsepower in ’79-’82 engines) had, and not much less than the 175 horses of mid-’80s pushrod bullets that followed.