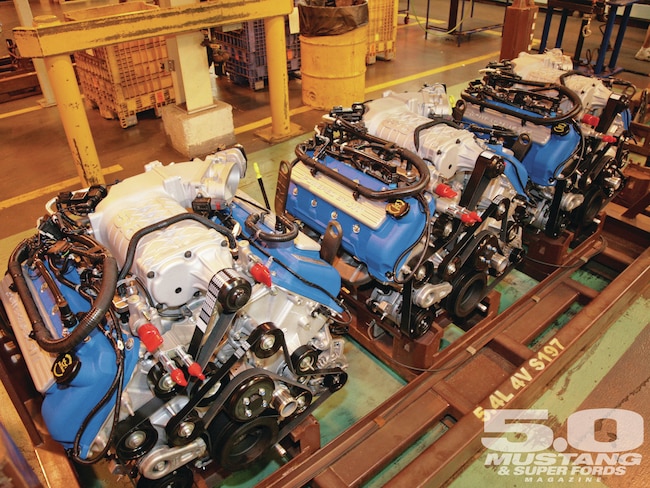 Walk through the front door of the Romeo Assembly Plant, then travel through the lobby, past the offices, and into the facility. As soon as you hit the floor, you're surrounded by the cacophonous whir of machinery moving and workers assembling. Cylinder heads rush by, part bins fill, and people assemble 6.2-liter Raptor engines.

If you are looking for GT500 engines, they aren't here. Keep walking till you reach the back door and hit fresh air. Just a short walk away, the door swings open to a wonderland. Familiar sounds of classic rock music are punctuated by the zip of automated tools and accented by good-natured conversation. This is a special place. This is where the baddest engines are born. This is the Romeo Engine Niche Line.

"The Niche Line is flexible and we can adapt to changes in product quickly," explained Team Leader Cary Kramp. "Since 1996, this line has built several different engines based on the 4.6/5.4 architecture. 4.6 Two-Valve (gas and NGV), 4.6 Four-Valve, and 5.4 Four-Valve. Commonization of engine-mount bolt patterns makes it easy for us to build just about any of the new architectures as well. Typical setup time for a new product on this line is totally dependent on the logistics of engine parts and some special tooling that is mandated by the product. Without major changes in product, we can build multiple different engines side-by-side." 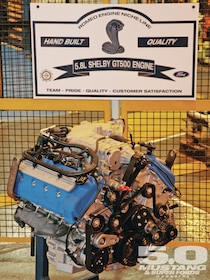 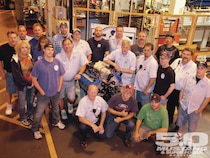 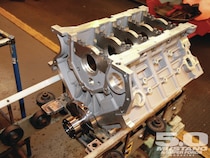 If you are a longtime 5.0&SF reader or a student of Blue Oval performance lore, you know this place is legendary. It was formed in 1996 to construct the then-exotic 305hp Four-Valve 4.6-liter engine destined for the '96 Mustang Cobra. In the following years, the Niche Line has produced a storied assortment of engines, from the Terminator 4.6, the Ford GT 5.4, the Shelby GT500 5.4, and the Ford Racing Cobra Jet 5.4. That is an impressve lineage of horsepower.

"The highest-volume engine built on the Niche Line has to be the Terminator engines for '03-'04 SVT Cobras," Cary said. "...It had to be close to 12,000 per year for two years. Then we went into the lowest-production engine ever built out here, the Ford GT. We built 4,075 of them in two model years." While the true stars of the show are the two-person build teams, these days they lavish their experienced touch on the 662hp Trinity 5.8 engines that power the top-of-the-line '13 Shelby GT500. We have covered the latest GT500 ("Make It Rein," Sept. '12, p. 40) and its engine ("Power of Three," Mar. '12, p. 44) in great detail on these pages, so it seemed like it was time to take another trip down Ford's most specialized assembly line.

"When a new person comes to the Niche Line, they are placed with an experienced team of builders for a minimum of two weeks for training (30-40 engines built during this period). This is where the two-person team really starts to shine," Cary explained. "The two-person team allows us to do a few things that one person would take a lot longer to do. The two-person team consists of a Builder and a Support Person. The Builder handles all of the tools and torques every fastener. The Support Person collects and sets up all the parts for the engines as they follow each engine from start to finish. When an engine is complete and the team begins the process again on a new engine, they switch positions. This ensures that every Niche Builder learns the entire engine." 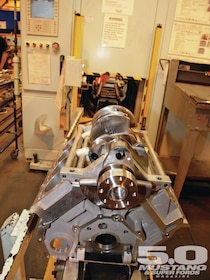 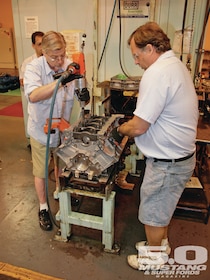 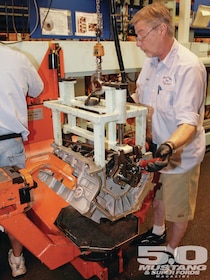 Not only are the teams highly trained, but they benefit from each other's experience. "...The rapport that comes naturally over time between two-team members that work together. The teams talk it up much like a sports team during each engine build. They ask each other questions and basically make sure they know that the build is progressing correctly, and nothing looks or feels different or incorrect," Cary added. "Obviously, this takes some time, and eventually it becomes second nature. This rapport really drives ownership and quality in every engine!"

Obviously this is a special place, where the engines of our dreams are built. It's definitely worth visiting. So take a walk down this elite line with us to watch the most powerful production engine to date come into the world.

Horse Sense: The Niche Line has been a well-oiled machine since 1996, but its engine volume varies based on the number of specialty cars built. These days, eight two-person teams construct up to 30 engines a day. Back in the Terminator days, however, 17 two-person teams delivered up to 55 engines per day. 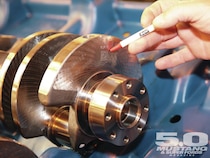 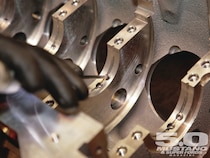 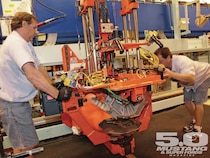 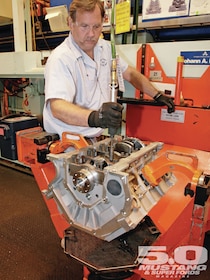 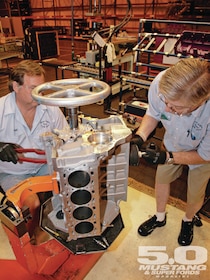 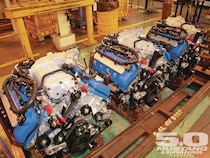