Evolution Performance Pulls Out All the Stops! 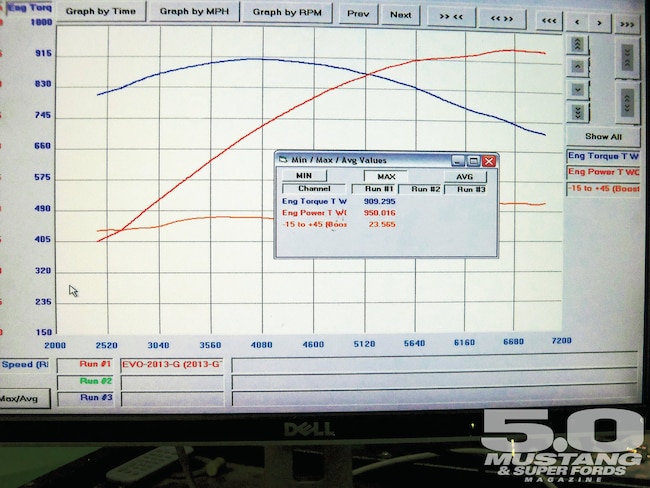 Our never-ending technical exploits continue this month with a project that solidly supports Editor Steve Turner's staunch position about late-model Mustangs: "They're made to be modified!"

Yes, while keeping a Pony stock is one way to go, we are all about making changes--subtle and not-so subtle--which is one reason why we really appreciate Fred "The Idea Man" Cook, Nelson "The Shoe" Whitlock, and Chuck "The Wrench" Wrzesniewski of Evolution Performance. Oh, and don't forget Jon "The Wizard" Lund of Lund Racing, who is the braintrust behind calibrating ECUs in almost all of the mega-powered Ponies that Evo develops. Radically augmenting the supercharged Four-Valve engines that power '11-'13 GTs, Boss 302s, and '07-'10 Shelby GT500s, then pushing those modded Ponies on the chassis dyno and dragstrip, is the Evo crew's trademark.

We're sure veteran 5.0&SF readers and those enthusiasts who follow forum chatter and Mustang videos on the Internet, are familiar with many of the benchmarks that Evolution-prepped ‘Stangs have set over the last five years. Chris Cruz's 2011 King of the Street-winning '11 GT has had the distinction of being the big dog in Evo's pound since May 2012. It stopped the time clocks at Maryland International Raceway in 8.99 seconds. The shop's new focus is its latest acquisition, the Grabber Blue '13 Shelby GT500 that we introduced in our Oct. '11 issue ("To The 9s," p. 78). In typical "Fred form," a plan for hopping up the Shelby was drafted long before the 5.8-powered 'Stang arrived at Evolution's Aston, Pennsylvania, headquarters. 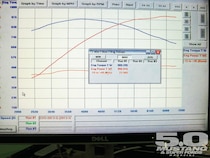 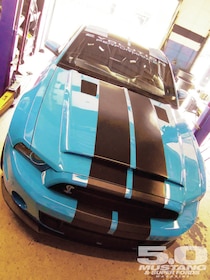 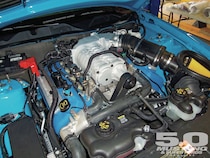 Steve's report focused on a series of bolt-on upgrades and their dyno-test results, which definitely are impressive in their own right. With this effort, we're going far beyond the bolt-ons and straight for the gusto by strapping Kenne Bell's massive 3.6-liter Mammoth twin-screw supercharger onto the stock Trinity powerplant. Yes, the exhaust system was modified (with long-tube headers) in the last tech outing, and a fragged clutch was replaced with an improved piece since then, but the fuel system and transmission remained totally stock. As always, our objective is to document rear-wheel power and improve on the Evo Shelby's landmark 9.99 dragstrip e.t., which was recorded at Atco Raceway just days after the first round of mods. One of the big differences in Fred's plan for achieving ultimate Shelby performance this time is that the '13 'Stang will not immediately slide down the race-car side of the slippery slope.

"We're keeping this car in street trim, with the seats, carpet, radio, air conditioning, and all other amenities intact," says Fred. "Our first Shelby (Evolution's '07 GT500 was first in the 8s) and the Kona Blue ('11) 5.0 eventually evolved into race cars. Yeah, they both ran 8s, but there's a lot more to be said when a car like Chris's GT does it with a majority of the factory gear still in place." Your author once again ventured across country to document this latest advance in new-era Mustang technology, which took place in July 2012, in the tech bay and dyno cell at Evolution. Our Dream Team's efforts are all conveyed in the following photos, captions, dyno, and dragstrip data. 5.0

Horse Sense: With 'Stangbangers like us and the crew at Evolution, the buck will never stop at simply adding a CAI and tune to a new Pony, and calling it good. That's just the start. A new '13 Shelby GT500 is too potent to leave alone, and it's just natural for us to seek its potential. After reading this report, we bet most of you who share our passion for power will strongly consider following suit ... immediately. 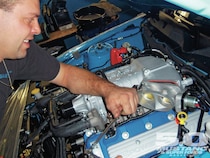 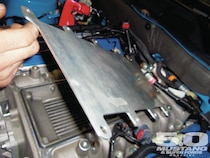 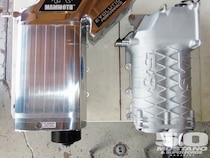 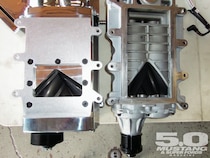 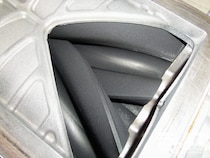 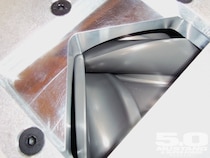 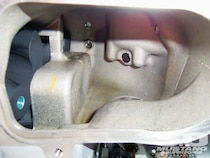 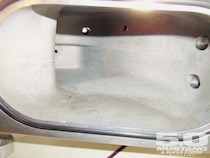 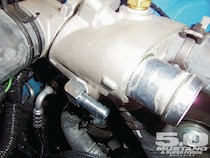 Of course, baseline dyno testing is a required element for this type of project. Since Evolution's new Shelby had been treated to a small assortment of bolt-on pieces prior to this effort, we accounted for the upgrades(JLT CAI, 65mm throttle body, long-tube headers, ATI 15-percent overdrive damper, and calibration) and used the ‘Stang's 750hp/780–lb-ft output as the numbers to beat with the blower upgrade.

The KB showed immediate improvement. With a conservative calibration (only 17 degrees of timing for 93-octane pump gas), rear-wheel horsepower registered 710 at 5,500 rpm, generated by only 18 psi of boost. A full pull (to 6,700 rpm with 19 degrees timing and 19 psi of boost) immediately followed, and the GT500 easily surpassed its best power output (with pump fuel and bolt-ons).

According to Jon Lund, this level of power would be "about it" for earlier-generation Shelbys, as the fuel system would be maxed out, and attempting 21 degrees of timing simply wouldn't be wise with 93-octane gas. Air/fuel for the '13 actually showed as rich during the initial tests, but Jon was confident that power would be in the 800s with fuel trimmed down and additional timing. One caveat in making 770 rwhp horses on the OEM fuel injectors and pumps is the scary fact that the pumps are at 96 percent duty cycle.

"We would probably peg the duty cycle at 7,000 rpm," says Jon. "Just because the fuel system uses dual 5.0 pumps does not mean that the capacity is doubled. So give or take a few horsepower, 790 is about the maximum output with the factory stuff, 21-degrees of timing, and pump gas, and that's unbelievable." The Shelby's twin-Coyote pumps can be run as return-style. Reconfiguring the system as such is a great idea when you want to make even more steam safely.

A pulley change, Shell's URT Advanced race fuel, and more timing earned 4 more pounds of boost and its resultant 950 hp. "Based on the size of the engine and the big-boost capability of the Kenne Bell, it's clear the supercharger wasn't working efficiently with the 4-inch pulley," says Jon. The 3.6's efficiency range is about 17,000 rpm, and with the 4-inch wheel, blower speed was roughly 12,000 rpm at best. The dyno chart clearly shows the difference between the two pulleys.

The calibration for big power really didn't change (21 degrees of timing). However, adding Kenne Bell's 20-Volt Boost-A-Pump provided a little more pump volume, which allowed Jon to increase pressure. "Without the Boost-A-Pump, safely reaching 900-and-anything horsepower would be impossible with the stock fuel system. The injectors are basically screaming for mercy at this point," says Jon. Bigger is better! While this attitude isn't always true when it comes to modifying Mustangs, we definitely endorse the notion if it applies to replacing a '13 Shelby GT500's stock blower with Kenne Bell's gargantuan (3.6-liter) wind machine. The big blower garnered huge results in our landmark test.

As we mentioned earlier, Evolution Performance now has a bonafide "rep" for building up and transforming Ford's latest bad-boy Mustangs into phenomenal ground-pounding beasts. After making record steam on the chassis dyno, the next step in our '13 Shelby GT500 evaluation was all about cutting the Pony loose on the quarter-mile at Atco Raceway. In preparation for this segment, Chuck equipped the 'Stang with a custom 7-quart replacement water/ice reservoir for the intercooler, swapped the OEM front brakes with lightweight stoppers from Strange Engineering, and swapped the stock 8.8 rear with a built unit that contains 35-spline axles.

With a 9.95/142.3 e.t. and mph already in the bag via the factory supercharger, the Shelby responded to the increased power by picking up 0.3 in e.t. (9.65) and 7 additional mph (149). It's important to note that this track performance was achieved in oppressive summer heat with the 'Stang weighing in at 3,854 pounds. We dare to say the 8s are inevitable. Sure, installing an automatic transmission, yanking out the seats and such, or simply adding a dash of nitrous oxide probably will carry the Kenne-blown brute into that hallowed territory. But that's going too far against the grain for Evolution Performance…and for us. Adding a Kenne Bell 3.6 makes this great car incredible. Bolt one on your new Shelby, and you'll instantly be in a great position to tear up the street and the 'strip.