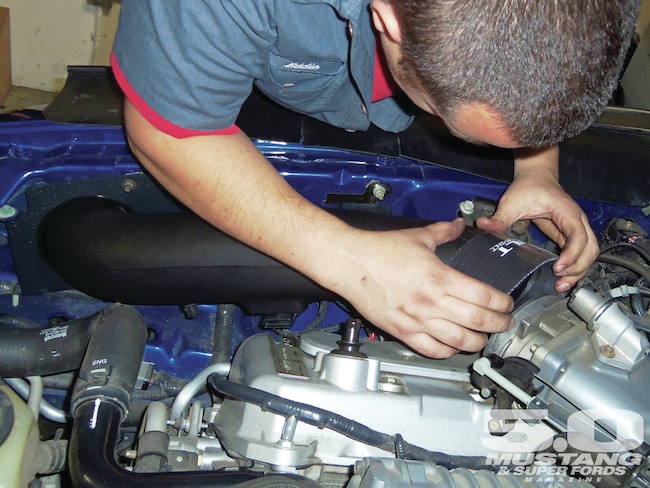 We've extolled the virtues of various cold-air induction systems many, many times throughout the 27 years that EFI Mustangs have been hot. Evaluating cold-air systems is a routine practice for us. Currently, the aftermarket has been working overtime, producing new CAIs for Coyote 5.0-powered 'Stangs. And as these induction kits are introduced, we've been matching them with various other supporting hardware packages.

As you can imagine, with Ford's newest Ponies understandably garnering most of the aftermarket's attention these days, we were pleasantly surprised to learn that JLT Performance is still thinking about 'Stangs of the recent past and developed a fresh cold-air setup for heavy-breathing '03-'04 Cobras. Well, technically, JLT's Next Generation 12-inch High-Boost Cold Air Intake Kit (PN CAI2-12-FMC-0304; $249) is a bolt-on setup designed for Snakes that already possess above-board levels of rear-wheel horsepower (550-600) and torque, such as those upgraded with larger-displacement superchargers.

The system features a one-piece, super-sized, 4-1/4-inch (inside diameter) ABS-plastic induction tube, highlighted by a cool mounting pad for the mass air sensor and a gargantuan, 4-1/2x12-inch S&B Powerstack air filter that sits in a Cobra's passenger-side front fender. Together, these components make up a CAI that does away with the traditional mass air tube/multi-sectioned intake, and creates a single smooth channel for a much cooler intake-air charge (the type of cold air needed for producing 800-to-900 horses at the feet).

While installing JLT's high-boost system is far from difficult using basic tools (the most strenuous task is removing the passenger-side front tire to install the 12-inch Powerstack filter), GTR High Performance technicians Eddie Zapata and Ricardo Topete handled the bolt-on and dyno-test operations for us on a Sonic Blue '03 Cobra.

It's critical to note that this new system's huge air volume, tube size, 90mm mass air housing, and new mass air sensor (SCT BA-2600 or BA-3000) make it completely ineffective without tuning. So, for calibrating this new application, Ricardo turned to Chris Jones at Blow-By Racing, his cross-country ally in Margate, Florida. Chris uses SCT's Advantage III tuning software to fine-tune Mustangs that make big steam. It has become an integral part of GTR's operation creating calibrations for all types of performance-improved Ponies that Ricardo and his team work on.

These photos and captions cover the details. While our test Snake's baseline power is way below the preferred 550hp range for this intake, dyno results confirm that JLT's big-boost kit definitely is a winner, and it's a more-than-viable option for bolt-on Terminators. 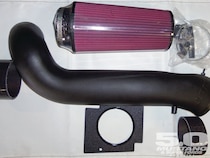 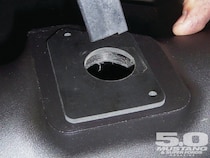 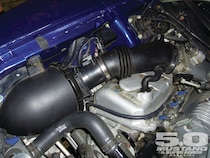 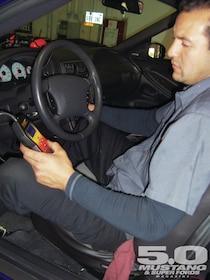 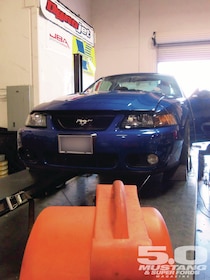 We had hoped to test JLT's new 12-inch Next Generation High-Boost Cold-Air-Intake Kit on an '03-'04 Cobra making substantial horsepower with a bigger supercharger. Unfortunately, said vehicle wasn't available in our time of need, so we elected to bolt the big tube onto a relatively stock Cobra and see what type of effect it has on horsepower and torque. With the air filter relocated in the front fender and the element itself being so big, we were confident the system would help produce impressive power gains, despite its high-boost requirement.

Study the dyno results closely, the impressive gains on a mostly stock '03 Cobra are good indicators as to how well this system will perform on the stronger Snake. "JLT1" represents the JLT Short-Ram CAI that was tested after the factory airbox and inlet tube. Data for the new high-boost intake is listed as "JLT2." We also made one unofficial glory dyno pull ("GLORY") at the close of our test. While all of the data for this all-out hit is accurate, it's important to understand that it was made with the Cobra--and moreso its supercharger--set up for achieving maximum power with the new setup (engine cooled for one hour, supercharger iced down).

The comparison information for this project does not include the numbers achieved during the glory run. While the glory run's 428 rwhp is outstanding for an otherwise-stock Snake, the real data point of interest is the overall boost increase that the high-boost setup promotes, which is measured between the OEM and two JLT systems (without the cooling tricks).

With most "new" performance hardware for '03-'04 Cobras being power-adder systems, the JLT 12-inch Next Generation High-Boost Cold-Air-Intake Kit is a cool and affordable new addition to the upgrade selection for Terminators. We saw it first-hand--this cold-air kit and a Blow-By Racing tune is all that was necessary for a 50hp gain!