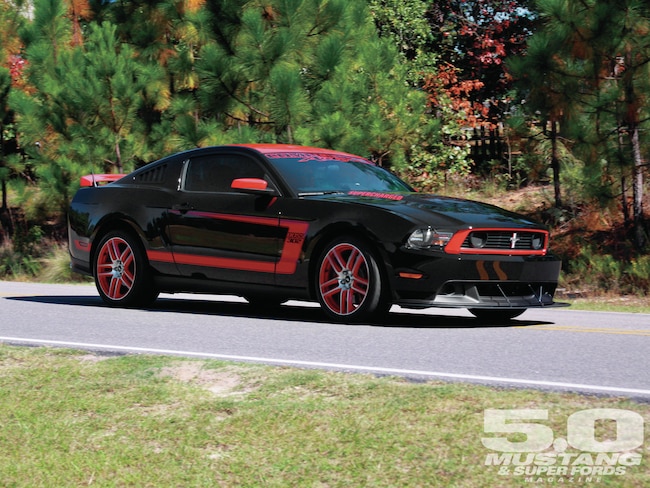 When the RoadRunner-powered '12 Boss 302 burst onto the scene, many people told us that Boss owners were just collectors that were bound to leave the cars stock. That might be true for a core group of Boss owners, but we know that there are some members of the Mustang family that simply can't leave well enough alone. We know, because we are that group. Fortunately for us, Jim Mozingo is one of those guys too.

Jim is definitely not worried about modifying a new and rare Mustang. He showed up at Competition Auto in Spring Lake, North Carolina, with just 57.5 miles on his '12 Boss 302 Laguna Seca. That's right. It wasn't just any Boss 302, but number 269 of 300 Lagunas. That's right--it's a rare one, and as Carl Messenger, the main man at Competition Auto, explained, rare "...wasn't rare enough. He wanted a one of a kind!"

That's where we came into the story. Naturally, we've already boosted and sprayed our fair share of Boss 302s on these pages, but we'd never sullied a Laguna. Of course, that just added a little extra spice. The real draw was that we'd yet to try boosting a Boss with Ford Racing Performance Parts' Whipple supercharger kit. That's just what Jim and Carl had in mind, and they asked if we'd like to follow along. We didn't hesitate.

Naturally, this sort of madness is nothing new to Carl and Competition Auto. The shop is located near the Fort Bragg military base, and we know our brave members of the military love to drive fast cars when they are on leave. As such, Comp Auto sees a number of high-power Mustang builds, including "a turbocharged '07 Shelby GT clone with over 700 rwhp," Carl explained. "We have done several 800-plus-horsepower GT500, and, of course, our 1,600hp GT500!" 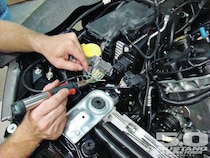 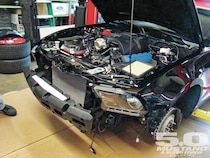 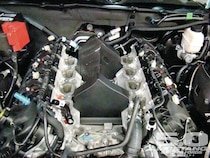 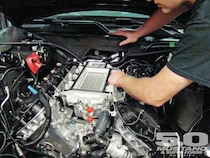 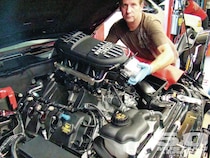 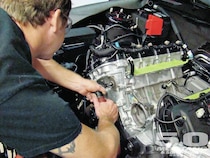 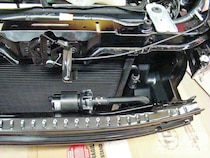 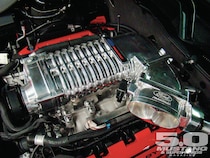 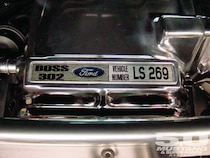 From the outset, Jim planned to add the FRPP kit to his factory-fresh Laguna. "We have a good relationship with Ford Racing and Whipple," Carl said. "That relationship combined with the extremely positive results we have had in the past with their products means we highly recommended this kit."

Other than adding a GT500 purge solenoid into the mix, Competition Auto installed the kit as delivered, and the results were quite impressive from just the blower alone. Of course, that was only the beginning, as they took the combination right up to the limits of the fuel system with exhaust and inlet mods.

As you can probably tell from looking ahead at the dyno sidebar, the results of maximizing the RoadRunner for boost were impressive. "The car was strong before, and a great, purpose-built, street-legal open-track car." Carl raved. "Under normal driving you would never know anything has been modified on the car the driveability is just as before. But when you get over half throttle, the difference is almost indescribable. It pulls like nothing I've ever driven. On the first drive after tuning, I ran Fourth gear to over 100 mph and it was still pulling like a freight train."

So, if anyone asks Jim why he'd modify his Laguna, that's the best answer we can think of. When a guy that drives a 1,600hp GT500 says it pulls like nothing he's driven before, you can't get a better endorsement.

Horse Sense: The Corkscrew is the most infamous corner on the Laguna Seca track that provides the namesake for Ford's rarest and raciest Boss 302 configuration. This trickiest of corners offers a combination of lefts and rights along with a drop in elevation. It was a daunting one during our trips around the track, and making it all the more daunting, you actually aim for a tree to stay on line through the turn! It was a blast in a naturally aspirated Laguna, so in a boosted version it would be crazy. 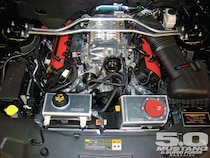 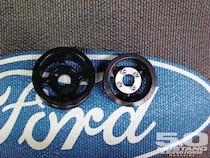 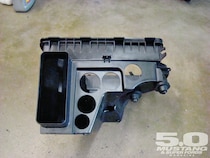 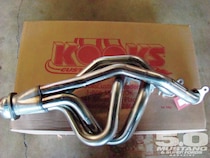 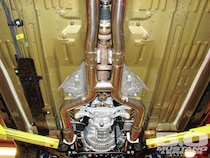 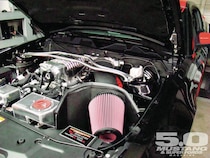 What's better than an ultra-rare '12 Boss 302 Laguna Seca? One that puts over 650 down to the pavement, of course. You simply have to love how the RoadRunner just gobbles up each modification. From adding boost with pulleys to opening up the inlet and exhaust, Competition Auto was able to gain horsepower and torque in measurable chunks. The adding of the FRPP supercharger with the throttle body and custom tune bolster the Laguna with 163.17 more peak ponies. Swapping on a smaller pulley and modded air box added another 24.73 at the peak, while the full exhaust tacked on 34.83 at the peak. Clearly there was still an inlet restriction despite the big throttle body and modded air box, as the 127mm JLT Big Air intake delivered a massive 67.30hp peak gain. In total, these additions added nearly 300 horsepower to the feet. That gives you an idea what better breathing can do for a built Coyote or a stock RoadRunner.

Clearly there was still an inlet restriction, despite the big throttle body and modded airbox, as the 127mm JLT Big Air intake delivered a massive 67.30hp peak gain