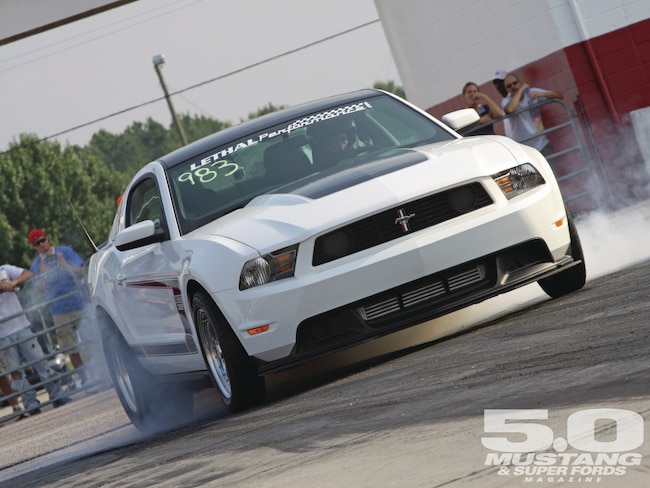 It takes a brave bunch to tear into a new Boss 302. Not only is it a premium model, but it carries a bit of history. As such, there are purists that would prefer a Boss remain stock forever. We, of course, prefer to examine its potential. Obviously, the wild bunch at Lethal Performance agrees.

"...There are many that don't like the fact that we took the car down the dragstrip. There are also those that don't understand why we modified it. They believe the Boss should be kept just how it came from the factory and that it's only meant for the twisties," explained Jared Rosen of Lethal Performance. "Our view is slightly different. Even though it's a Boss and has a little more history to it than a regular 5.0 GT, to us, it's a great Mustang platform that begs to be pushed to its limits in all aspects."

Regular readers know the Lethal Boss was already modified on these pages ("Boss Flog," Nov. '11, p. 98). When we last left this Boss, it had rocked the rollers to the tune of nearly 600 hp thanks to a host of bolt-ons and a generous dose of Zex nitrous oxide. With this combination of parts, the '12 Boss 302 covered the quarter-mile in 10.64 seconds, putting this white Boss in the record books as the first one in the 10-second zone.

Of course, when it comes to a Lethal Mustang, the story isn't going to end there. Busting into the 10s was just a start.

Besides garnering attention and logging in some quick times, the premise of any good shop project is to see how various products will impact the performance of a Mustang. While the Boss is certainly a special ride, it is but a more robust version of the more attainable Mustang GT. As such, testing various products gives the Lethal crew up-close-and-personal experience on how to best modify a modern Mustang. After starting with a handful of easy mods, it was time to make a major move.

While Lethal is perhaps best known for building positive-displacement-blown 'Stangs, it seemed a bit like sacrilege to remove the signature Boss intake manifold just to add power. Moreover, the whole make-up of the Boss engineùstrong internals and high rpmùseems tailor-made for a centrifugal supercharger.

"Before we purchased the car, we were thinking of what we could do with it. Our initial thoughts were to keep the Boss manifold in place and do a custom twin-turbo setup," Jared added. "The problem is that it's difficult to offer a system like that in numbers we'd need where everything fits right, so we went with the next best option, which was a large centrifugal."

It seemed like the right time to call one of the oldest names in the centrifugal gameùVortech Superchargers. Of course, at the time, Vortech didn't make a kit for the Boss. Moreover, Lethal didn't want to just install a base kit on its Boss. As such, Lethal dialed up an '11 Mustang supercharger kit with a few notable options. Most importantly, they opted for the biggest supercharger that will fit in the bracketùa Vortech JT-Trim. Additionally, they added the Competition Air Inlet Upgrade and the MaxVolt fuel pump booster.

As you'll read, the combination of the Vortech and the Boss proved formidable. Name a car that you can basically double its horsepower output by adding a supercharger and have it live. Well, the answer is a Boss 302. Of course, the basic Vortech kit is set up to spin via a six-rib belt, which has limited how much boost Lethal can throw at the Boss. Vortech is developing an eight-rib system, so this story isn't over yet...

"It was a great feeling to be the first to step into the 10s," Jared said. "Any time you take a new car like this and are the first to run a good time, it not only draws attention to us, it also shows the community how versatile and powerful the car can be. Take it to the road course, take it to the strip, or just on the street, but take it out and do some workùthe Boss is meant to be flogged!"

"We'd first like to see the car go 9s with the blower and stock suspension," Jared added. "After that, we'll replace the tires that Vaughn Gittin Jr. tore up and get the car ready for the road course. After that, who knows? Someone at Ford did mention something about the '13 GT500 being worth a look..."

For now, check out the captions to see how the install and dyno test went down at Power by the Hour in Boynton Beach, Florida.

Horse Sense: The Lethal Boss made its boosted quarter-mile debut at Darlington Dragway during Mustang Week, and with hot shoe Jeremy Martorella of UPR Products banging the gears, it clicked off a 10.31 at 132.41 mph. "The Boss feels like a purpose-built carùthe suede-grip steering wheel and the tightly wrapped seats gave me the impression that Ford was serious about the Boss. I had heard the engine had stronger internals and beefier valvesprings. Given these advances, Jared told me to rev it up," Jeremy said. "Where the GT falls off, the Boss keeps charging. With the intake and valvespring change, the Boss had no problem revving to 8,000 rpm."

With a new Vortech on board and a fresh tune from Jon Lund (www.lundracing.com) in the SCT Xcal 3, it was time to spin the rollers. Obviously we had high hopes for the combination of the JT-Trim and the high-winding RoadRunner. However, even we jaded magazine types were impressed by nearly doubling the 302ci engine's output. It starts coming on in the midrange, but as the tach starts pointing to the shifter, this combo is a monster.

"The horsepower numbers left me speechless with the Vortech install," hot shoe Jeremy Martorella said. "Jared made me take a guess at what it made, I shot high and said 750. I couldn't believe over 800 with a factory engine! The first test session in Darlington, 110 degrees in the shade would prove to be a big damper on the much awaited track times."

Power by the Hour tried several different pulley combinations to find the right mix of grip and boost. Moreover, the team at PBTH added a belt idler to the mix and modified the belt tensioner for greater adjustment. These mods allowed the six-rib belt to kick out the jams on the dyno. On the racetrack, however, the belt slips a bit on the top end. At this writing, Vortech is developing an eight-rib conversion kit and Lethal is sourcing an overdrive crank dampener from ATI, so there will be more boost, more power, and quicker e.t.'s in store from this combo.

"To make over 830 rwhp on the stock motor with just the addition of a supercharger kit, some tuning, and an off-road mid-pipe is impressive," Jared raved. "It just shows what a good job Ford did with this car and how easy it is to mod. Once we're done at the dragstrip, we'll be taking it out on the road course for some fun." 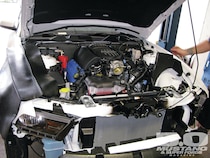 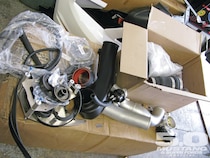 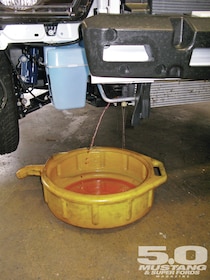 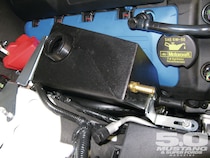 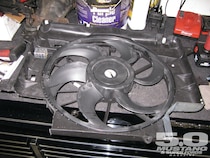 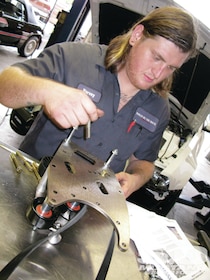 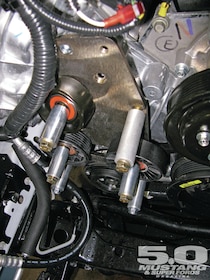 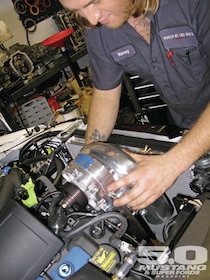 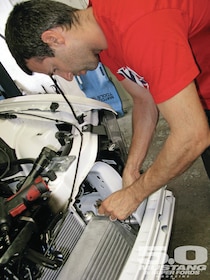 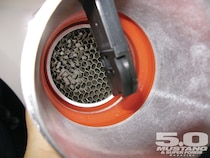 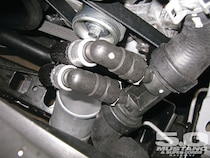 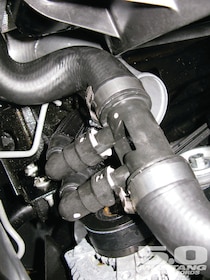 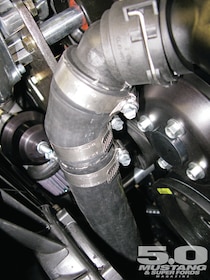 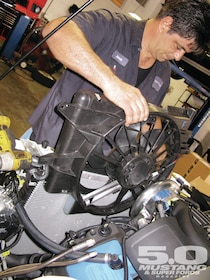 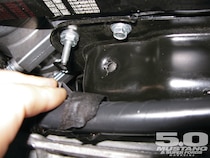 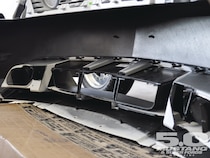 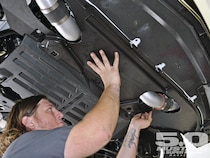 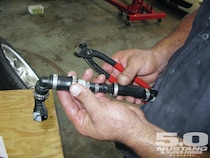 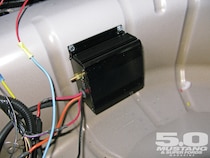 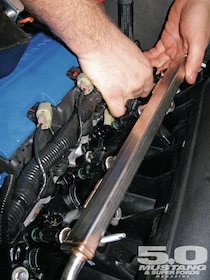 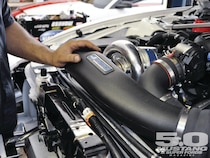 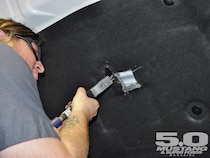 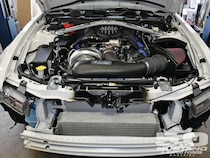 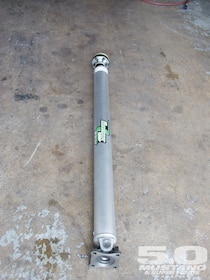